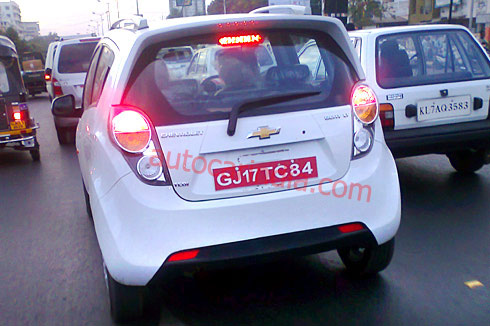 We have always been big fans of the beat. The little Chevy offers chic styling, great engine, great interiors and great ride quality – all at an unbeatable price. The two things that have stopped the car from selling as much as it should (it sells more than 3000 units a month) are:

a.) The brand bashing that GM got during the recession
b.) Lack of a diesel option, as pointed out several times by the company’s India head Kar Slym several times

Also, it’s no secret that the company is planning a diesel variant launch for the Beat by June 2011. Now, for the first time ever, the car has been caught testing in Fatehgunj, somewhere near Vadodara by one of the Autocar readers (come on Motoroids, we can do such things too, more often). The diesel Beat may just turn out to be a game changer of sorts with its 3-cylinder diesel engine which is going to be extremely fuel efficient. Also, looking at the Beat’s current price, we can be very sure that GM India is going to price the new car very aggressively. If we read it properly, warning bells have already started ringing for the likes of the Swift DDiS and the Ford Figo.

The pictures don’t reveal much difference from the current car, at least on the outside, except for the TCDi badge. The Beat diesel according to us will be one of the most important launches of the year, and if GM India prices it at the speculated 4.4 to 6 lakh rupees, it’s going to make sure that GM India’s plants start running on full capacity almost instantly.