When Kawasaki reincarnated the rotting EX250 into the new Ninja 250R the whole world sat up and took notice. And when the bike landed on the Indian shores last year, our biking fraternity was more than elated, for at last, a true blue quarter-litre multi-cylinder motorcycle had arrived. But that was not the end of it. Since our market has been deprived of a large variety of motorcycles, almost every new high-capacity bike that’s launched educates us about a new genre of motorcycles. Like the R1 taught us what a litre-class ‘super-sport’ machine is, while the ‘busa introduced us to the idea of a ‘sports tourer’. Similarly, the Ninja 250R put forth another genre – the ‘learner’ bike. 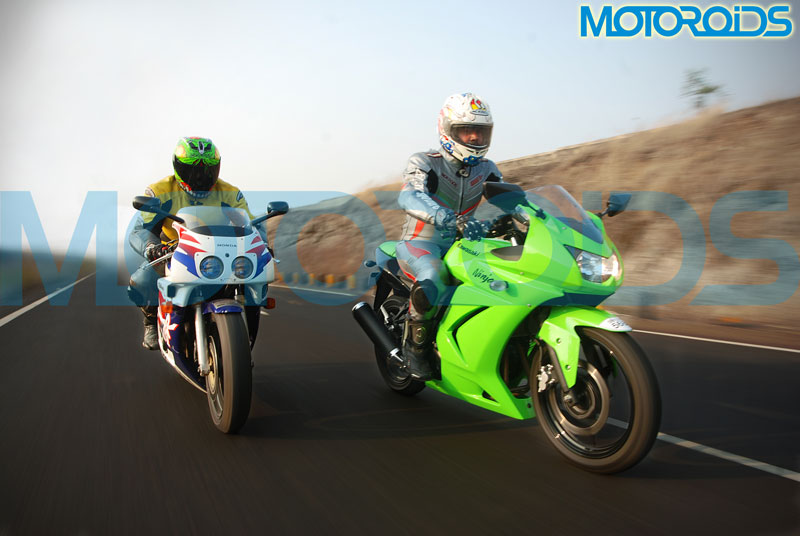 As the name suggests, a learner bike is a motorcycle that’s easy to come to terms with, is easy to maneuver, has a power-band that’s easier to absorb than glucose and which prepares you to tackle higher capacity motorcycles when you are ready for an upgrade.  In the case of the Ninja though, it’s not just any other learner bike, but an entry-level track tool that promises to teach boys and girls alike, the concept of circuit racing. This sort of a low capacity track focused machine has been absent from the product portfolios of the motorcycle makers for over a decade now – with the last notable learner bike for the track being the Honda CBR400RR. And that brought us to an interesting question. With over two decades worth of generation gap between the 250R and the 400RR, has the technology progressed enough to make the little green Ninja a better all round proposition than the BabyBlade? Lets find out…

While looking for a clean example of the 400RR, we stumbled upon an immaculate 1991 model. This year of manufacture made it fall in the NC29 category (the earlier models being stamped with a NC23 classification). What made this bike special in its era was the technology it was laden with – its inline-four cylinder engine had gear driven cams, gull-wing shaped swingarm, aluminum bean frame chassis, large carburetors, 17” wheels etc. In fact when the NC29 came onto the scene in 1990 most of its technologies hadn’t even graced that era’s 600 or litre-class machines in the market. More importantly, the CBR400 was one of the first bikes to bear the double-R tag, which stands for ‘Race Replica’ thus making clear its intentions of being a potent track tool!

The NC29 lent these technologies and a lot of styling cues like the twin headlamps, jelly-bean body form, mass centralization and bodywork sculpting to the first ever ‘Fireblade’ – a series that revolutionized the way litre-class track machines progressed from then on. It was after the introduction of the CBR900RR in 1992, that the NC29 too got the proud ‘Fireblade’ tag (and also the ‘BabyBlade’ nickname) and the legendary White-Red-Blue splash graphics similar to the actual Fireblade. The Ninja that we decided to pit the 400RR against is the 2010 fuel-injected model that is available for sale in India.

Even with a design language borrowed from the current generation of Ninjas, the 250R doesn’t make the CBR400RR look all that dated. Yes, the two round head and tail lamps, the comic font for the ‘CBR’ lettering and the psychedelic graphics on the 400 aren’t exactly 21st century – but still have enough substance in them to wring the necks of the onlookers as they go ‘oh ****’ looking at the stationary bike. The fat 150-section rear tyre adds the extra oomph factor that one likes from a sports bike a compared to the Ninja’s 130-section rear tyre, which looks nothing bigger than that of a Pulsar 220.The CBR400RR’s design is a clean execution – like the rear footpegs for example; since you are not going to need them frequently, they fold back cleanly below the rear fender as if they never existed. 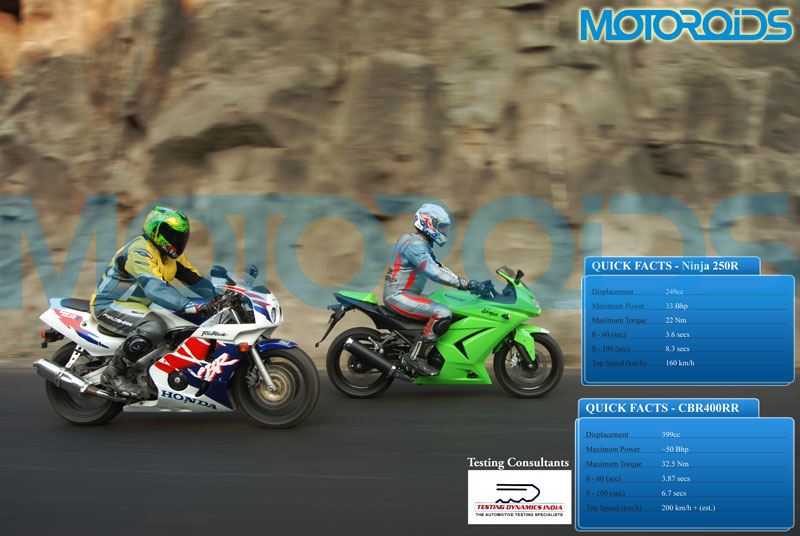 The support frame for the visor and rear-view mirrors is slim, follows safe organic curves and doesn’t protrude like similar units on other 400cc machines of its time. The 17” wheels, the ‘bucket’ seat and the upswept chunky tail give the 400RR a sporty low-slung stance while the large fuel tank adds further to the big bike feel. The Ninja on the other hand sports a smaller tank, and a comfortable (and roomy) rider seat, but in turn ends up looking like a full faired street bike than a focused track tool. Since we are talking about entry-level track tools here, the 400RR’s peg-seat-handlebar geometry is better suited for high speed cornering as compared to the comfortable posture of the Ninja.

Well-endowed women or fat bikers like me however may find it difficult to fill into the RR’s narrow seating space and will hence feel more welcome on the Ninja’s saddle. But speaking of women in general, the 400’s low seating allows even a five feet tall rider to comfortable rest her or his feet on the ground – completely flat!

The Ninja 250R without doubt is a potent cornering machine. Its lightweight construction gives it the kind of agility that even Rossi can vouch for. The 400RR on the other hand can feel like a baby elephant until you get used to it, thanks to the high footpegs, large bodywork and heavier mass. But once you put some track time under your belt you will realize that the 400RR is lot easier to lean into the corner, thanks to the better weight bias. The large tank aids in hanging off the bike as it lets you lock your arm against it when getting your knee down. 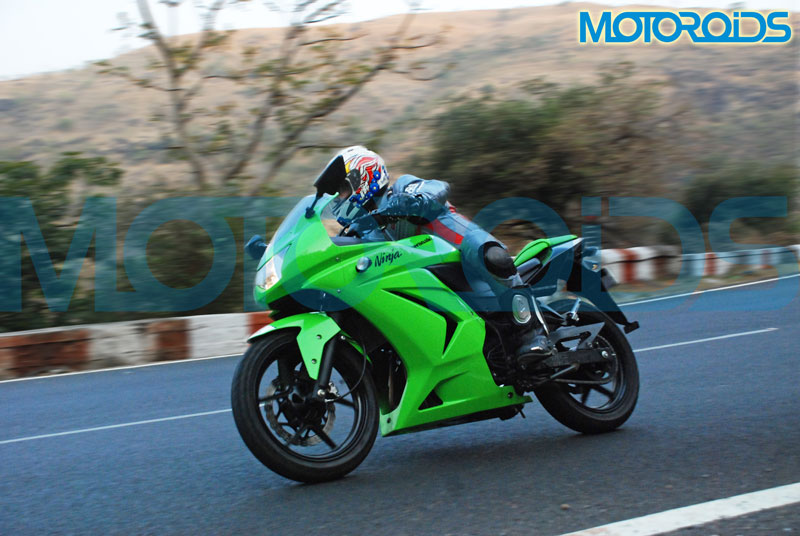 The RVF400 inspired large, flat seat aids sliding off the saddle furthermore. The 400RR employs a mono shock absorber mated to the Gull-wing swingarm to provide the rear damping. The RR uses a stiffer setup for precise handling and hence loses out on comfort when tackling bumpy roads during those weekend getaways. But fortunately, the shocker is adjustable for damping which makes life somewhat easy. The front employs conventional telescopic forks that are steered by one of the best clip-on setups I have used till date.

Even with the absence of a steering damper, we hardly had any problems negotiating the bumpy highway stretches and speeds over 160 km/h. The Ninja too has one of the best suspension setups in the business and given its relaxed riding position we talked about earlier, makes for a more comfortable vehicle when its comes to ride quality. Handling wise the bike’s smaller size imparts more confidence in a newbie, but as the rider starts getting better with every lap, the 400RR offers a lot more learning material – thanks to the extra (almost double) power.

Speaking of which, lets get to the engine. The 400RR in its NC29 guise produces a little over 50bhp at a peaky 11,500 rpm. What this translates into is a meaty yet controllable midrange. What that means is that the 400RR is a tamed beast when negotiating a corner and once at the apex the BabyBlade hands you over enough firepower to achieve the kind of corner exit velocity that can shame even today’s litre class baddies! 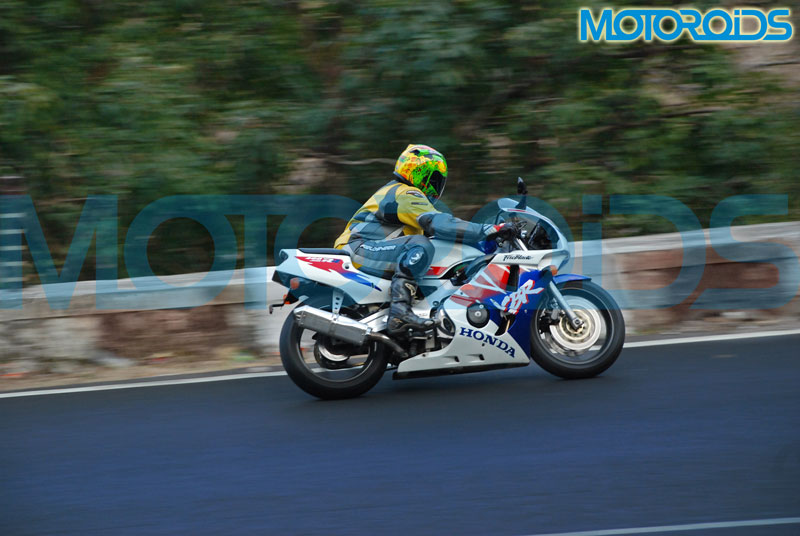 And why I say firepower is because when the NC29 executes everything that I just said, it will scream louder than a cannon blast. The Ninja’s exhaust note on the other hand sounds like a kitten trying to roar like a lion! The 400RR’s first gear stretches almost upto 100km/h mark and will achieve this figure in a mere 6 seconds (on a new bike). The bike accelerates all the way to a ‘mechanically’ restricted speed of 180 km/h. The interesting part however is that the top speed restriction comes into play as per the position of the speedometer needle!

So a simple km/h to mph converter is enough to remove the speed limiter and allows the RR to achieve speeds up to 225 km/h – that’s the kind of top speed most 600cc machines were restricted to even at the start of the 21st century! Even after 19 years of mechanical wear on it, our test bike was hardly a few microseconds off the company’s claimed timings – which in itself speaks for Honda’s much talked about reliability over other bike makers.

Technical specs and features apart, when you put forth wads of cash to buy such precision machinery, you are also looking at an experience that justifies the whole exercise. The Ninja as we mentioned in our earlier tests, is one of the best (and probably the only) quarter litre bikes out there. But I personally feel that the bike is too mellow. Though it performs exceptionally well for its cubic capacity, it doesn’t demonstrate a zest to compete. 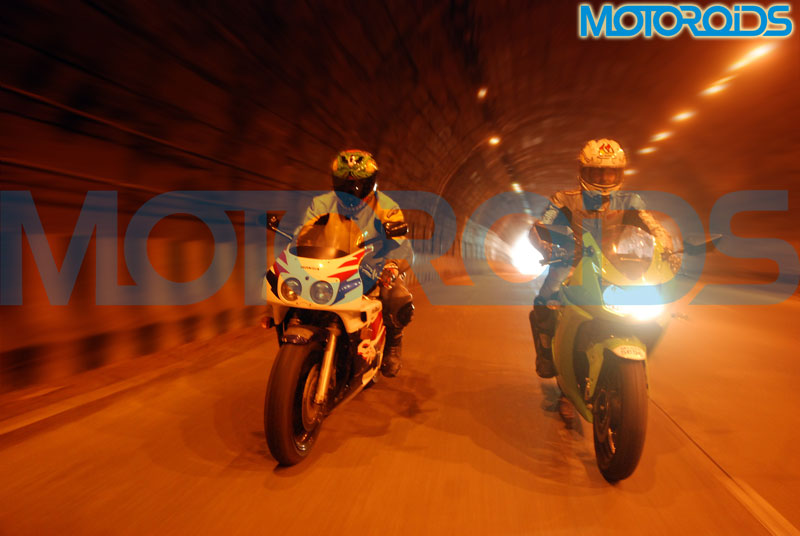 Its silent exhaust note makes it look like a destitute kid muted by the atrocities of some environmentalists. The powerband, though err, powerful enough, is as expressionless as a butcher’s cold eyes. Contrary to these little shortcomings, the 400RR comes across as a bike that is dyed in the psychedelic ‘90s and which hallucinates itself into believing that it’s a litre-class junkie. It will shout it out while you make an entrance – even if the needle is hardly tipping the 40 km/h mark. It may not have a powerband enough to break your neck, but has more than enough grunt to encourage you to go faster with every passing lap.

Your spine won’t chill with fear when you are entering a corner, nor will a distant spot suddenly turn into a truck in the blink of an eye.  At the end of the day the 400RR gives you the experience and the pride of owning a ‘superbike’ while negating most of the risks involved. It has so much flamboyance and eagerness to perform that for a second one tends to forget that the bike is over two decades old! 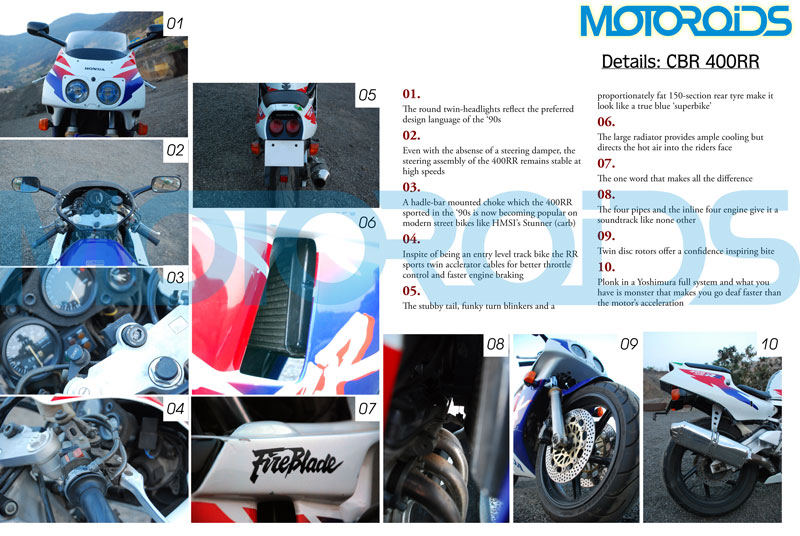 And that brought us to the golden question – which is a better learner bike then, the 2010 Ninja 250R or the age old CBR400RR? Well, the answer is simple. Yes, the 400RR even after a 20-year generation gap, is in every mechanical way a better learner bike for the track than the 250R – its just a little bigger in size, a whole lot faster in corners and straights, a lot more cooler with its looks and exhaust note and most importantly – more forgiving! What’s more, a DRI cleared legal 400RR will cost you almost the same as a brand new Ninja 250R.

So is the 400RR the bike to buy over the Ninja? Yes! Contrary to my answer, self-proclaimed experts will tell you that finding spares for this 20-year classic is a major hassle. Well, it’s not exactly true. The 400RR was imported in Europe in such high numbers that many dealers still stock spares in plenty – so finding what you need in this internet age isn’t much of a ‘hassle’.  Should you drop the bike and need any of the bodywork then even Thailand can be your savior for it was one of the most lucrative markets for the 400RR after Japan. 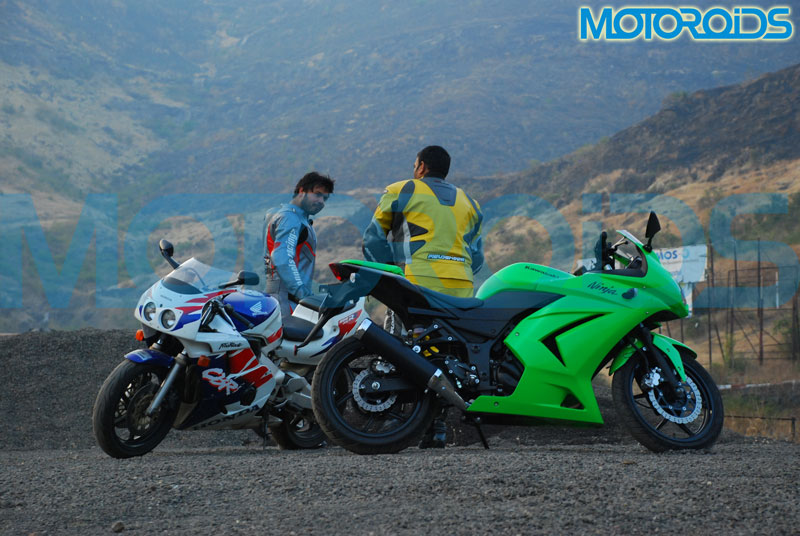 And should you be one of the more lucky learners who do not drop the bike but like any other biker will need the basic wearable necessities like clutch plates, spark-plugs, brake pads etc. then you will be surprised as most of the 400RRs wearable components match those of other Honda/Hero Honda machines like the CBZ and the Karizma! The Ninja on the other hand comes with comprehensive insurance, engine warranty, authorized service network and most importantly, easy availability as compared to a CBR400RR.

What it doesn’t come with however is the innocent insanity, the feel-good factor, the power, the focus and the capability that not just make a true sports bike but also a true sport rider – and all these facets are a part of the CBR400RR, making it our obvious choice.