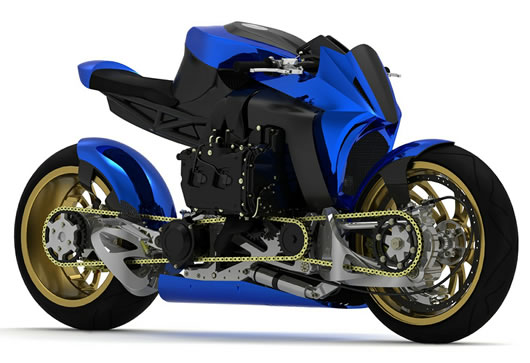 Ian McElroy has developed this radical looking motorcycle powered by a diesel engine. Ian had earlier made a petrol version of the Kickboxer using Subaru’s WRX engine. He later realized that there was diesel engine available from the Japanese manufacturer which was compact and more fuel efficient. This made Ian instantly get down to develop a diesel version of his Kickboxer motorcycle.

With the diesel engine’s compact dimensions, it was not difficult for Ian to make the engine fit into the bike’s frame. Then he went on to differeniate the diesel bike from its petrol predecessor with a new bodywork, new swing arms, and a different turbo. And then, just to add some more novelty he decided to equip the bike with AWD. And thus, the two chains you see in the pictures transmitting power to both the wheels.

Lightweight, with a composite bodywork the bike features an under seat radiator, front mounted intercooler, LED lighting, and under engine turbocharger.

In Ian’s words, “I designed the model to be accurate and realistic enough to build a real bike from. If I had the money I could take the CAD files straight to a machinist, and have the parts made today.”

We’d love to see this bike in production. What do you think?