Home Features Covini C3A is a 6-wheeled supercar for Goodwood 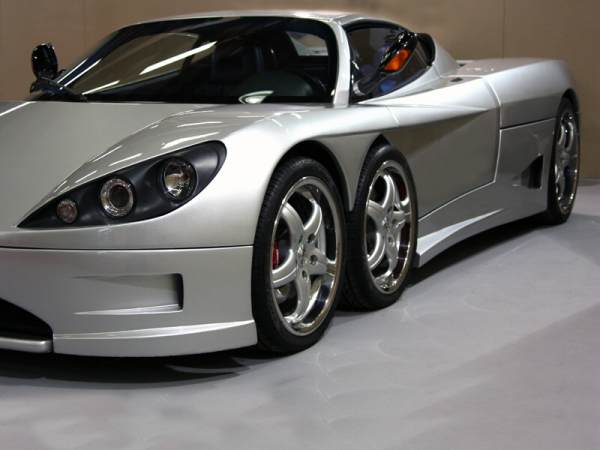 The chances of you having seen something of this sort are quite bleak. All of us have seen trucks which have as many as 48 or more wheels. But this one is a car, a supercar at that, and it has six wheels!

Covini C3A is the first 6 wheeler supercar to receive and invitation to Goodwood Festival of Speed. And just as you must be wondering right now, the company’s stall at the show was thronged by people asking … why 6 wheels?

Gianluca Covini, the brain behind the prototype explains that, for performance enthusiasts, four front wheels offer the ability to get around a racetrack faster than ever before as better traction offers higher cornering speeds and deeper braking, particularly when the pavement is slippery or less than ideal.

The C3A is powered by an Audi 4.2 litre V8 that produces nearly 500bhp, and with its weight kept to just 1150kg using a tubular steel frame and a lightweight carbon fibre body, the Covini C3A is capable of exceeding speeds of 300kph.

The six wheels have other advantages too. For starters a front tyre puncture will not cause the vehicle to lose control. 6 wheels provide more stopping power with four front discs and four tyre treads to transmit the force. 6 wheels offer better directional stability and higher cornering speeds than a four wheeler. Finally the Covini feels more comfortable than its 4 wheels rivals, thanks to less unsprung weight at each wheel, that allows the suspension to control wheel movement better and guarantees more evenly distributed reaction forces in the suspension.
Covini is also working on a Speedster and an Eco version of the supercar, which will be a petrol electric hybrid.