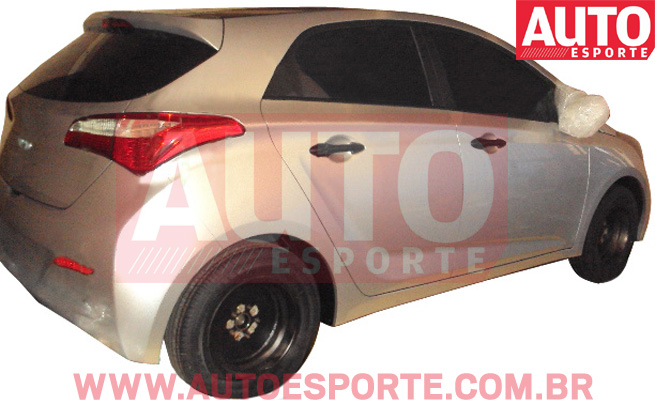 Brazil seems to be the hub of action for Hyundai cars these days. Repeatedly, we have been getting news on new Hyundai models being tested in the South American country. We very recently reported to you when our friends at Noticias Automotivas managed to take interior pictures of the new i15 hatch, codenamed the Hyundai HB. The interior pictures were preceded by the exterior images of the car, taken on two different occasions, although heavily clad and camouflaged.

Now another Brazilian mag, Autoesporte seems to have the clear, undisguised pictures of the new volumes warrior from Hyundai. What you see in these pictures are the first undisguised images of the car, to be positioned between the i10 and the i120, and we must say it carries forward the recent flamboyance exhibited by Hyundai in great style – if the pictures shown by the Brazilian website really are those of the New Hyundai i15 that is.

The website claims to have gained access to these pictures from sources close to Hyundai in Korea. Draped in Hyundai’s Fluidic Sculpture clothing, the HB looks like sporty car at the first look. The front forward stance, the sharp lines, the elongated and swept back headlamp, the chiseled treatment given to the front and rear bumpers, everything points at dynamism and raciness. The front of the car, in particular seems to have drawn heavily from the recently launched Fluidic Verna. Like all the new Hyundai cars, this one too carries the signature hexagonal grille.

With the new HB or i15, Hyundai is training its guns on the VW Gol, the most successful car in the history of South America. The new car is reported to be powered by two engines, a 1.0liter basic version, and a 1.6 liter premium version with all the bells and whistles. Both engines are said to be capable of running on flexible fuels – which mean you can either run these engines on pure petrol, or an 85% mix ethanol.

Now Brazil is a market known for these biofuels, but such is not the case with India. In India, when this car arrives, it is expected to be powered by the 1.2-liter Kappa2 petrol powering the i10 and the 1.4-liter diesel engine currently propelling the i20.

So what do you think? Does the new i15 look good enough to you as a direct competitor to the Swift? Do let us know…