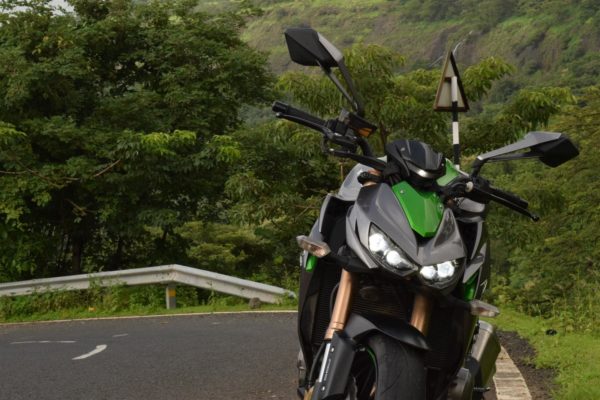 The 2014 Kawasaki Z1000 needs no introduction since it stormed into the super-naked segment with a dynamic changeover. With its crouching predator stance, the new Z1000 took the radical street fighter design to a completely different level. And then that stonking 140 bhp motor eager to make you go bonkers from ridiculously low rpm is an absolute beauty. 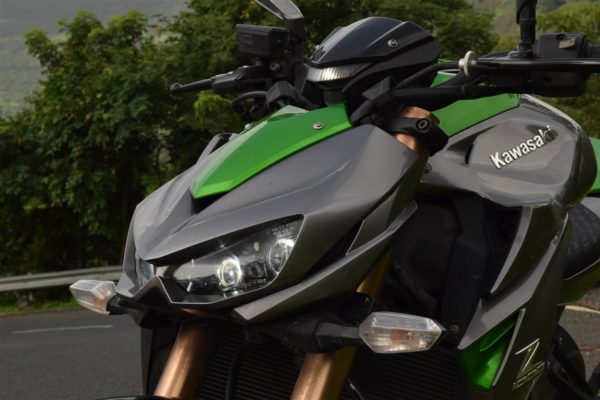 Pure lust draped in green, the Z would make you yearn own one. I had been already smitten by the Z since the time I got my hands on it the first time (read the review here). I still reminisce the pain when I had to drop the bike back to Kawasaki’s Wakdewadi dealership. Uncertain whether I’d get an opportunity to date the beauty again, I never ceased to long for the lucky day. 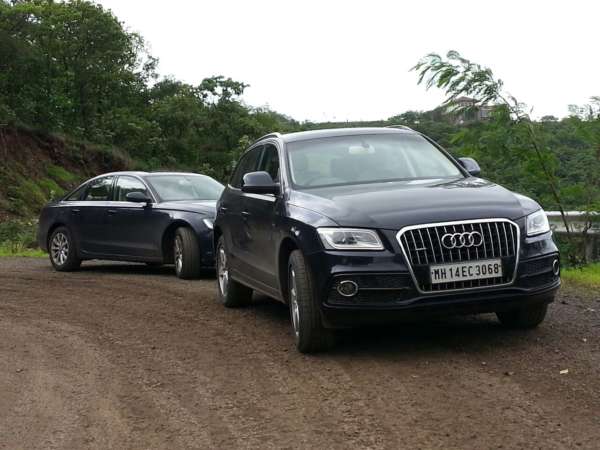 The 68th year of Indian Independence was fast approaching and plans were made to commemorate the special day. Team Motoroids was all set to ride from Mumbai to Pune, later passing through the little town of Paud towards Tamhini Ghats. With the vehicles provided by Audi India comprising of the Q5 and the A6- our Captain-in-charge decided to take the off-beat track from Tamhini towards Amby Valley. 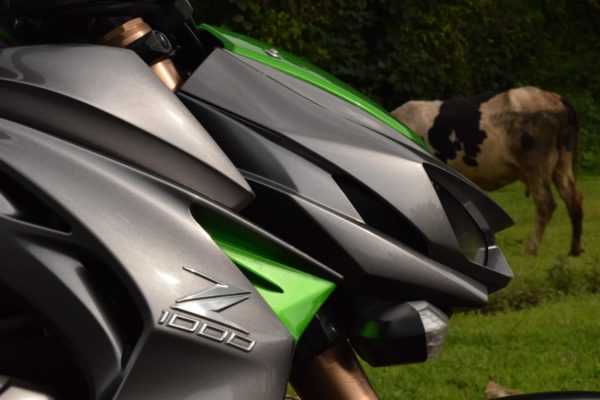 Being an eternal biker, I don’t prefer being caged in such lovely weather and wished for my own set of two wheels. The suspense was well kept till the penultimate day with me guessing badly of my ride for the day. I was in no mood to trot around on a 150cc motorcycle chasing down the two Bavarians- I wished for something that would be on par with the Audis. And our very generous Captain pulled out an absolute zapper on me! After numerous pranks played by the team, it was the Z1000 all set to strike (through my heart) once again…..Yaaaaaaay!

I was all enthused….my situation was akin to finding lost love again- but seemed like the whole world was against me meeting my sweetheart. A hot sunny afternoon transformed into a cloud burst. Heavy rains, flooded roads with my CBR struggling for grip fishtailing on every downshift. Traffic at toll plazas, a turtle’d tanker on the old Mumbai Pune road diverting traffic to the other lane. Crawling traffic on the expressway and a perennial jam before Lonavla- what could probably go more wrong I wondered. 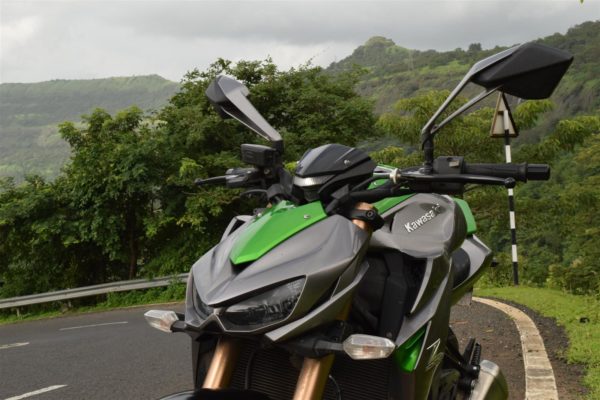 But the devotee of the Z1000 helped me keep cool and eventually I was knocking on Kawasaki’s Wakdewadi doors. The moment arrived. And there it was- waiting just for me. My heartbeat escalated and my hands shivered in eagerness to crank up those four cylinders. And it didn’t take long for me to do so – the symphony of the inline four playing the divine music for my ears. With the show set for the next day- refueling rituals and post meeting a few superbiker buddies, the Z was guided to a safe and comfortable parking space completely hidden under a car’s parking cover to repel curious souls. If possible, I would have loved to spread a mat and sleep next to the parked bike. The aura of the Z1 so contagious- leaving the bike out of sight even for a minute was a painful affair. 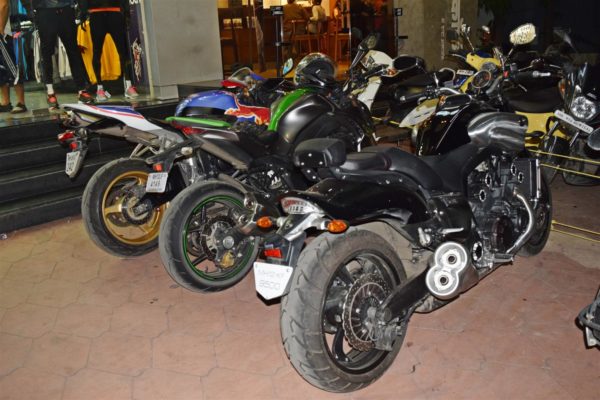 After one of the most sleepless nights of my life, I woke up only to rush downstairs to have a look at the Z and crank the engine to fire me up with vigor for the rest of the day. I wish I could record the exhaust note of the Z and keep it as my alarm tone and wake up every morning to the rhythm of an inline four. Bath and breakfast were all done in a hurry just to save up on time to spend with the gorgeous Kawasaki. Team mate Rohan despite in pain with injury had his moments of adrenalin rush astride as a pillion till we reached the spot where we were supposed to sync-up with the rest of the Motoroids team. Two Audis and a litre class Kawasaki might not make up for a huge convoy- but moving together we were undeniably the stars of the highway grabbing attention from all corners- or maybe the Audis were just mere objects in the shadow of the Z1’s limelight 😉 The cars might have the Quattro badge and the gadgetry to show- but a mere twist of my right wrist was enough to make the Audis feel like hapless souls struggling for speed. 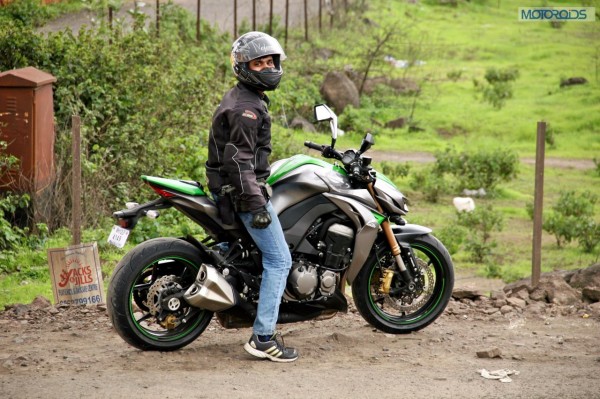 Now, the Z1000 catches attention like a rare few machines, and answering questions of the overawed, inquisitive population begins to get on the nerves after a point. I wish I could simply hang a board around my neck related to the Z1’s displacement, price and mileage. With so much happening around the Z1, the actual ride hadn’t even started yet. The Audis took a detour around Paud through the broken trail while the Z1 was battling the weekend traffic and heat. Thankfully Paud was end of all the misery- half the traffic diverted towards Lavasa and the rain clouds brought respite from the blazing sun god, ensuring a pleasant journey ahead. 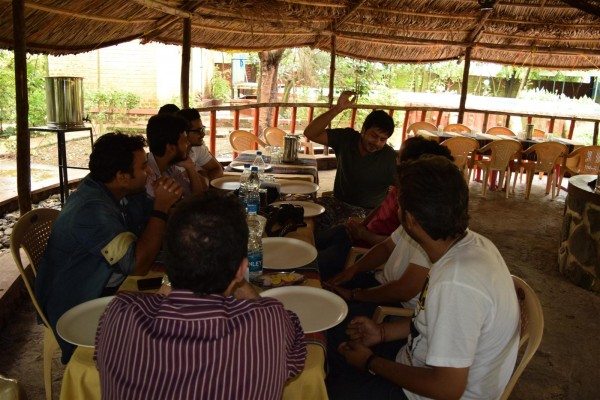 A peaceful lunch gathering followed by rains kick started our expedition. The Audis sped away on the uneven patches and though the stiffly set Kawasaki didn’t feel at home over such surfaces- the resonance out of those four dazzling exhaust pipes compensated for the discomfort. And with that feeling of being at the centre of all attention – only fools would be complaining. 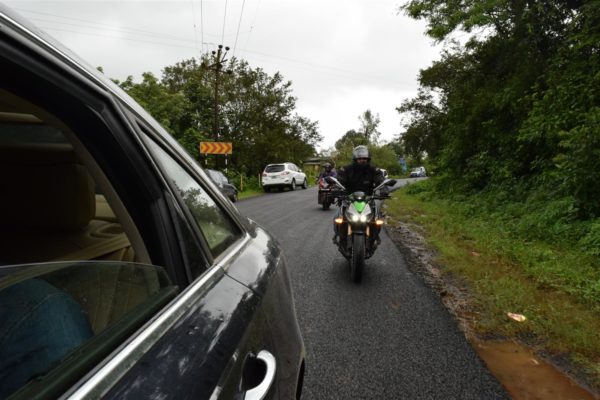 The weather and the picturesque landscape started adding its share to the delight. Despite being hard on the suspension, the Z1 held its own on rough roads with the tyres extending ample bite into the tarmac even in wet and the ABS taking away my apprehensions on loose surfaces. 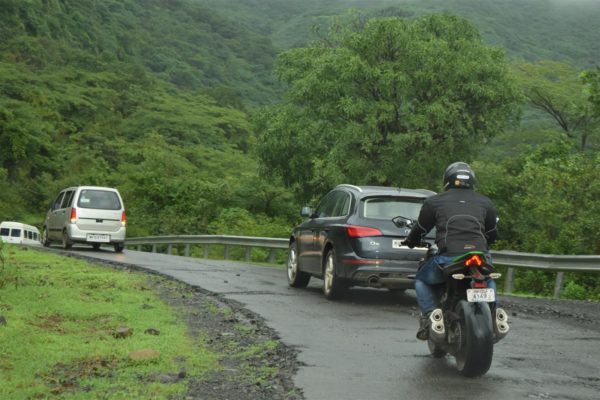 The Kawasaki would make an ordinary backdrop look scenic with its mighty presence, and we at the moment were in paradise. Three exceptionally engineered automobiles blending with nature’s green canvas was indeed a sight to behold and we couldn’t help but stop for a zillion clicks. 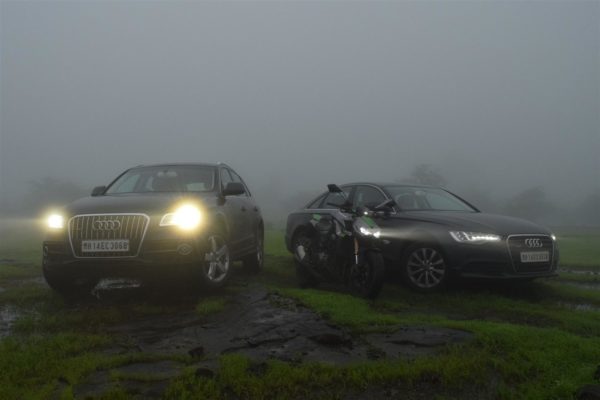 The journey continued passing through heavy showers, puddles and streams- but ample care was taken of the Z1’s low ground clearance. The daytime running LEDs showed their true class riding through darkness brought upon by canopies of trees over the road, and we finally touched smooth tarmac. The otherwise smug passengers of the luxury Audi cars kept hopping out of their cocoons and pleaded like babies to have a spin on the Z1. Being a considerate soul – I simply couldn’t refuse 😉 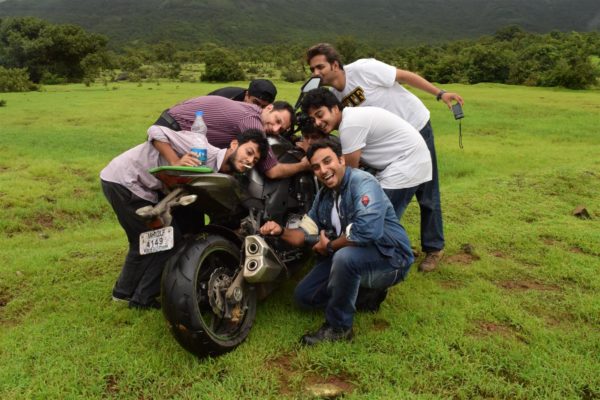 Moving on, the fog ahead added its own charm raising the eye candy quotient of the Z1 manifold particularly its LED shod projectors tearing through the mystery of the misty climate. Cameras were out and the Z1 was clicked from every angle possible and it looked stunning as ever from every position we stood at. 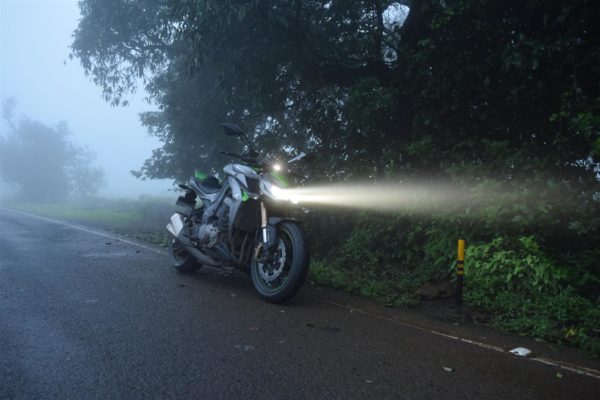 The ride finally concluded at Lonavala with the Z1 squeezing itself out of the usual weekend jam and the Audis taking a couple of light years to make it. The Kawasaki was ridden to Mumbai via the old Mumbai Pune route, while the Audis made it to civilization taking the faster expressway. The Audis might have headed back to rest, but the Z1 had a lot more running to do. Back to the city, the Z1’s attraction graph shot through the roof with me astride it feeling no less than a rockstar. Back home, it was time to put the Z1 for the much deserved rest for the night. 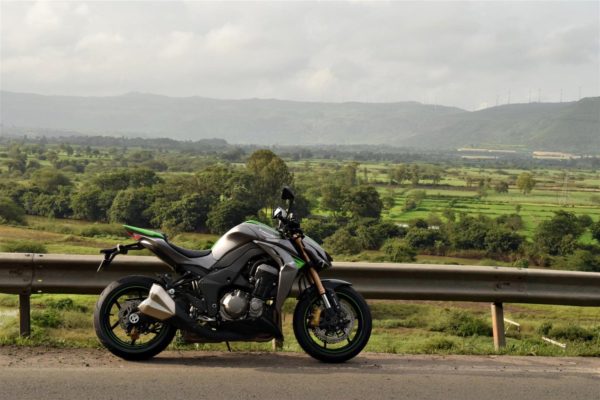 With the Wakdewadi dealership closed during the weekend, the Z1 didn’t see much action and was only taken around the island city for some sightseeing. What followed was an action packed day – no rains, clean dry roads with the sun beating down. If I could probably read the Z1’s mind, I know it would have been in a restless state raring to cut down that 150+ km distance between Mumbai and Pune at speed of thought. Shining as a freshly minted coin post a shampoo bath, it was time to fly back to where we picked the beauty from. And what a treat it was! With the sun reflecting off the deep lustrous paint, the tyres digging even deeper into the surface and with no rains around- the melody emanating out of the pipes sounded even more divine than before. 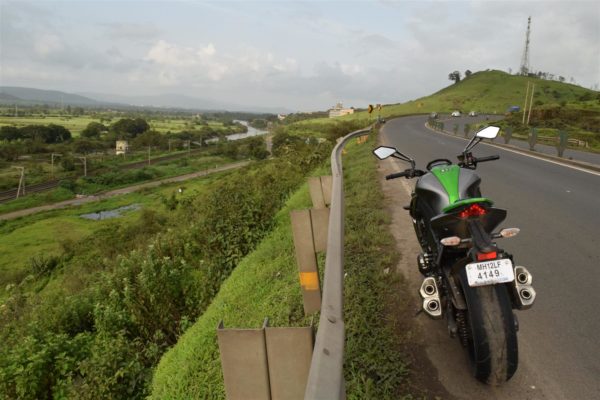 The regret of not having maxed out the Z during our review was still at the back of my mind and with such lovely weather and empty roads- it really was a big temptation! Off the blocks, and the Z1 was screaming in every gear! And we aren’t even thinking about the measly 0-100 figures here. I simply wanted to see what this machine felt like on its absolute limit and exceed what I did with the 2014 Kawasaki Ninja 1000 (read review here).

Without getting into details, which wouldn’t be apt to be discussed here, all I would like to say is that I managed to redline the machine in penultimate gear, just one shift on the cog was needed for my fastest on two wheels- but the traffic ahead seemed to close in real quick. My wrists relax and my heartbeat mellows down. Phew…what an experience! That feeling of the wind trying to chop your head off on a naked bike is just something else compared to going quicker on a faired bike. With the Z ridden to my heart’s content this time – this concluding high speed dash was pure nirvana and a fitting finale to my second stint with a motorcycle that I’m so in love with. 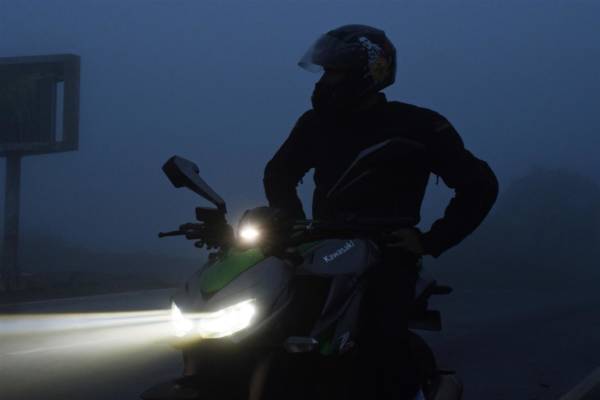 I have never been a fan of naked motorcycles and like every other rider in the country have always been inclined towards the faired models. The Z might not have the electronics (it doesn’t need any), the wind protection or simply the top whack of other track bred litre class motorcycles- but it never fails to enthrall you, even while standing still. 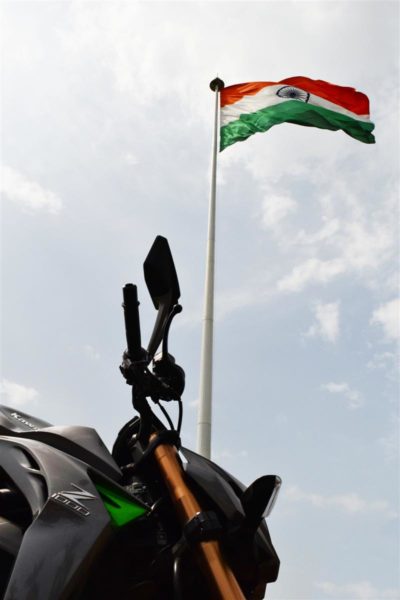 The Z was returned to the dealership and this time with an even heavier heart and even higher hopes of being with it again soon. I just couldn’t thank Kawasaki India enough for the second stint with the wicked but utterly gorgeous Z1000 and it indeed was the best Independence Day ever celebrated in Motoroids style.