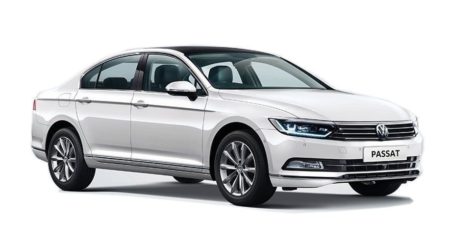 The eighth generation of the Volkswagen Passat was launched in India in 2017. The new Passat gets a bunch of new features with a revamped interior. The car is powered by a 2.0 litre diesel engine mated to a 6-speed dual clutch DSG Transmission. Equipped with Dynamic Chassis Control or DCC, the Passat offers driving modes with suspension damping, a feature which is generally not available in cars this class. Top notch safety features and tons of equipment make the car probably the best in its price range.

The exterior of the Passat follows a basic car design with great proportions. The roof slopes down by some extent giving it a pseudo coupe like appearance. The front gets LED headlamps with beautiful yet aggressive DRLs. The car design is best described as minimalist, yet imposing. The simple design of the Passat makes it stand out in the crowd. The side of the car gets a chrome street on the running boards which go all around the car. The car get 17 inch alloy wheels wrapped in 215 section tyres. The rear welcomes you with a beautiful LED tail lights. The boot gets a sensor which opens up by the movement of your leg below the rear bumper.

The interior of the Passat is just like you would expect from a car at this price point, even better if I may say so. The front dash uses premium materials including a beautiful wood trim and Nappa leather. An analogue watch rests in a panel above the touch-enabled multimedia screen. The screen also acts as a display for a 360-degree camera. The driver can also choose from a variety of angles to display courtesy of the multiple cameras present on the vehicles. The Passat also gets park assist feature which steers the car into a parking space. The boot gets a smart sensor below the bumper which adds to ease of the user.

The Passat is loaded when it comes to safety features. The car, even from its base trim level offers 9 airbags, Auto Hold Function, Hill start assist and Electronic Stability Control (ESC) incl. ABS, ASR and EDL. A 360-degree camera ensures you are aware of your surrounding while backing this rather large sedan up in a tight spot. Moreover, the also comes with an auto-park feature, which would park the car automatically for you in a spot which it finds suitable for itself.

Powering the Passat is a 2-litre, turbocharged diesel motor, tuned to produce 177 PS of peak power at 3,600 to 4,000 rpm and 350 Nm of peak torque from 1,500 to 3,500 rpm. The power is sent to the front wheels via a 7-speed DSG gearbox. This DSG gearbox works epcxeptionally well, providing you a seamless expereince by shifting gears so quickly. The engine's performance is further highlighted by this gearbox which reacts to throttle inputs and selects the right gear everytime.