The legendary BMW HP4 bike is a serious race machine. Equipped with a bunch of electronics and a 215 horsepower engine, this bike comes with a serious price tag. At INR 85 Lakhs, this bike competes with a 2 BHK apartment in terms of pricing, making the bike very exclusive to the rich and elite of our country. That said, the bike does have some serious fan following in our country. Many of them try to mimic the design of the superbike on their own bikes. We present you another example, a, dare I say it, ordinary TVS RR 310 wearing the skin of a BMW HP4. 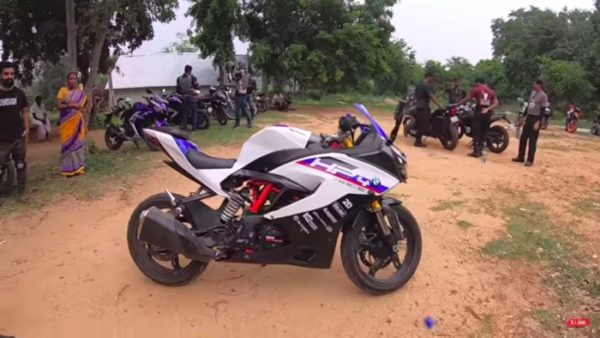 Seen in a video uploaded by N I John on his YouTube channel, this RR 310 gets a wrap imitating the appearance of the BMW HP4 bike. Apart from that, the owner also uses an exhaust system taken from a Kawasaki Z800, which not only looks more appealing but also imparts a distinctive sound to the bike. The owner has spent INR 1,18,000 on the exhaust alone. We must say this bike really looks neat with the wrap job alone, makes it pop out amongst the regular RR310 on the street. The bike also looks the part of a race machine with its beautiful design and one piece fairing. 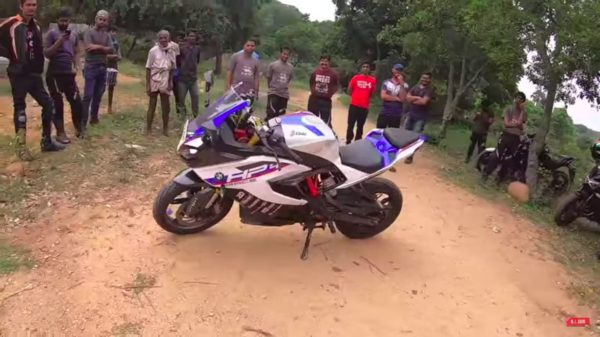 Powering the RR 310 is a 312 cc, single cylinder, liquid cooled, fuel injected, reverse inclined engine which is capable of producing a maximum power output of 34 PS at 9,700 rpm while the peak torque of 27.3 Nm comes up at 7,700 rpm. The engine is mated to a six-speed gearbox. The engine has been developed as a joint venture between TVS and BMW Motorrad and would be shared by both the manufacturers. The same engine powers the BMW G310 R and the G310 GS. Here is the video showcasing the HP4 styled wrapped bikes and yes, they rev the bike up so we can hear the exhaust note coming from the new exhaust system.