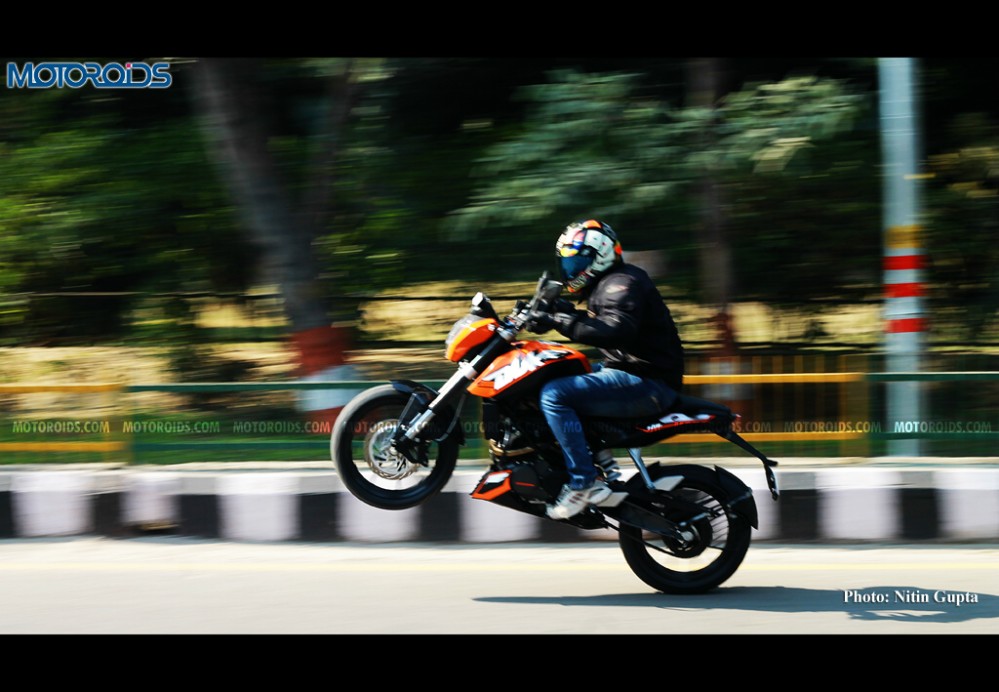 Although we have still not been able to get our hands officially on the new KTM 200 Duke, Nitin Gupta, our lens man in Delhi managed to swing a leg over the beauty, thanks to one of his friends. Here’s his take on the bike, based on his brief experience with the machine.

I attended the launch of the KTM 200 Duke in Delhi, and brought to you enough pictures of the baby from the event. However, not being able to ride it left an itch within me. Luckily enough, I managed to get my hands on the machine recently, thanks to a friend. I rode it for a good 15 km, and now, here I am presenting this quick review to you. Here’s an account of how I thought I painted the town orange in those 15 short kilometers. 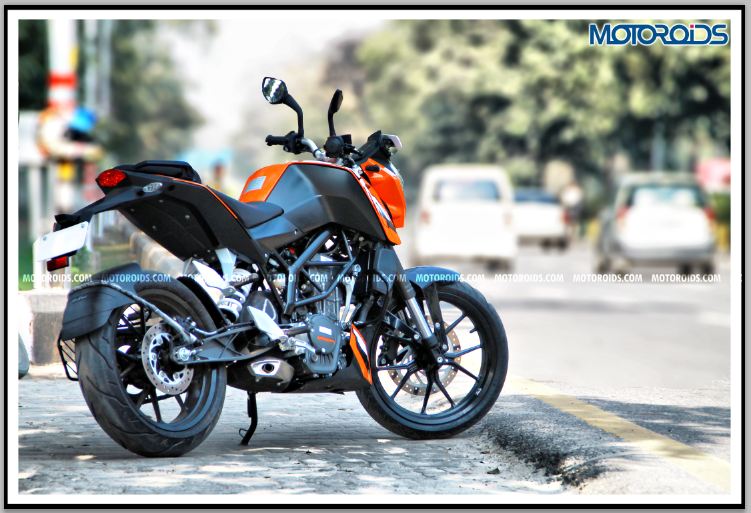 Although I didn’t ride the bike for long enough, there wasn’t any dearth of craning necks wherever I went. The exhaust note too was quite throaty for a 200cc bike and proved to be the icing on the cake – those who couldn’t see it directly, turned around to see, and got surprised on witnessing what was emanating that musical score. Although I shouldn’t be mentioning this, I managed to cross 135km/h on the speedo with the pillion on. Now if something doing those many kilometers per hour for its size doesn’t grab attention, what else would? The KTM is a sure shot showstopper and offers you maximum bragging credits for its price. 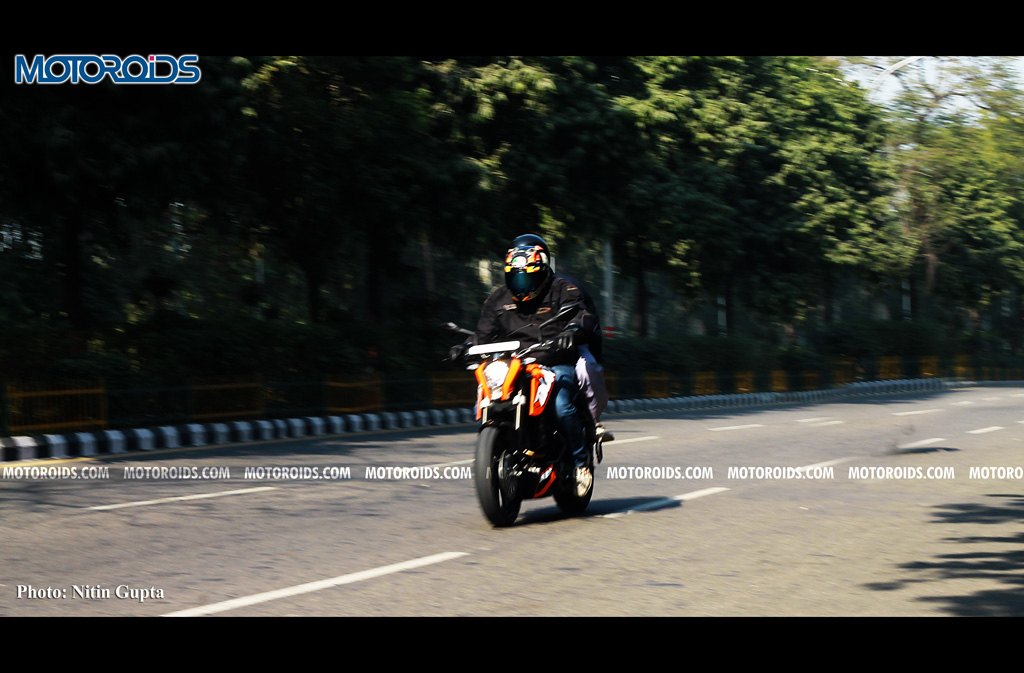 Riding the bike through the bumper to bumper city traffic in Delhi should ideally be a pain in the wrong place. Credit it to my excitement, or to the Duke’s playfulness, but I had a ball finding my way through the narrow openings between four wheelers. Even with a pillion on, the quick flicks through the anarchic urban traffic were enjoyable. Be it a sharp turn to find another way through the bumpers of two cars, or a little jab on the brake and a slight deflection to slip through the narrow street formed between two SUVs, the 200 Duke feels light, nimble and very easily maneuverable. The good thing is that the braking is as confidence inspiring as the quick turn-ins, and you can approach a heap of slowed down traffic at speed with confidence, with the liberty to brake late. Not the best way to go about the situation, but fun, nonetheless. The good thing is that all that nimbleness at slow to medium speeds doesn’t translate into nervousness at higher velocities. The Duke feels planted and sure footed as the rev needle dances up the arc.

If looks could kill!

If looks could kill, this would have been branded a thermonuclear weapon and banned across the world. That bright orange shade, unmistakably KTM, on top of that huge tank is visible from any side, no matter how far you are, and you can easily make out that its ‘The Baby Duke’ approaching you from a distance.

On top of that features like upside down front forks, with around 5-6inches of travel, under body exhaust and the neat little tail lamp make the baby Duke a real siren. KTM Racing inscription on either side of the engine is something for those who possess a trained eye for automotive detail. Broad tires (which are grippy as well) further add to the whole chunky visual appeal of the bike. They are made to look even sexier with a little help from the thin spoke design alloy wheels, further ornamented with assistance from the neat looking aluminum alloy swing arm at the rear. Large disc brakes not only look great, bringing together that whole streetfighter look, but do a great job of bringing this seductive piece of metal to a halt in time as well. With its split seat, small but stylish LED tail lamp and extremely sharp looking LED indicators the baby Duke ensures that it’s aesthetically head and shoulders above any other bike in its segment in the Indian market.

My grouse? I think the blokes at ARAI should be executed for making that hideous looking sari guard a necessity on every Indian bike. Probably it’s the proverbial ‘Kala Teeka’ to make all the beautiful looking bikes look ugly and prevent them from the much feared ‘Buri Nazar’.

A little glitch in ergonomics / finish 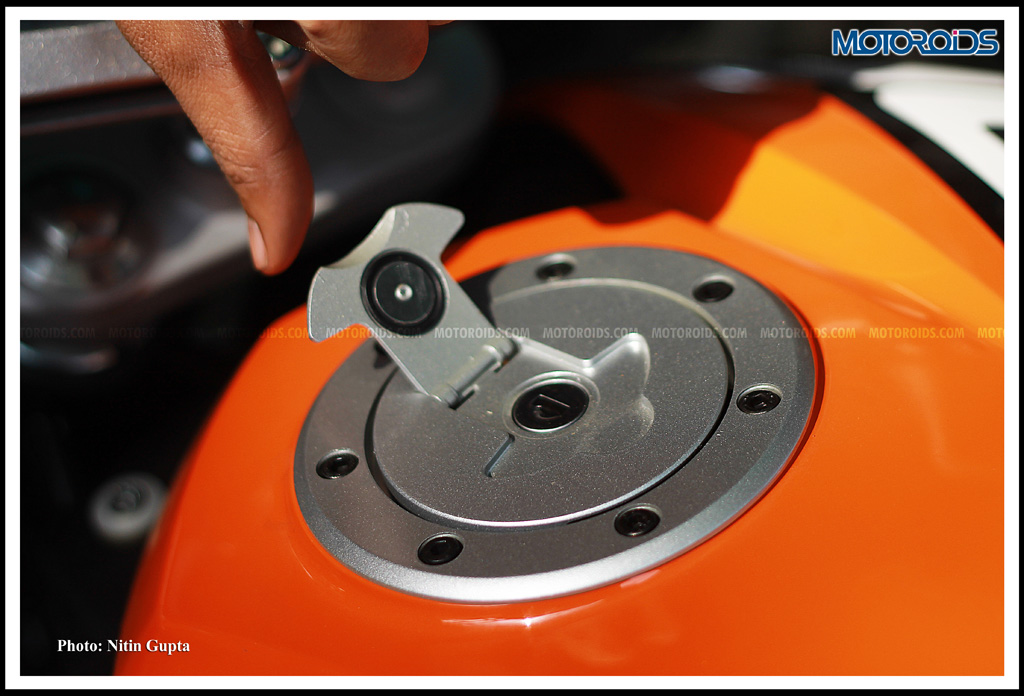 While I may have sounded smitten by the Baby Duke thus far, let me inform you I have few grouses as well. While the foot-pegs have been positioned right for the rider, I think they could have been placed a little lower for the pillion. Tall riders, specifically those who are 5’ 11’ and above will most likely have to fold their legs rather inconveniently to stay perched with confidence.

The Bike’s instrument console though small in size is equipped with all the info you need. Twin trip meters, an odo, tacho, gear shift indicator, customizable red line (fancy!) and kms to next service. Want more? Go buy the S1000RR!

The coolant cap that comes out from the right side could have been avoided, as I feel someone can easily go and take it off or do something malicious, just as people have a liking for troubling others in India. Also, I tried to find the idling screw like the one on the Ninja 250 and 650, but it was missing. Seems like the company hasn’t provided it!

The tank lock’s quality has degraded since it first appeared on the Pulsar. The metal seems to be of a much lighter gauge. The handle lock is visually the same across, XCD, Discover and Pulsar. The good thing about this one would be that unlike the Pulsars the keys won’t repeat themselves after every 10,000 units. The Pulsars had their keys coded only to the count of 9999 after which the same sequence started all over again, the KTM won’t have that issue.

Not to forget the KTM comes with plastic mounted radiator grille which thankfully has its fins facing upwards. This means added protection for the radiator as the dirt, slush and pebbles kicked at it by the front tyres won’t hit it in the face. 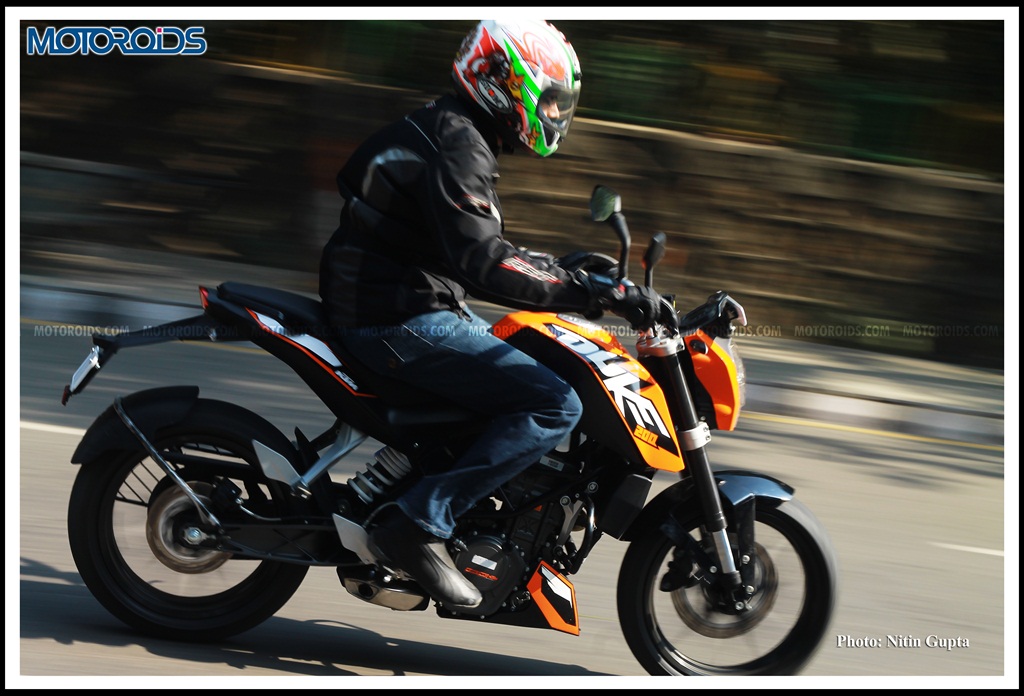 This is what I have been really waiting to write about. Here I had a much hyped 200cc bike under my behind, and I really wanted to know what it felt like, as I had ridden everything in that segment which the market had to offer thus far. I launched the bike post 4000 rpm; it went well, albeit with a little wheelspin. Later, when powershifted at around 9000 rpm, it reared up, popping an inadvertent wheelie at third gear. Needless to say, I realized I had never ridden something like this in this segment ever.

Post 2000 to 5500 rpm you may feel the bike is a little flat in terms of its power delivery, but the moment the rev needle touches 6000-6500, the bike hits the powerband. Thereon, you will really be amazed to know how quickly you get to 10,000 rpm, the point where it’s redlined. Talking of the engine redline, it can be altered, and increased up to 11,500. We managed to hit a top speed of 138km/h on the speedo with the redline altered.

You will never feel the bike low on power even in the 6th gear as it has enough grunt to pull through. Another awesome thing I felt was while riding with a pillion was the way this machine pulled off in the 4th gear after I applied brakes bringing the speeds down. On the performance front, the baby Duke really met my expectations. No, surpassed them, by a good margin. 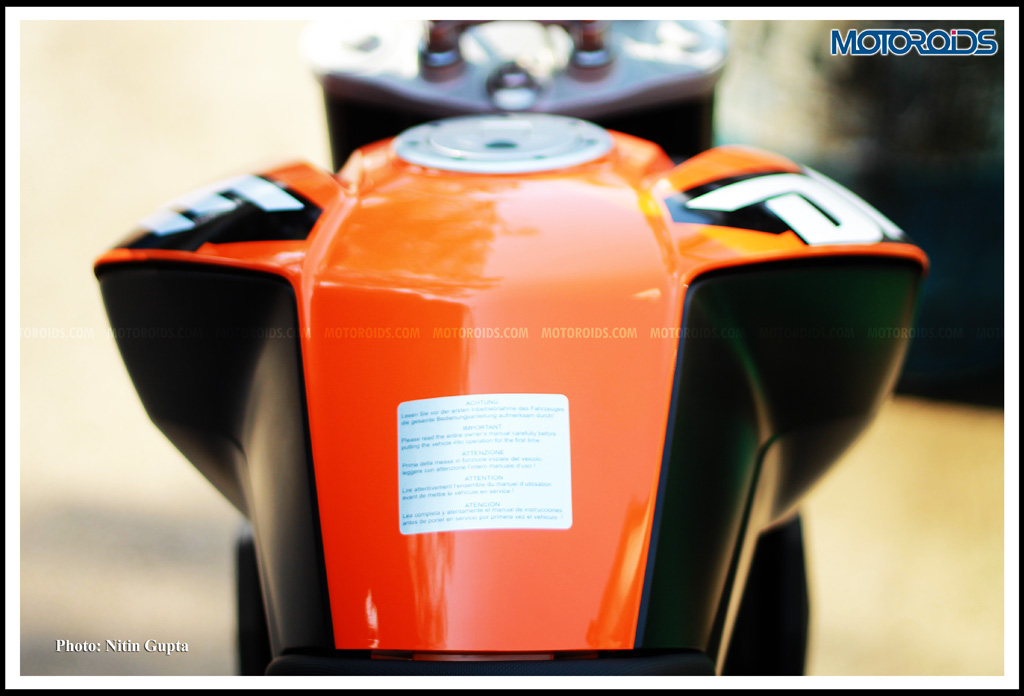 Summing it all up, I would say, KTM is the perfect bike for the rider who craves action. It cheers you up with its very visuals, preparing you for action even before you have inserted the key into the slot. Once you are aboard, it makes you feel comfortable and composed. And then, the performance – it’s in a league of its own. It is, most definitely a worthy upgrade from any Pulsar or a bike from a segment below. The only drawback I see is the small fuel tank capacity.

The power, handling, braking, the whole package seems to have come together so well with this machine be planted so well that you would have to be a reckless buffoon to be surprised and be in a difficult situation with this one. If you like the rush of adrenaline through your head, then this one’s for you. Not just does it have the outright performance, but it has a very distinctively playful character which will make even the most boring of your commutes into a fun-filled, naughty affair.