Never did I feel that I’d like a mainstream motorcycle as much as my KTM 200 Duke which made way into my garage in 2012. But the TVS Apache RTR200 4V, with its completely different and a relatively laid back character, has made me swear by the brand. The 200 Duke is an extreme machine of sorts. It’s got a unconventional design, a peaky power delivery, stiffer suspension and razor sharp handling. The Apache RTR200 4V, on the other hand, has a muscular design (which we at Motoroids’ office absolutely love), packs a good mid-range grunt (it somewhat fades towards the peak) and has a fabulously well balanced suspension which helps the motorcycle glide over minor undulations over the tarmac while still making it an able corner carver. 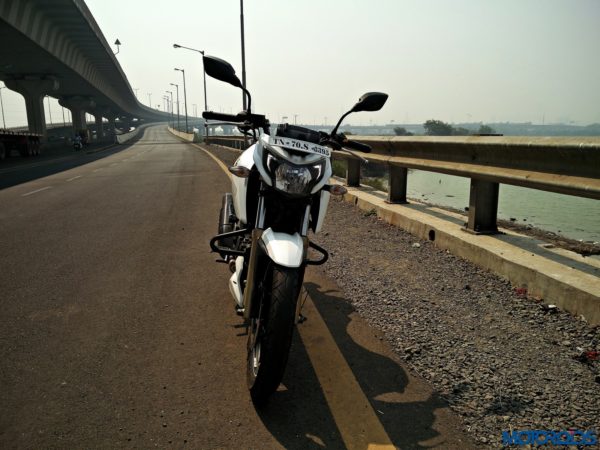 I’ve spent a good 3,000 km with the bike in the last couple of months which mostly involved commutes to work (54km round trip) and the odd weekend getaway. We’ve put up one of the most exhaustive reviews of the new Apache and the induction report of this long termer where we spoke in great detail about the real life prowess of the motorcycle. This time around, we’d tell you how the motorcycle is holding up after 9,000 km on the Odometer. 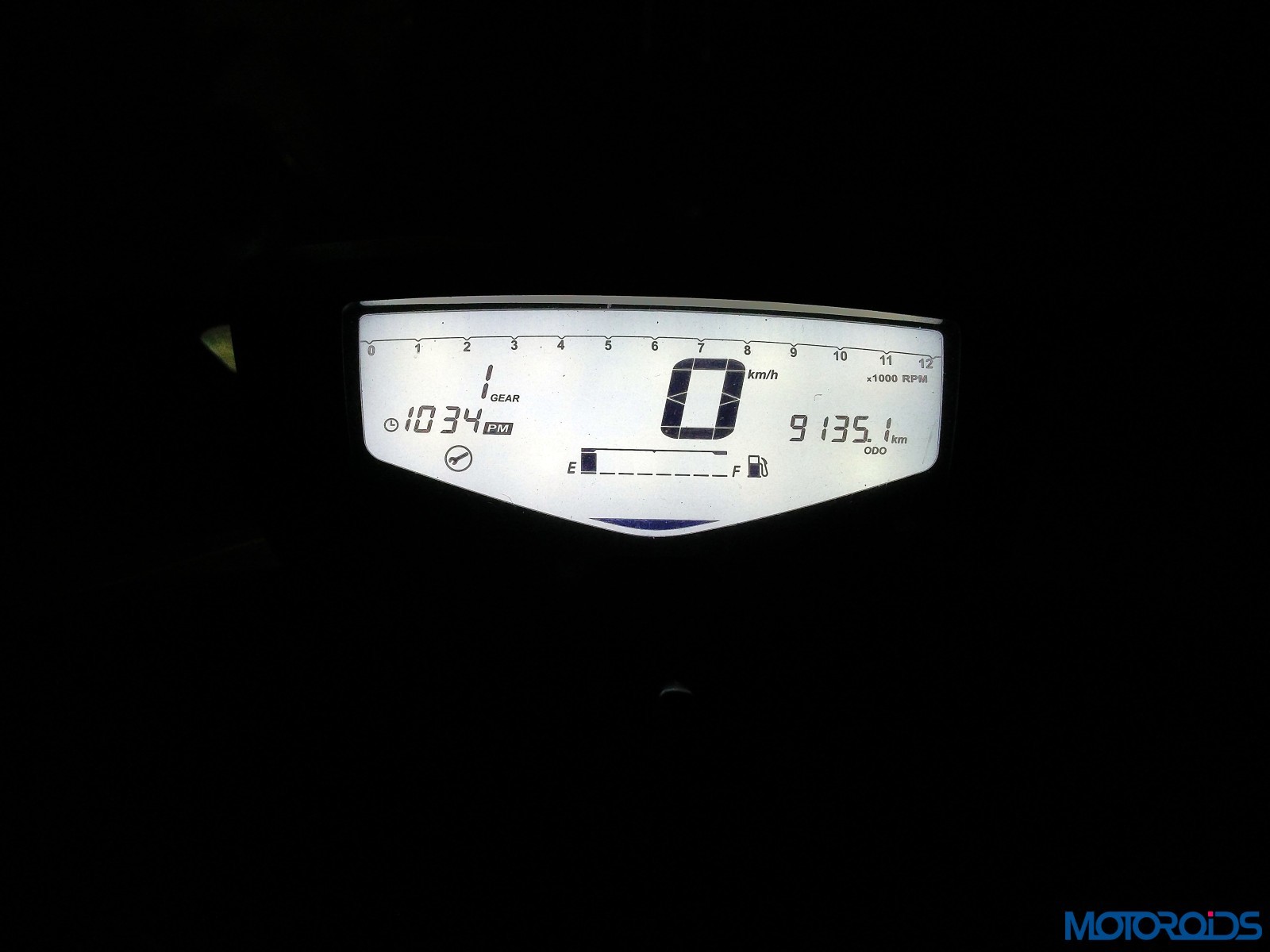 Just to recap the numbers, the 200cc single cylinder puts out 20.7 bhp of power at 8,500 rpm and 18.1 Nm of torque at 7,000 revs. The engine comes alive with a throaty note and it gets merrier as the revs climb. The pops from the exhaust canister are an absolute delight too as the engine comes down from a higher rev band. You’d want to stay above the 3000 rpm as the engine shows some signs of discomfort below that. So to cruise in fifth gear, you’d have to stay north of 50 kph, above 40 kph in fourth cog and above 30 kph in third. Pretty practical figures, those, from a driveability standpoint. 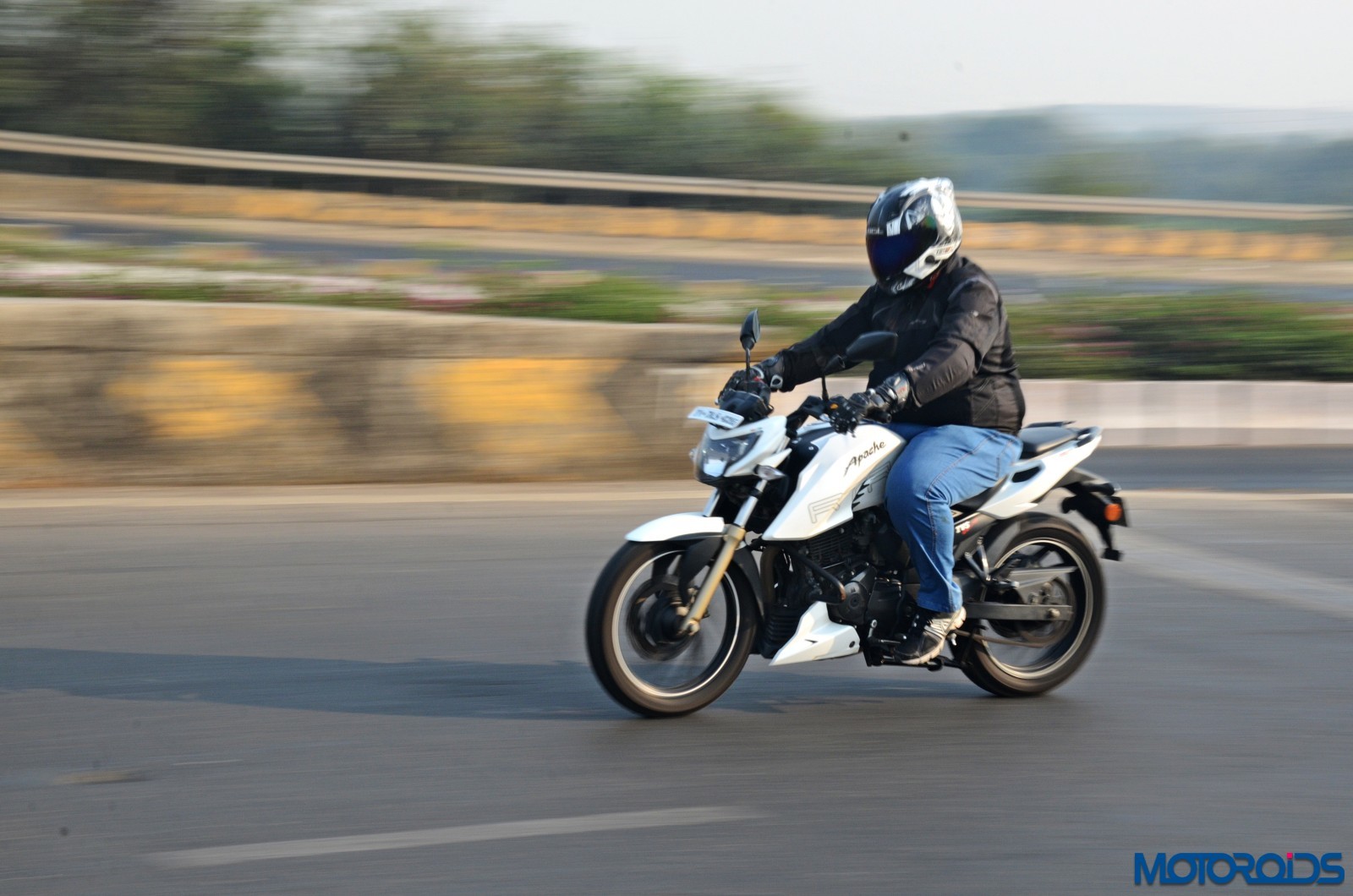 Third gear is good for speeds of upto 106 kph while the fourth will push you to 124 kph and the claimed top speed of 128 kph is reached at 9,000 rotations in fifth gear. The engine revs all the way to 10,000 revs (even slight above that too with a few efforts) where you’d see the speedometer going above the claimed top speed in the top gear. You can also cruise at 100 kph on the highway at 7,000 rotations in fifth gear with quite a few revs remaining till the redline and very little or almost no signs of stress on the motor. 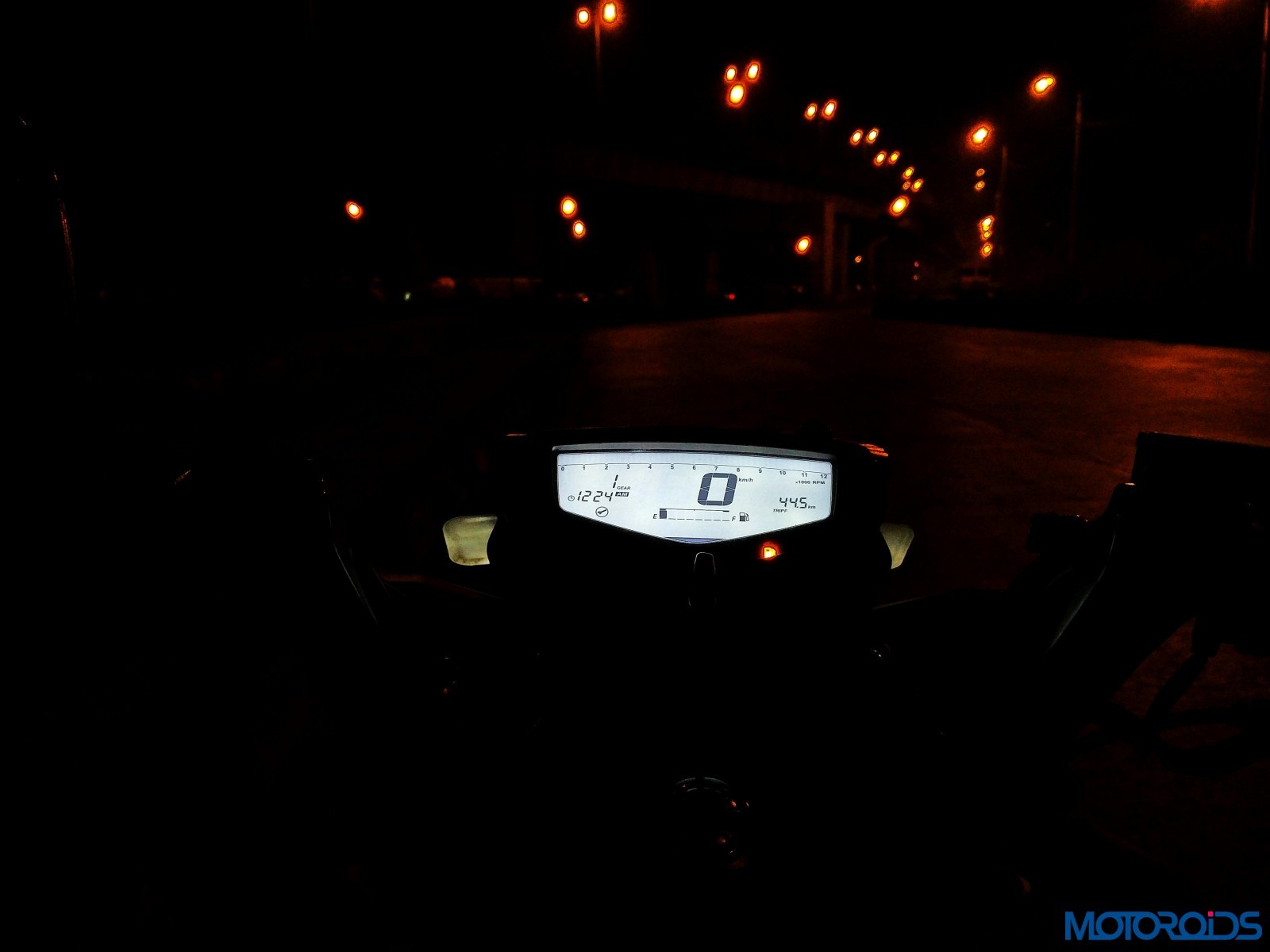 Riding the motorcycle in city is an absolute delight. With the agility of the motorcycle paired to the sticky pair of rubber from Pirelli, you can filter through traffic swiftly. The tyres fared well in our recent trip to Aamby Valley too, giving us utmost confidence to push the motorcycle around the corners. The tyre threads look good enough for a few more thousand kilometers before they need a replacement. The brakes have been holding well too. We would have wanted that engine to have a bit more spunk all the way to the redline, but we know we’re being unjust and greedy here. Thing is, the chassis and tyres of the RTR200 work so well, that 200cc engine goes out of breath much before the bike’s underpinnings do — which sometimes leaves you wanting for more, especially when you’re around a set of inviting bends. 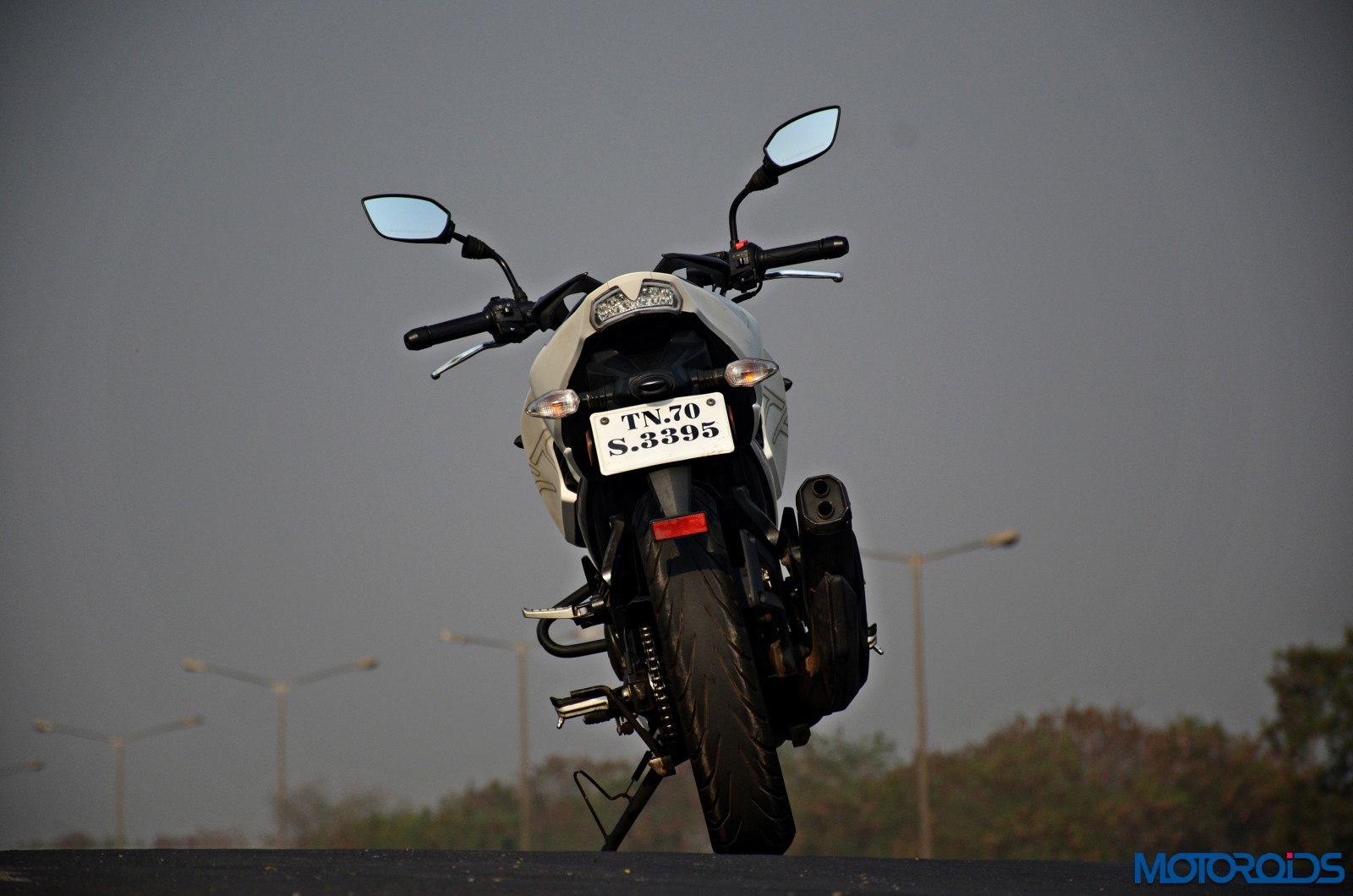 Visually, too, the Apache RTR200 4V is an absolute eye candy for the mainstream segment. The sharp headlight, all-digital screen with a perfect display, chiseled fuel tank with an offset lid and the double barrel exhaust canister make the Apache RTR200 4V one of the finest looking motorcycles in its segment. At traffic lights, the motorcycle would get an occasional, curious stare from fellow riders, especially from folks riding the RTR180s and those aboard the Pulsars of the world. 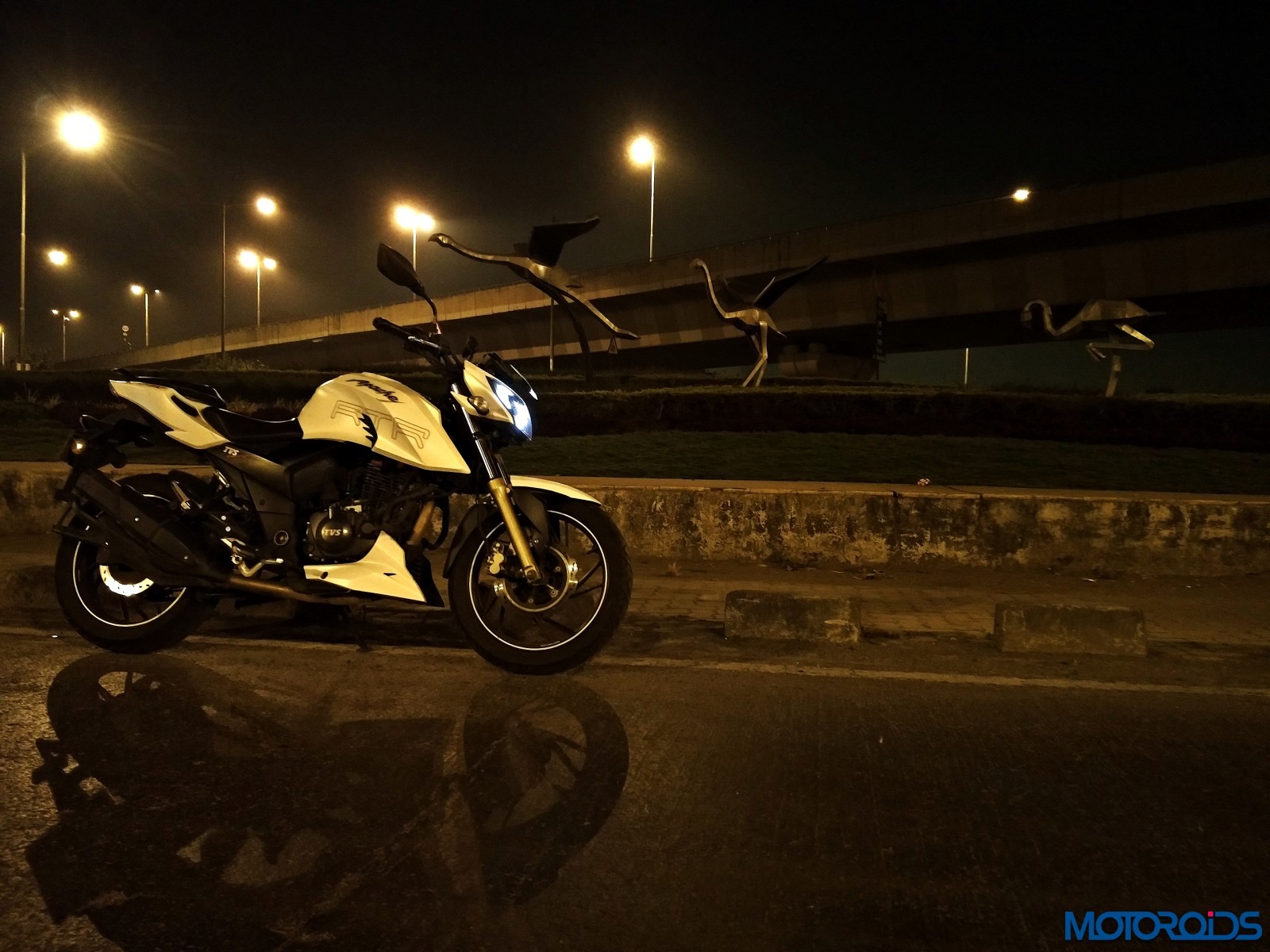 Overall, the motorcycle has held together really well. However, one issue has bothered me over the last couple of months. Despite a couple of attempts to fix it, the right-side mirror tends to get loose on high speeds which does become bothersome at times. 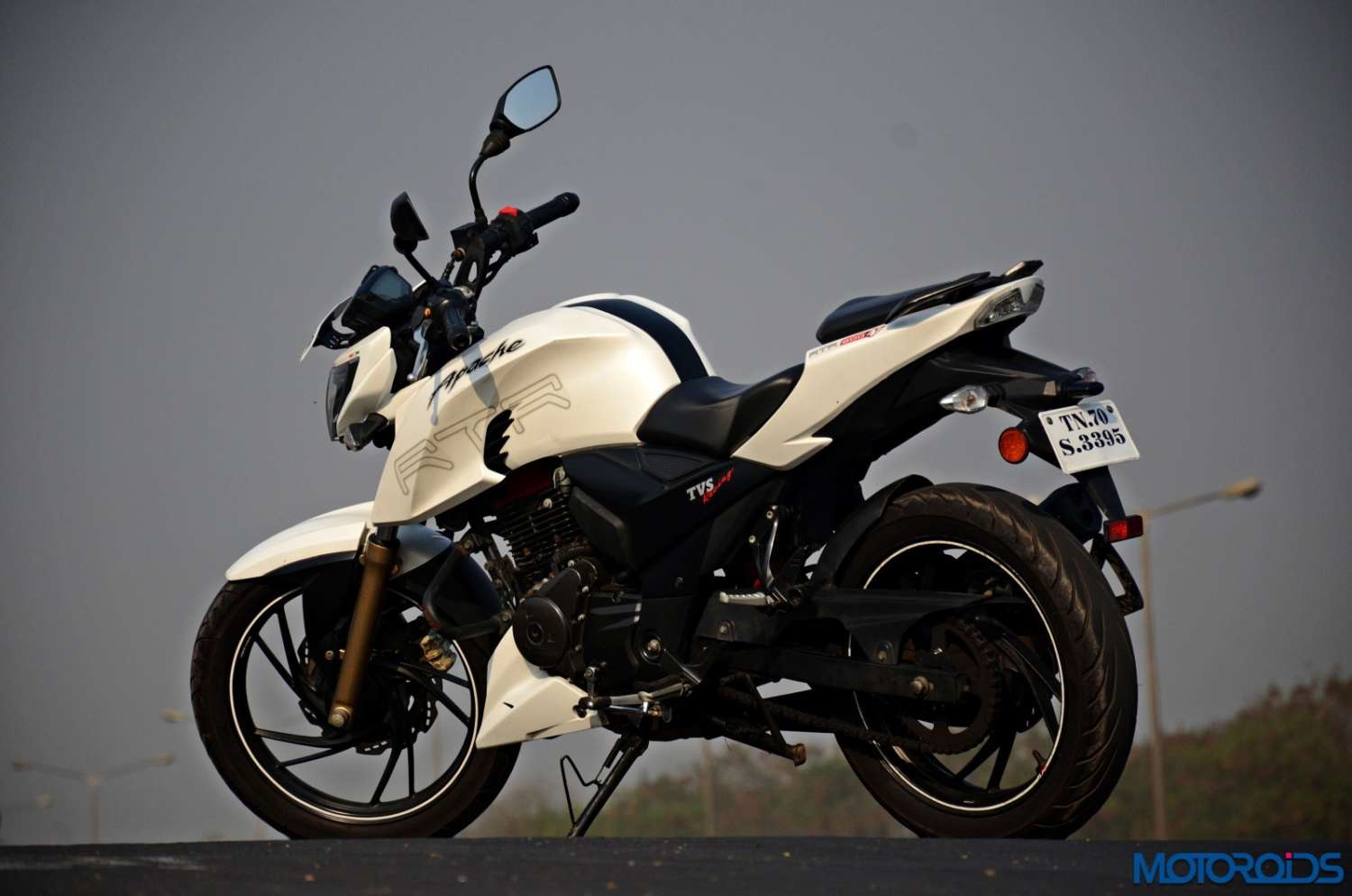 Bombay winters aren’t the most brutal when compared to the anarchy that prevails in the northern part of the country. But the mercury did test the lower teens this year. The engine, with the good ol’ carburetor, required a bit of assistance from the choke switch before settling in the idle speed of around 1200 rpm. So we’d rest it at idle engine speed for a minute or two before we geared ourselves during those wintry days. 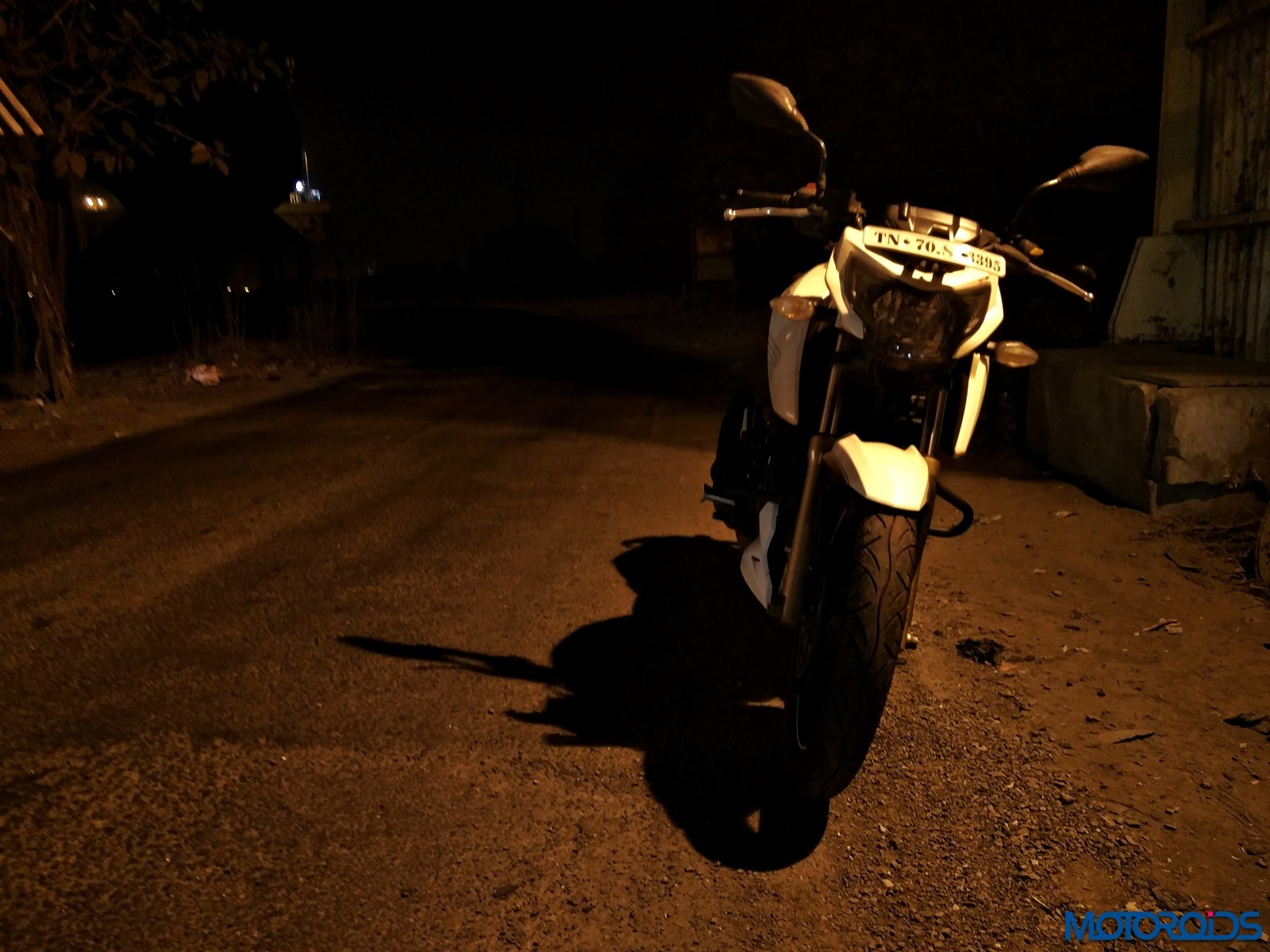 The clutch is as good as it was on day one and the operation is smooth as ever. The gear shifts are crisp too although we did see false neutrals on a few rare occasions. Vibration are next to non-existent on the big Apache in the low and mid range. There are a few negligible ones at high revs but this one here is much more refined than any of its immediate nemeses. 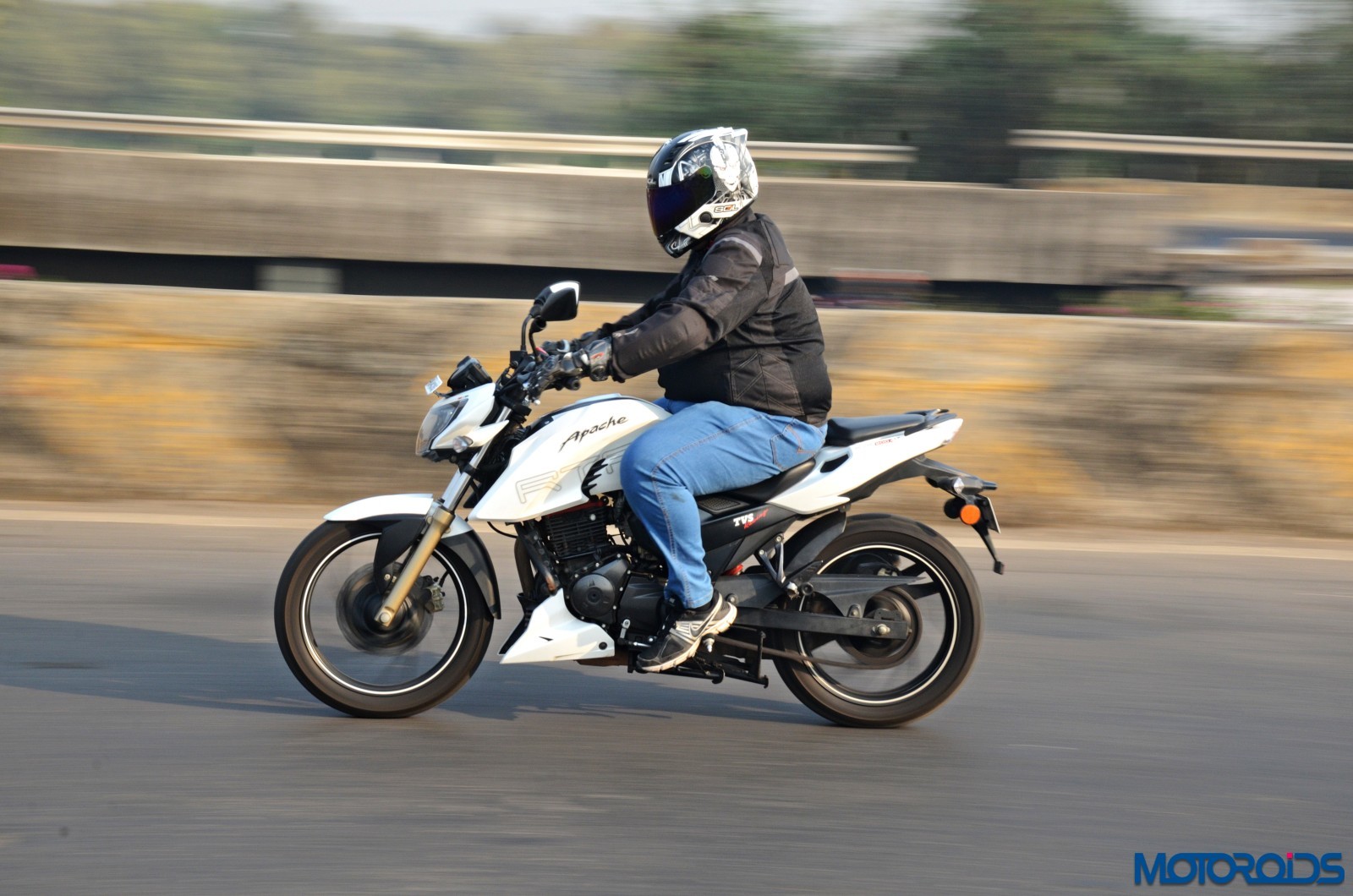 All-in-all, the motorcycle has held together pretty well, especially after surviving the utter disdain of one of our colleagues who doesn’t believe in terms similar to ‘service’ or ‘maintenance’. It has proven to be a perfect companion for city riding while being a potent getaway tool for those long weekends. The build quality is absolutely phenomenal, especially for the price, at which it undercuts almost all the 200-250cc motorcycles in the country. We’d bring you more updates about the motorcycle in coming months. Meanwhile, share your views about the motorcycle if you own one, and feel free to ask away any questions through the comments section below or through one of our social channels.