After having driven, and having been exceedingly impressed by the new Hexa in its automatic version in Goa, we recently got a chance to drive the manual, 4×4 version of the big new Tata SUV. Now, to start off, the Motoroids review of the Tata Hexa AT was probably the most exhaustive anywhere on the web and covered every detail. So we would encourage our readers to head to the Tata Hexa AT Review straightway to get a complete understanding of the product. Here, in this review, we will talk only about the things specific to the manual version. Here goes…

To start off, the engine powering the MT version remains the same as the AT. It’s the 2.2litre VARICOR 400 turbo diesel engine that dishes out 156PS of power at 4000 rpm and 400NM of Herculean torque between a band of 1700-2700 rpm. The engine is mated to a six-speed manual gearbox, which is the key differentiator here. More on the experiential aspect in a bit – let’s get done with the key facts first. 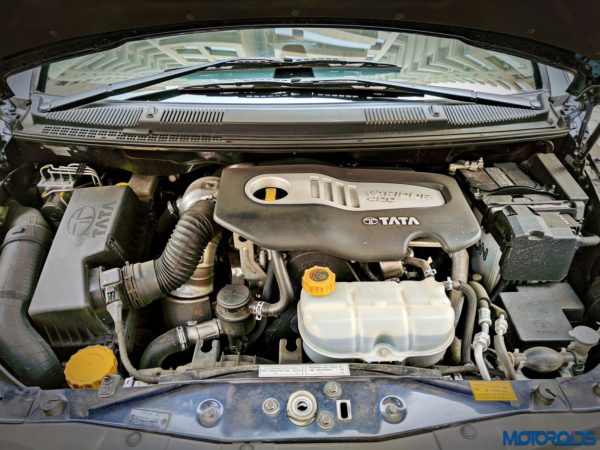 There is a small bit about the base version of the Tata Hexa that everyone needs to know about. The XE variant of the car is equipped with an engine different to the mid-spec XM and top-spec XT variants. This engine is the 2.2litre Varicor 320 turbo diesel with 6 PS less than the VARICOR 400 and is rated at 150PS at 4000 rpm. Torque output is significantly lesser (- 80NM) and is rated at 320 NM between 1700 and 2700 Nm. Also, the basic variant gets a five-speed gearbox against the six-speeder on the other variants. 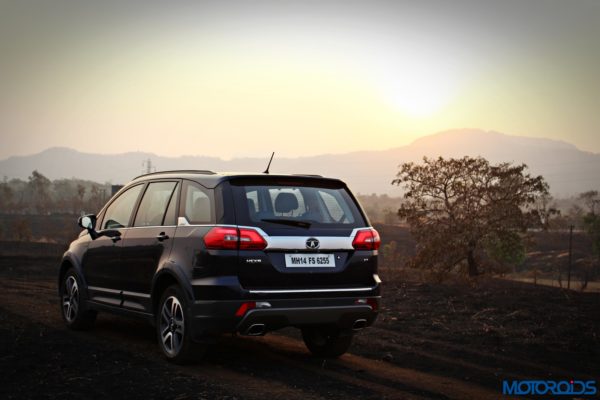 We drove the top of the line Hexa XT variant with 4×4. This one, along with the  XT 4×2 and XTA (automatic) comes with big, 19 inch wheels shod with 235/55 rubber. The lower spec XM and XE variants come with (much) smaller 16inch wheels with a larger sidewall profile. In that sense, the primary suspension of the two variants is different, and at the outset, we would like to make clear that our comments on the handling of the XT would be based on the firmer 19inch setup – the ride quality and handling of the lower spec variants may be significantly different.

There are a few other important feature related differences between the auto and manual versions.

Alright then, let’s get down to the driving bit. Turn the ignition and the big VARICOR motor comes to life sending the behemoth to a mild shudder before settling down to idling. You could hear the engine noise getting inside the cabin a wee bit more than ideal, but nothing worth a complain. 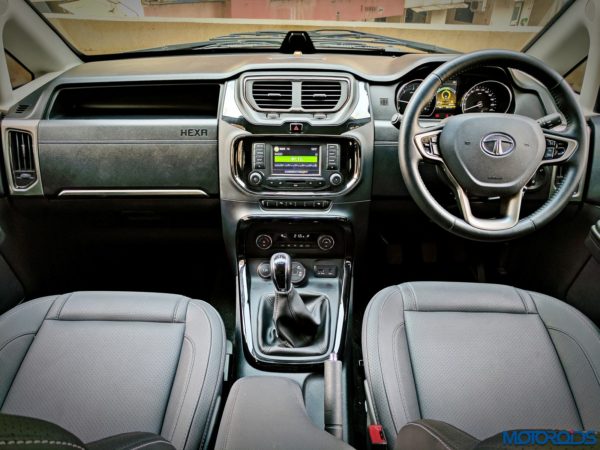 Setting the car in motion introduces you to two key aspects – the clutch pedal has a long travel and is somewhat heavy. Secondly, reaching for that gear stick would make you realize that it’s a bit farther than ideal.  Engaging the first gear would also make you realise that the throw is pretty long and it’s not the slickest of the ‘boxes out there, with a fair amount of roughness and notchiness to be experienced.

Set the Hexa in motion and some inherent strengths of the Varicor 400 motor start unravelling. There is plenty of low-end torque available here. This engine has the capability to keep going from near idling revs. Try fetching too low down the barrel, and you will hear the cabin boom below 1300, but at this point, you should be spanked to expect such a heavy car to pull cleanly at such low revs. The progress gets more positive from 1300 revs onwards and the Hexa introduces you to its capability to chug along without the need to shift gears too often. The engine and gearing is very well suited for slow-moving city traffic, though the clutch and gearbox don’t compliment the engine well for stop-start conditions. Turbo spools up properly at 1800, at which point you could feel the turbo kick. 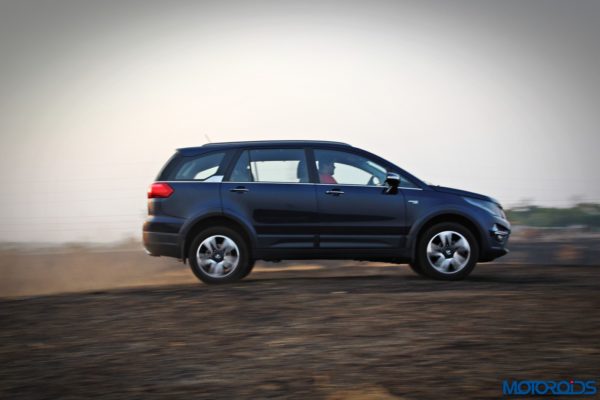 Progress, as regards acceleration is appreciable from 1800 rpm onwards, to about 3800 rpm. Thereafter, the power and torque starts fading and acceleration is less intense. Also the engine starts getting noisier as you nudge the 3000 revs. The tacho needle would go red at 4500 clicks with the limiter cutting in at 4800 clicks.

All this while, the Hexa feels like a vehicle which is properly large, has a commanding driving position, is heavy and has an engine that loves spinning away languidly, making the car munch miles at ease. It doesn’t much appreciate being hustled though. 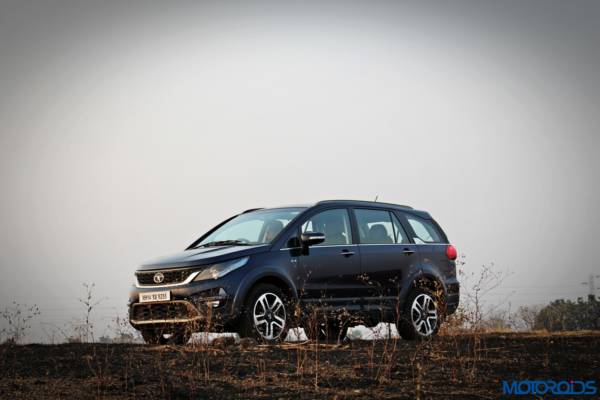 The Hexa feels effortless on the highway with its planted drive feel, heavy steering and fabulous ride quality. Cruising speeds of 100-120 km/h are achieved with the engine not even remotely stressed in the top gear. Try to make the Hexa turn directions quickly, or accelerate or decelerate hard in quick succession, and its heavyweight becomes rather apparent. It’s about 400 kg heavier than its immediate competition, and there’s no getting away from that girth.

So while the Hexa would absolutely demolish the imperfections on the road with its splendid ride quality, around the bends there is a decent amount of body roll to be witnessed. If you’re looking for agility, you should probably be looking elsewhere. However, if presence, plush ride, cabin space and an authoritative drive feel cut the mustard for you, the Hexa would be happy to massage your ego.

We drove the Hexa in a mix of city and highway conditions and it felt pretty manageable in all conditions. The steering weight could have been lighter at low speeds, we reckon, but it doesn’t require you to develop muscles either. We got a fuel efficiency which hovered around the 10kmpl mark, which is par for the course for such a big and heavy car. 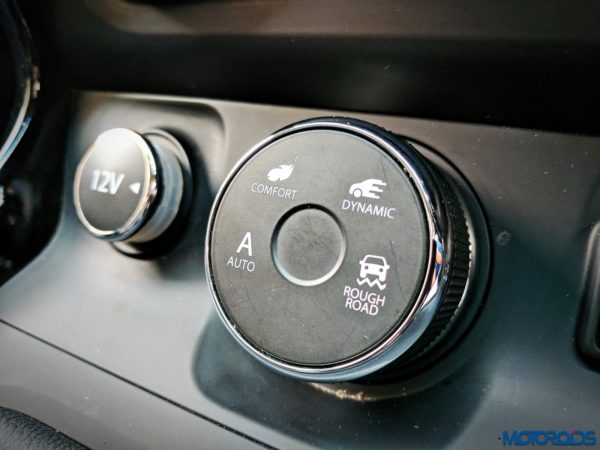 The car also comes with the ‘Super Drive Modes’ including Auto, Comfort, Dynamic and Rough Road, for better suitability to different terrains. The new system tweaks Engine performance, Electronic Stability Program (ESP), Torque on Demand (TOD), Instrument Cluster displays and the vehicle’s ambient lighting through a rotary knob, on the centre console. Here’s what the various modes do 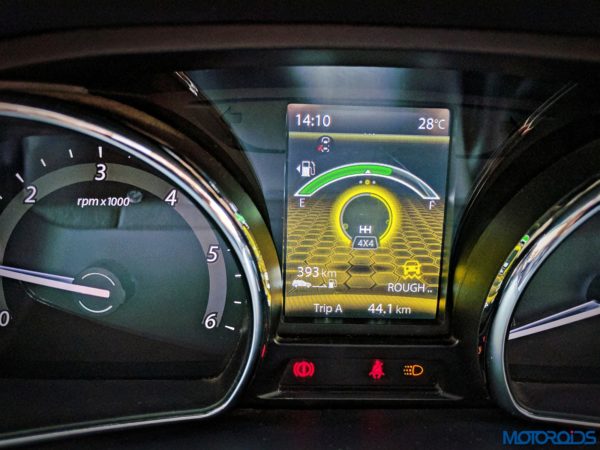 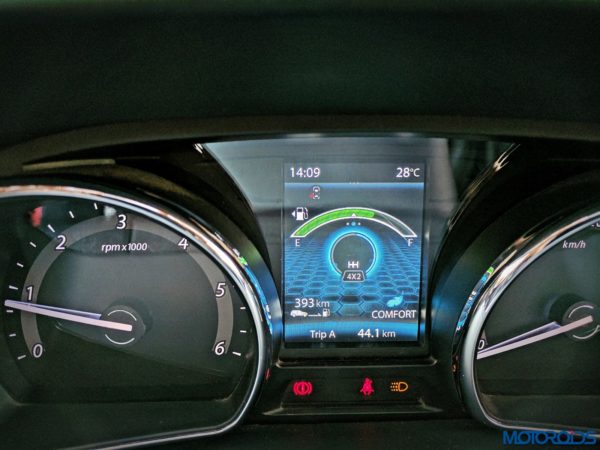 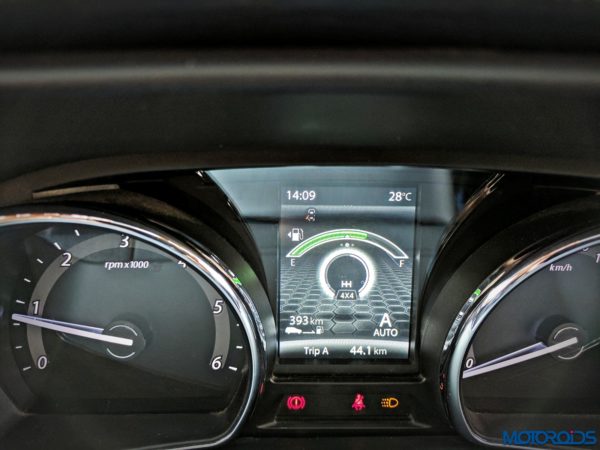 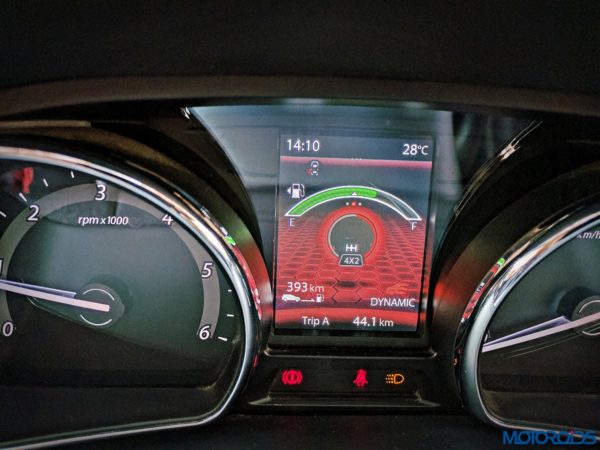 We also took the Hexa 4×4 for a mild off-roading session. While this wasn’t a very serious course, it was good enough to stop your everyday car from reaching certain points. The Hexa 4×4 impressed us with its ground clearance, controlled power delivery and traction in most scenarios. The front overhang, however, can sometimes be a bit of a deterrent while making an aggressive approach downhill. Here’s a quick video of a part of our off-road drive.

Here’s an image of the Hexa with the XUV500, its immediate rival for a quick comparison 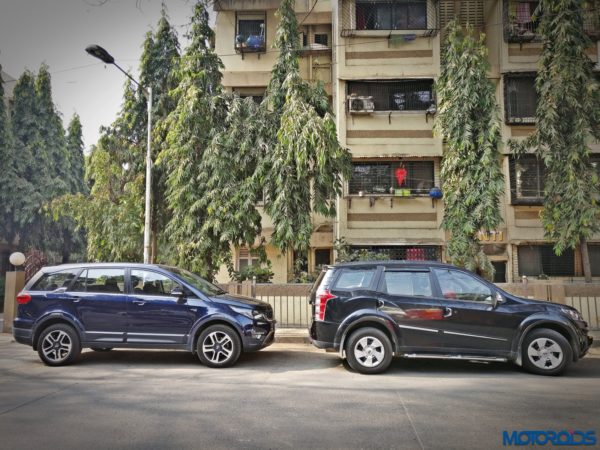 In all, we liked the Hexa for its striking exterior, size that spells presence, capacious innards, a commanding driving position, well appointed cabin, features and a fantastic price. It’s a great value proposition knowing that the more premium options in the SUV space are significantly more expensive. It’s also a huge departure from the Tata cars of yore with significant improvements in terms of features, interior quality, design, finish and refinement. Downsides include a rather lacklustre gearbox and heaviness which reflects in areas such as agility. 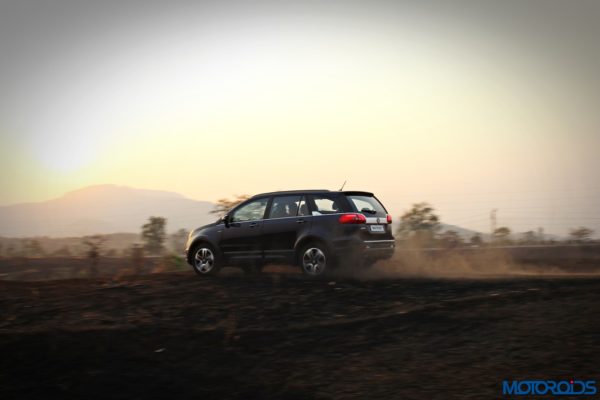 The Hexa is familiar Tata territory of SUVs where the Indian carmaker has tasted some success. It has its own set of virtues and for those who are looking at comfort, space and presence more than outright dynamic ability, the Hexa offers a fantastic proposition. Go take a test drive, you will be pleasantly surprised.