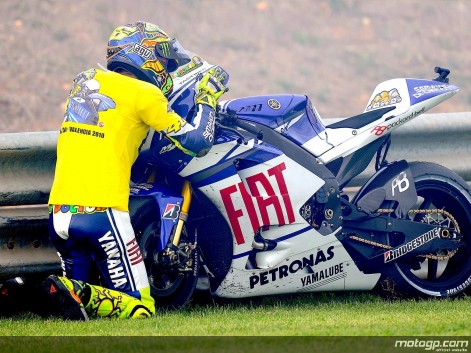 A two hour long successful surgery by two highly talented doctors is what the 9-time world champ needed to get himself back in shape. He gets his shoulder operated finally.

The Doctor(not the one who operated but the one who was operated) had a crash during a Motocross session earlier this year, damaging his shoulder costing him a lot of MotoGP points, chances of winning the championship and confidence. He raced but crashed again. But he recovered at a pace which is an evidence good enough to prove that he belongs to some other planet, or maybe galaxy.

The surgeons who operated Rossi said, “The condition of the shoulder was really critical. Valentino really had to be tough to keep racing with that kind of injury. The intervention went well, without any complications. For rehabilitation, you’d usually need 90 days for that kind of injury but we’ll do our best in order to meet the requirements of the rider.”

We are waiting for you Valentinik. You have a big task at hand this time – make that red monster go around the track better than anyone else. We know that You along with Jerry and team can do it easily.

May your recovery be as fast as you are!