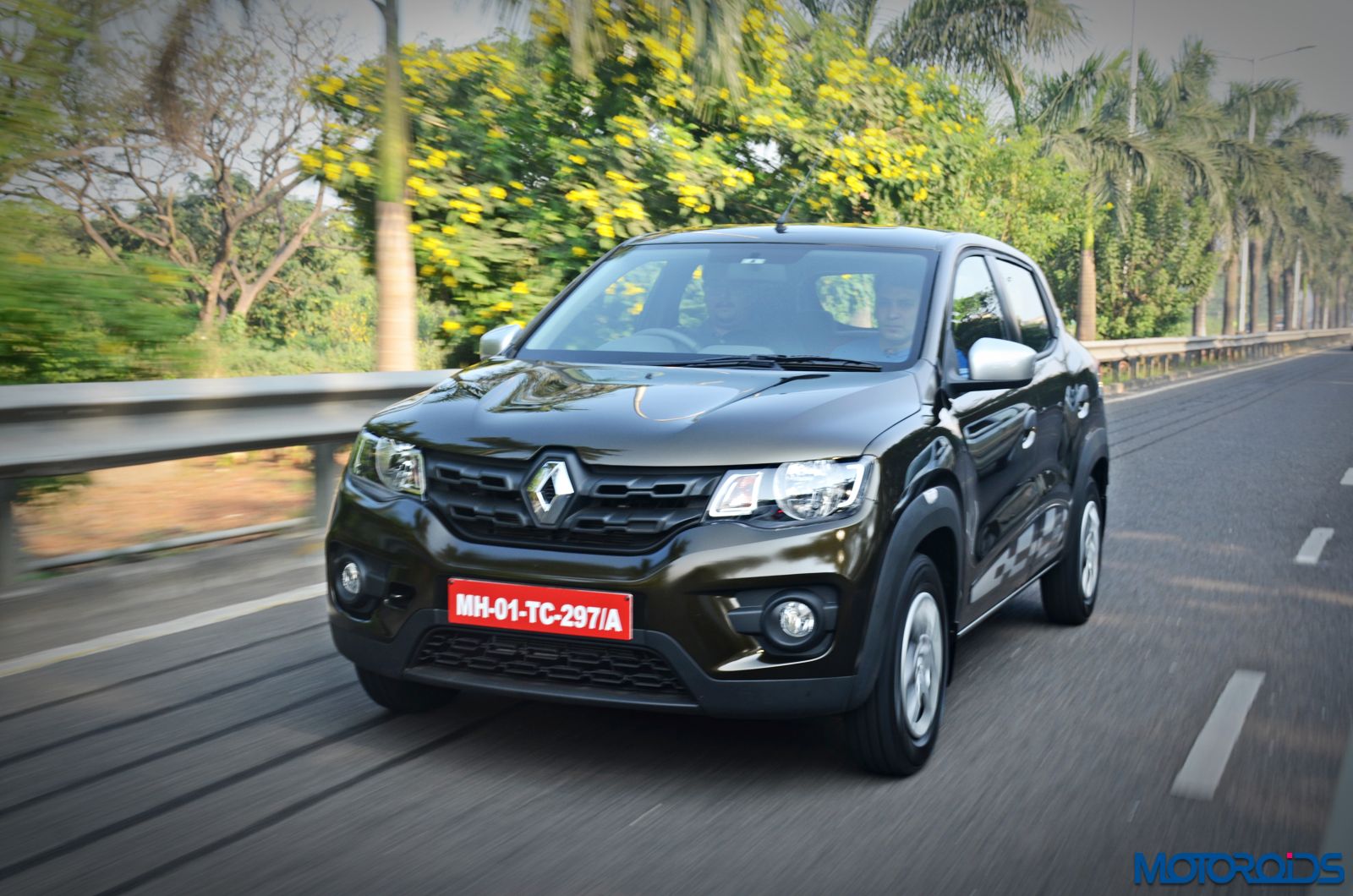 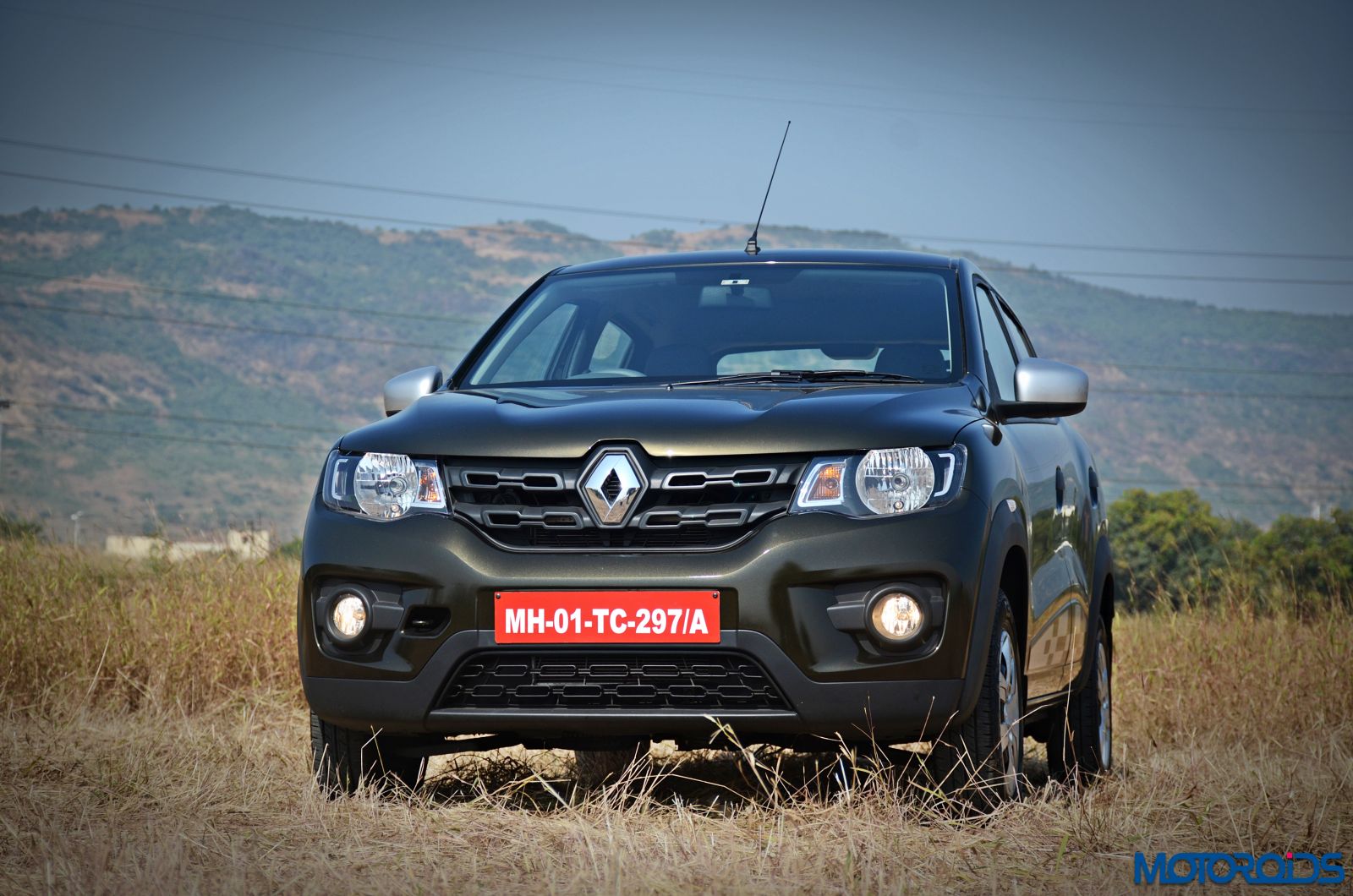 Renault’s new K(w)id on the block has been around for more than a year now and has brought loads of happiness to many upwardly mobile families, propelling its French maker higher up in market share charts in the process. The relatively new entrant in the Renault family also recently found sibling in the form of the Kwid 1.0-litre SCe. To make the Kwid a complete package, Renault has now equipped the car with an automated manual transmission, or AMT, and christened the new variant as the Kwid Easy-R AMT. Is it any good? Let’s find out 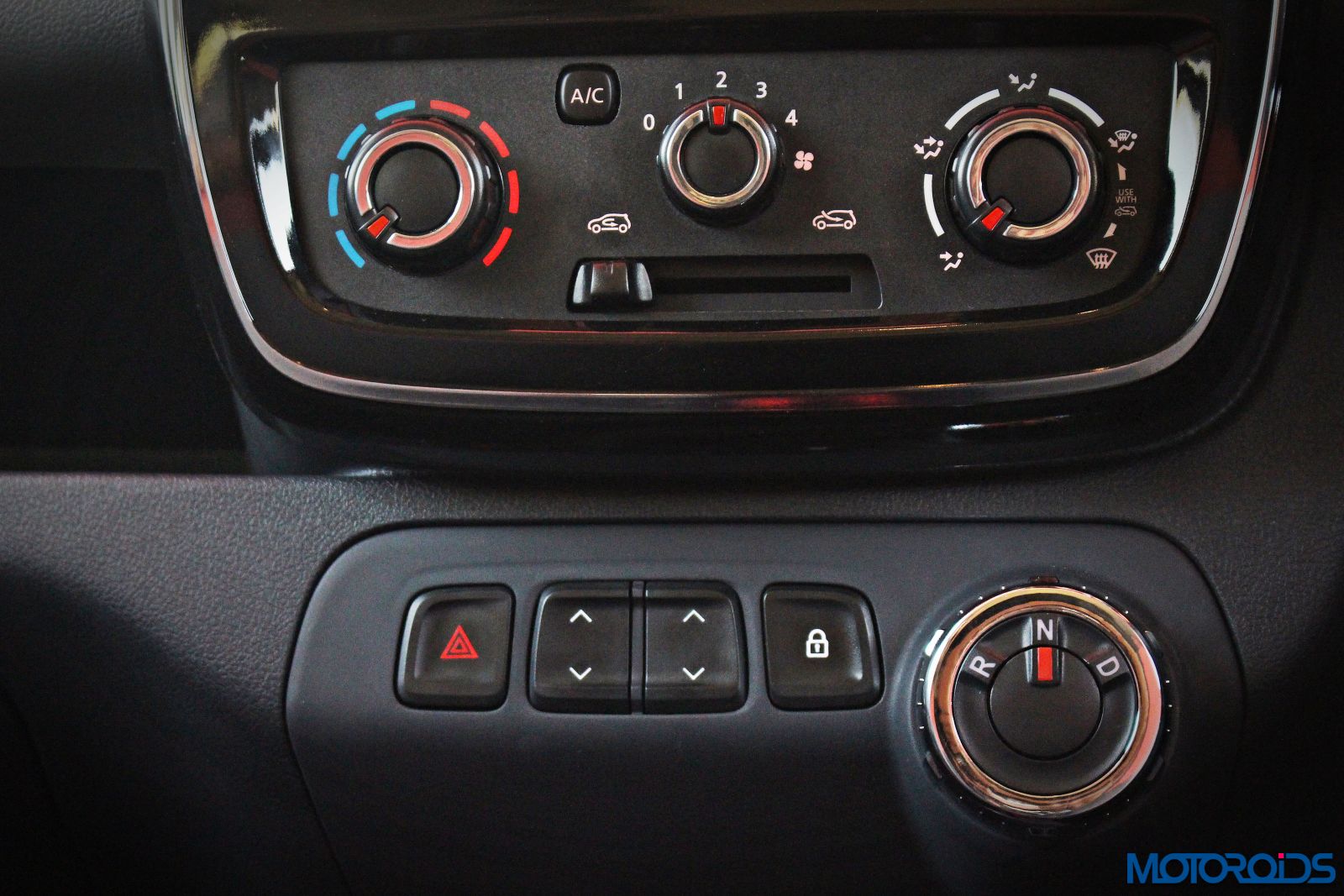 The Easy-R AMT on the KWID has been carried over from the Duster. While the compact SUV handles the transmission duties with the use of a conventional gear lever, the Kwid receives a rotary knob for selecting transmission modes. A segment first feature, the gear knob selector is located on the centre console right below the HVAC controls. This feature also releases additional storage space between the front seats. Renault has cleverly utilised this space to throw in a couple of cupholders, nestled within a large-ish cavity which can comfortably swallow your cellphone, or wallet, or both. There’s also a large-ish bottle holder at the fag end of this arrangement. 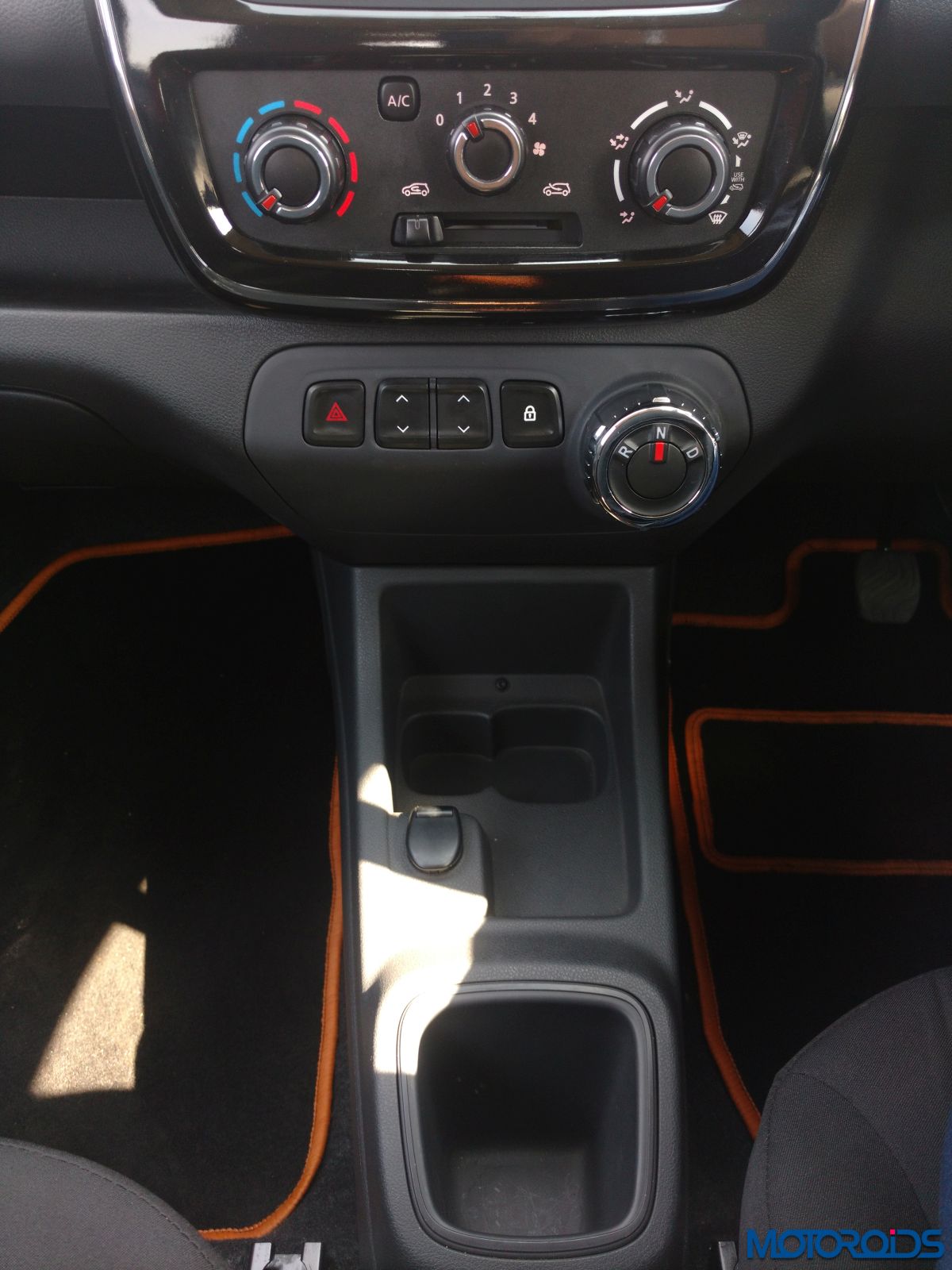 The Kwid 1.0 SCe is differentiated from the new AMT variant with the presence of the Easy-R logo at the bottom of tail-hatch on the outside. On the inside, the rotary knob and the absence of a gear-stick tell the two variants apart. Everything else remains the same. Upfront the model receives the signature chrome finished diamond logo nestled between a two slat structured grille. The headlamp cluster also receives a few chrome highlights while the fog lamps are wrapped in the conventional rounded enclosure.  The roof features a centre mounted antenna as well as an integrated spoiler. 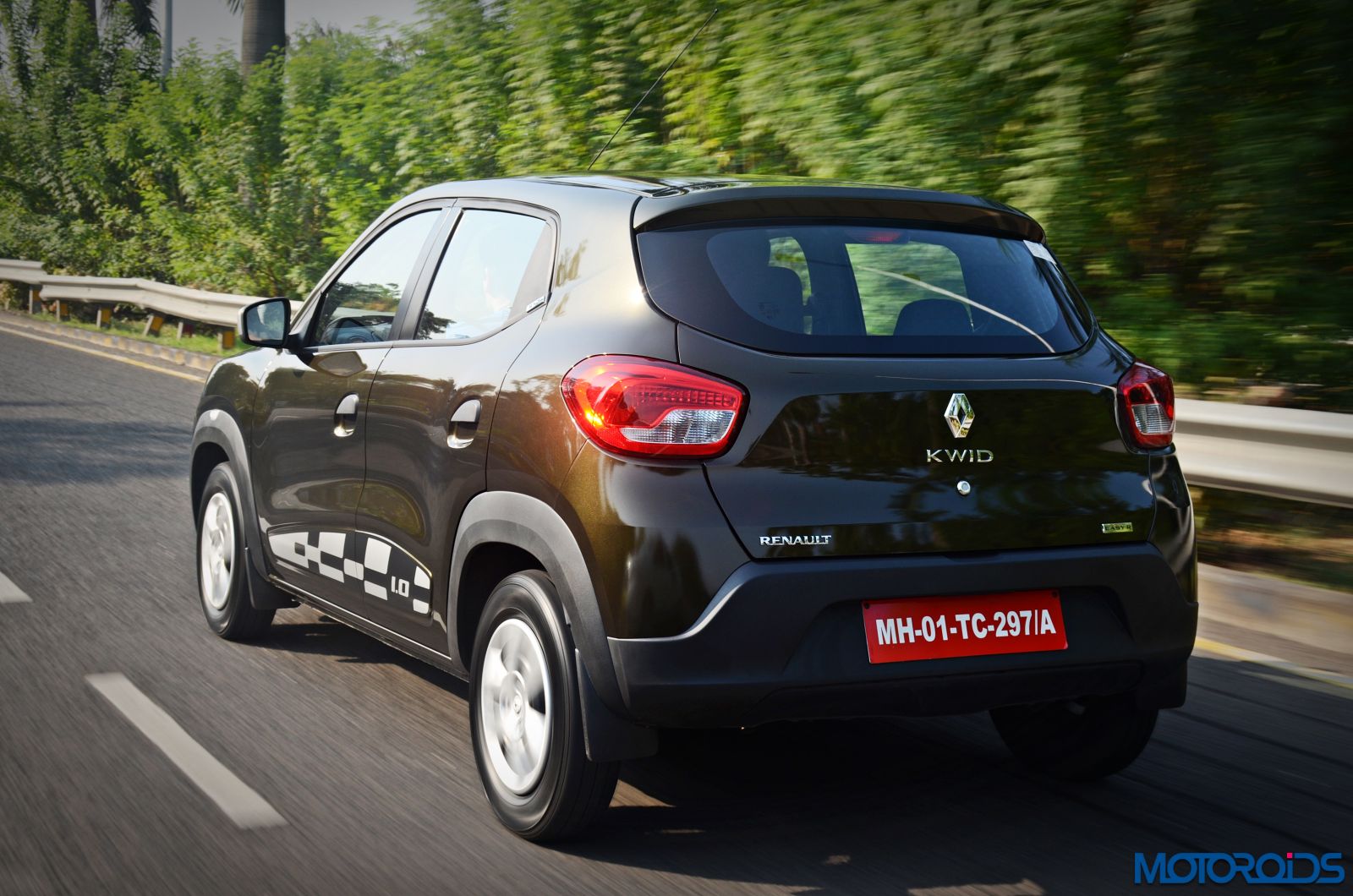 Moving on to the engine, the Kwid AMT is based on the same 1.0-litre petrol mill which is tuned to produce a power output of 67 hp while the peak torque is rated at 91 Nm. Based on the top-of-the line RXT trim, the model comes with all the bells and whistles the French automaker has to offer in this segment. Familiar to the Kwid 1L SCe, the model comes equipped with features such as contrasting wing mirrors, 1.0-litre decals on doors, remote keyless entry, ‘Champion red’ upholstery, dual tone dashboard, completely digital instrument cluster, 7 inch touchscreen infotainment system with USB and Aux-in ports and so on. Safety features available as an option include a driver side airbag, seatbelt pre-tensioners and load limiters.

Coming back to the transmission, the five speed AMT features three modes – Reverse, Neutral and Drive. Renault has gone ahead to give the creep feature a miss in the Kwid AMT, courtesy the feedback of customers who felt that the function wasn’t very popular among users. While one may feel the AMT is nowhere near being a performance enthusiast’s delight, the model is sure to win the hearts of commuters who have to travel or rather struggle in bumper-to-bumper traffic for hours together. 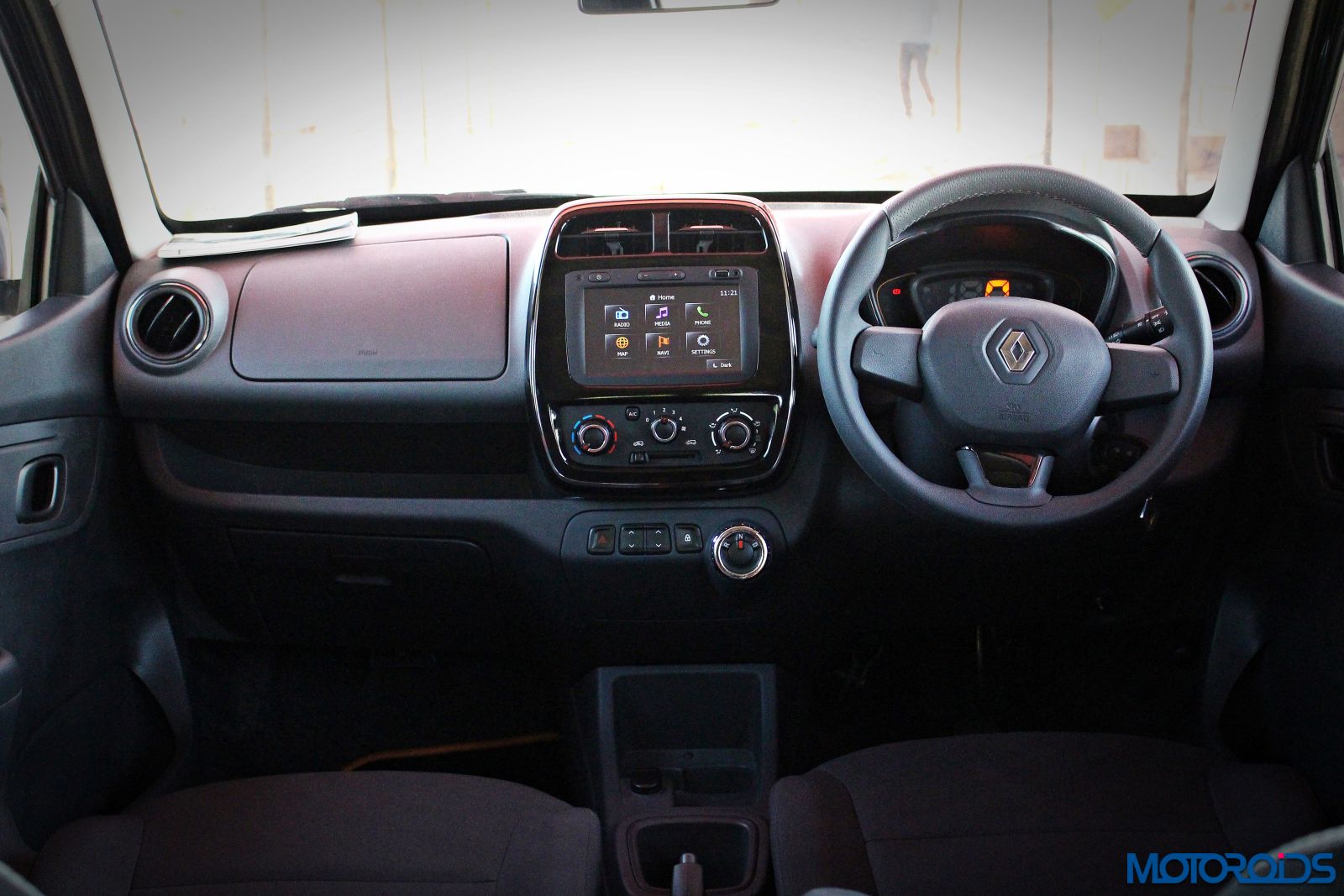 Just as any other automatic, you bring the engine to life by laying your leg on the brake pedal before you twist that ignition key. Once the engine fires to life, you gently rotate the knob to the drive mode before you set off. unlike some other similar setups, the KWID Wasy-R AMT will not move an inch until you step on the gas, as there’s no creep feature here. 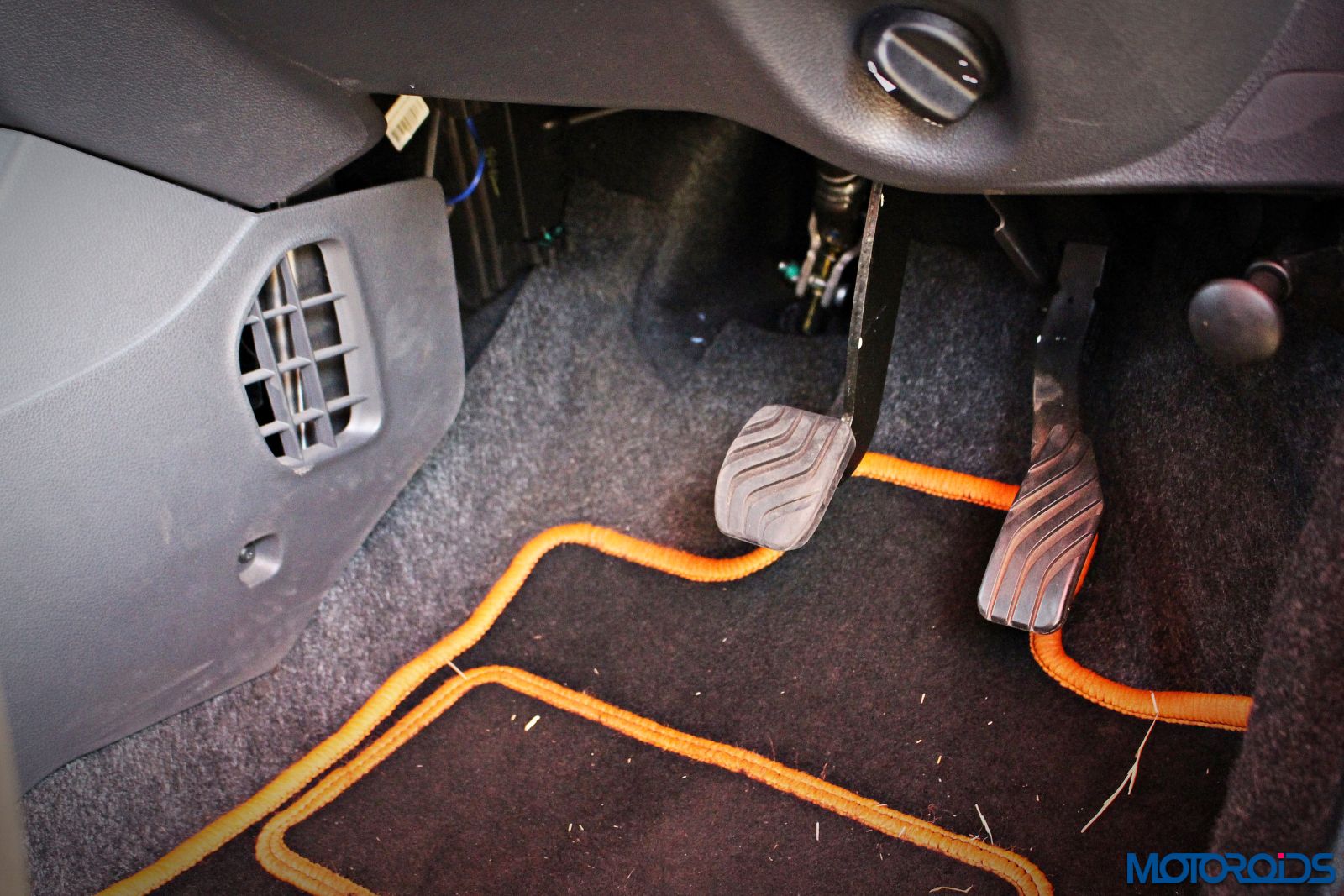 Another important thing to remember here is that you have to keep the brake pedal pressed every time you wish to change the modes on the drive selector knob. If you happen to forget pressing the brake pedal while switching modes through the knob, a tell-tale light situated on the right hand side of the instrument console will light up, reminding you to step on the brake pedal.

Now, while we have not been too impressed with the efficacy of such systems on a few other mainstream cars, this one here seems to have been executed rather well. Once in motion, with a light foot, or while applying part throttle, the shifts happen rather seamlessly with no perceptible jerks. While that shift action doesn’t necessarily mean quick response to throttle inputs at all times, for a leisurely driving style, it does manage to offer a smooth experience. 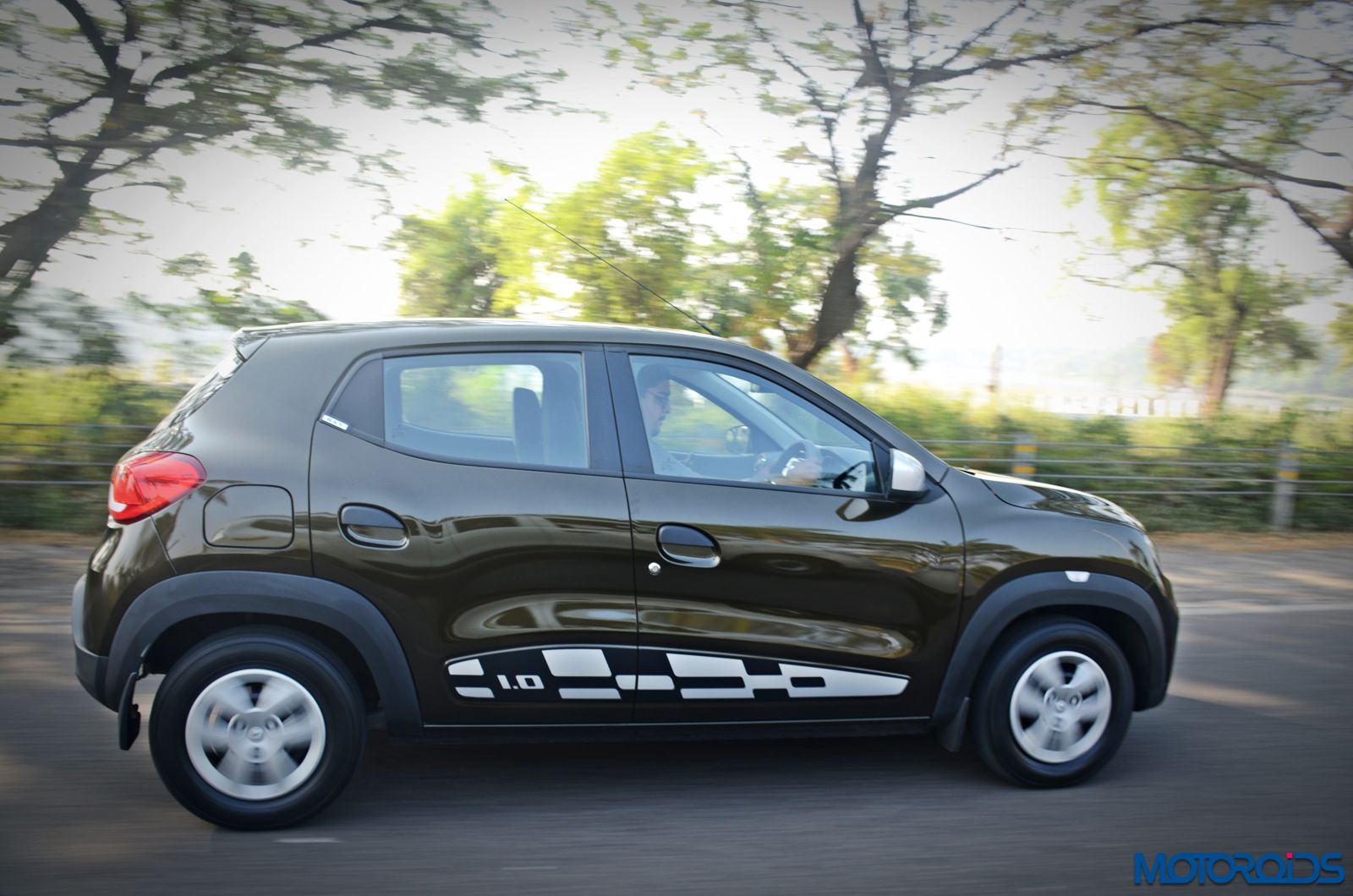 The scenario changes a bit as you bury the pedal though, with kickdowns coming in later than expected. Gearshifts are also sometimes accompanied by a mild clunk. We must mention here, though, that AMTs by nature are notorious for exhibiting those traits. The AMT on the KWID is appreciably smoother as compared to similar such systems. The perception of a jerk is a tad more pronounced in the two lowermost gears and smoothens out as speeds increase and the gears go taller. There are 5 gears along with one reverse cog, and the ratios seem to have been selected well to offer a good driving experience in a city-highway mix.

As is the case with all AMTs, you need to engage the handbrake on inclines to prevent the car from rolling back. Unlike other such systems, however, even feathering the throttle would make the KWID AMT to move forward. Few other similar cars require you to literally yank the  accelerator pedal, making the car lunge forward almost uncontrollably. 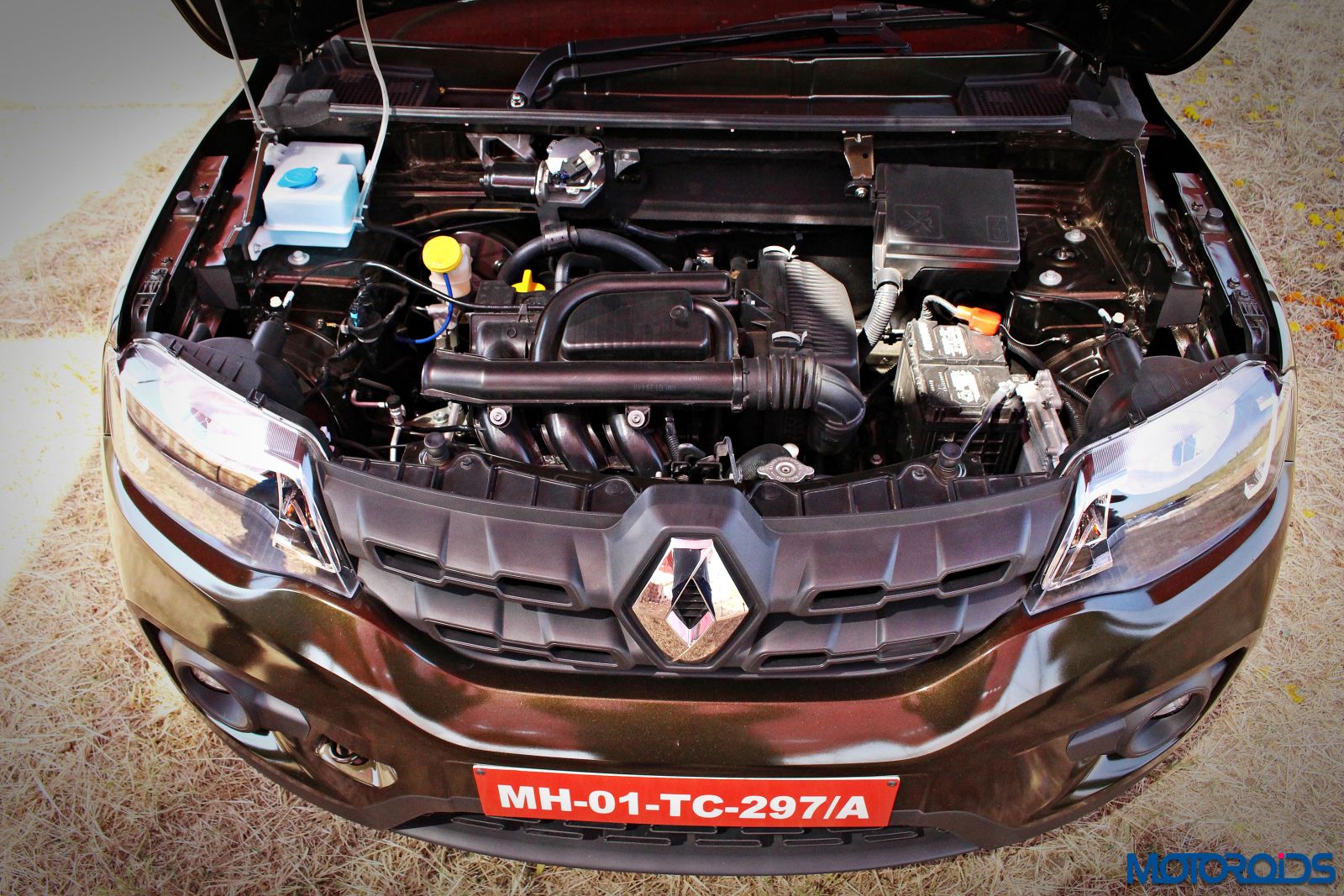 Another highlight with the setup here is its ability to respond to throttle inputs in a predictable, reassuring manner. The Easy-R AMT isn’t on dope while swapping cogs and doesn’t exhibit an overly slow or unpredictable pattern. The shifts come marginally later than on a conventional torque converter automatic, but a heavier foot foot would always lead to downshifts, and lifting off would shift to a higher gear. Part throttle inputs are also deciphered rather well by the system’s electronic brain. Hardly ever did we catch the system napping, or confused as to which cog to engage.

Overall, we really think that Renault have managed to tune the AMT on the KWID rather well, better than its rivals for sure. We would have liked the creep feature to be present here, though. While some may argue that it requires you to keep your foot on the brake at all times, even while the car is stationary, and makes it lunge forward from a standstill, it does helps preventing it from rolling back on inclines, which is a possibility with the AMT here. That little gripe apart, we were rather impressed by how the automated version of an essentially manual transmission has been executed on this little machine. 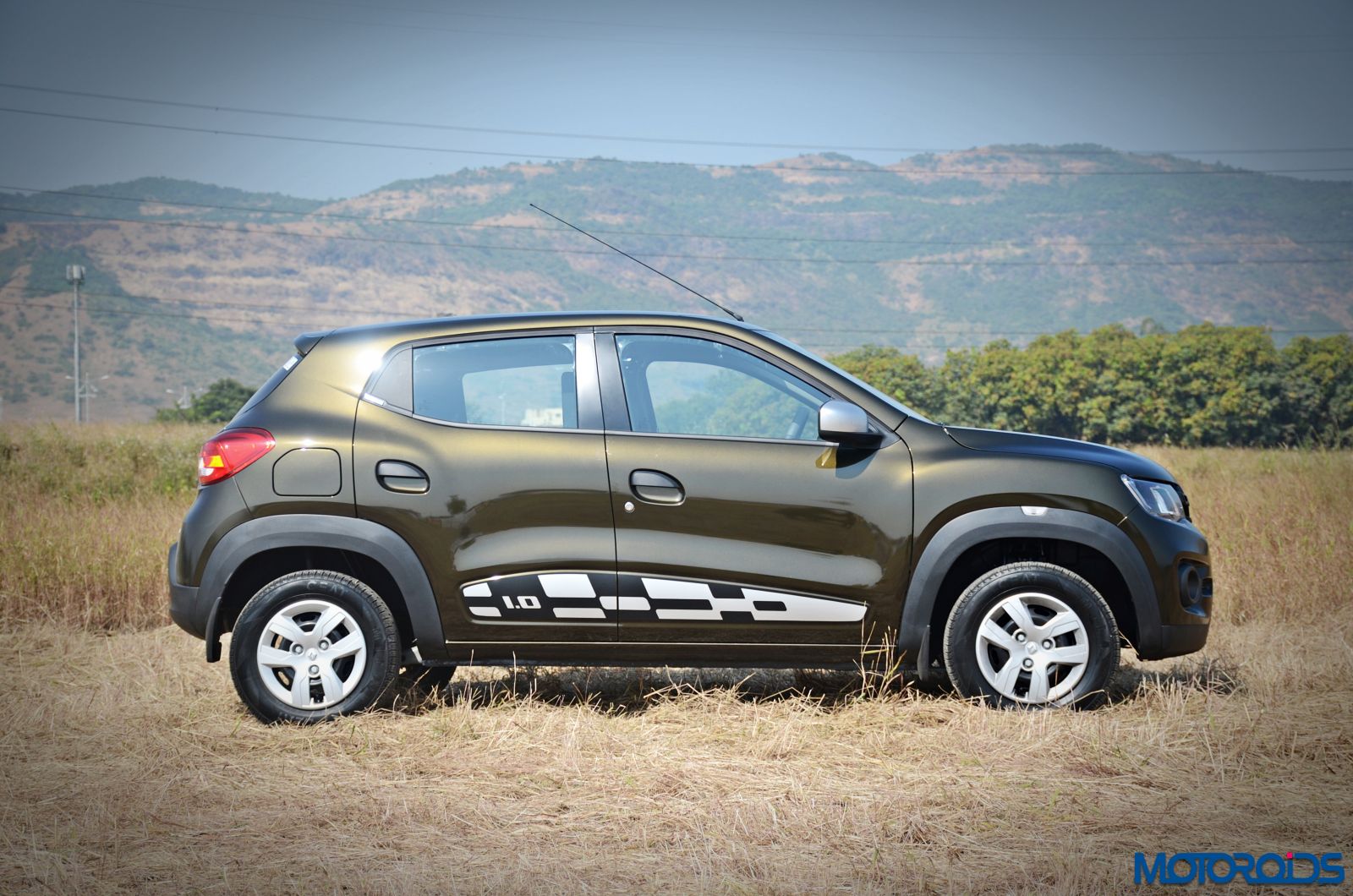 Although our drive was limited to a satellite city of Mumbai, the fuel efficiency displayed on the MID screen of the instrument cluster was in the range of about 16-17 kmpl, which spells really low running costs! Renault India is yet to announce the prices for the model although one can expect premium of INR 30,000-60,000 over the RXT trim of the 1.0-litre variant. With the ever-increasing traffic snarls and higher fuel costs, the Kwid AMT offers a great option to those who want an automatic option without having to break a bank.

Following is an image gallery of the Renault Kwid AMT (Click to expand):