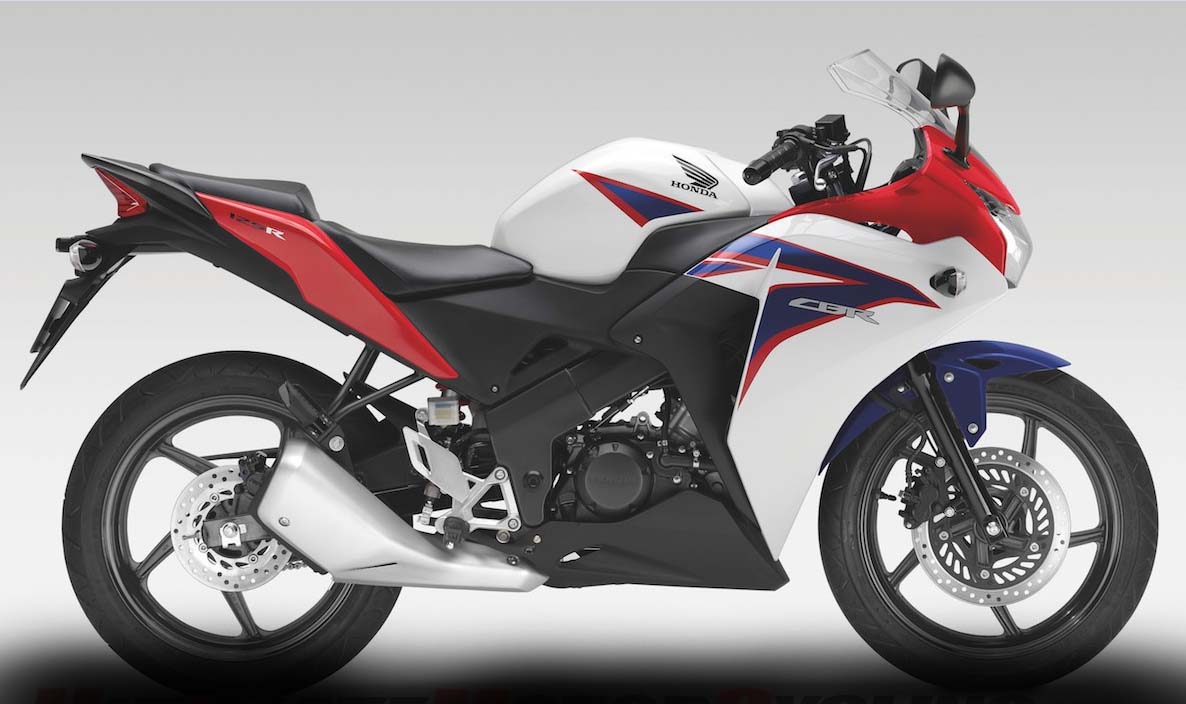 One of the most active contributors on Motoroids forums, and a leader on our Talks platform, Deepak Dongre recently took a good half an hour ride on the new CBR150R. He writes about his first impressions of the bike

I recently went to Vihaan Honda to be a part of the ceremony of taking delivery of a tricolor CBR250R belonging to my friend Satyajit Lade.

To start off with this was a small test ride- not one that I asked for, but Mr. Kishore- Director of Vihaan Honda Dealership himself offered me a test ride of a brand new Orange CBR150R that was on display inside the showroom and asked me for a feedback once done. As always, I tried to make sure that I to do all the things I could during the short ride to see how the bike behaved. The orange bike in the pictures is the same machine I took out for a spin.

To start with, the styling and aesthetics are good. The bike looks big, the front half can be mistaken for its bigger brother the 250R. It’s only when you move your eyes towards the rear half, you realize that you have been mistaken. The biggest giveaways are the narrower tyres, the stickers which scream 150R and for the trained eye, a shorter wheelbase. 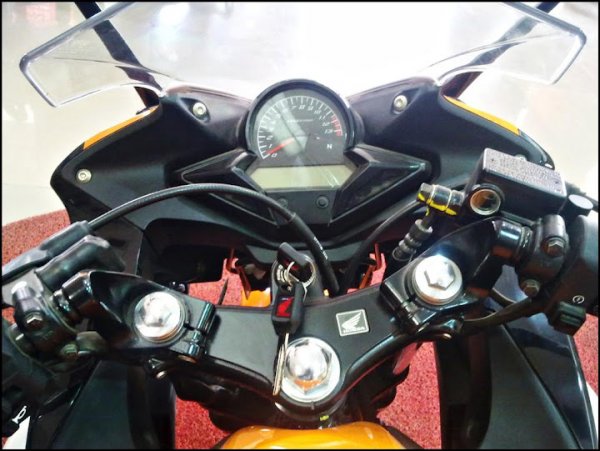 The paint quality is indeed very good. It looks deep and well finished all throughout. The green-black combo looked the best to my eye- looks really mean. Graphics could have been better- sharp and edgy instead of splattered on look. Observing some other parts of the bikes made me have a mixed opinion. Some parts and equipment are really good, while others are equally disappointing.

To begin with, the better things:

1) Brakes, both up front and at the rear are NISSIN
2) The clip-ons are well finished
3) Perimeter frame chassis for such a small engine should ensure great handling
4) The rear-set design is nice,
5) The engine block and cylinder are aluminium finished and from what the CBR Technician at Vihaan – Abdul told me, the engine case is naturally black coloured and not coated, so no issues of paint chipping off etc. 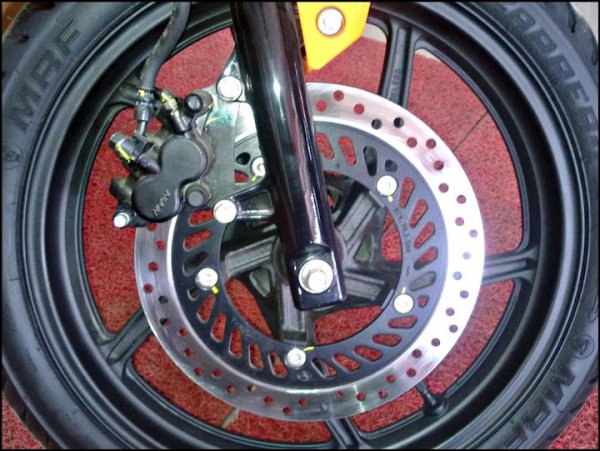 All this makes me really jealous as I would have wish to have all these on its elder and expensive sibling, and I own one

1) The switchgear seems to have been ripped off from cheaper commuter bikes. The mechanism of the light switches is in the old-world vertical movement fashion. No engine-kill switch, no day flasher.
2) The pillion pegs don’t look that great either- reminds of the old R15.
3) Brake and gear-shift levers are similar to the CBR250 – they look rather crudely finished.
4) The paint job on the frame could have been better- a glossy finish makes it look slightly uneven- a matt finish would have been much better. Same goes for the forks too.
5) The instrumentation console, though a similar to the CBR250, could have been better finished. The simple white font and markings look plain-Jane and boring.
6) I might be nitpicking- but the sprocket could have been well designed- doesn’t looks sporty enough and the chain is comparatively thinner/narrower than the 250.
7) Monoshock is a straight bolt-on to the frame, not linked type, like on the R15.
8) The rear tyre could have been something like MRF Revz or a completely different design. The Zapper Q to me doesn’t look a suitable option. 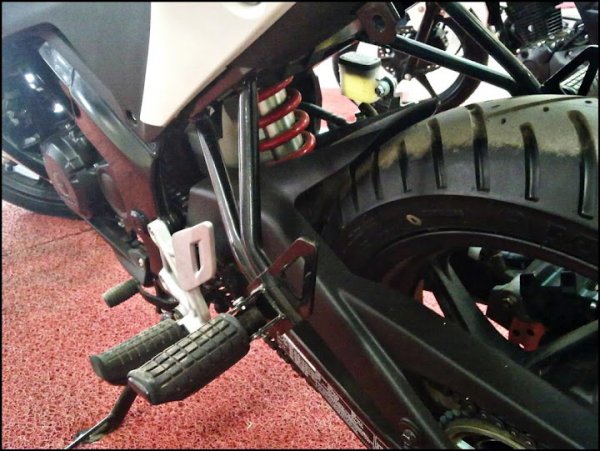 As said it was a relatively short ride and hence can’t speak much on performance at higher levels and plus had a pillion on board.

1) Engine is real smooth (much smoother than the 250)
2) Gearshifts are absolute bliss, am not bragging/over-exaggerating. It’s the best gearbox I have ever operated. A slight dab and the cogs slot in place. No noise whatsoever, not even a click – but the feel tells you that they have settled in the right place.
3) Suspension is nice and soaks up the bumps very well. The suspension feels softer than the 250, but the front doesn’t dive.
4) Brakes are lovely- at first it felt like it was a C-ABS system, no exaggeration again, am being utter frank. The brake levers offered great feedback, were nice to modulate and had ample bite too.
5) The bike feels fun to ride, it revs up quickly, feels light (of course it is) and can change directions in a hurry at a flick. Also, narrower clip-ons (like the ones on the R15) aid the process with lesser effort when compared to the 250 which has wider bars.
6) Doesn’t feel at all like a 150- feels much powerful. In fact I felt It’s got better low end grunt than the R15 V2. 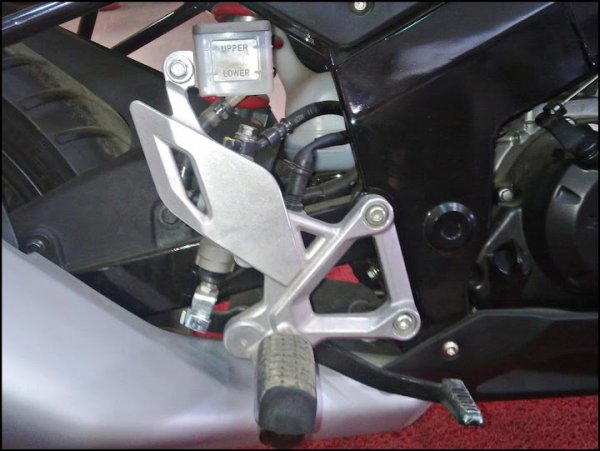 That is all I can share. My heart says riding this one would be really fun. It’s light, nimble and really effortless. I could feel all this with a pillion on, and am sure riding single would be a delight. To add, pillion comfort on this bike would be much better than the first floor seating of the R15. Rider comfort is no different- it’s better than the R15.

I wish Honda could have given that extra attention to details and finish at certain places. While those inconsistencies may be visually jarring, they may all be comfortably forgotten and forgiven once you start riding this bike. There is, however, another problem that spoils the feel-good factor though – the price! INR 1.38 lacs OTR! Considering the downsides highlighted above makes it an expensive choice especially when compared with its direct competitor, the R15. The CBR150R looks even more pricy when compared with the yummy KTM 200 Duke. The Austrian machine, even with its fantastic build quality, higher power specs and tear-away performance is cheaper than the 150R. And we have not even brough the Pulsar 200NS into the equation yet, which is going to be even cheaper, and has an unparalleled brand following in India.

Having said all that, there may still be takers for this one- specially the CBR fanboys, who ideally would want to be seen on the bigger Ceeber, but couldn’t afford it. The CBR150R offers them a 250 lookalike for a cheaper price. A practical comparison on paper, however, would make most of the rational buyers drift away from the 150R though. The CBR150R ‘MIGHT” outperform the R15 in a head-to-head shootout, but the margin isn’t going to be big enough to justify that hefty price tag. On the pricing front, Honda, in my opinion has gone terribly wrong. A second thought on that price tag is most definitely needed.

My thanks to Mr. Kishore for offering me a test ride and patiently listening to all my dislikes about the bike. He stated that he will pass all the feedback to Honda. I was amazed at his level of patience considering he listened to my rants on not just the 150R but also the 250R. He did mention that the new CBR comes with a slight CDI/ECU tweak, but not sure if it has made the biker quicker/faster.

On a general and different note from the topic, for guys who take their CBRs to Vihaan Honda Service can speak to him in case unsatisfied with the service. He personally looks into these matters and the same happened in my case too. From the experience of my friends who have serviced their CBRs at other service centres- I would say Vihaan Honda Thane is the best place to get the CBR serviced.

Sorry for going off the topic. So that’s “THE END”