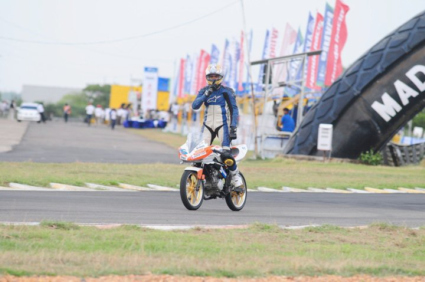 When R15 was launched two years back, most of the journalists loved it, most of the racers loved it, and most of the wanna-be racers loved it. We all know about the bike’s character, the way it tackles corners, the way its tacho eats up the the ‘X1000’ digits, the way it gives us all the much needed adrenaline rush and the feeling that even we can be Rossis and Lorenzos(of and on our race-tracks, of course). But there was something which the bike couldnt manage. As it had a 150cc unit, the power, although way better than the competetion, couldnt keep it as fast as its BAAP on the track(excuse my language but there isnt any other word to describe a 2-stroke Group C bike). The R15 was faster on corners but on the straights it used to lose every precious second it gained on the corners.

But not anymore. This 150cc superbike(actually the only 150cc superbike we have) manages to set a new lap record for Group B class on the MMRT during the Sidvin FMSCI National Motorcycle Racing championship 2010, round 1. And theres another surprised lined up. The fastest lap was set by Ten10 Racing, a relatively new team but successful one since 2009, the year when it was formed. Sarath Kumar,the young star from Chennai was able to set the record lap time of 2:01.7.

Mr.Joel of Ten10 racing who has developed this engine told us that due to the weather conditions he had to detune the engine otherwise the bike could have gone faster around the Chennai race-track.

Thanks Joel for the pics and the experience you shared with us. We congratulate you guys and Sarath for the achievement and we hope to see more of this stuff.