Home News Subaru sets a lap time of 7:55 around the Nürburgring Nordschleife 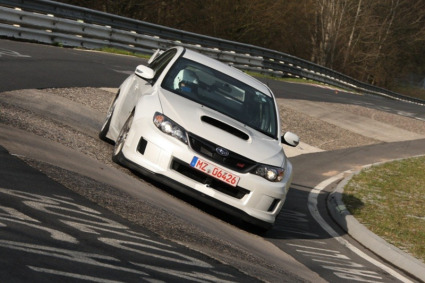 If you read Porsche or BMW’s name and a sub-8 min Nurburgring lap time associated with it, you won’t find anything odd in it. But if you see Subaru’s name, you might be shocked, at least a little bit. I was. Theres no doubt about Subaru’s calibre but we never expect it to be fast around the Green Hell. After all we have seen the car going sideways only, thanks mainly to the legendary Colin Mcrae and the the Gymkhana star Ken Block.

The latest news is that a certain Subaru has posted a time of 7:55 for a lap round the ‘ring. The car used was a 2011 Impreza STI sedan. So how did they manage to do this. Simple! They sent the four-time World Rally Champion Tommi Mäkinen in a Scooby to the Nurburgring to set a complete a lap as fast as he could. The car was given a bigger turbo unit and a little bit of weight reduction too. All this labour was good enough to make the Impreza cross the start-finish line a whopping 4 seconds earlier than what Subaru guys managed in 2004, making this car  “The Fastest WRX STI Ever.”

The whole lap was recorded using HD camera and the in-car footage can be found here.

I am still wondering how Tommi resisted himself from doing Scandinavian flicks around the track.