“The Legend is Coming Back!”

This is precisely what the invite that we got for the media drive of the new Skoda Octavia read. More often than not, we pay little attention to such taglines and dismiss them off as yet another attempt by the marketing guys to act clever. However, the aforementioned tagline did manage to invoke memories of the good times we have spent with the 5th gen Skoda Octavia (the first Octy for India) and we were quick to wonder if the latest generation Octavia would repeat the success story of its forebear.

The 2013 Skoda Octavia is being expected to step into our car market early next month and we recently spent a couple of days testing the latest gen Octy in the picturesque Himachal and on the splendid roads of Chandigarh.

Following is our First Drive Impression of the diesel variant of the new car. Check it out to know if all the rumpus surrounding the new Octy is justified. 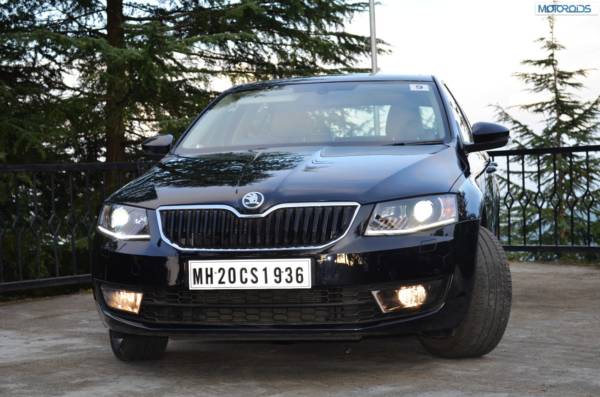 We can go on talking in length about the new car’s styling. However, here is a brief summary of the 2013 Skoda Octavia’s exterior design.

Urbane, contemporary and chic are the words that best describe the car’s front end. Worth mentioning here is the fact that while the car’s front fascia manages to look as modern-day as that of any mid-size European sedan, the car retains typical Octavia design cues such as rectangular headlamps and centrally located hump on the hood. 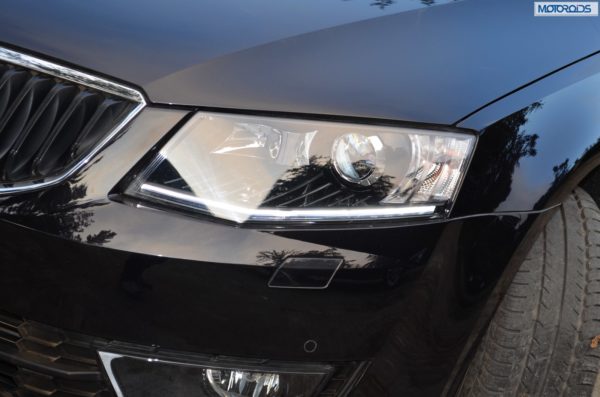 The headlights are angled slightly upwards at their terminal ends. This, along with the DRLs, help with imparting the car’s front end an aggressive look. Also helping with matters is a well defined crease flanking the headlights and running right into the front bumper. The design cues from VisionD Concept can be found in abundance on the bumper of the car. The slim central air-dam and the angular fog lamp housings have been directly lifted from the much publicized concept. 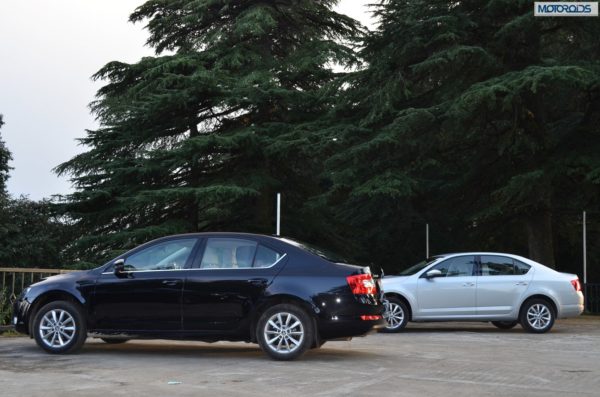 When viewed in profile, initial impression is that of the car being really loo……ong. Compared to the last gen Octavia (aka Laura), the rear windows have definitely grown in surface area. The rear window on the new car also features a quarter panel with a pronounced black cladding around the aft portion. The top of the line Elegance variant is shod with very tasty looking ten spoke alloy wheels. 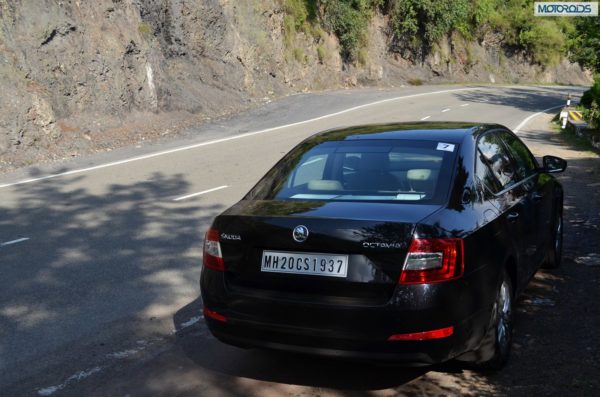 Rear is where the car has got the minimal drama. The rear of the new Octavia has striking resemblance with that of the smaller Rapid sedan. When compared to the outgoing model, the new Octavia’s bumper is more angularly cut out and the boot seems to be taller than before. 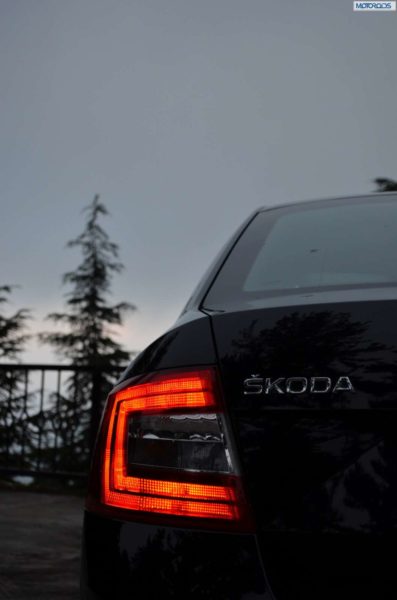 The C-Motifs in the tail-lamps, which made its first appearance way back in 2005 on the taillights of the Roomster, shout Skoda and further help the car with boasting of a familiar look.

Summing it up, the exterior of the new Octavia looks athletic and very classy. On the same time, it has this understated sense of purpose that the Octy has always been famous for. We love it! 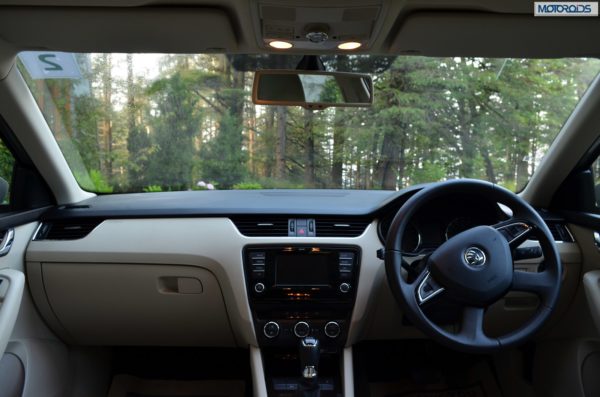 The interiors of the new Octavia are as contemporary as the exteriors. The car comes with a dashboard design that is characteristic of most entry level luxury German sedans and the usage of soft touch plastics further elevate the premium-ness quotient. The new Octavia gets a classy four spoke steering wheel which comes draped in leather and sports the new Skoda logo. 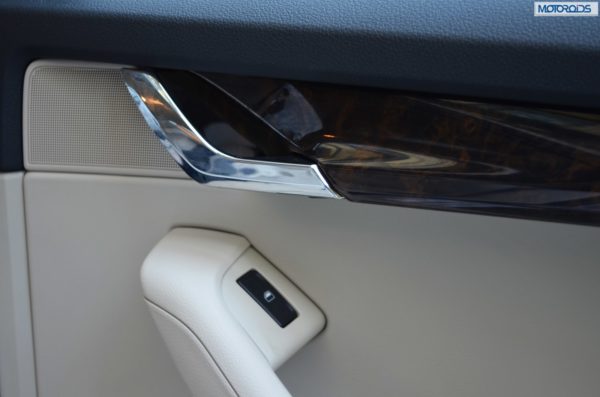 The usage of high quality wood inserts, along with ample usage of chrome on the knobs and around steering mounted buttons, further enrich the visual appeal of the interiors.

Cutting the long story short, it can be said that the interiors of the new Octavia are very pleasant on the eye and manage to impart a hint of clinical precision that some bigger and pricier German limos are known for.

The flipside? Well, you might be disappointed if previous Honda Civic like interiors are what you have been looking for. (We weren’t)

Go to next page to read about Space and Equipment

As we have been saying since ages now, the Octavia has grown in size and all this increase in length translates into only one thing- increased cabin space. This increase in length is thanks to the MQB platform, which endows the Octy with a longer wheelbase. Hence, it is only logical that the passengers of the new gen car enjoy more space to stretch their legs.

The front seats offer almost an acre of leg space and only the most heavily built and tallest of gentlemen might complain about the space on offer. At the rear, the passenger enjoys almost ‘Superb-like’ leg-space, along with sufficient elbowroom and headroom. 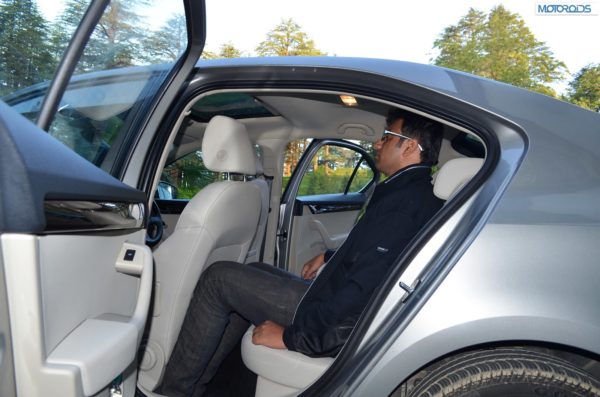 Yours Truly (Height- 5’10”) at the rear, with seat pulled completely backward

It is only when the front seat is pulled completely backward that a rear passenger (with a height of more than 5’8″) might get somewhat uncomfortable. 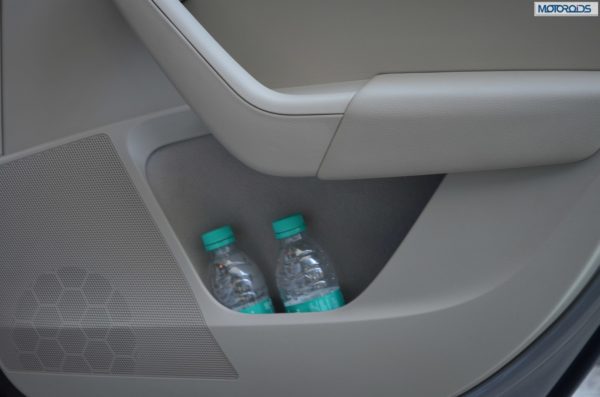 The car comes with several cubby holes and storage spaces, which range from everything from a sunglasses holder in front to sufficiently deep door pockets to hold water bottles at the back. 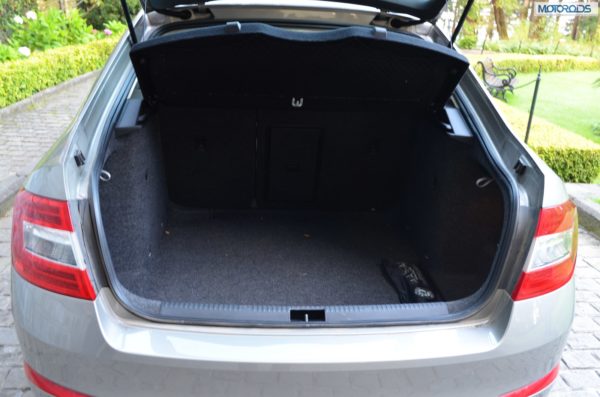 The boot space on offer is phenomenal to say the least. The car gets approximately 600 litres of boot space, which can be bumped upto a whopping 1600 litres (approx.) by folding the rear seat. Adding to the convenience factor are the several hooks that the boot offers.

The car we drove came in the top-of-the-line Elegance trim, which brings along enough bells and whistles to put to shame some of the cars from a segment above. 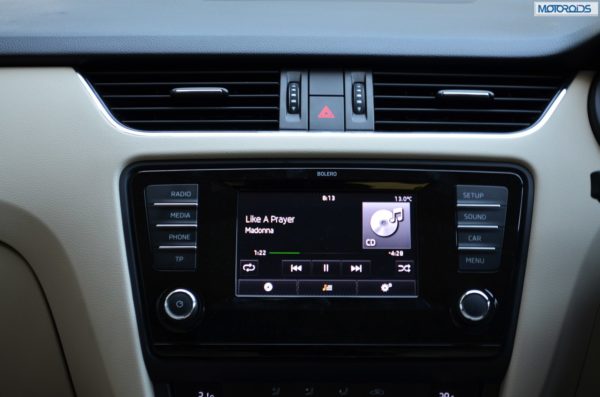 Talking about the shortcomings, the transmission tunnel is pretty high and the fifth passenger might find himself/herself wanting to replace seats with other passengers. Also, the rear seat doesn’t offer a headrest for the middle passenger; definitely no deal breaker but the availability of this feature on some sedans from several segments lower makes us want to mention about its absence on the new Octy.

Go to next page to read about the Engine 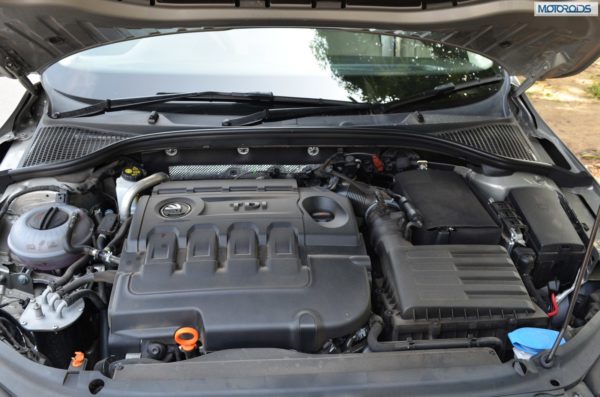 As we mentioned above, the diesel variant of the new Octavia is powered by the same 2.0 litre TDi turbodiesel direct injection diesel engine that powers the Laura. However, for the new Octy, this oil burner comes with 3 PS of additional power and the motor now makes 143 PS. 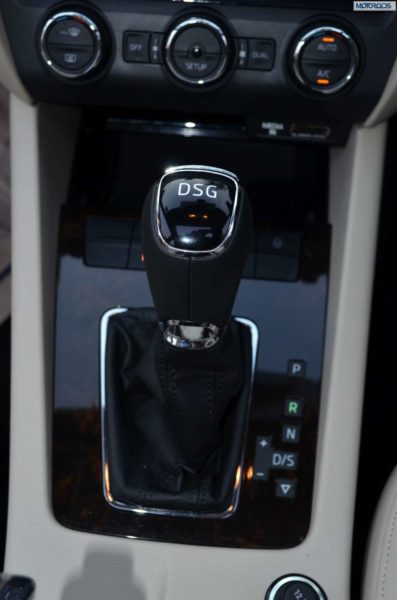 The torque, at 320 Nm, remains the same. The transmission options include both a 6 speed manual and a 6 speed DSG.

This engine has always been known for its free revving nature and we can’t help but admire the willingness this motor has to climb its way to the redline. The car we drove came with a DSG transmission, which, when show the whip, up-shifts at close to 4700 RPM. The shifts can be safely described as seamless and the transmission is pretty responsive to the sudden throttle changes. Such an accomplished unit this DSG box is that it not just makes the drive more convenient than the manual ‘box but also makes it equally enjoyable if not more. Talking about the NVH levels, the cabin is well isolated from the vibrations that the diesel engine offers. However, the motor has a habit to become pretty vocal when given the stick. Not that we are complaining for we thoroughly enjoyed the engine’s healthy sound note.

The ARAI certified fuel efficiency figure for the 2.0 TDI (DSG) is 19,3 kmpl, only 1.3 kmpl less than the manual variant. Easily expect 12-14 kmpl under normal driving conditions. Not bad, eh?

Go to next page to read about the Ride and Handling 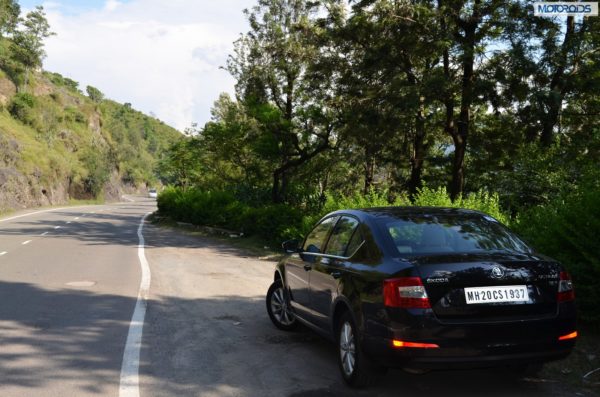 As we mentioned above, we drove the new Octavia on roads of Chandigarh and Himachal Pradesh. This means that the car saw everything from well paved 6 lane streets of Chandigarh to broken and narrow roads of small towns/villages of Himachal.

The Octavia boasts of great ride quality on most roads and only the biggest of undulations on the beaten tarmac unsettle the car. However, just when we were about to term the ride quality as exemplary, we decided to take the car to the broken roads for a high speed drive. What ensued was a lot of clatter from the suspension and a really unhappy rear passenger. While the front passengers emerged fresh out of the car even with some fast driving on broken roads, the rear passenger had less nice things to say and kept complaining about the discomfort he suffered for the rest of the day. As must be obvious to you by now, our little adventure brought out a glaring fact about the Octavia’s ride quality, especially at the rear. While we understand that there are good chances that none of the new Octy owners would ever decide to play the boy racer on broken hilly roads, and earn a lot of hatred from his family members in the process, it is nothing short of surprising to note how the Octavia, which offers a plush ride on most surfaces, sings a different tune when the going gets tough. 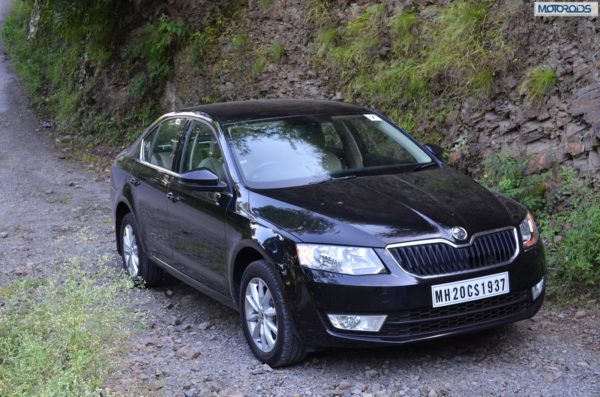 Handling is where the Octavia excels and we can still be found smiling thinking of the fabulous time we had pushing the car in the corners of Chandigarh-Shimla highway. True, the Octavia is no BMW M5 but we really can’t think of the last time we had so much fun piloting a D segment family sedan on a hilly road. The car’s steering, even though an EPS unit, has just the right amount of weight at high speeds and is as precise as a Swiss watch. We really can’t stop marvelling over how the really accurate steering and well controlled body balance make a mockery out of the most challenging of the corners.

Go to next page to get to know our Verdict

There is no doubting the fact that it would be the diesel variant that would become the highest selling of all the engine variants of the new Octavia. The new Skoda Octavia 2.0 TDi definitely feels like it would soon become a force to reckon with.

We recently came to know that the Skoda Octavia 2.0 TDi DSG Elegance could be launched at an ex-showroom price of about INR 17.6 Lakhs in Maharashtra. Such a price would make the top of the line diesel variant quite a value for money proposition, what with it getting loads of high end features, great dynamics and world-class engine and transmission?

We believe that Skoda India has another winner in their hands and the new Octavia could really repeat the success story of the 5th gen model. What Say?

Go to Next Page for 2013 Skoda Octavia 2.0 TDi Image Gallery