The Honda Unicorn has been one of the mainstays of the Honda stable. Setting new benchmarks in engine refinement and with its bullet-proof reliability, the Unicorn except a few cosmetic changes has remained unchanged since inception and continues to have a special niche in the 150cc premium commuter segment. 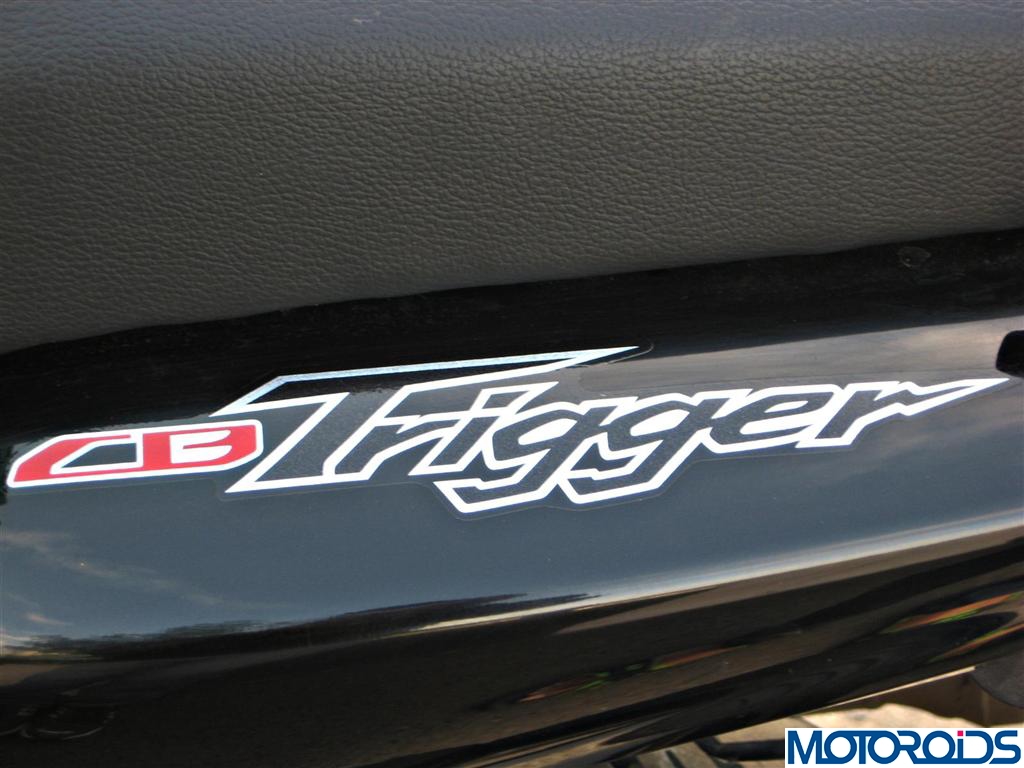 The 150cc segment has heated up more than ever before. The market today offers a wide spectrum of motorcycles with fuel economy to performance as their USPs. In such a tough scenario, the Streetfire inspired Honda CB Trigger was launched as a balance of modern styling, performance and economy. We got our hands on Honda’s latest offering and with monsoon lashing Aamchi Mumbai, it proved far from being a decent testing ground for the bike, which made us take the Trigger to Pune, which surprisingly happened to be drier. From crawling traffic to wide open highways, from well paved flat stretches of tarmac to the broken trail, from arrow straight high speed runs to the twisty ghat sections, from dry sunny hours to dark rainy nights- the Trigger was put to the paces in every possible way we could think in both solo and two up riding mode.

So does the new Honda manage to ‘Trigger’ any excitement? You’ll find out- read on 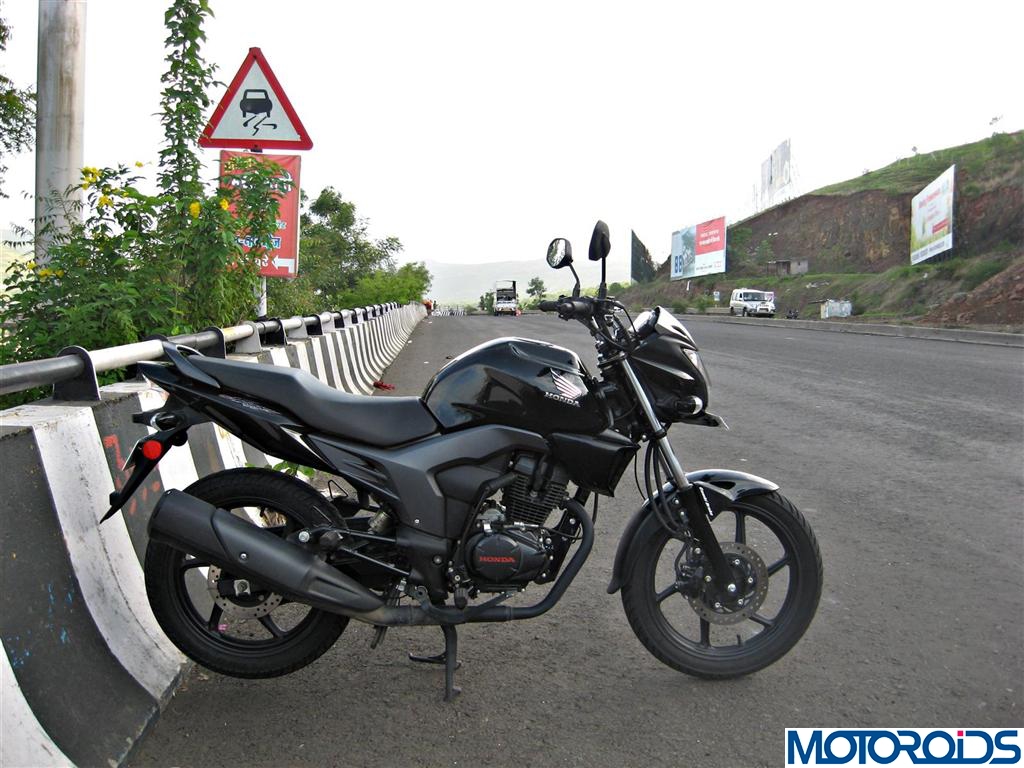 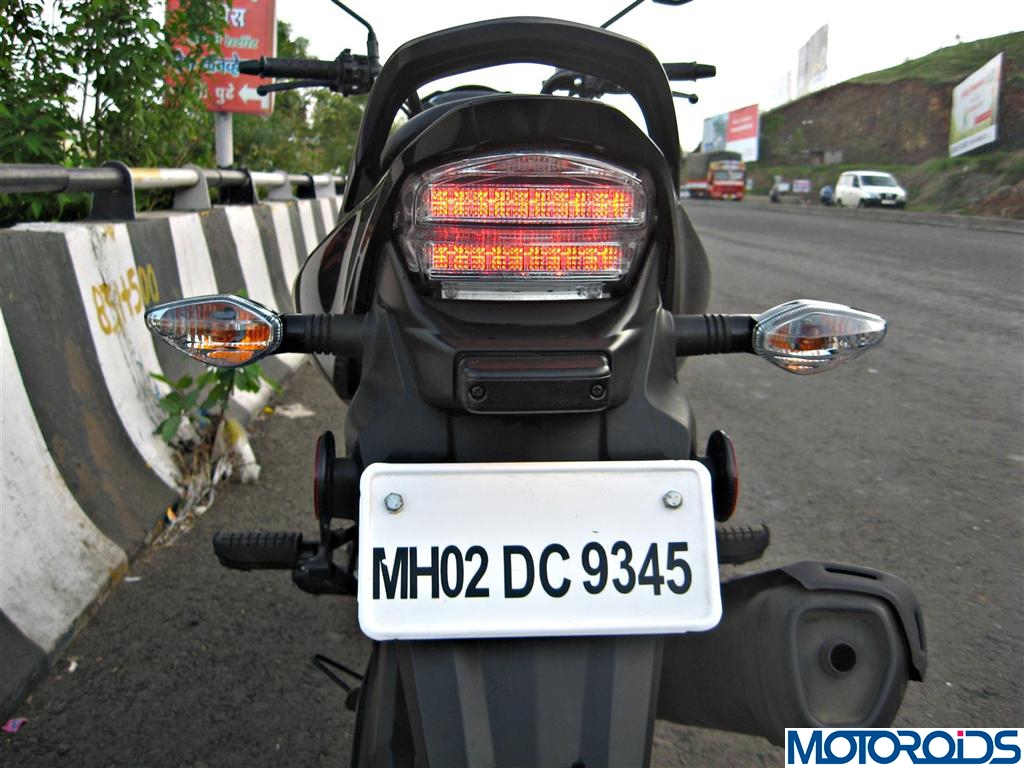 The Honda Trigger is a reasonably good looking motorcycle except, probably at the rear where the chubby LED tail light manages to overwhelm the 110 section rear tyre. The Trigger looks best from the front three-quarters with the oversized faux air scoops (thankfully no sabre teeth here) and the headlight reminiscent of the Honda Streetfire. Endowed with some nice cuts and creases in profile, the Trigger does inspire a second look. 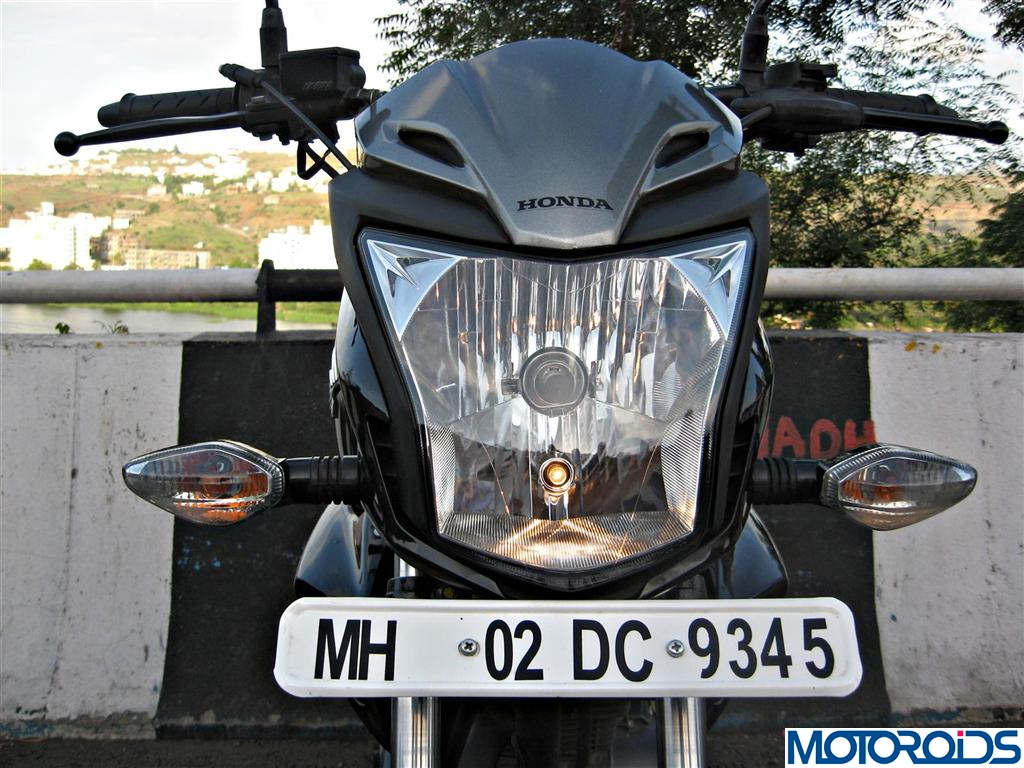 The muscular style statement is expressed convincingly by a newly designed fuel tank and side panels, which appear like a perimeter frame and conclude into a sharply styled rear panel. A new look exhaust befits the chunky look of the motorcycle but is somewhat neutralized by the rear foot-peg assembly. 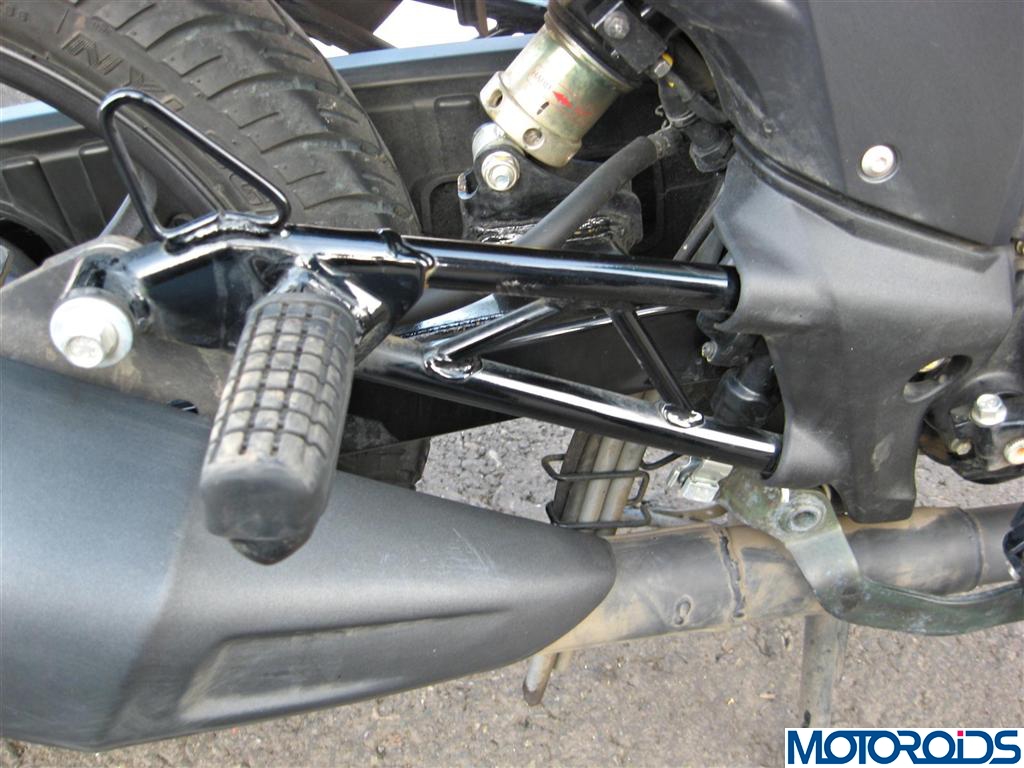 Coming to build quality, the Honda Trigger is a well pressed together motorcycle with top grade plastics and panels with no inconsistency in panel gaps. There is absolutely no plastic buzz or rattle even as the bike is ridden to the limit or taken over bad roads. The paint quality looks great with decent matt finishing on the engine and other metallic surfaces. 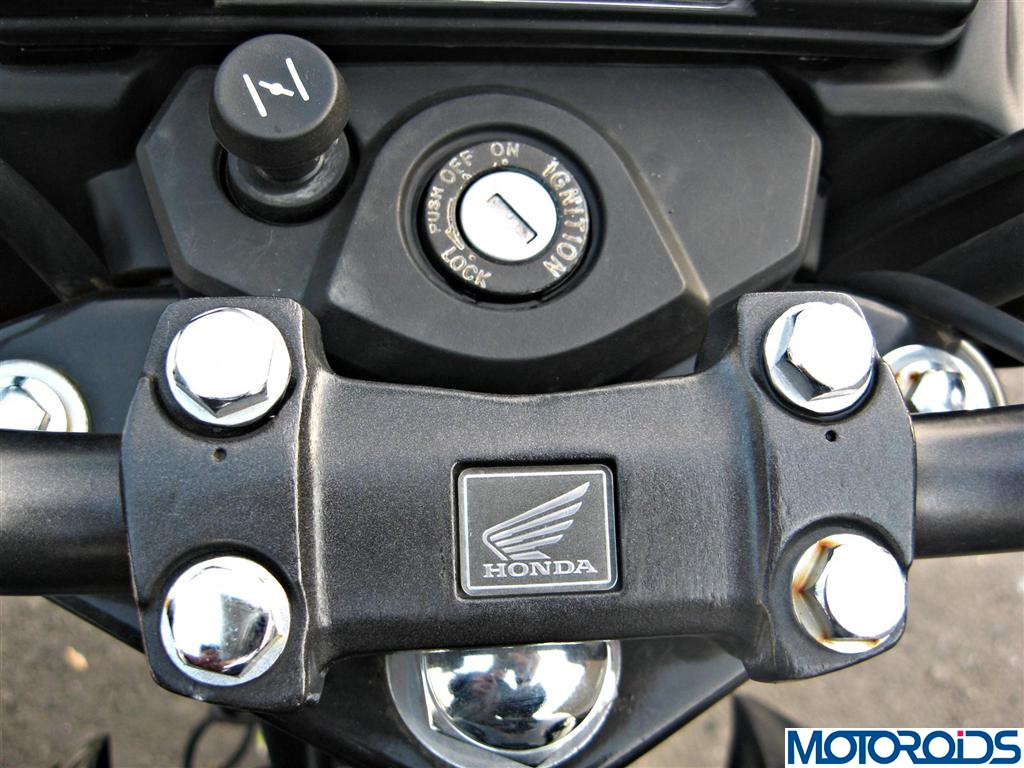 The grips are of good quality and are reasonably soft to grab onto. Mirrors are adequate in size and give a clear view of the trailing traffic. The switchgear got us confused though- both in quality and operation. We were expecting better finished and more ergonomic switchgear on a premium motorcycle. The switchgear seems to have been pulled from a level below, and along with the not so impressive rear footpeg assembly works towards bringing the finesse quotient a little below Honda’s lofty standards 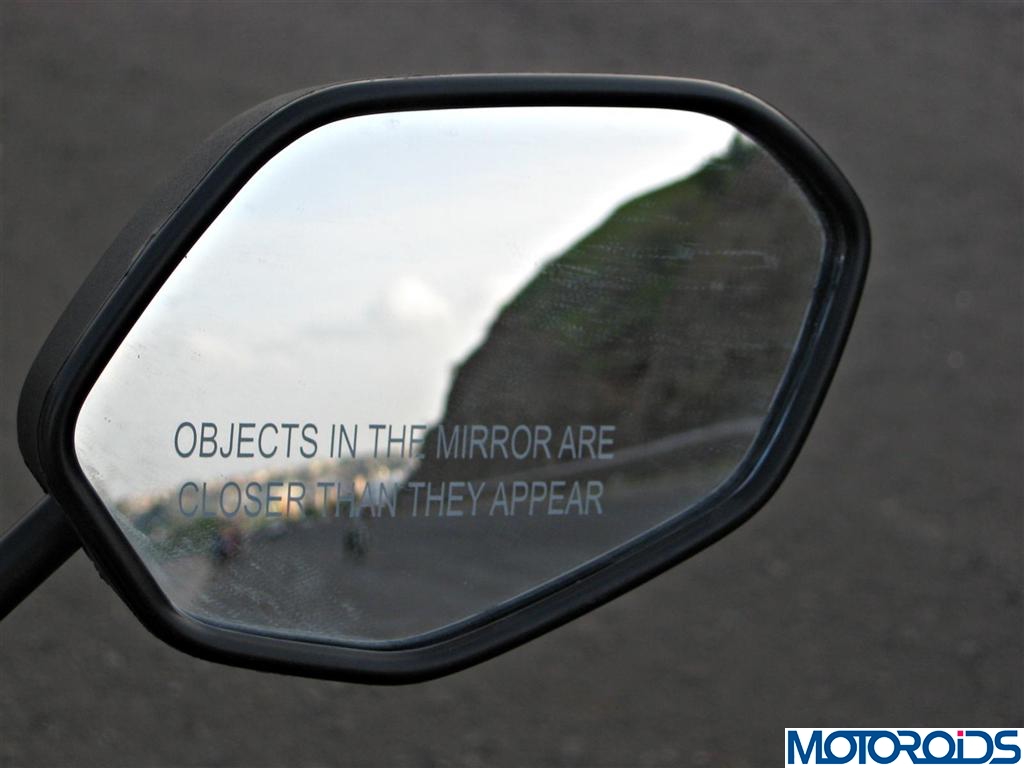 NEXT PAGE FOR FEATURES

The first thing you notice after swinging your leg across on the Trigger is the completely striking new digital dashboard. Delightful in appearance and in stark contrast with the average quality switchgear, it seems to have been taken from a high end motorcycle. Apart from speed, engine rpm and fuel level, the display features a clock and twin trip-meters. The digital tachometer is as accurate as one can get with the slightest of input on the throttle resulting in precise readout on the dash. Same is the case with the speedometer displaying speeds with no lag and extremely sensitive to the slightest of movements at the front wheel. All indicators are clear to read even during the brightest of sunlight and the amber back-lit dash makes it a pleasure to look at in the dark. 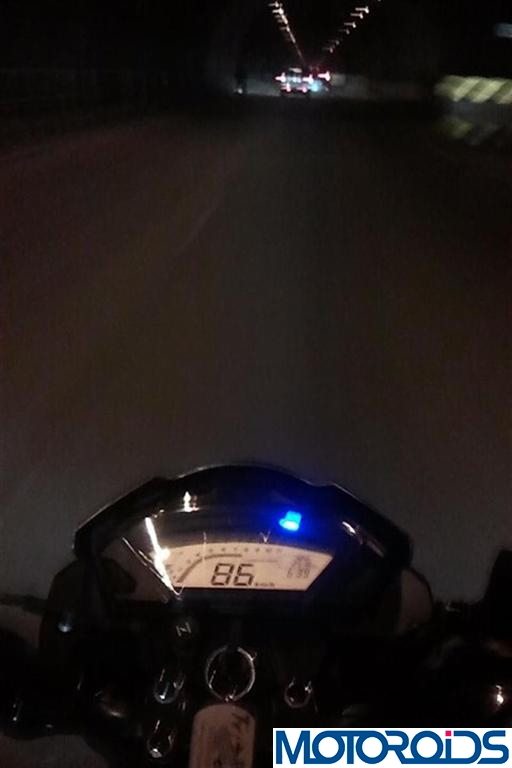 The seat is broad – both for the rider and pillion, with the right mix of cushioning and firmness for a comfortable ride. The grab rails are broad and provide a nice brace for the co-rider under hard braking or while going over bad roads. 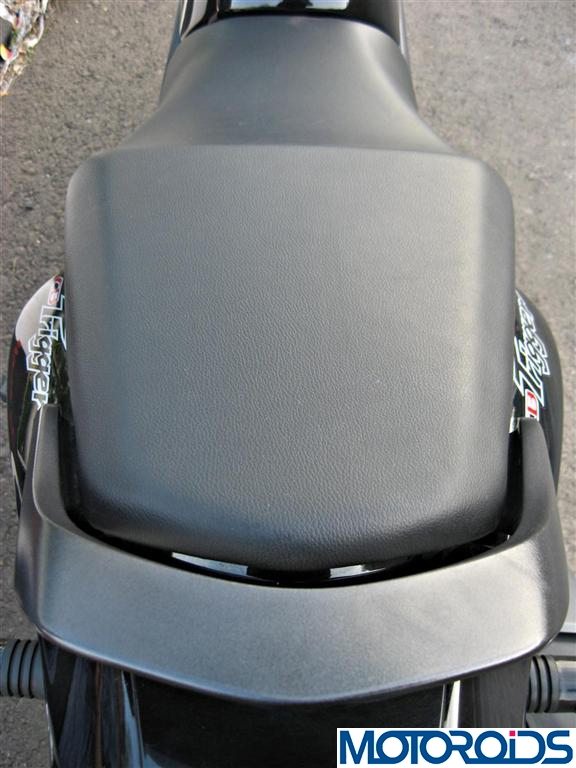 Unlike in the case of the now discontinued Dazzler, the Honda Trigger features a kick-start and a chain guard. However, the biggest inclusion on the Trigger has been the Combi Braking System is available only on the top end variant of the Trigger. While the front disc brake works independently, application of the rear brake links the front brake and is claimed to cut speed in a more efficient manner (how good – we find that out later in the review). The six spoke alloy wheels and the tyres have been retained from the Dazzler. 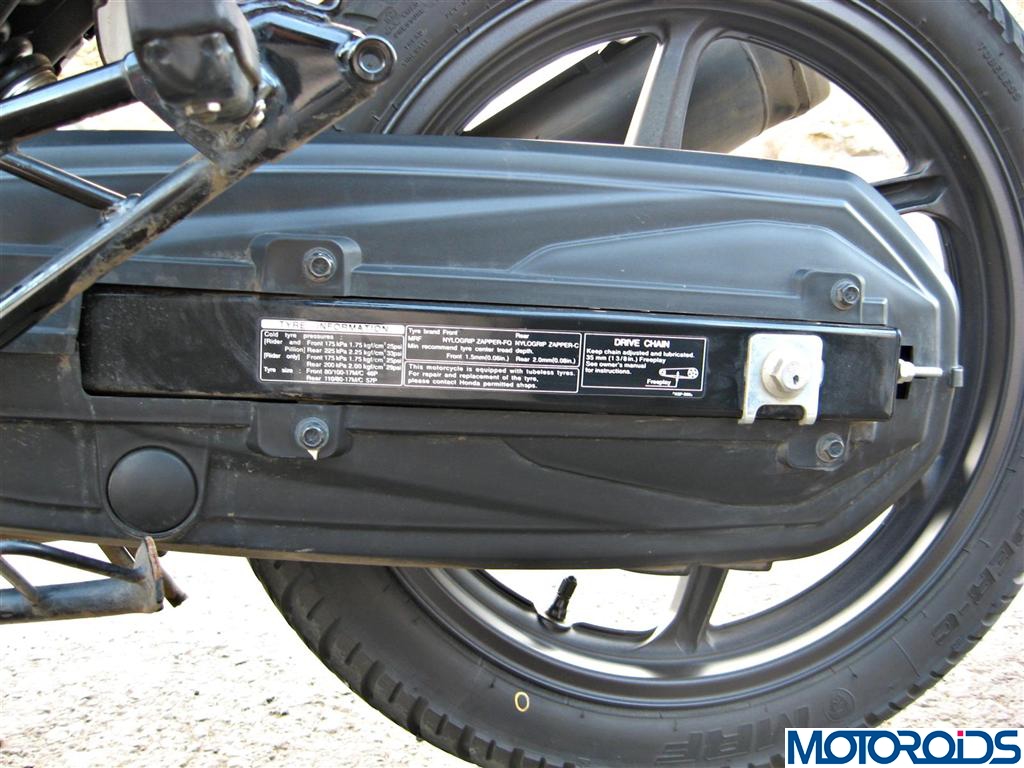 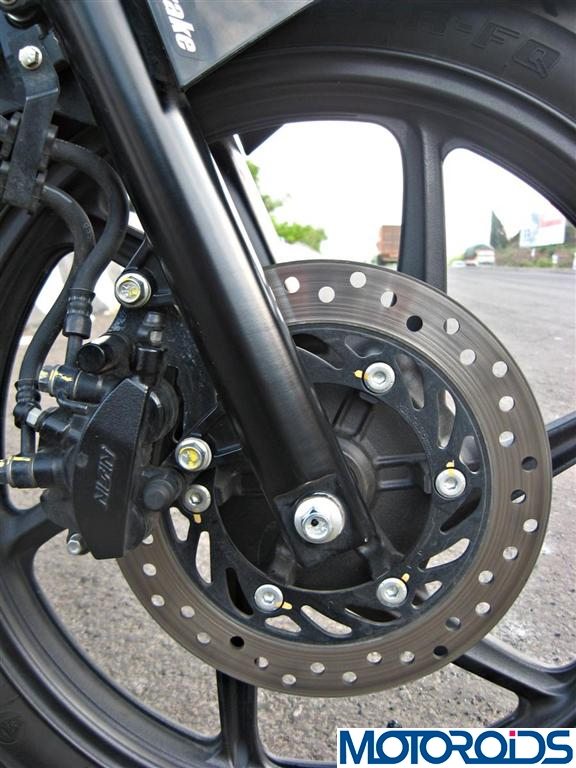 The Honda Streetfire inspired headlight provides ample low beam spread during the night but somewhat loses out on high beam performance. The clear lens turn blinkers are different in design from the Dazzler and do their job reasonably well. 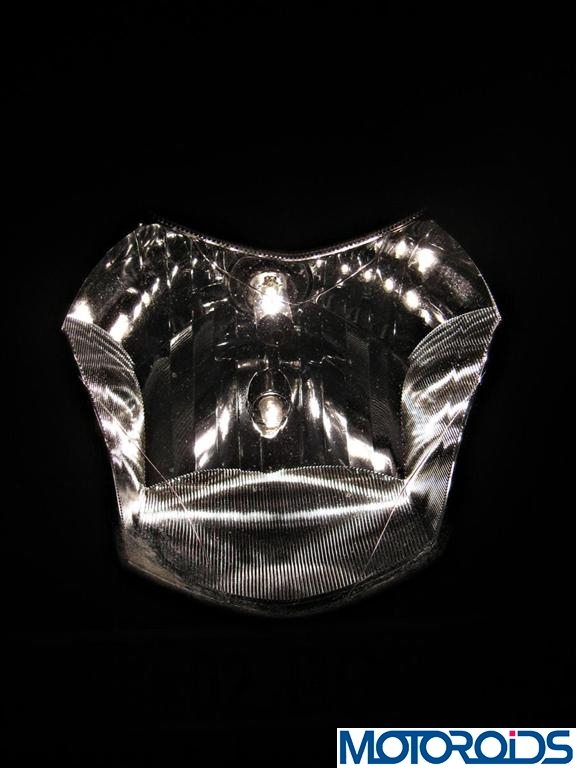 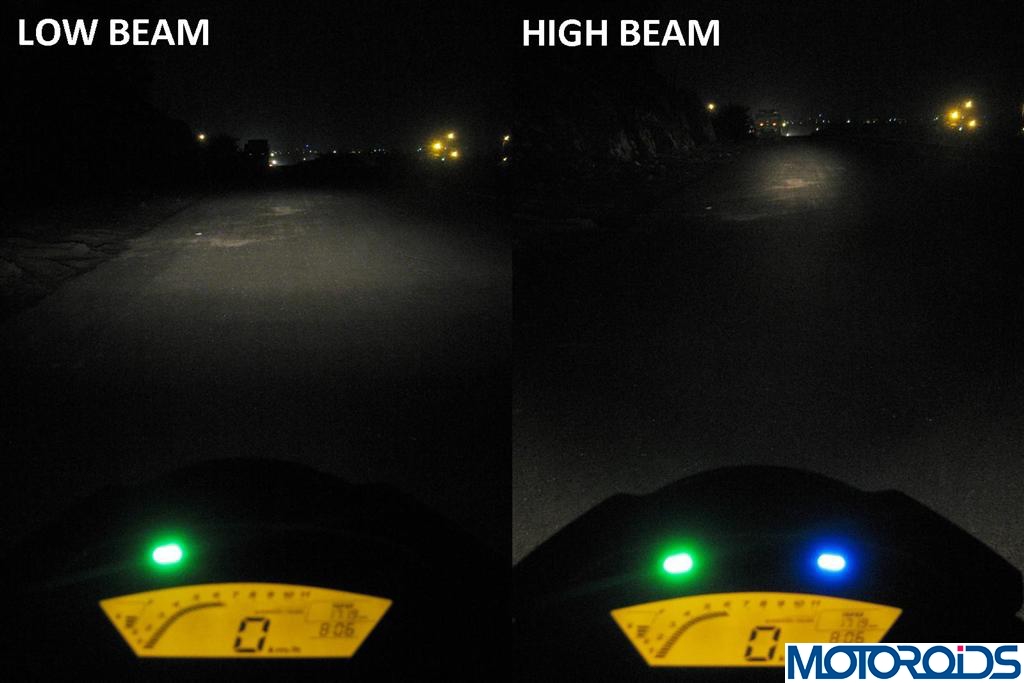 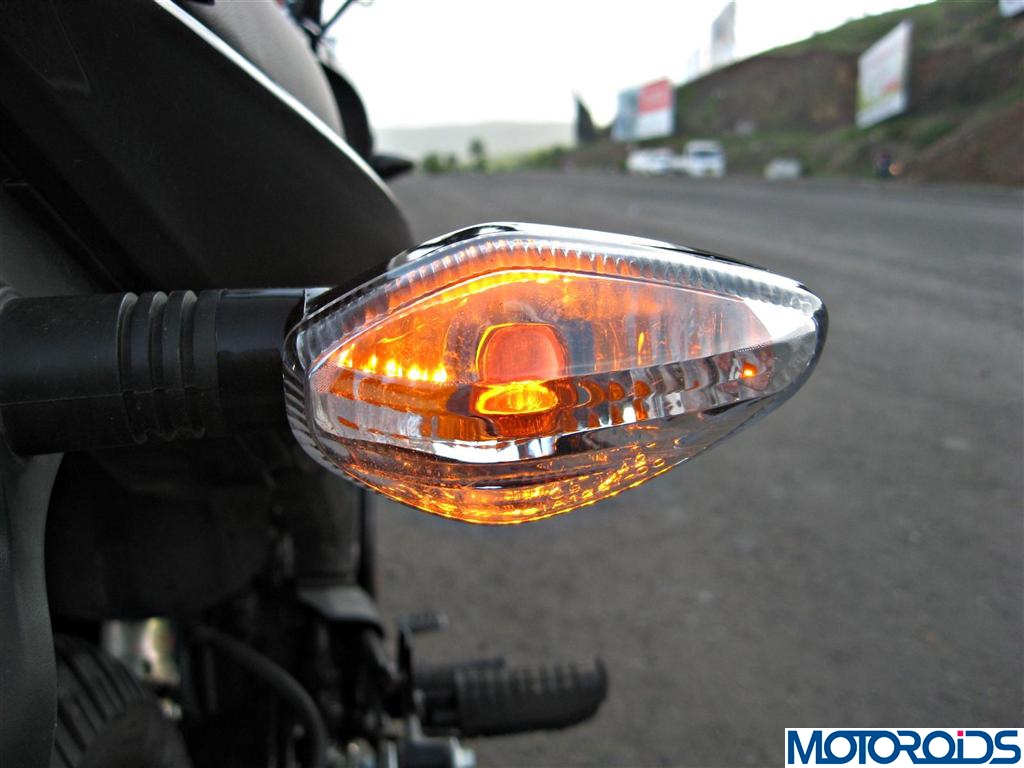 The horn, which is typical Honda and not too loud, could have done with a bit more force. The new LED tail light is a welcome addition and emits ample brightness both during day and night. 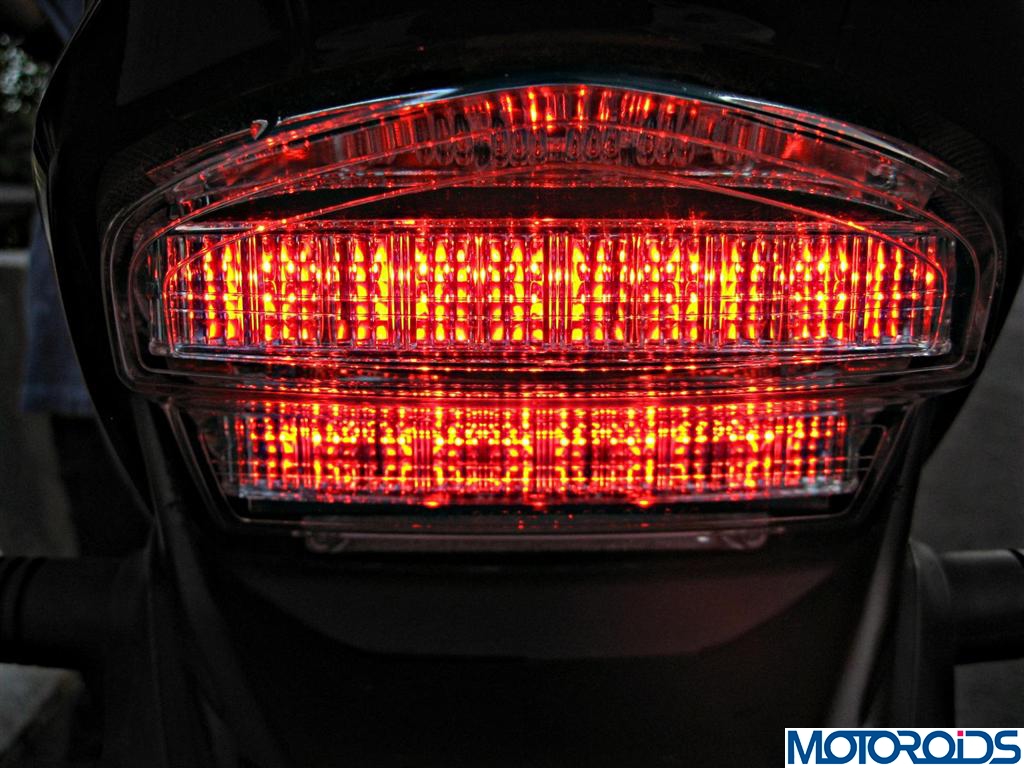 Having been done with the feature highlighting, it was time for us to make the rubber meet the road

NEXT PAGE FOR PERFORMANCE 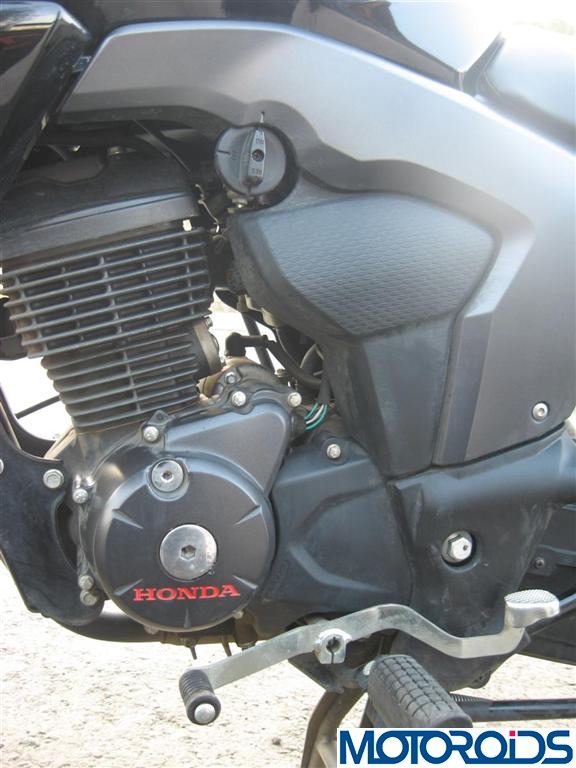 The Honda Trigger retains the Dazzler’s 149cc motor cranking out a similar 14 bhp @ 8500 rpm and torque output of 12.5 nm @ 6500 rpm. A light dab on the starter is enough to fire the engine to life in typical Honda fashion. Similar to the benchmarks set by the Unicorn the engine is hardly audible during idling and extremely rev-happy retaining the refinement throughout the rev range. Its only while hitting the rev limiter at the 10,000 rpm mark does it starts showing some sign of resistance. We pushed the Trigger to its rev-limit (10,000 rpm) and following are the speeds the Honda managed to hit on the speedo: 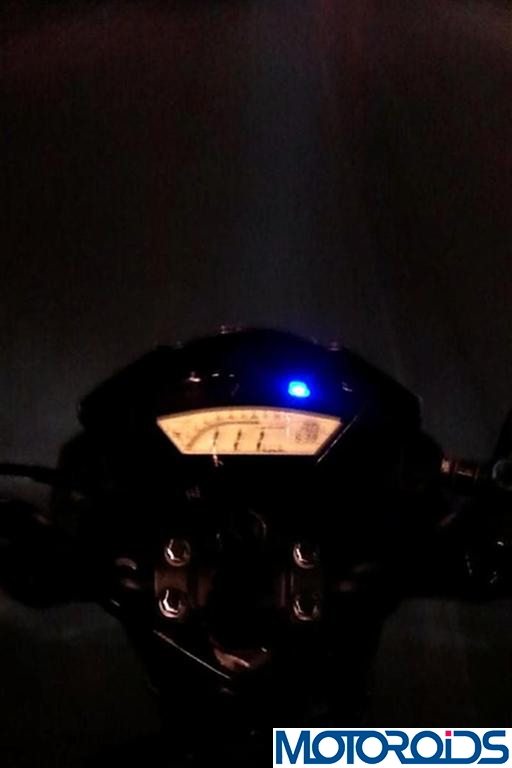 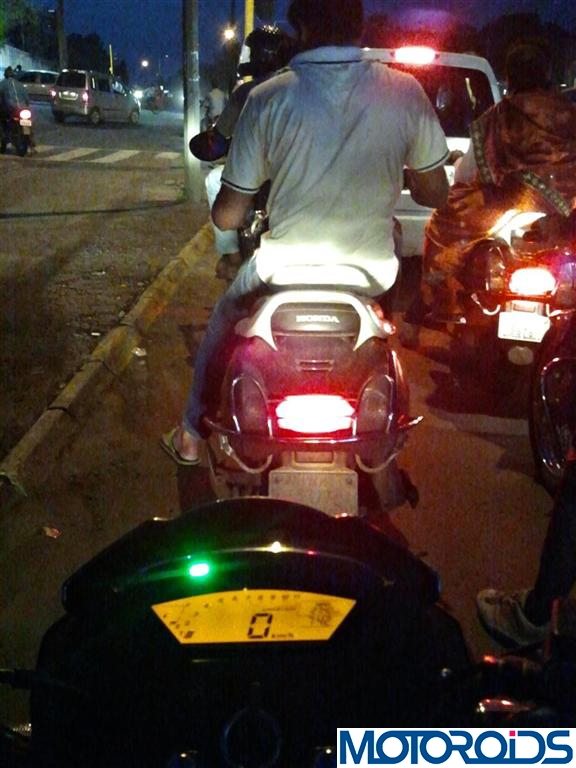 The smooth Honda motor is mated to an equally slick 5 speed gearbox with a universal one-down five-up shift pattern and retains both the toe and heel shifter unlike the toe-shifter on the Dazzler. Complemented by a light clutch, the gearbox is effortless and precise to operate, the shifts affirm the gears having slotted in their right place. Being closely spaced, the gears are on the shorter side as evident in the speeds vis-à-vis the engine revs mentioned above. Though this suggests a high revving characteristic, the Trigger is an extremely easy to ride motorcycle in stop and go traffic. One can trundle along at 2nd or even in 3rd gear in slow paced traffic and it shows no signs of knocking while moving around comfortably at 25 kph in top gear. Wring the throttle thereon and it will gather momentum without the need to downshift.

All in all, the engine is a delight with its high levels for refinement. (120 kph for a 150cc machine seems fair enough, unless we’re nitpicking)

When it comes to handling, the Honda Trigger is pure joy. It’s a bike you would love to take every day to the hills and ride hard to your heart’s content. Very predictable in its handling, the Trigger is an extremely nimble machine. It changes direction effortlessly and would hardly ever run wide from your chosen line around a bend. It won’t be surprising to find yourself going faster after every corner- it is that assuring. We happened to ride both solo and two up, but the Trigger didn’t seem to be bothered by the extra weight it was carrying. It attacked the corners with the same poise and intensity widening the grin on our faces till we had our lips nudging our ears. 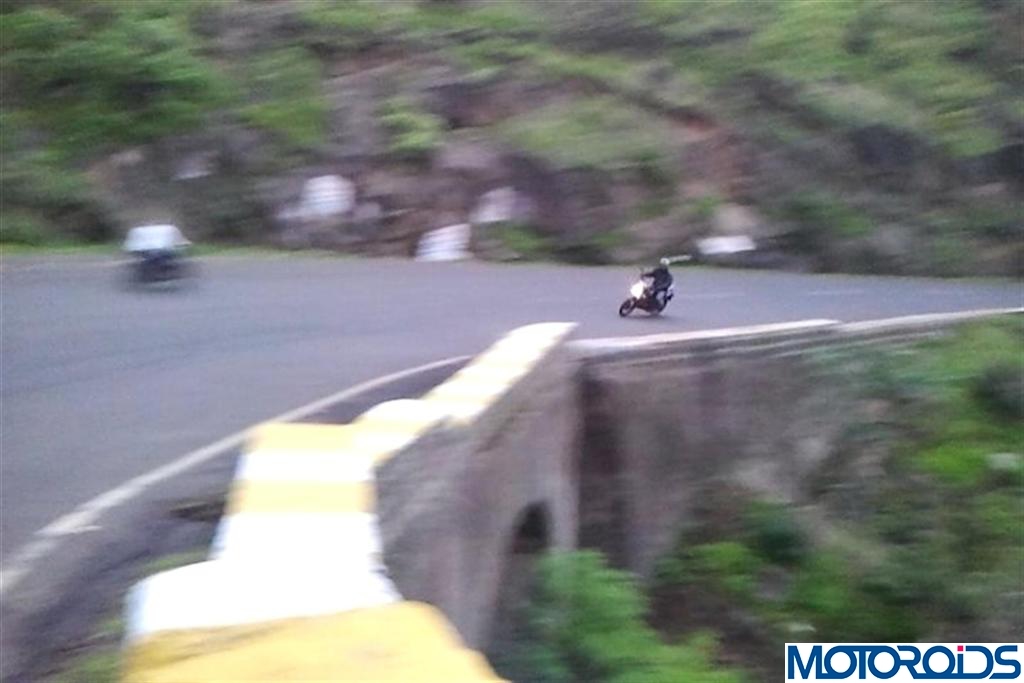 The tubeless MRF Zappers showed great road holding manners both while riding through the wet Khandala Ghats and the Expressway to a dry and twisty laden section of the old Katraj Ghat. Unfortunately we couldn’t get cornering shots (except one) as our cameras ran out of battery power. But nonetheless, the Trigger was an absolute feast to ride and this very trait would come handy while cutting through routine traffic too. 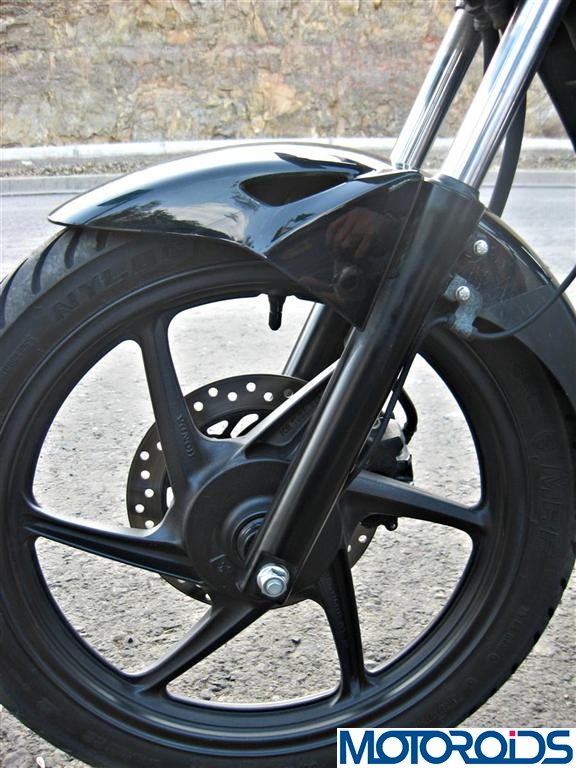 The ride quality on the Trigger is slightly on the stiffer side. Though the front suspension offered optimum travel and resistance, the monoshock felt a tad too stiff on bumps and bad roads. Even while riding two up, we couldn’t feel much travel on the monoshock at the rear with the pillion complaining of a stiff ride. The Trigger was taken for a brief off-roading session and though navigating the bike wasn’t much of a task, the stiff ride turned into a bit of a bother. On one hand where the Trigger delights you on good stretches, on the other, it isn’t exactly at home negotiating rough patches 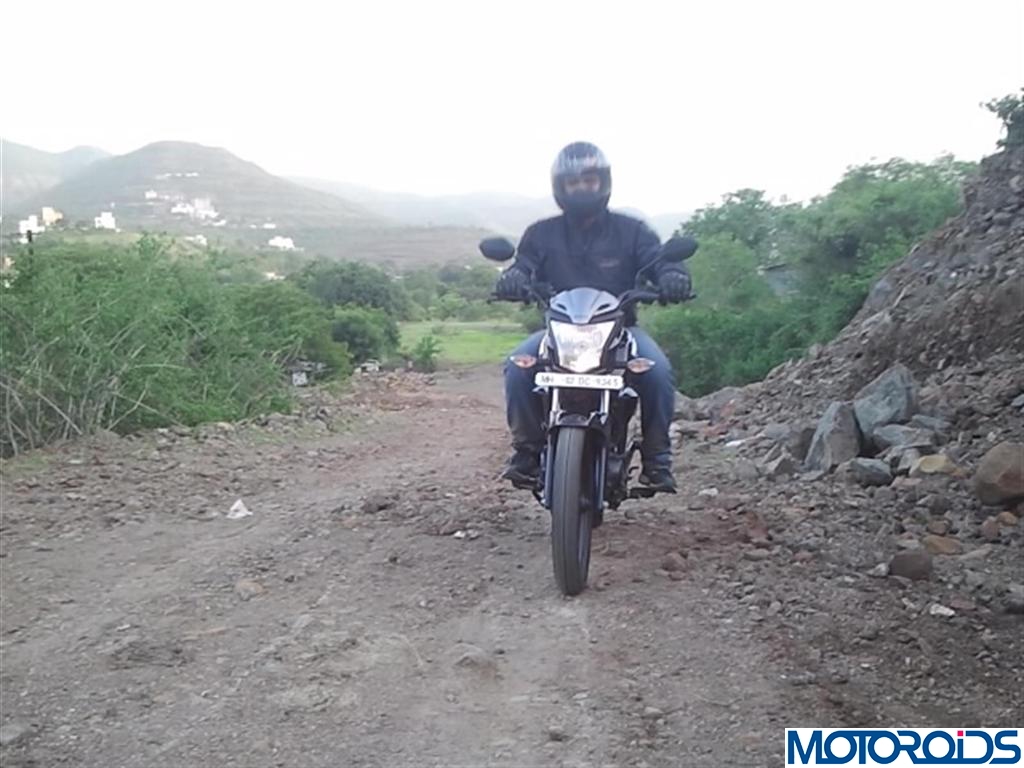 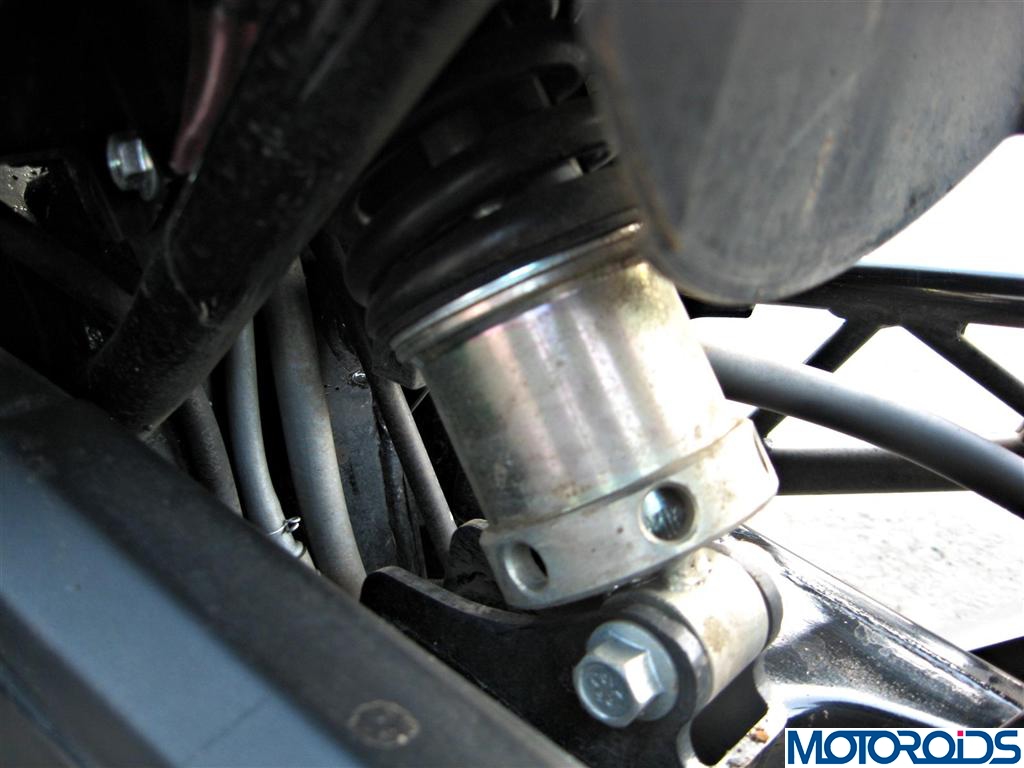 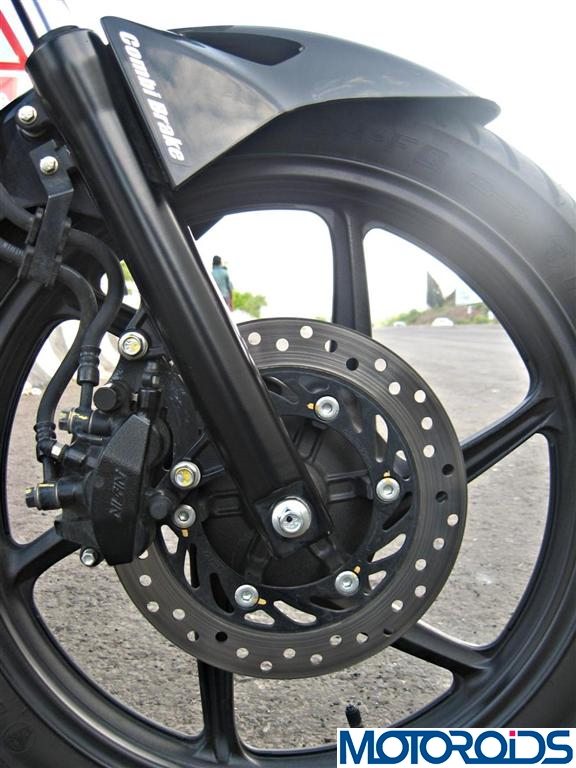 Sporting a 240mm front and 220mm rear disc setup similar to the Dazzler, further complemented by a Combi Braking System (CBS), the braking is another high point of the Honda Trigger. While the front operates independently, application of the rear brake seamlessly brings the front brake into action resulting in smoother slow-downs and stops. As claimed by Honda, the CBS works well and makes braking a breezy affair. We tried some high speed braking both in wet and dry utilizing the CBS and came away impressed. 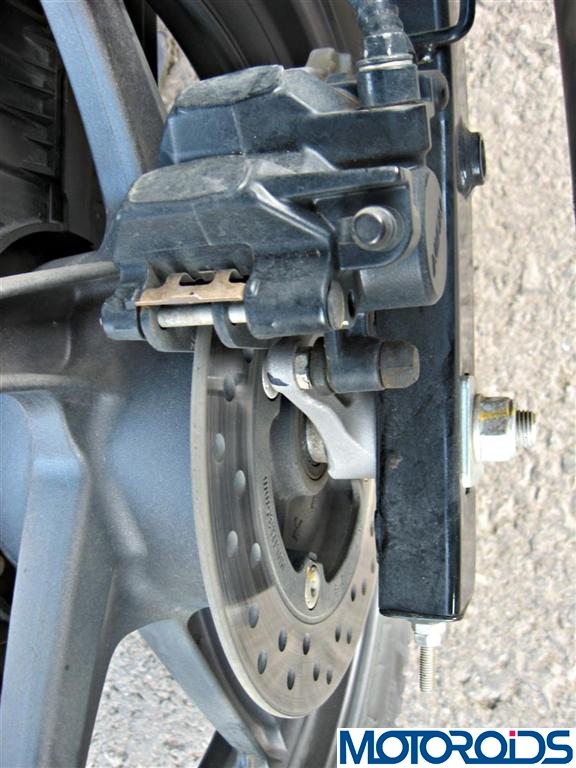 While on one hand it might be a great tool for people (new riders in particular) who have their own apprehensions on using the front brake, the CBS would work well in panicky situations. If we have to compare, the braking experience of the Trigger was very close to the ABS feel of the Honda CBR250R- yes, it’s that good. Unfortunately the Combi Braking System is available only in the top end model and you would have to shed a few thousands extra for this feature. But if the cost is to be disregarded, we’d say it’s a fabulous feature to have on the motorcycle.

NEXT PAGE FOR FUEL EFFICIENCY,  CONCLUSION AND TECH SPECS

The Honda Trigger was ridden close to 600 kms in two days and subjected to all kinds of riding conditions that included high speed bursts, constant cruising, ghat riding, stop and go traffic etc. Spending most of time under demanding and stressful conditions, the Trigger rendered a mileage of approximately 48 kpl. Such style of riding isn’t an everyday affair and we expect the numbers to improve in the hands of a more sedate rider. 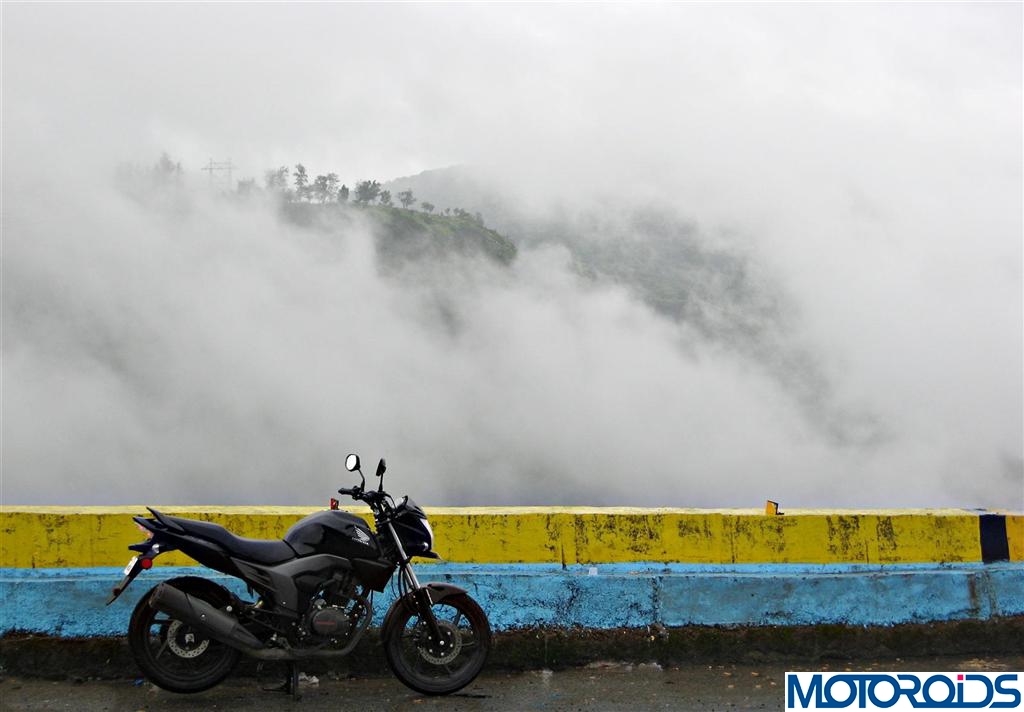 Armed with traditional Honda refinement, the Trigger is an extremely capable motorcycle further armed with fabulous handling and braking manners. The short geared nature might not earn it a tag of a mile muncher, but it makes up for a brilliant city tool for someone looking to upgrade to a premium commuter class. A comfortable seating position, a light clutch connected to a near flawless gearbox while retaining the benchmark engine refinement from its predecessors and reasonably good mileage- the Trigger is a deserving candidate hard to overlook. Available in three variants, the only stumbling block that lies in the Trigger’s path is the price (On-road Mumbai).

The pricing puts the top end variant of the Trigger into the category of performance motorcycles in India with the STD variant still being priced higher in comparison to the competition. But if you wish to look no further than a Honda and need something that would handle your routine commuting chores without fuss and an occasional weekend outing, we’d say “Go ahead, pull the Trigger”.