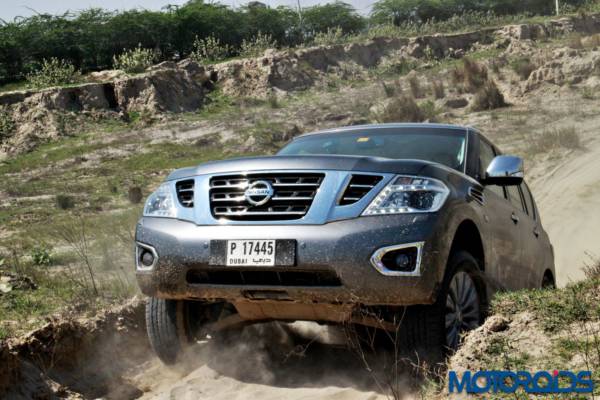 When we got an invite from Nissan for the Nissan Carnival, we were quite excited. Nissan GTR makes people of this generation go weak in their knees. Nissan GT-R, the supercar slayer makes some extremely expensive exotic machines look pretentious. So while the GT-R creates the aspiration imagery for the performance oriented boy-racer, Nissan has an equally rich portfolio of hardcore off-roaders to delight the adventure enthusiast too. Thanks to the Pathfinder, the X-trail, the Xterra and the Patrol, the Japanese carmaker is known for its prowess in mud-plugging machines.

Nissan Patrol, the flagship Nissan SUV, is one such all-terrain machine which can tread uncharted territories without compromising luxury or comfort. We got a chance to sample the big SUV at the Nissan Carnival organized some time ago around a custom made track. So here it is – our first impression of this big SUV. 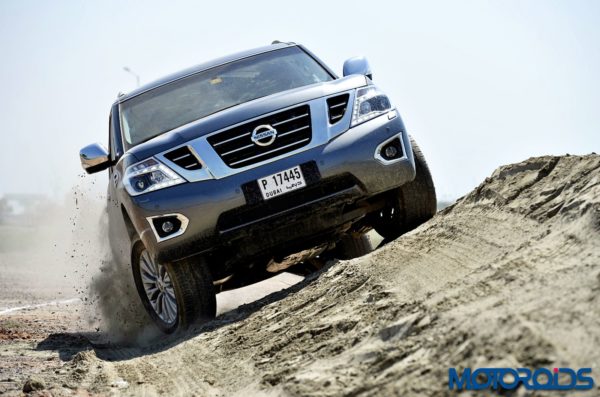 What would you call a 2.8 ton behemoth powered by an extravagant, 5.6L V8 Petrol engine these days? A Planet slayer? And that would probably not just be because of its huge engine but the fact that this beast can go anywhere and surprisingly, you will be cocooned in supreme luxury as you do it. And you realize how humongous the thing is only when you stand next to it. The car may conceal its girth well in the pictures, but get closer and the size becomes overwhelmingly evident.

There is heavy use of chrome on the car all round, from the signature Nissan Grille, to the fog lamps housings, the greenhouse lining, rub rails, fender vents, ORVMs door handles and rear license plate garnish – everything is drenched in high quality chrome. The car features soft bulges all across, there aren’t any sharp lines on the Patrol’s body, probably to exude controlled brawn – a blend of refined luxury with off-road capability.

The big windows give you an impression of a spacious, airy cabin. The dimensions, which read more than 5 meters of length, and a little less than 2 meters of height should not leave any doubt about the abundance of acreage inside. 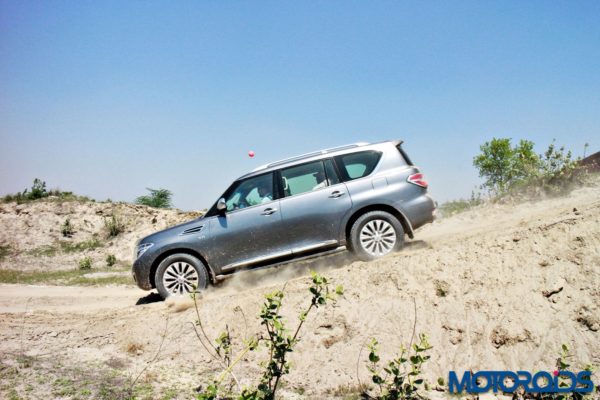 During the Nissan Carnival, the media representatives were divided into three groups and we happened to be part of the group who got to experience the Patrol first. The Y62 Patrol has so much road presence and looks so menacing that as we approached it, my heart skipped a beat as I was completely overwhelmed by the size and presence of the 2.8 ton behemoth.

As we climbed into it, we were amazed by the luxurious cabin. Something the Patrols were not initially known for. Luxury was more the domain of the British Range Rovers which ferried footballers than doing any true off-roading. But two fun facts indicated towards this change. The spec sheet on Patrol’s global website was in Arabic and our test vehicles had Dubai license plates. In these times of increasing fuel prices, it’s the sheikhs who can really afford the fuel (well, they actually own the fuel) and they like to do things in luxury.

An old friend who went down under to Australia a few years ago was into serious off-roading in his Nissan Patrol. So much so that he got the latest generation Y62 in his wedding procession from Nissan Australia and he did not like it as much as his older Patrol because of the luxury. Hard as it may be to believe, Patrols are as popular, if not more, than the Range Rovers with the off-roading enthusiasts.

But has the Patrol lost it’s extremely focused go anywhere attitude, with the added luxury and amenities? We found out as we drove the car around the challenging off-road track. 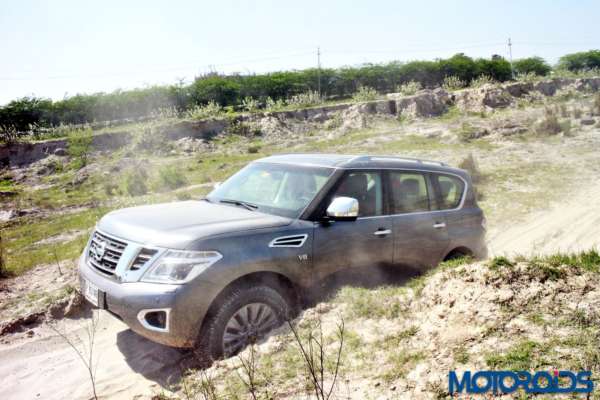 The Patrol features a body on frame chassis and comes equipped with a monstrous 5.6 liter V8 petrol engine. The engine is mated to a 7-speed automatic transmission. Slot the drive selector into D, release the brake pedal and press the throttle. The 400 bhp engine with 560 Nm of torque propels the heavy beast like a rare few would be able to with so much mass loaded on their backs. You have faster accelerating cars, but the Patrol moves ahead with a locomotive-like unstoppable feel. The engine is extremely refined and quiet as you cruise, but develops an enticing, sporty V8 burble as you push the pedal to the metal. Nissan is claiming a 0-100 km/h time of 6.6 seconds, and the way this thing moves, we don’t have any reason to doubt their claim.

The beautifully crafted, wood inlaid steering wheel feels light and helps the car to be manoeuvred around with ease. The Patrol doesn’t feel as big as it really is from behind the steering wheel. It handles smooth tarmac with as much aplomb as it does rough terrain. The car feels extremely planted with minimal body roll, giving you a reassuring, car-like feel around bends. Sure, the Patrol is no sports-car, but for its size, the behemoth is mighty impressive handling-wise. This is thanks to the car’s brilliant suspension setup, along with its unique Hydraulic Body Motion Control (HBMC) which effectively controls body movement as well as helps the car’s body level itself even when the surface beneath the wheels is not level at all. 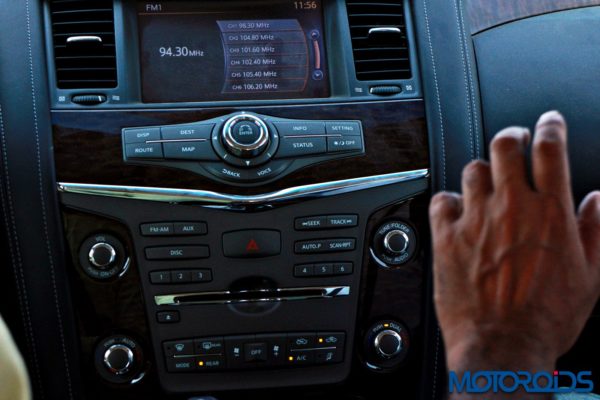 From behind the steering wheel, the high seats ensure a great all-round view and a feeling of power. You are intimidated initially to hurtle this thing around knowing its mass, but your doubts are soon laid to rest thanks to the impeccable dynamic set-up. Massive brakes, EBD, ABS and a whole army of electronic minions further help to keep matters under control.

The cabin is beautifully created with liberal use of wood, leather, chrome and other high quality materials. The centre console looks decidedly premium, feature rich and built to last. Audio quality is superb, too, thanks to a 13 speaker Bose sound system.

The middle row passengers get seven inch infotainment screens behind the front row seats. The space in the middle row seats in absolutely fabulous with great head, knee and shoulder room. Even the under thigh support is exceptional. The transmission tunnel takes up minimal space and the middle passenger in the second row should not have much trouble. The second row gets its own A/C vents and there here are many cubbyholes for bottles all around the car. 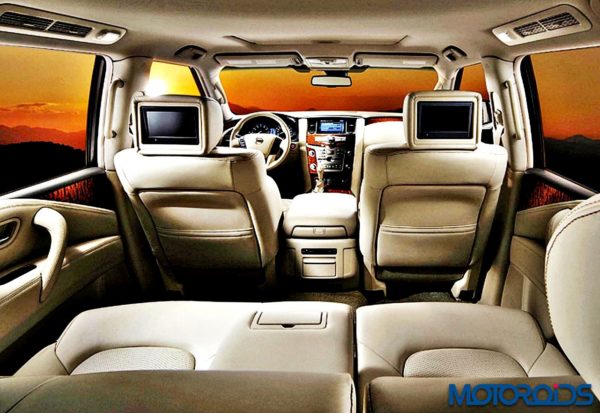 The space in the third row seats is decent for middle sized adults, however, you have to sit with your knees pointing skywards, which may not be very comfortable over long distances.

The car can be set for 4 driving modes: Road, Snow, Dirt and Rocks and each mode gets its own button in the central console. The four buttons form a circle and are surrounded by chrome selection knob for 4H and 4L. You also get buttons of hill descent control and differential lock in that set-up. Traction control can be turned on or off with a separate button. The selectable off-road modes along with Nissan’s Terrain Response System make the Patrol ready for almost any kind of terrain.

While traversing the off road course, we first went through a series of ‘potholes’. The Independent double wishbone coil sprung suspensions at four wheels made sure that we did not even mildly feel like throwing up our breakfast burrito. We did feel the atrociously designed potholes but our heads were not bobbling around like a bobble doll. Quite surely, an average SUV would have made us smash our head with the rood, and a sedan would have lost its wheels over the tortuous course. 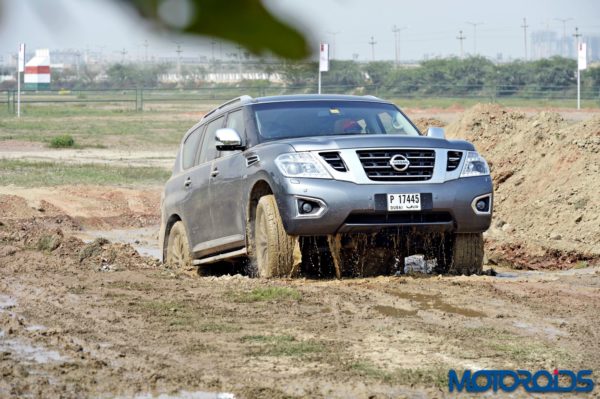 We then drove it sideways on an incline. While the visuals from the window did look scary, and we did for a moment feel that the car would topple over, as we progressed, we realized the Patrol wasn’t even close to the limit of its capabilities. You have to keep the steering straight when on the incline and steer down the slope as your come out. Piece of cake for the beast!

Then came the articulation course. It was not a true articulation course as a less gifted Nissan Terrano was also being taken through the same course. Anyway, as you can see in the image, the suspension system works independently and thanks to Nissan’s Hydraulic Body Motion Control (HBMC) technology at the front and rear, the cabin remains unaffected despite the highly uneven surface.

This system also kept the body roll to a minimum as the instructor drove hard around corners while going to the course. Body roll and inability to brake with panache are two reasons I am not a big fan of SUV’s on road. However, this is not true for the Patrol. We braked hard on a gravel strewn mud road going 80-90 km/h and the car was rock steady. Throttle a bit through the series of rumble strips, the shake in the cabin is not much, thanks to HBMC. Unfortunately, I could not power through the muddy section as people were standing close to the track, clicking pictures and I did not want to splash their cameras but have no doubt that it will easily sail through the muddy sections without breaking a sweat. 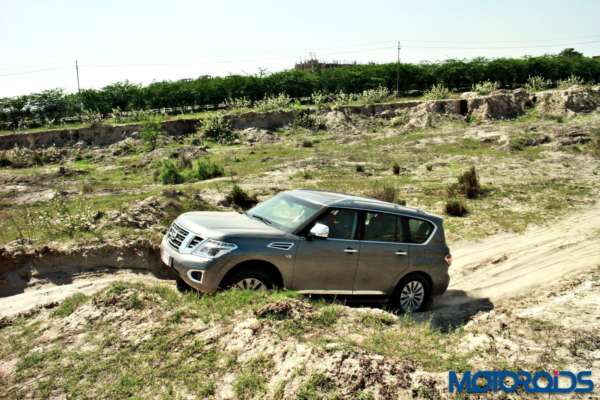 At the main driving course, we basically tested the climbing antics of the beast. It can go up steep slopes and putting it in ‘sand’ mode means even having sand on the tracks would not prevent it from going to top of that hill. Through the entire drive experience, the car did the entire job, and literally any driver can go off-roading in this beast.

Driving the Nissan Patrol was a breeze. However, since it is mostly the electronics which do the work out there, there is something missing. Off-Roading is just not about clearing the hill or going through that tough section as you sip on RedBull. Hardcore off-road enthusiast like to get stuck, get out of the car, understand the course and then drive through. Nissan has clearly moved from catering to the hardcore enthusiast to a larger audience base of people who like luxury and comfort most of the time but like some off road fun as well. The Car is perfect for it. However, with a thirsty V8 Petrol, it might not get too many buyers. 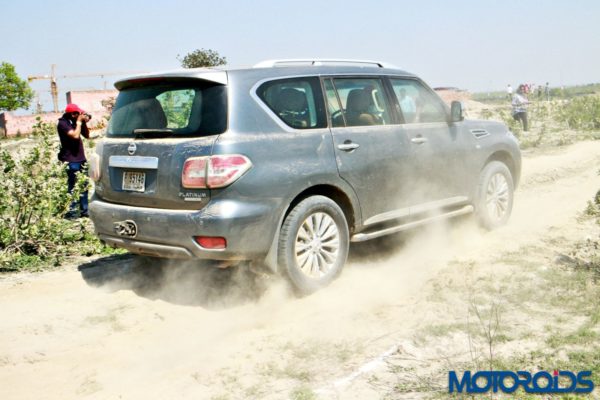 Nissan is planning to bring the Patrol to India, and the lack of a diesel engine may be its biggest undoing. However, at an expected price of nigh Rs 1 crore, the man who buys it wouldn’t probably care much about the fuel bills.

It’s an exceptional machine, the Patrol. We love it to the core. But would there be enough connoisseurs to dish out Rs 1 crore for it? We are not sure. Would you? 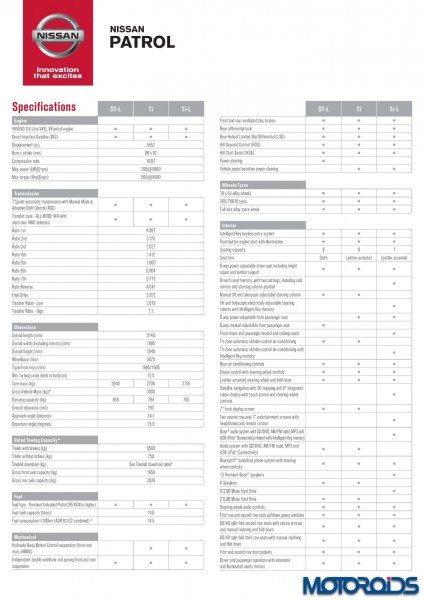 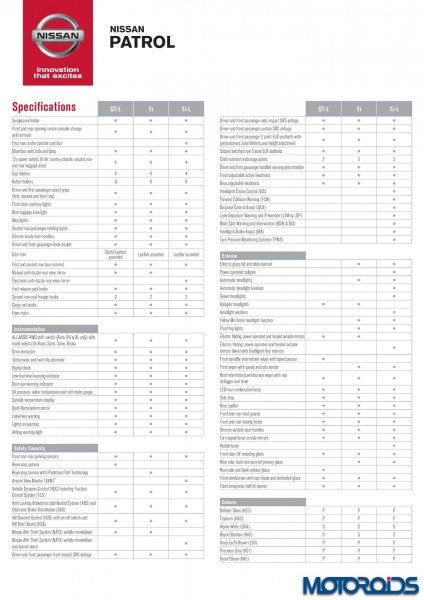