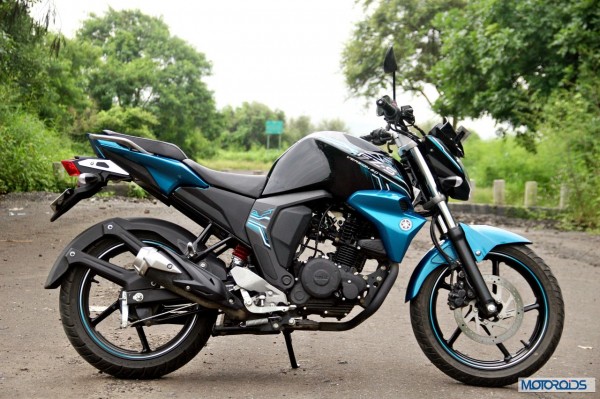 Lord of the streets, they said. In its time, the Yamaha FZ 16 would safely walk away with that caption. It taught others of its ilk a thing or two about street credo, with its FZ1 derived, muscular bodywork devoid of unnecessary stickers and that meaty, low profile rear rubber that was the talk of the town for ages to come. It rode and handled brilliantly too, except for the slightly lackluster performance. The FZ S followed later, and added a bunch of stickers and a subtle front visor but lost the original’s character. Times have gone by and now it’s time for am all new version – Version 2.0 in Yamaha speak. There’s also a prominent FI suffix, indicating its fuel injection tech. 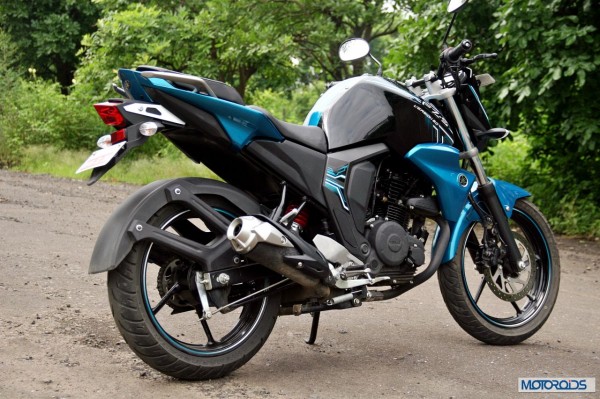 The new 2014 Yamaha FZ FI version 2.0 (the nomenclature is quite a mouthful) looks not too different from the last FZ, which is never a bad thing. Actually the original’s style was close to perfection, so this one looks like the old one jeweled up with a sense of futurism that doesn’t really tug our heart strings that hard. The perfectly sculpted tank is retained, but other panels have undergone considerable surgery. 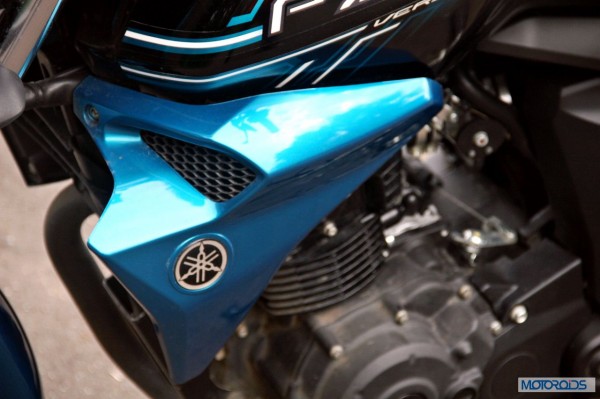 A pair of sharply styled tank extensions partly shrouds the engine. The rear panels are all-new as well, and are equally sharp and contemporary. The tail piece is new, but has a familiar feel. The floating tail lamp is still around, but this time around it nestles inside a cool metal and black extension. We wish it were an LED outfitted job though. The indicators have grown and the head lamp has been mildly re-tweaked with an edgy flavor. The small visor stays on to look cool. The seat is new, and is now a two step, split affair- the pillion portion can be completely removed to access a small storage space beneath.  A pair of new grab rails joins the party as well. A dual tone paint job and some new graphics paint the complete picture. 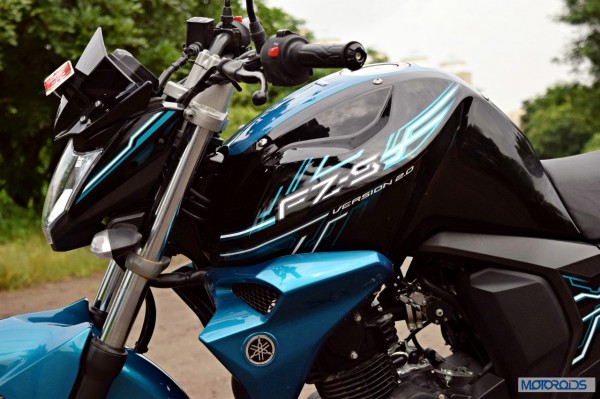 The old, stubby, yet funky exhaust has been done away with and in comes an all- new one which is equally short but is more rotund. It has also been smeared with complicated surfacing that we’re not too fond of. There’s also a new mud guard that looks pretty accomplished because it safely covers more than half the rear tire- some would prefer otherwise. 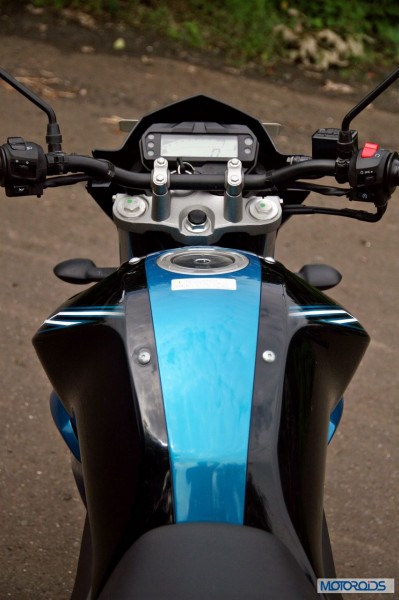 While the earlier instrumentation looked pretty hip for its time, this one doesn’t disappoint either. It’s a rectangular console with excellent readability in the sun that compactly integrates all the things that you need to know, as well as all the tell-tale lights. But the lack of a clock is one glaring omission. The switchgear quality is average, but the palm grips are superb and form excellent touch points – like on the old FZ. 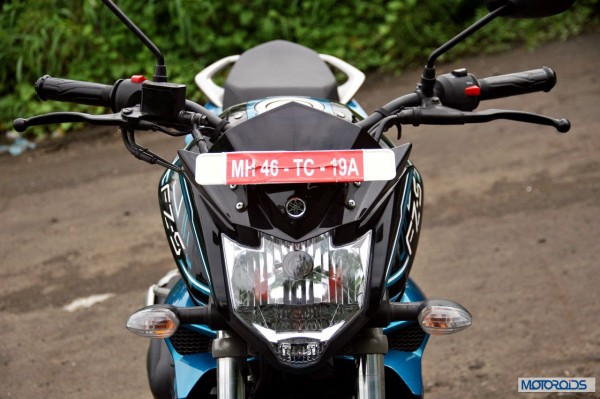 The seating position is relatively crouched forward, yet reasonably upright for a commuter and manages to convey the broad footprint of the bike through the wide handlebars. The rider foot pegs are slightly rear set, while the pillion seat manages to be more comfortable than the outgoing one. 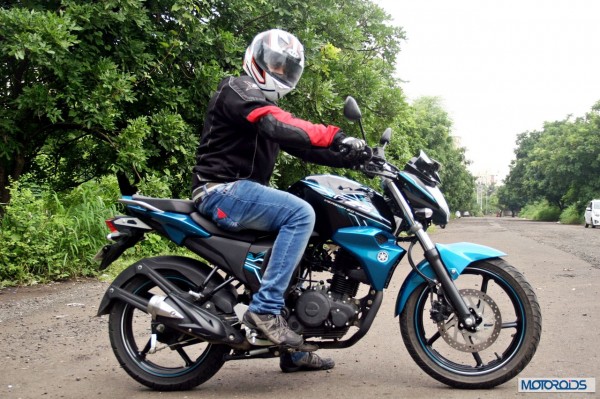 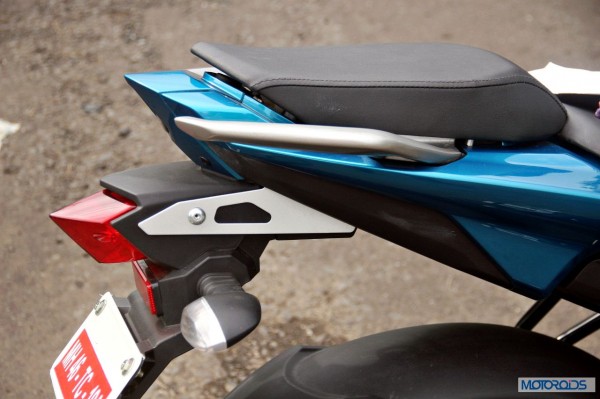 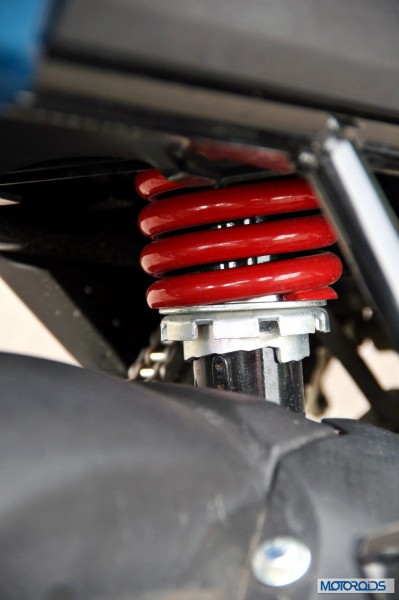 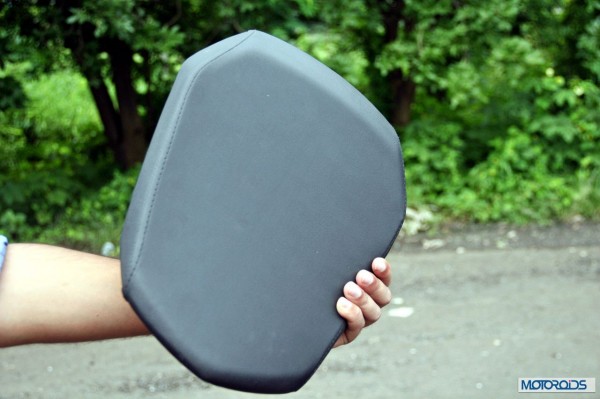 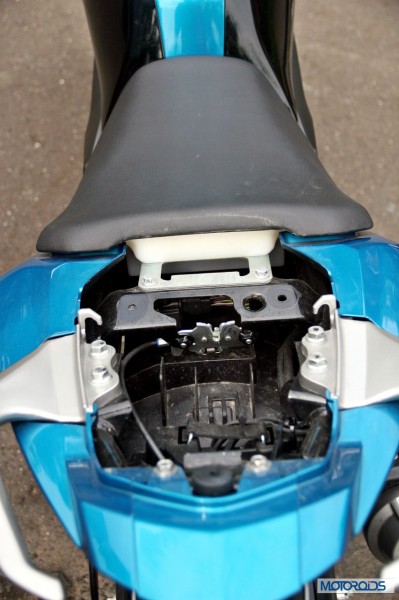 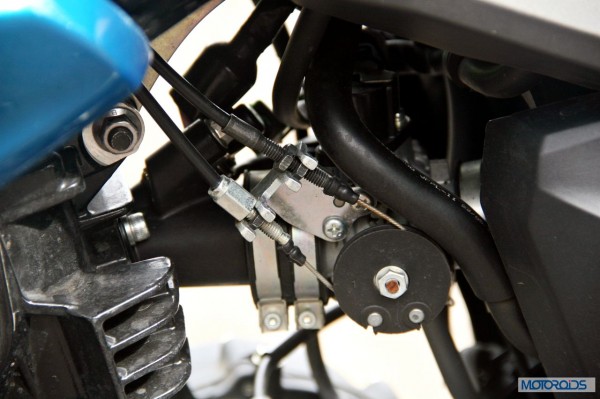 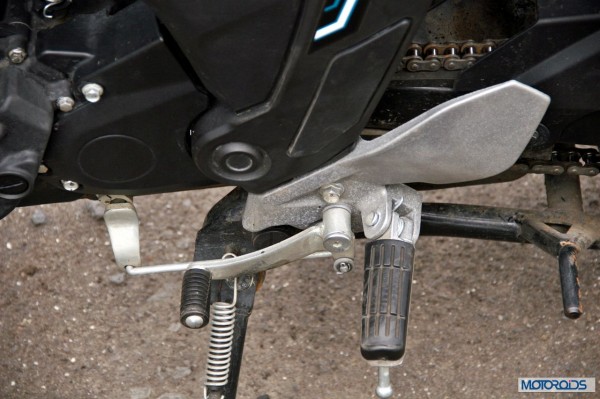 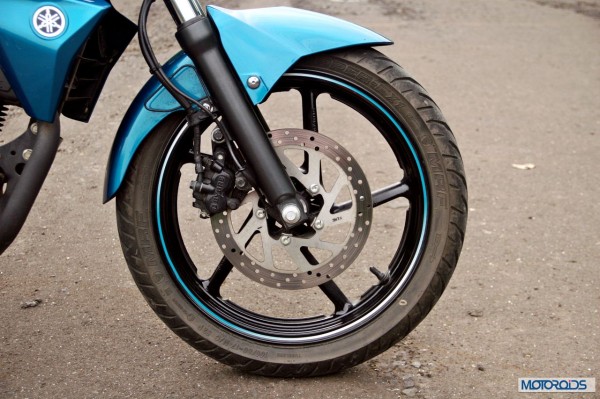 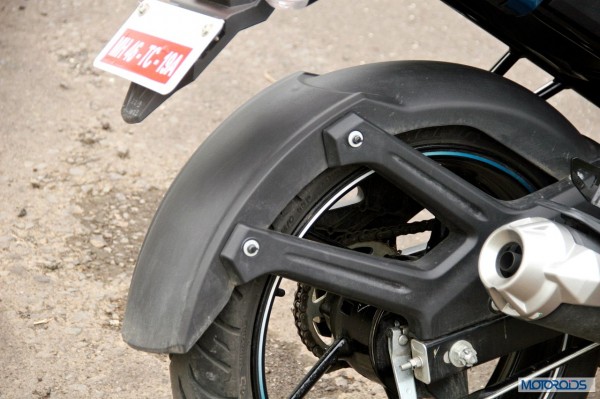 Rear mudguard not to everyone’s tastes 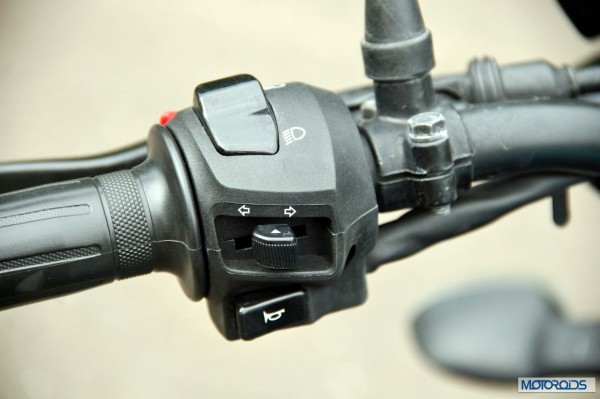 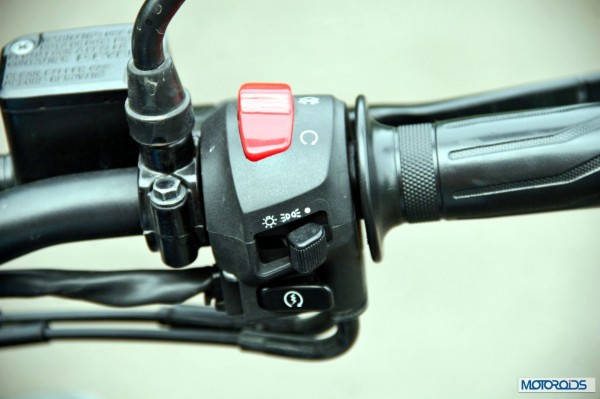 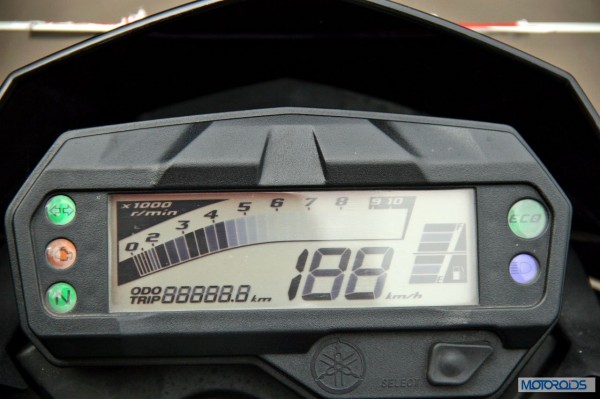 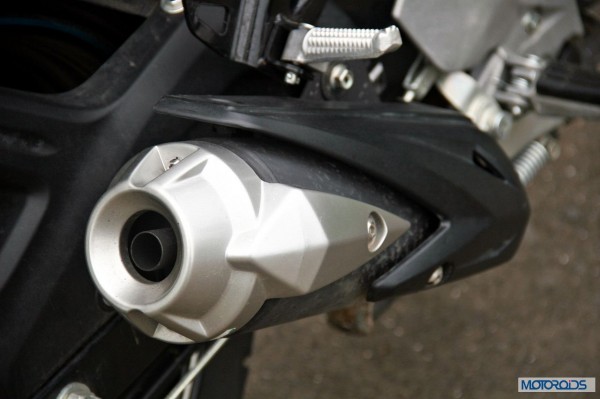 >>Next page for Engine, Performance, Ride, Handling and Dynamics>>

The new FZ-S gets a thoroughly revised version of the old motor- and now comes with fuel injection. However at 149cc, it’s 4 cee cees down from the outgoing FZ, and also results in the slightly lower overall power 13.1PS at 8,000rpm and the slightly lower overall torque 12.8Nm at 6,000rpm. The new engine is 1.5 Kg lighter, thanks to lighter moving parts like the lightened crankshaft and pistons. Yamaha have also reworked the shape of the combustion chamber, retuned the intake port, and altered the placement of the two valves for better overall combustion – all of this and much more come under the new Blue Core technology that are set guidelines for overall engine & frame lightness which collectively aim for improved performance and economy. 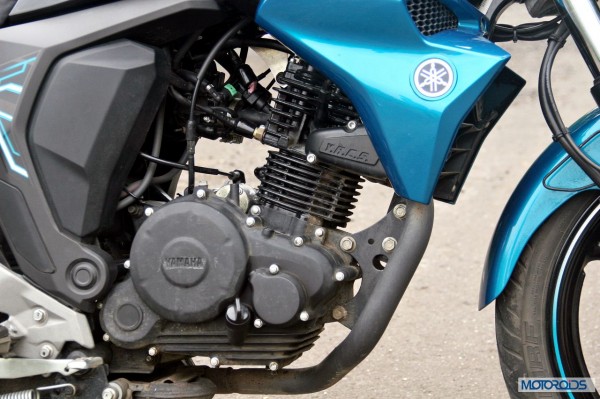 The bike immediately feels a lot more refined all throughout the rev range, what with smoother and lighter components acting within the engine. Power isn’t a rush to the head, but is delivered in a more linear manner- a marked improvement over the last FZ. Mid-range is the most potent bit of the new FZ’s performance platter, with one running on a liner surge of power. After 90 kmph, she loses a fair bit of steam, but continues to trundle it way to an indicated 115kmph. 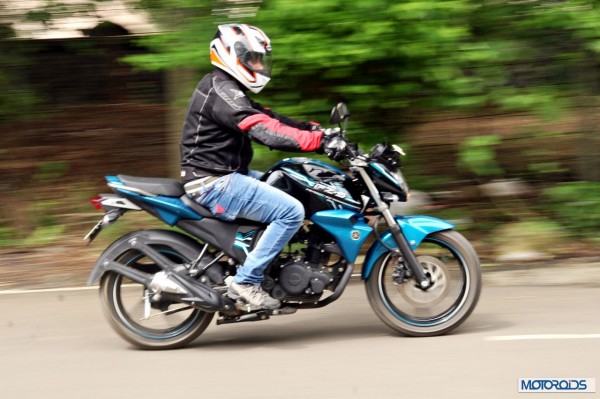 Low end grunt isn’t too bad either, with the new FZ reaching 60kmph from rest in less than 6 seconds. One more highlight has to be the light clutch action which makes piloting it in stop-go traffic a breeze. The gearbox is a slick shifting, five speed job with similar gear ratios and the only variation being the change in the rear sprocket which is a 41-tooth cog now – compared to 40 on the last one. 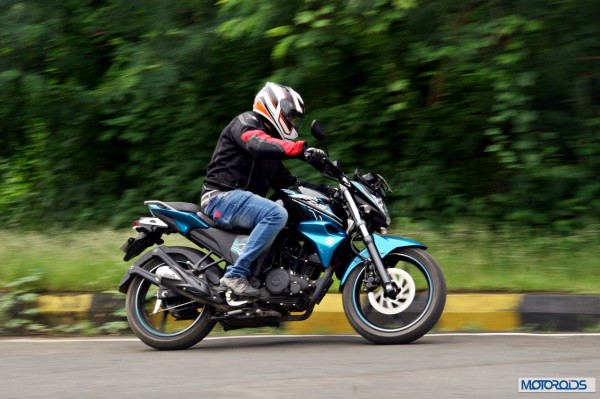 Back to the old FZ again, the dynamics and handling were fantastic for its days. The new one doesn’t disappoint either. With the mono shock and the Diamond frame chassis working in tandem with the fat 140/60-R17M/C spec rear rubber at the back, the bike feels amazingly planted and confidence inspiring both in the corners as well as in a straight line – gives that familiar FZ feel again. It’s tough to get oneself in a tough spot with this bike, unless you’re the really adventurous sort. Actually, the sorted dynamics outshine the performance any given time, with the bike being rock stable even on sustained triple digit speed runs. 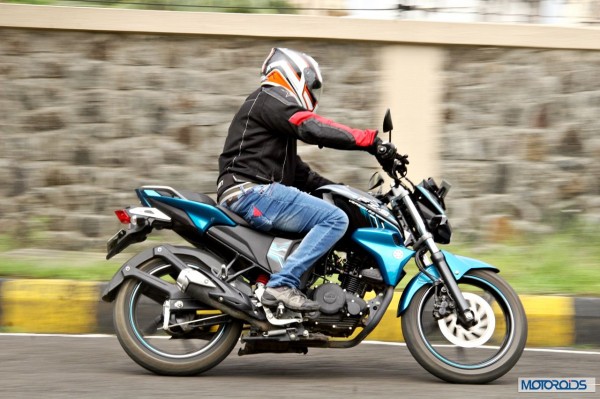 The ride is slightly on the stiffer side, with the rear mono shock adjustable though, this issue can be easily resolved. Yamaha says the new engine delivers 14 per cent better economy than the old FZ. Yamaha also claim a 29 per cent cut in CO2 emissions, 33 per cent lower HC+NOx and 20 per cent lower NOx from the new engine. 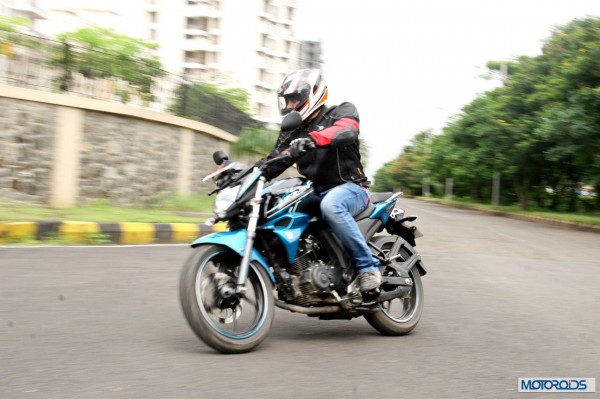 >> Next Page for Verdict and Image Gallery>>

The new 2014 Yamaha FZ-S FI Version 2.0 ticks most of the right boxes. It’s got the style, class leading dynamics and decent performance. The stiff ride may be deterring to some, but it doesn’t rob much away from the riding experience. The butch looks alone should win the hearts of many, and the sorted dynamics should sway the attention of much keener riders. 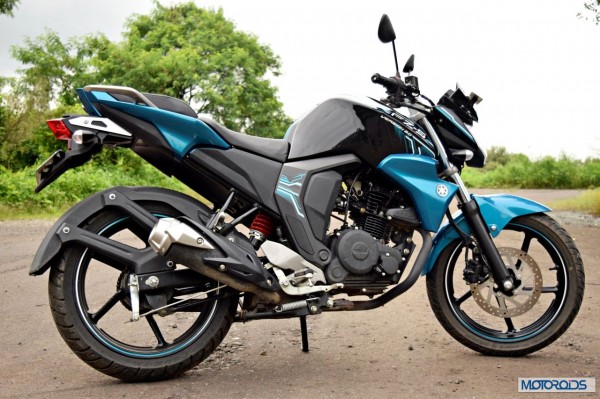 As a mildly performance oriented, premium commuter, it does make a very strong cased for itself. Fuel efficiency is not too bad either. The biggest letdown in our opinion has to be the price- at Rs. 82,660, ex-Mumbai, the FZ-S V 2 strikes across a little too less for the money. The hike in price can be mostly blamed on the fuel injection system, which has also taken the refinement levels a notch higher. So if you aren’t too disconcerted by the price, the new FZ is a quality motorcycle and follows the legacy of its impactful forebear rather well. So if a big, bold, muscular motorcycle with dependable mechanicals and decent performance is something you are looking for, the new FZ should present itself as a solid contender. Do have a test ride before you buy in the segment.

Head to the gallery below for a detailed gallery