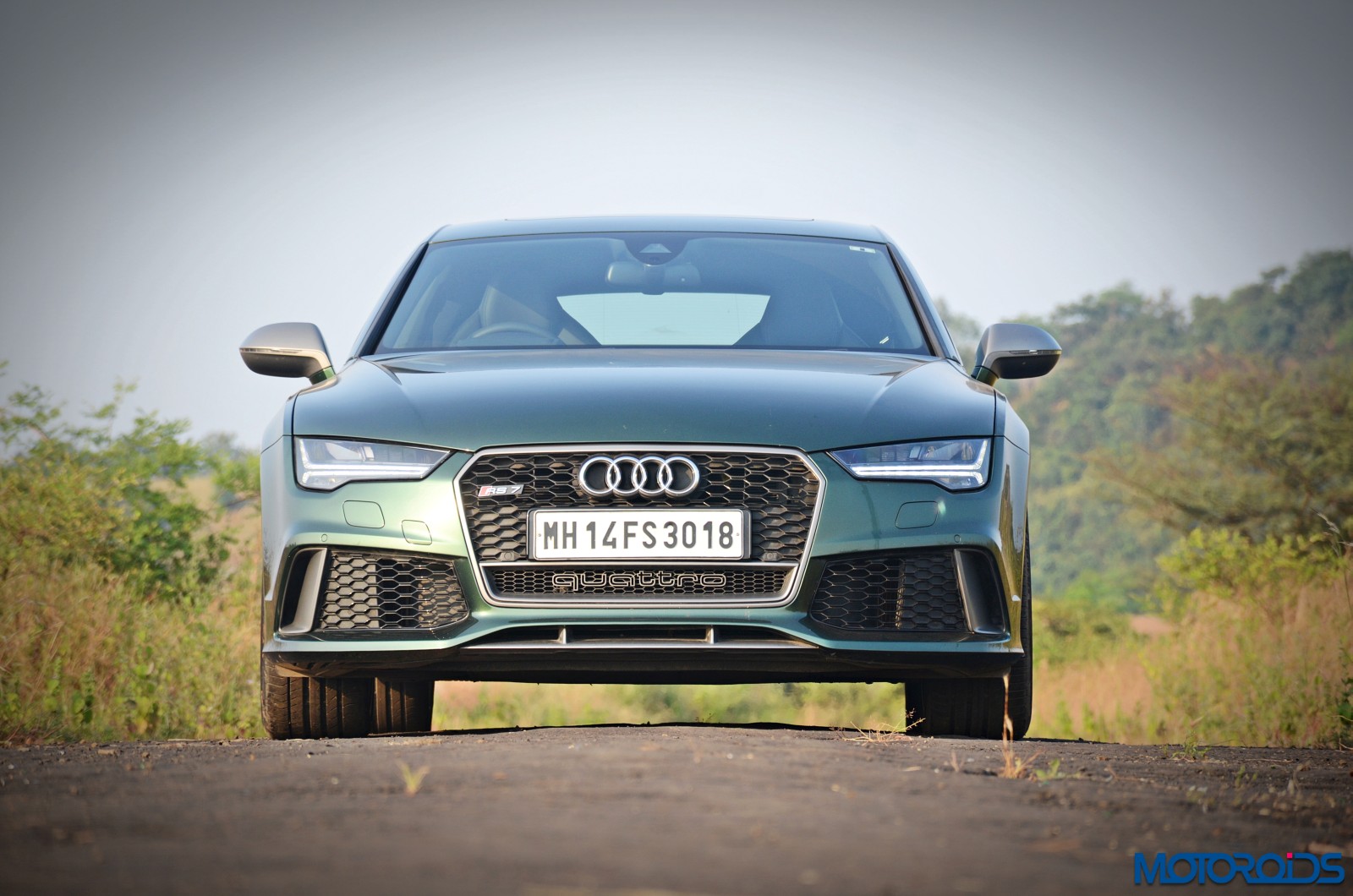 We have driven the Audi RS7 in its previous avatar, and we were astonished by its mind numbingly fast character. “It’s fast. Incredibly, monumentally, remarkably, unforgettably fast”, we concluded in our review – so we strongly recommend you read our previous, very passionately written piece about the car before moving any further, for we will talk primarily about the changes the ‘Performance’ version of the car has received in this review.

The Audi RS7 Performance, as this new version is called, is more powerful, and more stupefying than its forebear in more than one way. Let’s see what wonders this explosive four door extremity packs under its long bonnet. 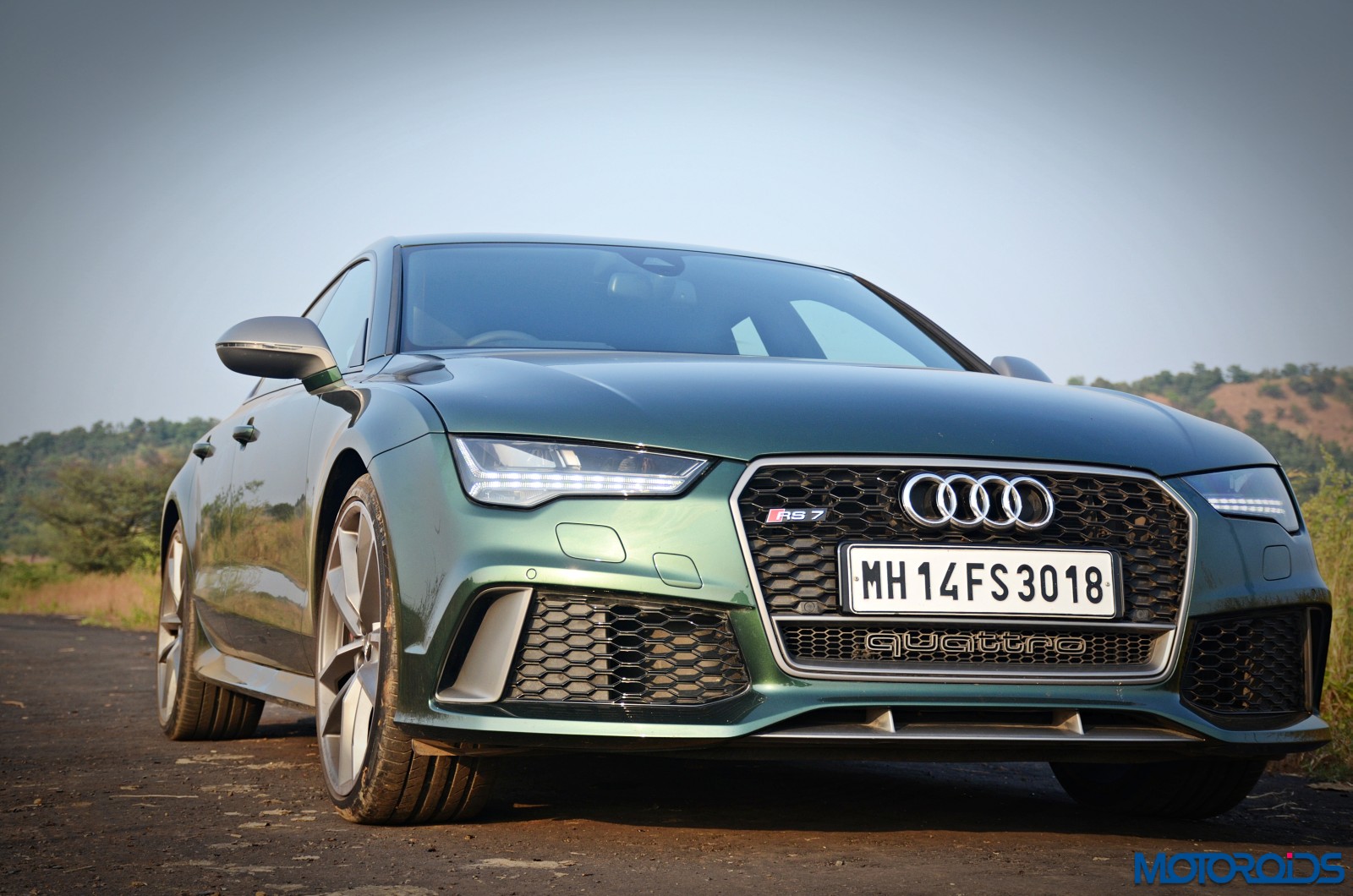 So what does that ‘Performance’ tag entail?

It entails more of what the word means in every perceptible way. The performance edition gets a whopping 45hp more from the 4.0-litre V8 biturbo, making the output figures breach the manic 600hp mark. Peak power is now rated at a mental 605hp and is available between 6100 and 6800 rpm. The peak engine speed has been increased by 200 rpm to help achieve that bump up. Peak torque, though, remains same as before at 700NM. However, the performance edition gets an Overboost function that bumps up the torque output momentarily up to 750 Nm between 2,500 and 5,500 rpm. 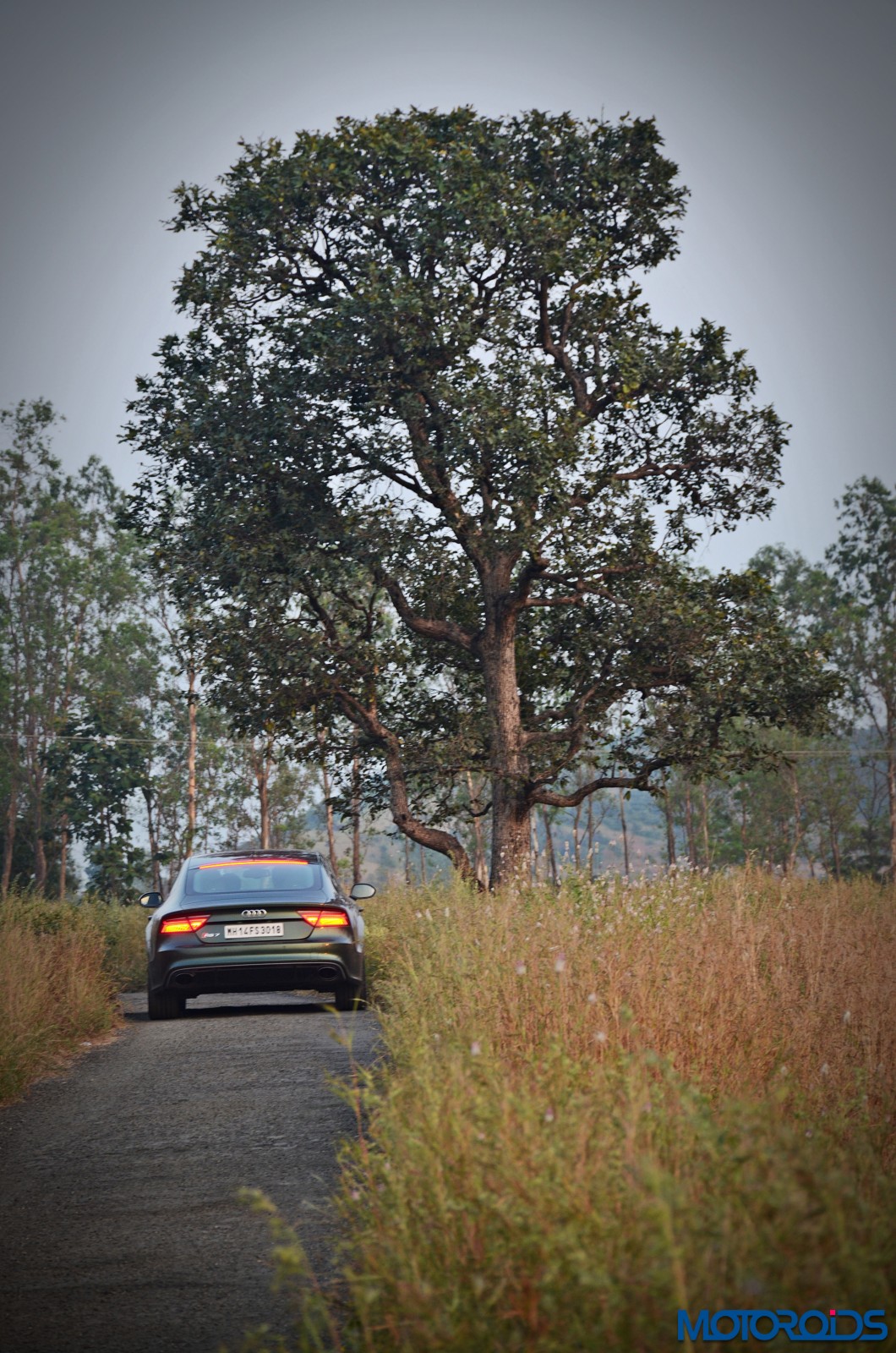 The RS7 Performance continues to be the most powerful production Audi, one of the fastest four door sedans (well fastback), and as always, the fastest car you could drive ‘fast’ in the real world. It’s just that this time, it’s even faster than how fast it was before.

And not only is it as fast as before, it’s as intelligent as before too, with its cylinder on demand (COD) tech which deactivates four cylinders when you’re cruising to deliver better efficiency. Audi claims an efficiency of more than 10kmpl. In the real world, though, if you get anything above 6kmpl, you would either be a saint or an oaf.

How much of that extra output translates into real world performance?

Oh well, the RS7 is more monstrous in its ways than ever, and you could feel it without much effort. To quote the numbers, the 0-100 km/h sprint is now 0.2 seconds quicker at 3.7 seconds. The RS7 has always been a staggeringly fast car, which Audi has managed to make even quicker and faster, and you could feel every bit of it, if you have some experience with such cars. 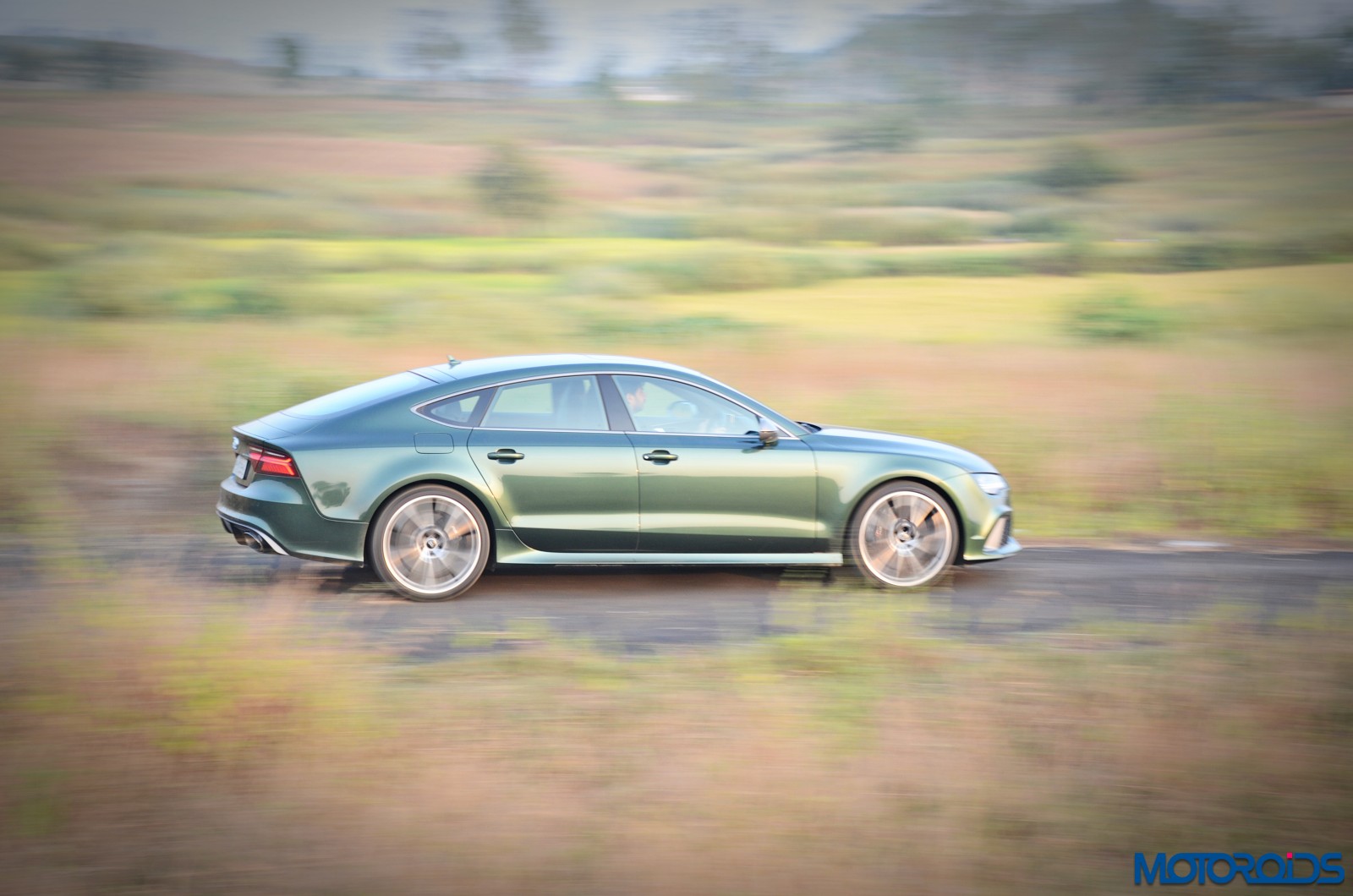 Also, what’s notable is that over and above the Performance package, you can unshackle the rather lousy 250 km/h speed limit and increase it to 280 or 305 km/h by opting in for the Dynamic or Dynamic Plus package respectively.

How do you tell the RS7 Performance from a distance?

As it is, the RS7 looks distinctive enough, and is like nothing else on the road. However, to make the Performance version stand apart Audi has added some exclusive bits to the exterior. The bumpers shout performance with their winged, flared bits, special matte titanium inlets up front and diffusers at the back.

Up front, the glossy black honeycomb mesh grille, which is exclusive to the RS line, is the first giveaway. If you don’t have an eye for detail, though, you have the RS exclusive Quattro logo inscribed on the central air inlet. 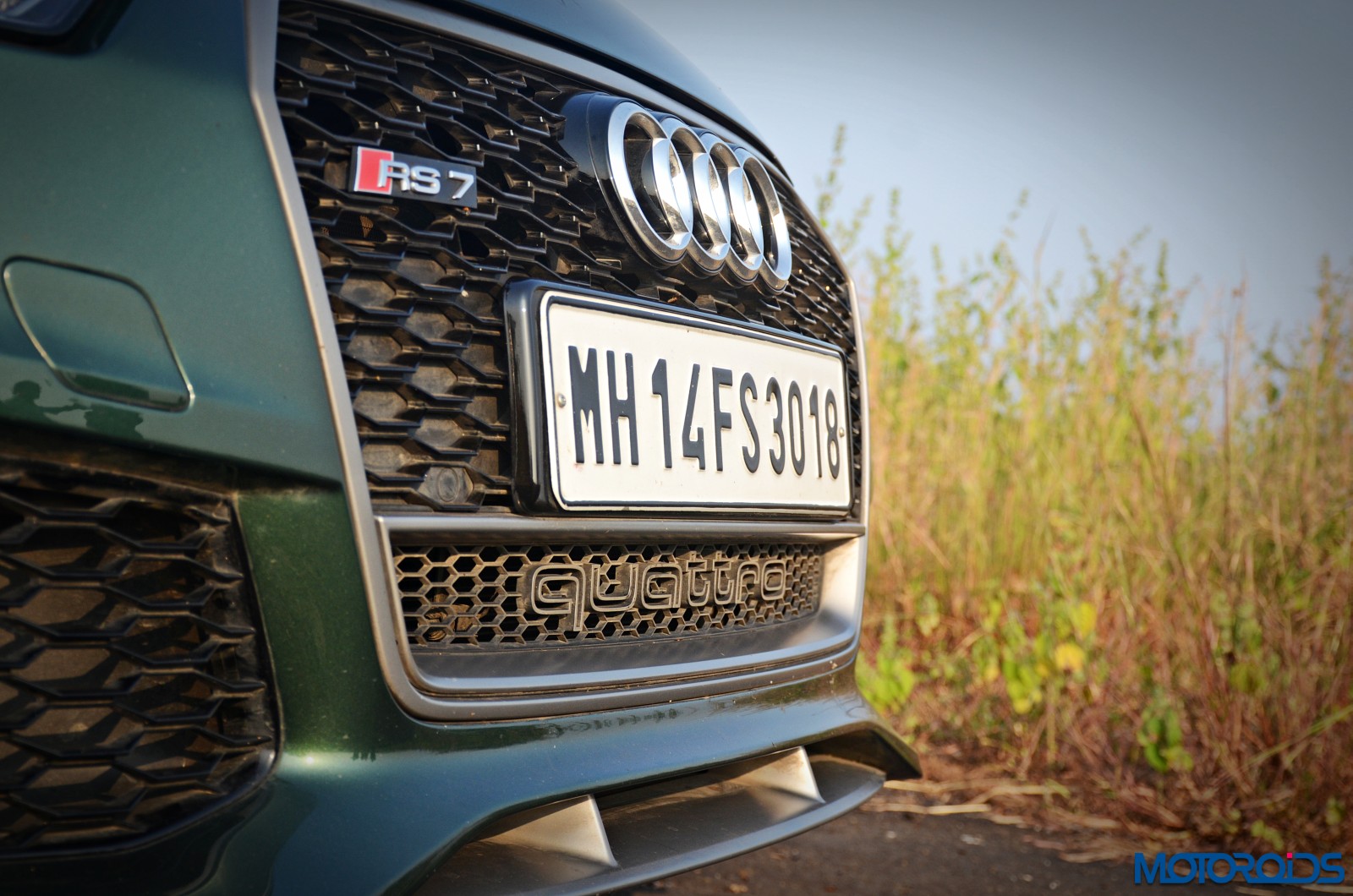 Over and above the standard styling, customers can also order the RS7 in two optional styling packages – matt aluminum and carbon. The matt titanium front inlets we mentioned earlier are a part of an exclusive RS7 package. Audi Matrix LED headlamps dynamically alter the high beam on a real time basis to prevent the oncoming drivers from getting dazzled.

In addition to the existing colors New Audi RS 7 Performance will also have an exclusive color- Ascari Blue. The interior design for the tail lights has also been re-styled. 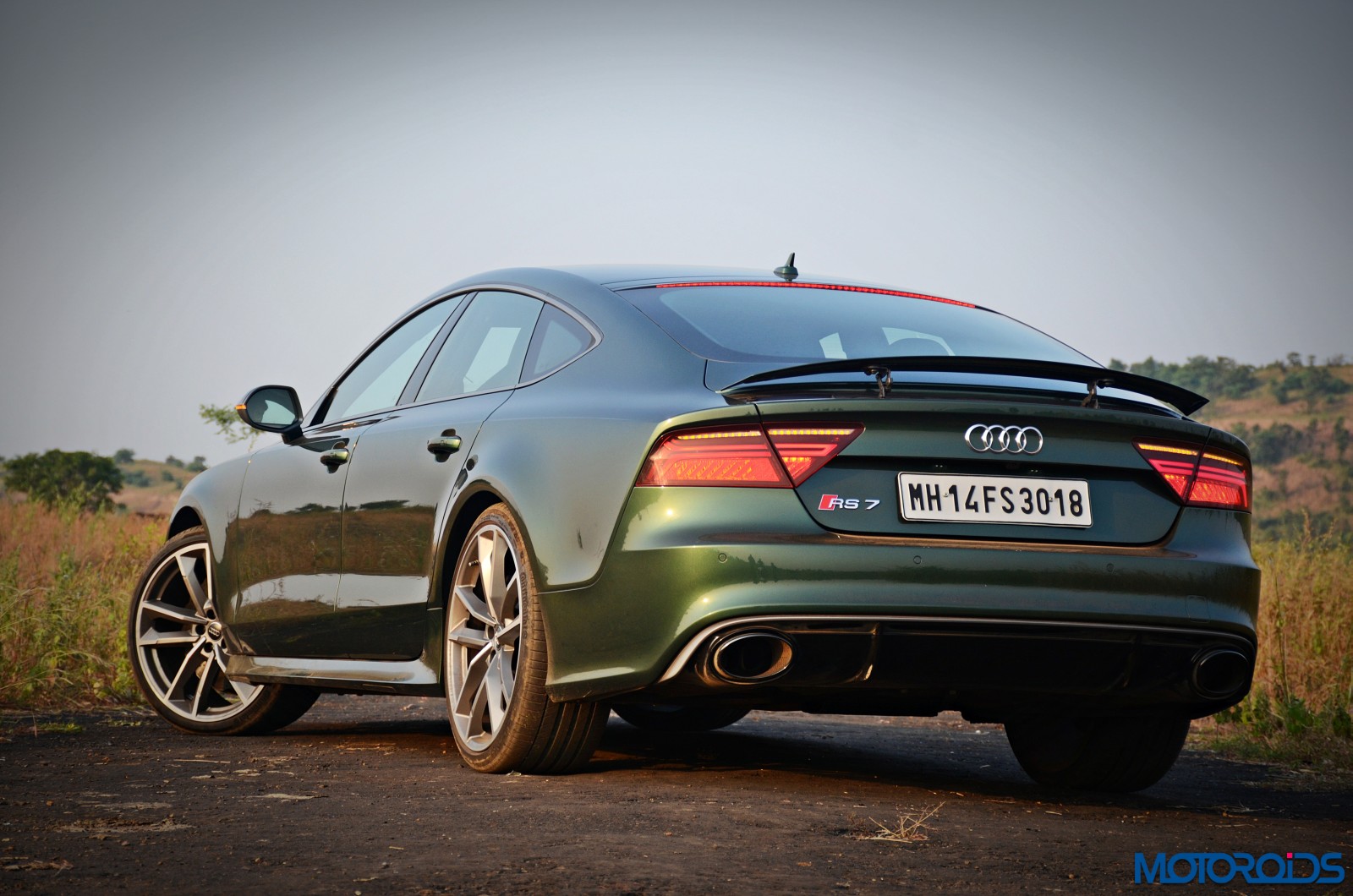 The RS 7 Performance comes standard with 20-inch forged aluminium wheels in seven twin-spoke design, though it can also be had optionally in three different 21-inch wheel designs.

Any new tricks inside the cabin too?

Well, most of the stuff inside is same as before – the sporty dimpled steering wheel, the carbon fibre lashings, the super comfy seats and the overall dash layout and trim, everything is familiar. We miss the suede leather adorning the seats, though, which has now been replaced with Valcona leather, available in either black, or Lunar Silver as standard. 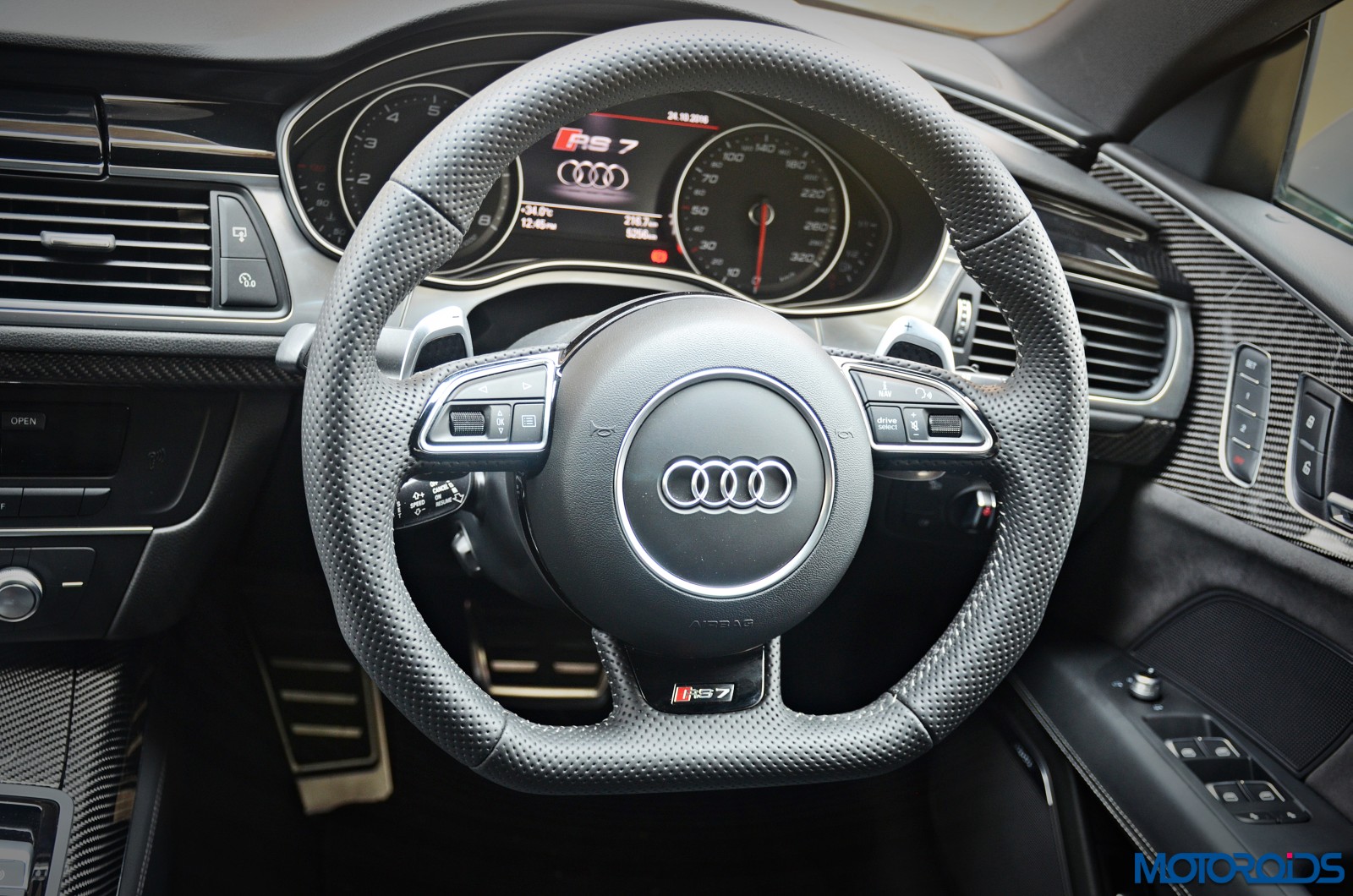 Small changes have been made to the instrument cluster, air outlet controls, shift paddles and the quattro emblem. The retractable MMI infotainment system is now powered by an Nvidia graphics processor.

The big change inside the cabin, though, is the introduction of a mode selector button on the steering wheel itself, which allows you to a driving mode, for example Comfort or Dynamic with the push of a button, without having to take your eyes off the road.

Goodies like four-zone automatic air conditioning, MMI navigation plus with touchpad control (MMI touch), Heads-up display, Bose surround system, independent Sports Air Suspension which allows you to raise or lower the body of the car by 20mm and RS Sports exhaust system are all standard. 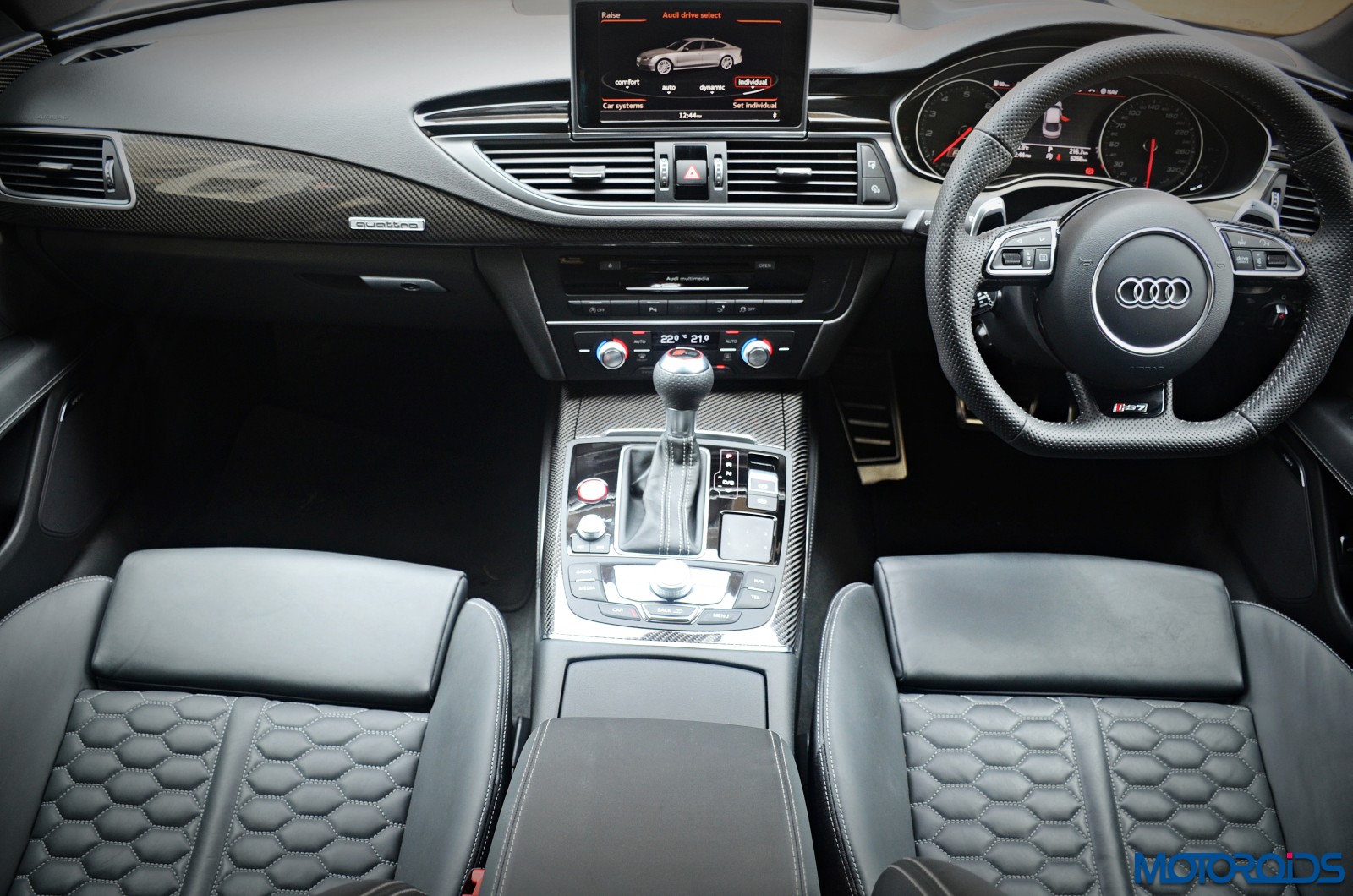 You can opt for more expensive Bang & Olufsen sound system along with a whole bunch of other customizations from Audi Exclusive, if you so wish.

Tell us about the driving experience

Oh, it’s absolutely overwhelming. There are many cars which can go fast – they have the numbers and specs and the hardware to clock some really fast numbers. As our experience as auto journalists tells us, however, a rare few of these cars can actually be driven very fast in the Indian road conditions, for obvious reasons. You’ll either break something or subconsciously feel guilty for punishing the hardware if you try driving them closer to the limit on our roads. 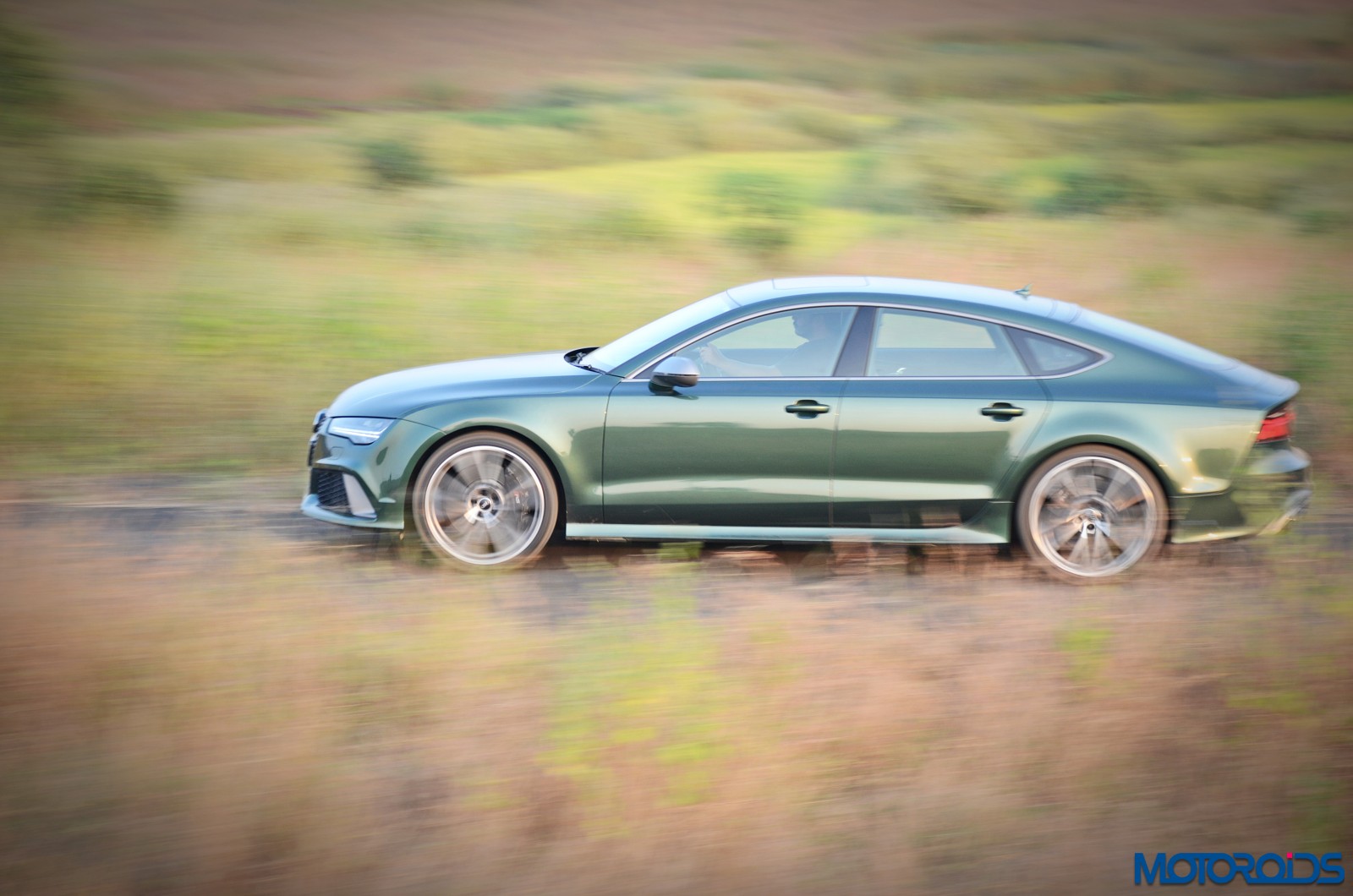 The RS7, as an exception, is a stupefying piece of hardware which can actually be driven manically fast in India, and without any inhibition. The suspension is pretty absorbent, the cabin is well insulated and the car is so diligently over-engineered that it feels solid as a tank even at speeds where some other cars are showing the signs of taking off.

The grip from the Quattro AWD, along with that electrifying throttle response and the annihilating power that ensures makes this Audi a peerless experience to drive, even for the most experienced amongst us. It’s properly thrilling in the way it shoots at the horizon, and yet, it has a monk-like, tranquil, forgiving demeanour which encourages you to push it to the limit without worrying about things like losing a limb, or dying. 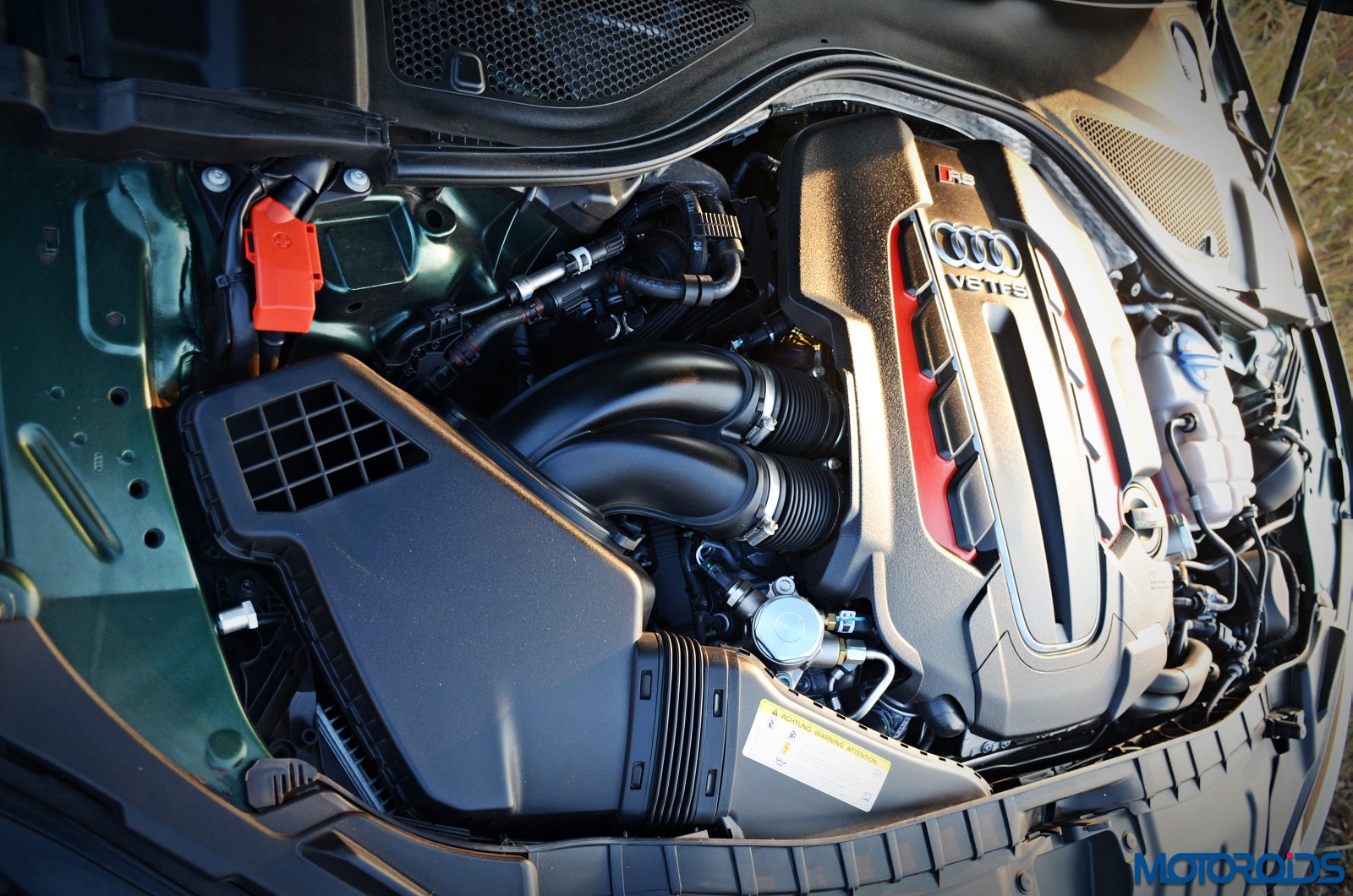 We fell in love with the RS7 we drove it last, and we fell in love a bit more this time. The one thing the RS7 on test with us this time missed, though, was the optional Sports Differential. The RS7 as it is has the ability to dynamically increase or reduce drive to the front and rear axles. The Sports Differential adds another trick with the ability to juggle power between the rear wheels. The RS7 Performance amazed us with its grip and composure around the bends of the fabled Kasara Ghat, but the memories we have of the RS7 we hurtled around the switchbacks of Lavasa inspires us to suggest that whoever is going for this expensive monument on wheels should absolutely have it fitted out with the optional Sports Differential. No matter how much it costs.

Who should buy it?

It’s a monumental machine, the RS7, with or without the Performance tag. We drove it with five aboard and at full chat for a rather long period of time, just to see how it felt, and the RS7 just went on about its business, as though it didn’t care. That says a lot about the car’s practicality, comfort, and poise even with maximum payload. 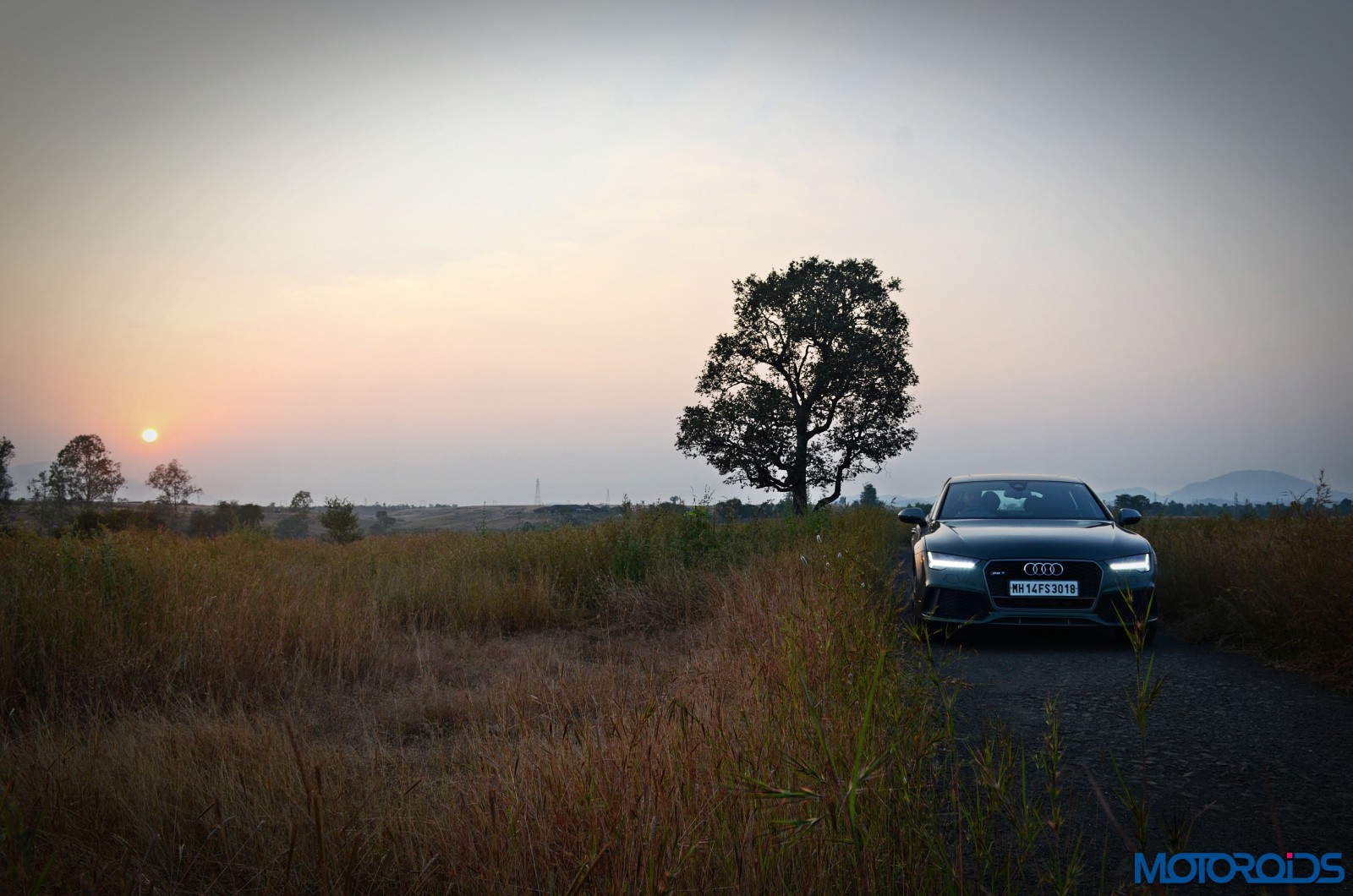 So if you are someone who just wants to go fast, really fast, in the real world irrespective of a hundred other variables, we simply cannot think of an alternative for the beauty right here. It’s a peerless machine which doesn’t just promise, it delivers.