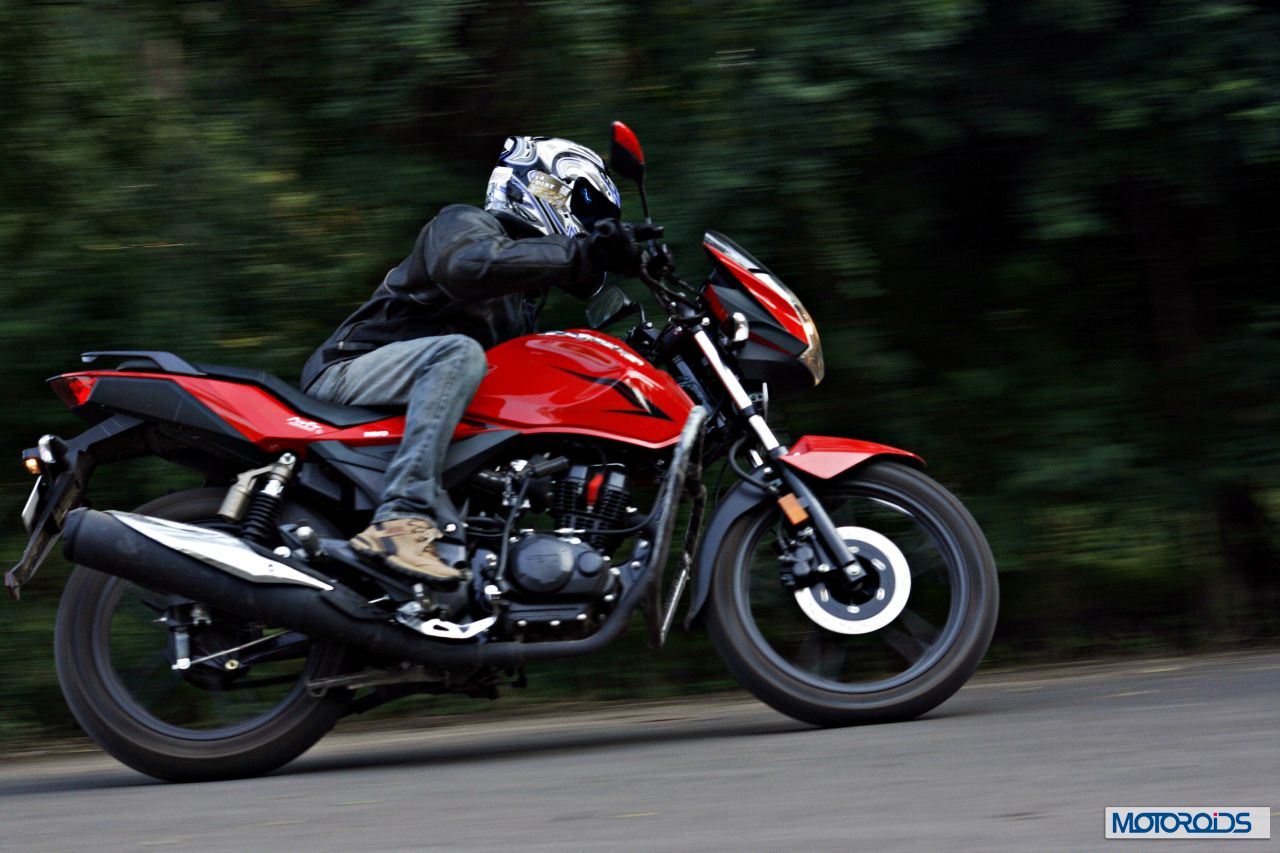 Been to a musical concert or stand-up comedy show lately? Well, even if you haven’t been, surely you must’ve noticed how they bring out the lightweights first, then bring out the big guns later in the night? If you bring out the main attractions first, then it becomes harder to follow up on that. The expectations to top the predecessor is always there, not just in show business but also in most aspects of life.

Like say, you create a motorcycle that comes with no baggage, no expectations, an unknown entity, if you will. Give it a name like, oh, I dunno, “CBZ.” And also say, out of nowhere, this bike awakens a new wave of performance enthusiasts in a market that hitherto used motorcycles strictly for commuting. 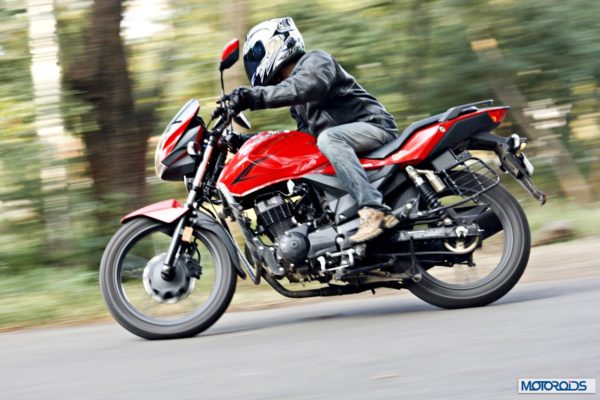 Now, when the time comes to replace this now-beloved street legend, as it eventually will, we have a problem. While the original came with no baggage at all, its popularity now means that its successor would have to not just emulate, but surpass it too. So what to do? Go back to the drawing boards, wipe the slate clean, and come up with something entirely new? Or improve upon the best bits, tinker with the not so good, give it a good lick of paint, and call it a day?

What will the case be with this, the 2014 Hero Xtreme, now that it has finally shed the CBZ name? 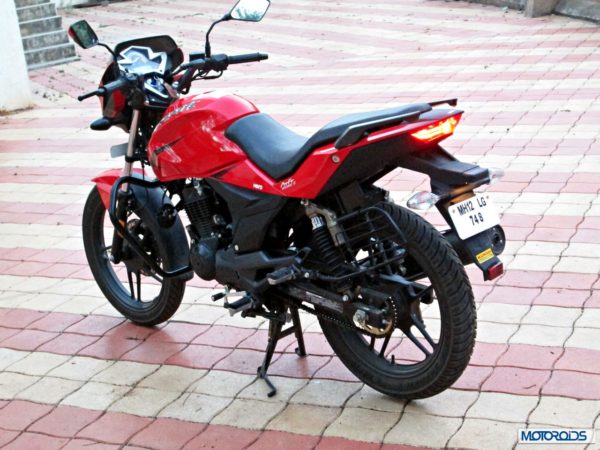 A capable bike the old Xtreme was for sure, but its styling elicited differing opinions. The new Xtreme harks back two generations to the design of the original CBZ Xtreme, discarding the angular air scoops in the fuel tank in favour of a more rounded design that runs all the way to the new tailpiece. The black plastic body panels and the footpeg mounts are new too, now done up in matte grey in place of the original silver and black.

Gone are the turn indicators integrated into the bikini fairing, now back on stalks jutting out from beneath the headlamp. The pilot lamp is now at the top, arranged to look like a stern v-shaped eyebrow. The headlight, while reasonably bright, still run on AC power, which means that it won’t emit a consistent beam of light, and the intensity will depend on the revs you’re doing. The mirrors have a two-tone finish, with a small body coloured wedge between the blacks. 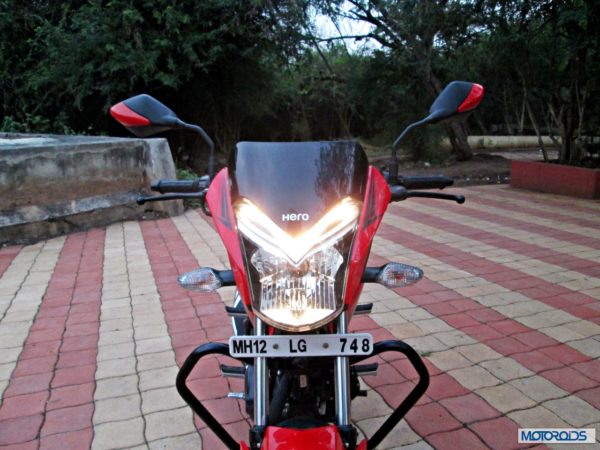 The instrument console is all-new, with pride of place going to the large analogue tachometer. The multifunction LCD panel below it consists of a speedometer and digital clock, in addition to the usual suspects. Nestled between both is a handy side-stand down indicator, and at both sides are telltale lights with a service indicator. There’s also has a handy safety feature where the ignition will cut off if the side-stand is down, helpful for the forgetful sorts.

Hero has equipped the Xtreme with an engine immobilizer switch, one of the first in its segment. A blue LED ring around the keyhole reminds you of it, but we feel that its tendency to stay lit long after the key has been taken out might attract unwanted attention. In another first for its segment, the Xtreme now comes with an USB mobile charger nestled under the seat. The charging is fast and reliable, although removing the seat every time to access the socket was a bit of a hassle. 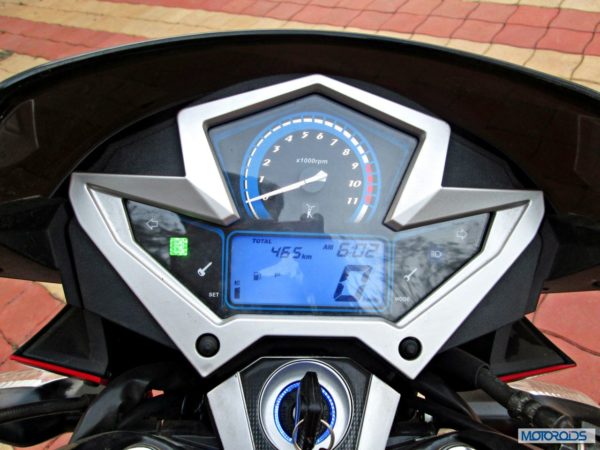 Everything on the console is backlit in a futuristic shade of blue, and it is all easy to take in with a glance. The Xtreme, however, doesn’t get an engine kill switch. Plastic quality is a bit iffy on the console and switchgear, which isn’t what we’d expect considering Hero’s dedication to quality in most of its offerings.

Moving towards the rear, the seat is now a single-piece unit, instead of split seats. The pillion grab rails are also new, featuring a split design that can come in handy if you want to tie bungee cords or carry small luggage at the back. We wish Hero had retained the red shock absorber springs from the old Xtreme, which would have given a nice contrast along with the red spark plug cover, but it now comes in conventional black. 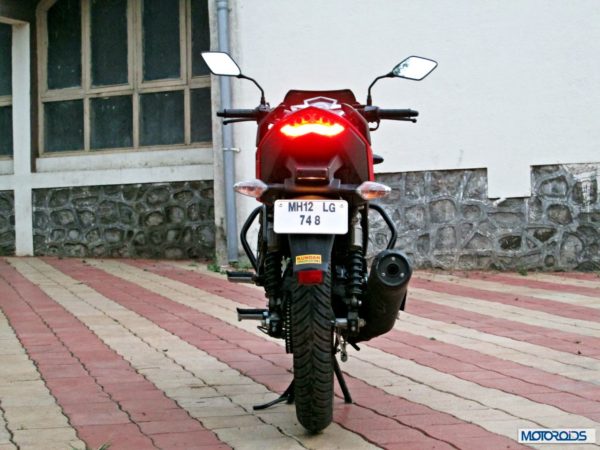 The turn signals integrated into the LED tail lamps have also followed the front end’s example and now get their own plastic stalks. It looks much better now, and so do the split five-spoke alloys. The exhaust shroud is also new, done up in chrome, and gels with the rest of the bike well. Hero has ditched the full chain cover of its predecessor in favor of a sportier half chain cover, and the now-exposed golden rear sprocket complements the golden GRZ gas canisters on the shocks well.

Whereas the old Xtreme had a rear mudguard that extended downward right from below the tailpiece, it now juts outwards then downwards, in the fashion of most modern sports bikes. 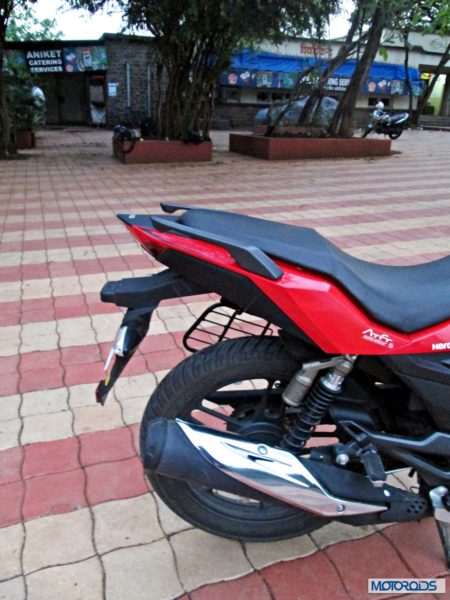 Powering the 2014 Hero Xtreme is the same 149.22cc Honda engine from its predecessor. It still makes 14.4PS of maximum power at 8500rpm and 12.8Nm of peak torque at 6500rpm. The gearbox is also the same as we’ve seen in the old Xtreme, and so is the Advanced Microprocessor Ignition (AMI) System, but the Xtreme is now 2 kilos heavier than its predecessor. 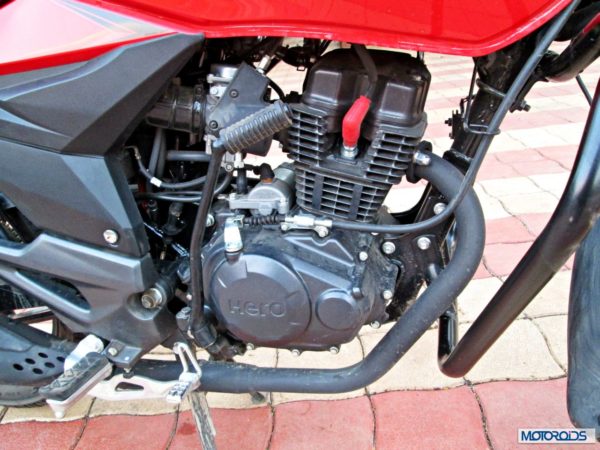 From standstill, the Xtreme will sprint to 60kmph in a respectable 5.6 seconds. Keep the throttle pinned on a long enough stretch of road, and you will eventually see 116 kmph on the digital speedo. These are decent numbers for its segment and the Hero Xtreme will certainly be able to play with the sportier jocks in the 150cc club, if not run rings around them. 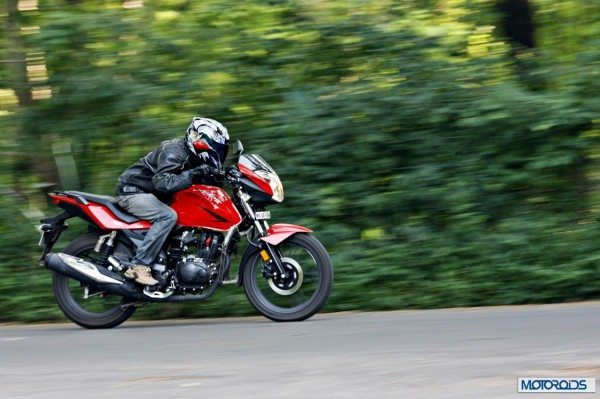 It is the way the Xtreme does its business, though, that can’t be shown by hard statistics. The Honda-developed mill powering it is one of the most refined machines in its category, and that still remains. Vibrations are practically non-existent till around 7000rpm, at which point you will be seeing 85-90 kmph on the speedo, in top gear. Around the 9000rpm mark, a slight tingling is apparent from the rubber-damped footpegs, although the heavy bar-ends on the handlebars prevent most of it from traveling up your arms.

Ride with a more restrained right wrist, though, and the Xtreme will return 48 kilometres to the litre, which is pretty above average. Most of our test was conducted in highway traffic, with the occasional city jaunt thrown in for balance. Combine that to the 13.6 litre fuel tank capacity and we are looking at more than 650 kilometres of riding before coming to a fuel stop. 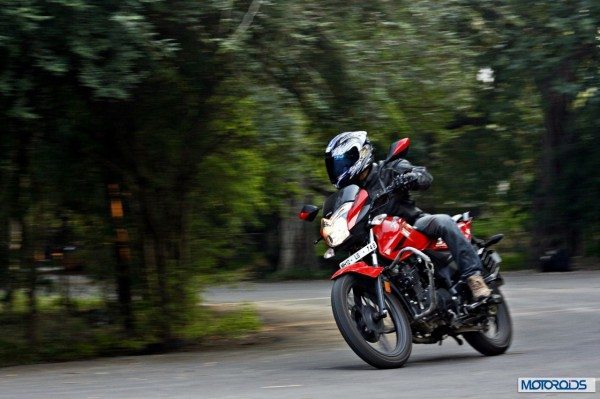 At the Auto Expo earlier this year, Hero showed off an Xtreme with a new engine producing a claimed 15.2PS of power. We don’t know if that is making its way to showrooms this year, but if it did, it would be a huge shot in the arm for the Xtreme’s performance. 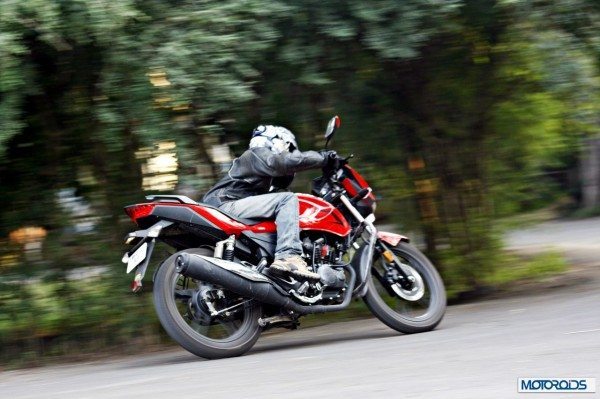 The 2014 Xtreme is probably the only motorcycle in its segment running on 18-inch wheels. A larger wheel means a heavier wheel, which means more inertial mass, which means more effort to turn the bikes in corners. Thankfully, Hero has fit in a slightly wider 110/90 tyre at the rear, so it is balanced out a bit here. 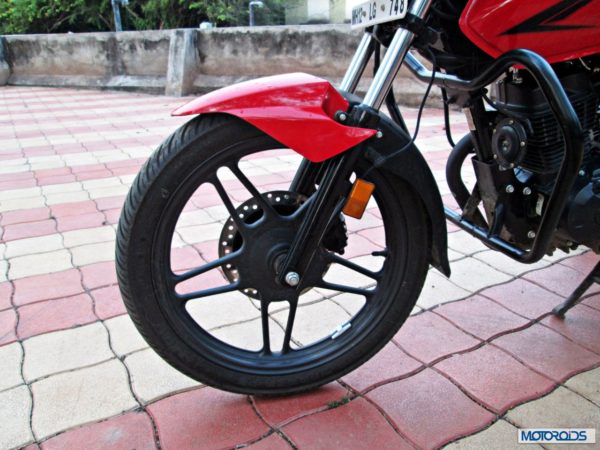 The Xtreme comes with telescopic forks upfront and conventional gas-charged GRS twin shock absorbers for the rear suspension. The advantage here is that it is a tried-and-tested setup that has also been refined over the generations. So it is comfortable enough, although the 5-way adjustable suspension is set up on the firmer side. Turning it all the way down would be advisable considering our less than perfect roads. 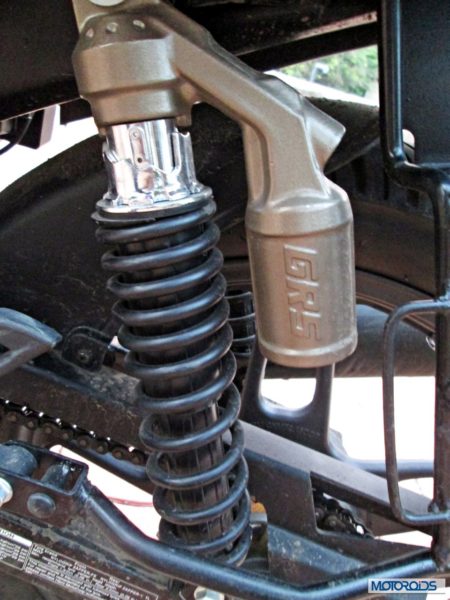 Considering the 18-inch wheels, the Xtreme is still an able handler, if not a particularly agile one. Thanks to the grippy wider MRFs, once you find it a line it is happy enough to follow faithfully. The clip-on ‘bars are pretty tall, for comfort, which makes countersteering a bit hard on the wrists, making the Xtreme less responsive when you’re shoving it hard.

The Xtreme comes with twin-pot 240mm discs as standard upfront, while you get a choice of 220mm disc or drums at the rear. Our review unit came with drums but, still, the front disc proved to be capable of hauling the bike to a dead stop in spectacular fashion. As long as the Xtreme is upright, it is surefooted and has an unwavering poise no matter how hard you clamp down on those front brakes. Part of the credit for this stellar braking also goes to the MRF Zapper tyres at both ends. Still, if you have the dough to spare, we recommend going for the dual disc setup. 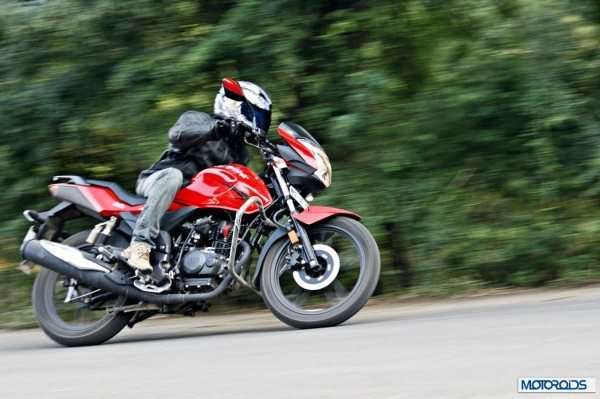 The Hero MotoCorp Xtreme 2014 is available in five colours, Jazz Blue, magma Orange, Fiery Red, Mercuric Silver, and Panther Black. It comes in two variants, with the dual disc one retailing for INR 70,332 (ex-showroom, Mumbai), while the front disc/rear drum combo will save you approximately four grand. That is almost three grand cheaper than its predecessor. 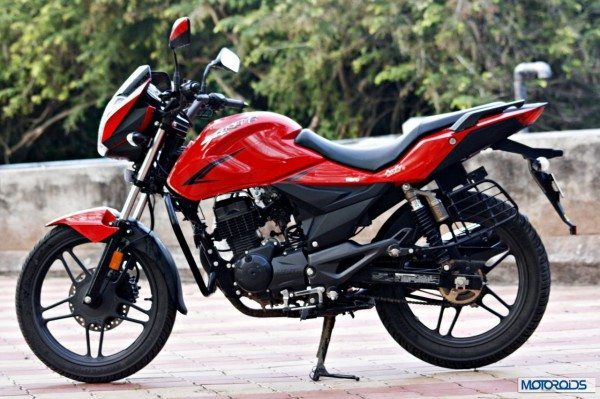 If you look upon it as a continuation of the CBZ, the neo-legendary bike that kickstarted the era of performance bikes in India, the 2014 Xtreme is a mixed bag. There are faster and sportier alternatives to the Xtreme that will leave a bigger grin on your face if you are in the mood for some spirited riding.

But, if you look at it as a standalone offering from Hero MotoCorp, the Xtreme is certainly a capable 150cc motorcycle in its own rights. It is reliable, efficient and comfortable and does its job without a fuss. Its competitive pricing also undercuts the competition by a fair margin, making it an attractive proposition for the wallet. 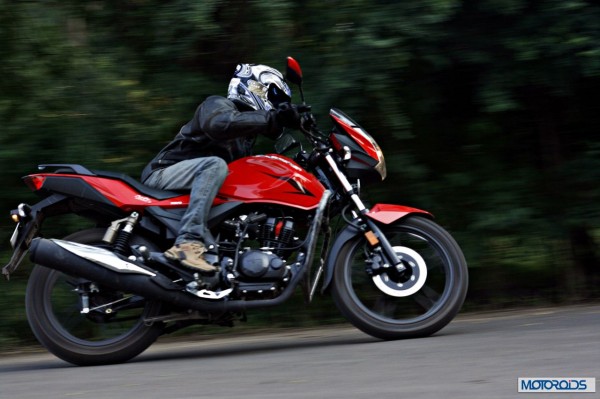 Add to that Hero MotoCorp’s vast sales and service network and above average resale value, and the Xtreme comes across as a value for money product. It is not a rip-roaring hooligan, but rather, a gentleman matured through experience and small improvements throughout its lifetime.

And you know what they say about finely matured wines. 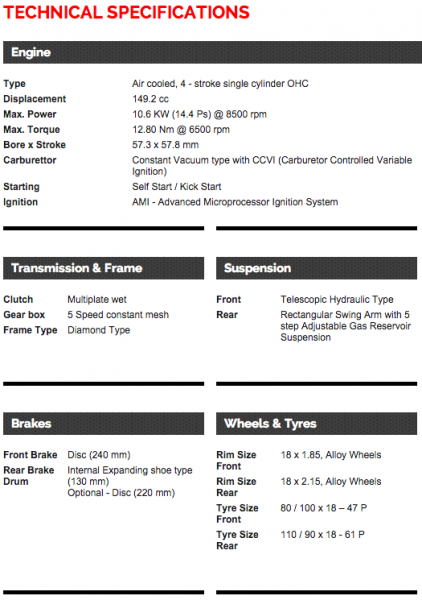 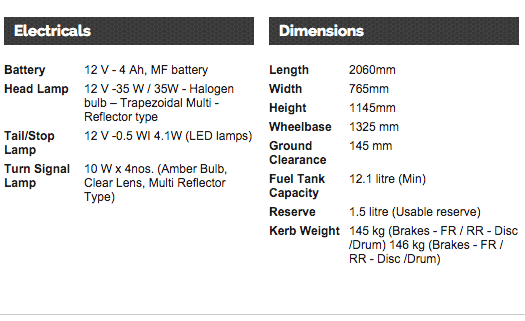