Home Features How’s it like to own the Kawasaki Ninja H2 in India? Owner Pushkar Khot shares his experience 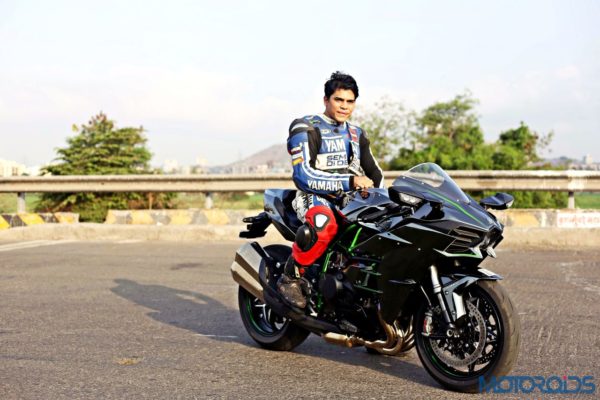 I could see the astonishment on my face, as I saw my reflection in the silver-mirror paint specifically developed for the H2. I would have given anything to get astride this one. This time though, I had to hold my feelings as this Japanese masterpiece belonged to our new friend and one of the five owners (including MS Dhoni) of the Kawasaki Ninja H2 motorcycle in India. Pushkar Khot is the name of the guy all of us are meant to be jealous of.

Owning a litre-class motorcycle is already a ludicrous enough thought in a country like ours where the temperatures make the roads melt. The tribulations ahead of a litre-class bike owner are many. Besides the regular engine heat ups, finding high octane fuel is another task. In fact, even a metropolitan city like Mumbai has only five to six petrol pumps which cater to the demand of those hunting for 95+ octane fuel. And don’t even get us started about the surfaces these machines are ridden on in this part of the world. 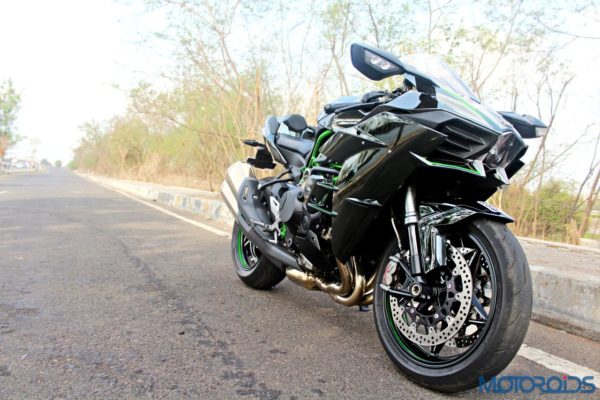 Those drawbacks, however, do not stop some biking aficionados from buying their dream machine. So while buying and owning a ‘regulation’ litre class is painful enough for most, how eccentric does one really have to be to shell out 35 big ones on a supercharged monstrosity that currently has the entire biking world in awe. Our initial thoughts, like everyone else’s would be sceptical. However, as we realized after a few early-morning hours with the bike, the reality has quite a few contrasting shades of its own. The media bikes for this super exclusive model are yet to arrive and it would be some time before we get you our exhaustive review on this demonic machine. So while we couldn’t lay our hands on this supercharged motorcycle for an exhaustive review, we decided to ask one of the owners about his experience with this hyperbike.

Pushkar Khot, the proud owner of the H2 here in these images, has had a long stint with performance motorcycles and he has a taste for fully faired motorcycles. He has previously owned motorcycles such as the Honda CBR1000RR, Suzuki GSX-R1000, Kawasaki ZX-10R, Suzuki Hayabusa, Ducati Monster 769 (the only naked roadster in his collection) and Kawasaki Ninja 250R. 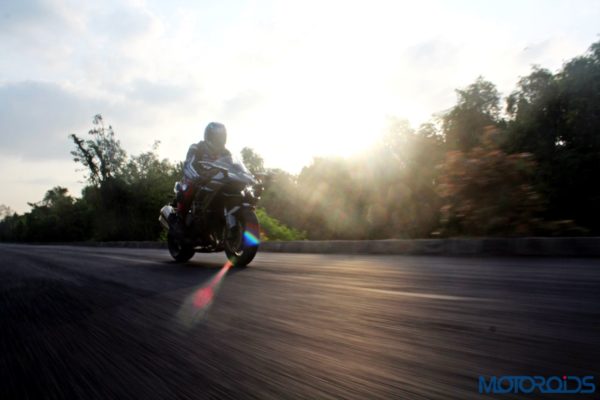 We called Pushkar for an early morning shoot of his prized possession and he very kindly obliged. We had prepared a questionnaire for him, meant to bring forth his thoughts on how easy or difficult it is to own an ultra expensive motorcycle like the H2 in the taxing (both literally and metaphorically) Indian  conditions.

Here is what Pushkar had to say answering our questions:

How many kilometers have you clocked on your new Kawasaki Ninja H2?

I have clocked a little over 1,200 kilometers on the Ninja H2 till now and the motorcycle is due for its first service.

Which motorcycles did you own prior to the Ninja H2?

Before the Kawasaki Ninja H2 made way to my garage, I have owned the Honda CBR1000RR, Suzuki GSX-R1000, Kawasaki ZX-10R, Suzuki Hayabusa, Ducati Monster 769 and Ninja250R.

Why did you choose the Ninja H2? Did you consider some other motorcycles before making a decision?

My love for the Ninja H2 started brewing a few years ago when I first saw Kawasaki’s new supercharged engine when it was first revealed by Kawasaki a couple of years ago. I was quite excited to learn about the supercharged engine hence I waited to see their final product, which came out last year in the form of the Ninja H2. Yes, I did consider the 2015 BMW S1000RR and the Ducati Panigale 1299 but it was the Ninja H2 that I finally fell for. 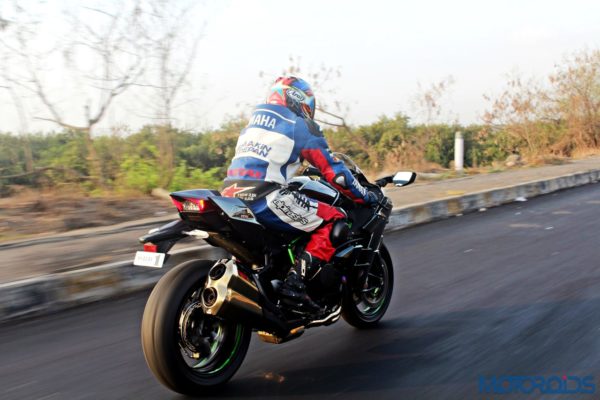 How is the handling? Is it nimble or does it require an extra effort?

I have owned a Suzuki Hayabusa for over a year and a half. Hence, I find the Kawasaki Ninja H2 to be much lighter. The Suzuki Hayabusa, which weighs nearly 260 kilogram, is about 22 kilogram heavier and has a longer wheelbase than the Ninja H2. So, for me, the Ninja H2 is relatively light. When it comes to handling, I find the Ninja H2 to be very nimble. It might not be as nimble as the ZX-10R on the track because of the slightly higher weight and a few other things, but how many times are your going to visit a race track anyway?

How friendly is the riding position/ergonomics?

The Kawasaki Ninja H2 boasts great ergonomics, evident as one tucks himself into the hip-supporting pads behind the rider-only seat. The seat supports the rider during intense acceleration and high speed runs. Similar to many supersport motorcycles, the riding position of the Ninja H2 is very aggressive and one may find it difficult to ride over long distances. Riding the motorcycle in bumper to bumper traffic too is very difficult. 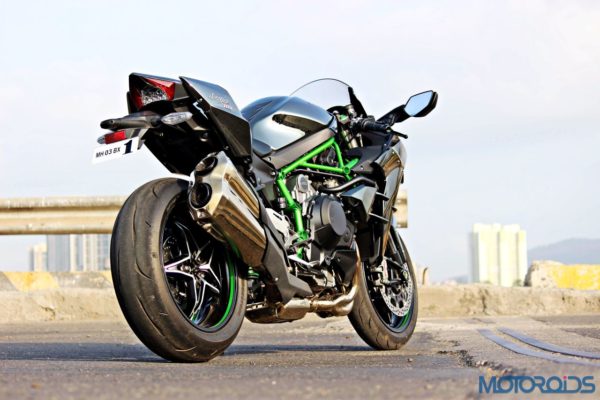 How is the power delivery and gearshifts? This is a new motorcycle so you would still be running it  in but how was your experience over the 1000 km you have clocked on this motorcycle?

The H2 boasts tremendous power. It’s quite docile upto 4000 rpm, post which  you feel a momentous thrust that I have experienced on no other superbike till date. Its around the 4000 mark that the supercharger really starts working its magic. The power, post the 4K mark gets into a different zone, though it starts building progressively thereon. Another step-up in power is felt at around 8000 rpm. In fact, in my personal view, the Ninja H2 delivers near identical thrust in the 3rd and the 4th gear which many other motorcycles in its segment manage only in the 1st and the 2nd gear.

The gear shifts are precise too but one may have some trouble finding the neutral sometimes. The Ninja H2 is equipped with Dog-Ring transmission which delivers quicker and smother gear shifts. The Quickshifter too works flawlessly and I find it to be smoother than the likes of the BMW S1000RR, Aprilia RSV-4 and the Daytona 675. I have owned and ridden many powerful motorcycles in the past but the Ninja H2 delivers incomparable power and one has to ride it to believe it. 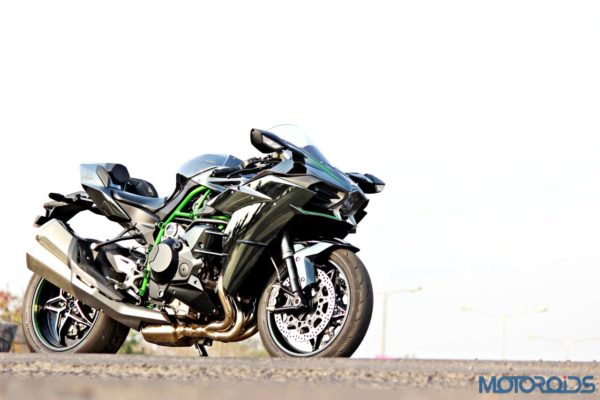 How well do the brakes respond? How would you rate Kawasaki’s safety net (ABS, Traction Control)?

The Ninja H2 comes 330mm Brembo semi-floating discs with a thickness of 5.5mm at the front and 250mm single disc at the rear. Both brakes offer phenomenal response and do a fine job of stopping the motorcycle with utmost ease. The ABS and Multi-mode traction control are a blessing. The traction control fulfills its duty very well but I’m not sure if it is as good as the Yamaha YZF-R1’s electronic net.

The Ninja H2 also has a rev limiter which can be set at desired rpm, ranging from 9,000 rpm all the way to 14,000 rpm mark. The Ninja H2 also has four power modes and each has one of these modes have a three stage traction control setup. You can also opt to ride the Ninja H2 in Rain mode which limits the power output to 50 percent while the traction setting goes to the highest level.

How is the headlight performance at night?

The Ninja H2 comes with a factory fit HID light hence it offers bright illumination but it is not as effective as the Kawasaki ZX-14R which comes with four separate lights. 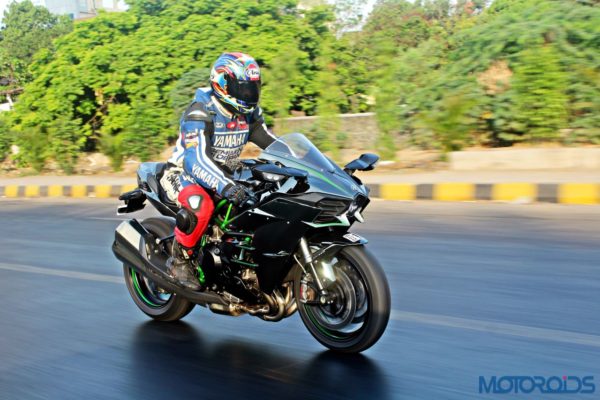 What is it about your Ninja H2 that makes you feel proud?

Simply everything! You may think that I am making up things but the Ninja H2 is truly a benchmark for other products in its segment. The bike is very limited as of now as there are only five units in India. This bike is a definite attention grabber and has tremendous road presence. The exclusivity makes me feel proud; especially knowing the fact that Indian cricketer MS Dhoni also has one. I am a big fan of MS Dhoni so having the same motorcycle as him makes me feel joyful.

You are absolutely in love with the Ninja H2 but what about the negatives? What drawbacks did you find in the motorcycle?

There are not many negatives in the H2 except for the excessive heating, which is a drawback on almost all the superbikes. You tend to feel the heat during slow speed riding, but things are relatively better on the highway and open roads. Another downside is the weight of the Ninja H2 which is relatively heavier than other motorcycles in its segment but that too is manageable. One can replace the stock exhaust with an aftermarket unit which can save quite some weight.

Next page for more>> 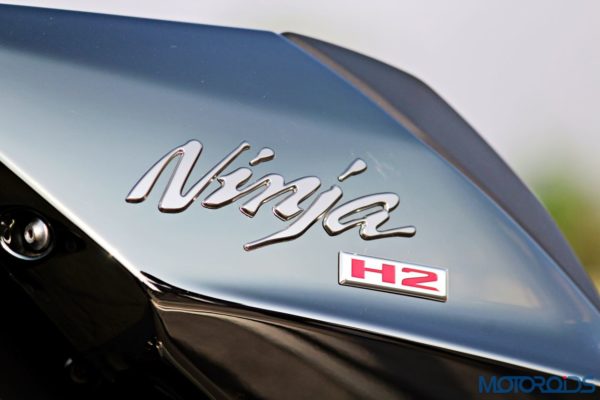 What has been your longest ride on the Ninja H2?

The longest ride on my Ninja H2 has been from Thane to Charoti and back which is about a 200 km round trip.

Your Ninja H2 is still due for its first service but what are the service charges that Kawasaki has quoted to you? How long is the service interval?

How much on an average do you spend on fuel every month?

I spend about Rs 10,000 on fuel per month but that’s particularly because I opt for 97 octane fuel which is relatively expensive than the regular fuel (upwards of Rs 100 ). I also add octane booster to increase the octane level of fuel as Kawasaki highly recommends using higher octane fuel for the Ninja H2. 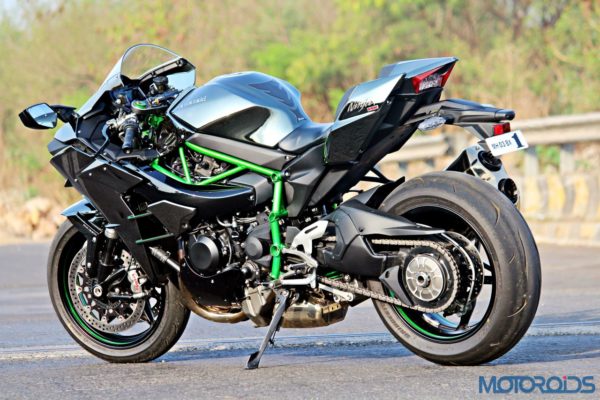 Never leave this bike out of your sight besides your personal parking. Everybody wants a snap with the Ninja H2 and no one would miss an opportunity (*laughs*). The paint has a mirror finish, so even small scratches look prominent. You really have to be extremely careful with this one.

What tips would you give to prospective Kawasaki Ninja H2 owners?

I would recommend treating the paint with protection film and also apply a paint sealant. Dr Beasley’s Nano resin paint sealant is specially developed for the Kawasaki Ninja H2 and H2R. Secondly, I would recommend using only 97 octane fuel for the motorcycle. In case the fuel is not available, opt for any octane booster.

Now that you have bought the Ninja H2, what products are next on your bucket list?

I have just purchased the motorcycle and it is one of the best superbikes available in India right now and hence I do not plan to upgrade in the short term. Even if I do upgrade, I plan to hold on to the Ninja H2. But if I have to add another motorcycle to my garage then it would be the MV Agusta F4 RC. 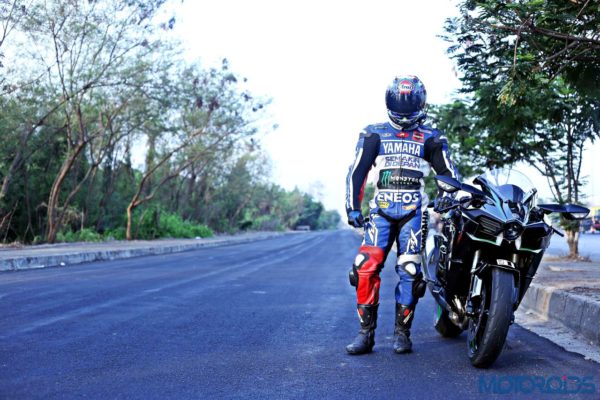 Finally, and I know not many prospective buyers would ask this but what is the fuel economy that the H2 returns to a litre of fuel?

The motorcycle delivers nearly 14 to 15 kilometers to a litre. You can squeeze out as much as 18 kmpl if you constantly ride it below 4000rpm on the highway.

So that’s what Pushkar had to say about his Kawasaki Ninja H2. We will stay connected with him for more details as he clocks more kilometers. Meanwhile, enjoy these snaps of the Ninja H2. Don’t forget to share your views with us through the comments section below. You can also share your ownership experience with us at feedback@motoroids.com