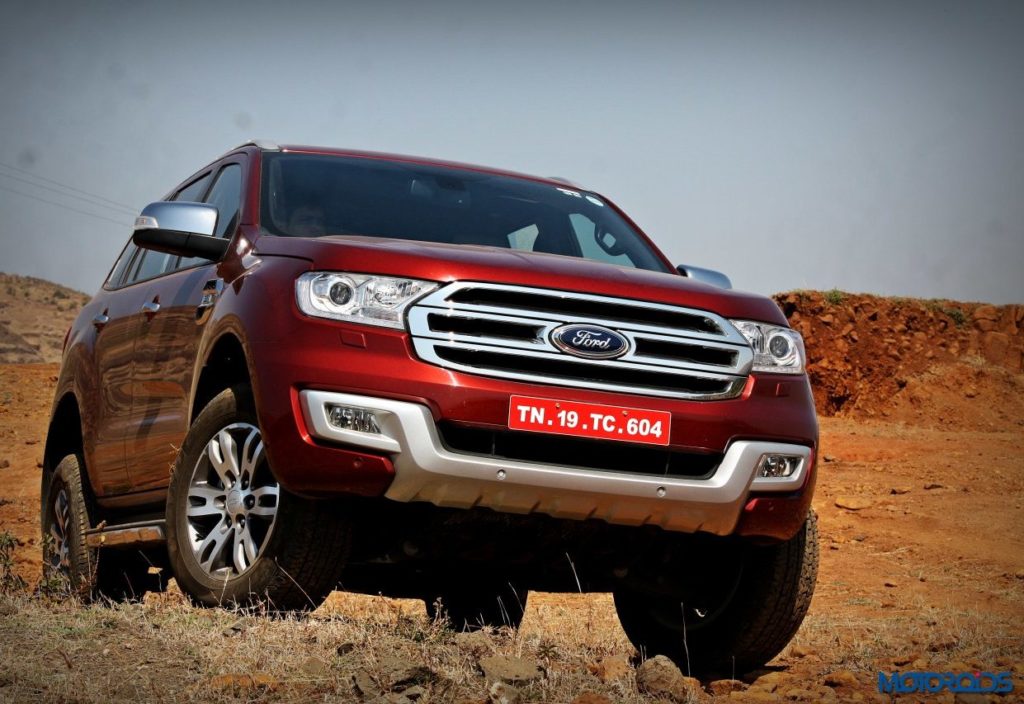 We drove the 2.2 litre turbo diesel 4×2 AT variant of the Endeavour some time back, and came away amazed with its refinement, comfort and do-it-all demeanour.  The bigger 3.2 4×4 AT version, however, adds a lot more to the package than just more power and torque. The differences between the two variants are significant, and we’ll keep this review focused primarily to that aspect. For all the finer details about the vehicle, you can read our previous review of the 2.2 4×2 AT variant by clicking here.

Alright then, so this one has the bigger engine of the two, and it’s got AWD as well – so does it look any different?

For those interested in the Endeavour purely for its Herculean size and presence, the good news is that the differences on the outside are minimal. If you are going for the Endeavour purely to scare away the little soap boxes on the road, it wouldn’t matter much whether you’re driving the 2.2 or the 3.2, 4×2 or the 4×4, MT or AT (we’re referring to the Titanium variant here). 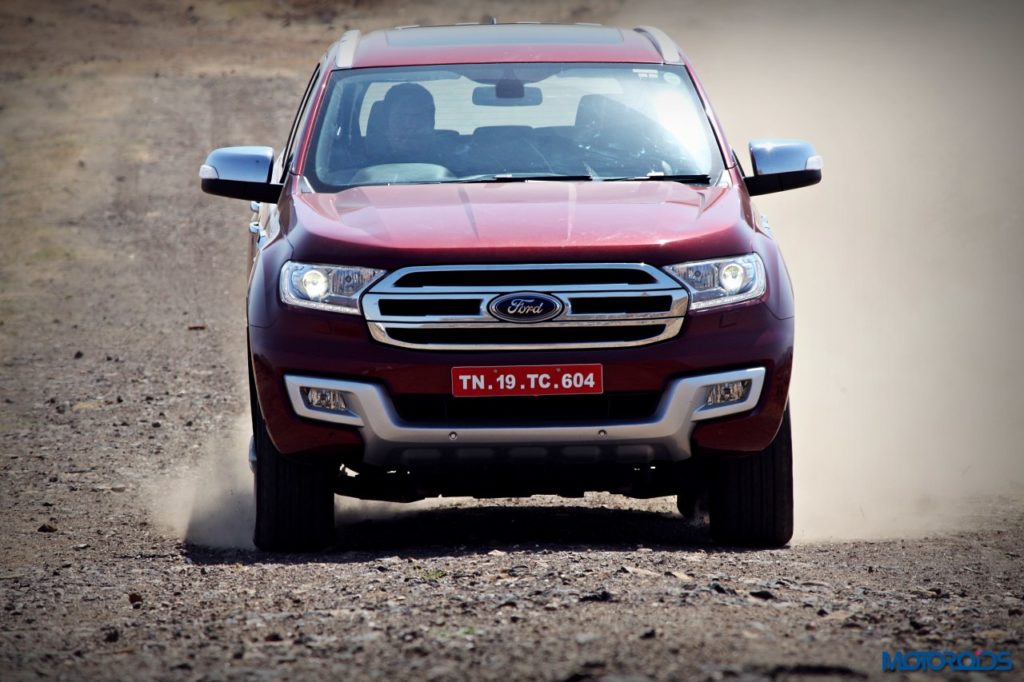 The two cars look almost exactly similar on the outside, with the only differentiating bit being the 2.2 / 3.2 6 AT / MT embossing over the chrome embellishment behind the fender. Another distinction is the trim level and 4WD lettering at the rear, though this shouldn’t be a bother if you are going for the top of the line Titanium trim.

The only external distinction exclusive to the 3.2 litre 4×4 AT variant is its enormous panoramic sunroof. You don’t, however, ever get to see the back of the T-Rex in a jungle – unless you’re a monkey. And if you are one, it doesn’t matter anyway. The Endeavour, as things stand, is the Tyrannosaurus Rex of the Indian passenger car jungle – and you wouldn’t see that roof from a driver’s seat, even if you were behind the wheel of a G-Wagen 4×42 .

Go on, buy the 2.2 4×2 Titanium if instilling the fear of metal in your fellow road users is your only mission, though under the skin, the 3.2 offers a lot more to the discerning car buyer.

And what if I’m one of those ‘discerning’ car buyers with an extra wad of cash?

In such a case, we’d encourage you to invest all the extra money asked for by Ford in the 3.2 4×4 AT variant. The bigger engined variant is unquestionably a more capable machine – it’s extremely perceptible in the way it drives and the kind of things it could do. The 2.2 4×2 and the 3.2 4×4 have a substantial gap between them, and it’s clearly observable in more than just one ways.

Enlighten me about the powertrain first 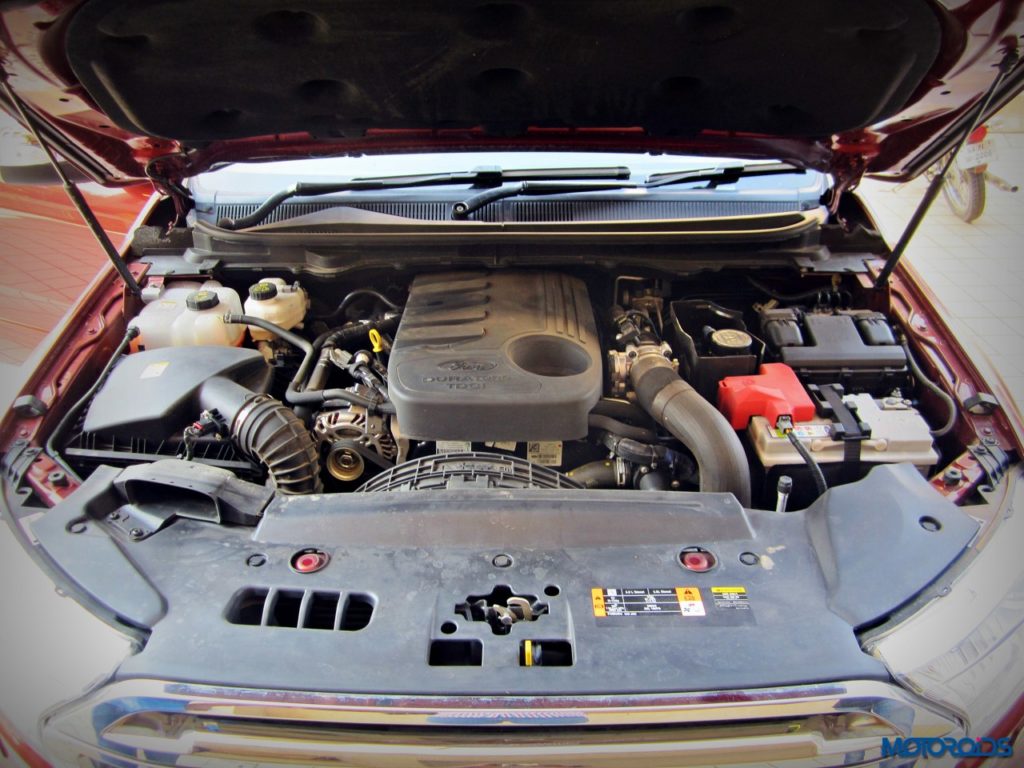 The apparent turbo lag on the smaller engine is almost non-existent here. The more important aspect of the bigger engine, however, is the fact that it’s capable enough to propel this behemoth to speeds in excess of 150 km/h without appearing to be struggling while at it. The smaller engine feels ever so mildly underpowered for times when you’re in a rush. The 3.2 feels at home while crawling at city speeds, while cruising gingerly on highways and also when you prod it hard to put that irritating truck ahead in the rear view mirrors. 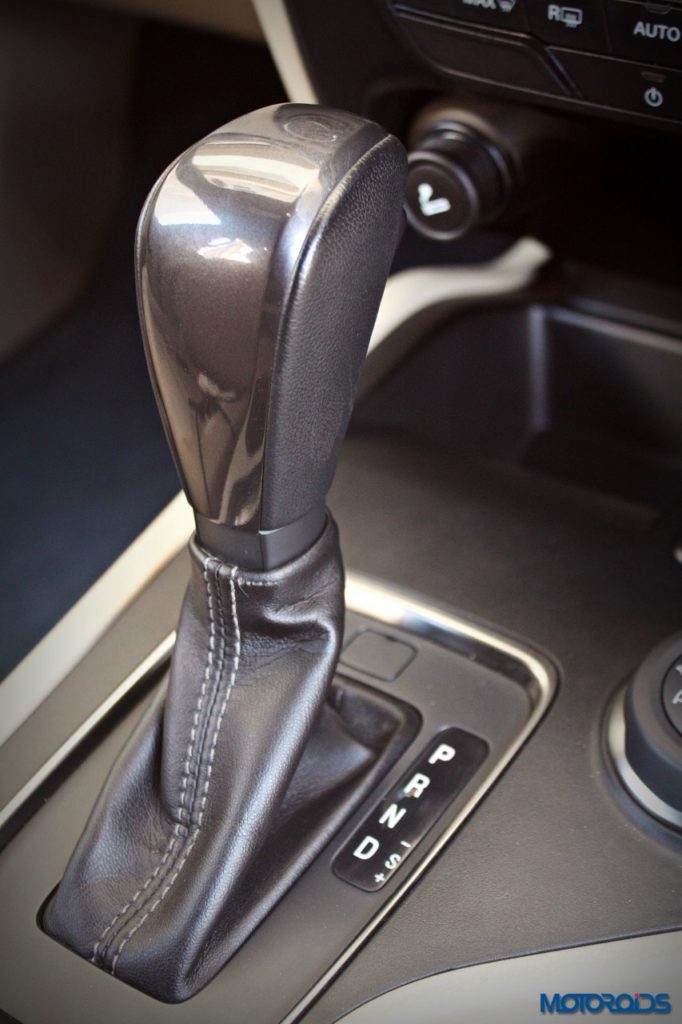 The six speed transmission is butter smooth, if mildly lazy. The torque converter unit might not be as stupendously quick as some of the other modern dual clutch autos, but for all practical intents and purposes, it cannot be termed as a slouch either. It shines with its seamless, jerk free shifts which translate into a comfortable, tranquil experience inside the cabin.

To sum it up, the Endeavour 3.2 AT is currently, by far, the best engine transmission combo you can get out there among all SUVs in that price segment, and in a segment above.

Does it ride or handle any different?

Yup, it does. The 4×4 system with its additional pair of driven wheels and AWD tech ensure that additional grip and control is always at hand whenever things tend to get slippery. The 4×2 version which handles reasonably well for its segment, size and weight, did signal us to lift off while descending down the sweeping curves of Kasara a tad earlier than we’d have expected. 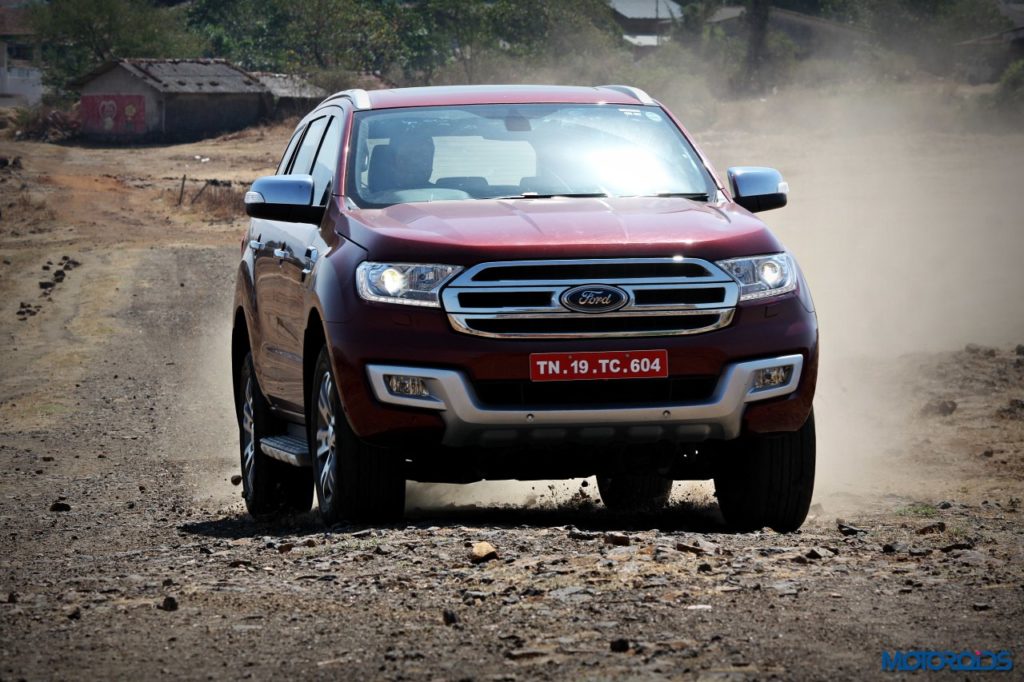 The 4×4 felt more planted and juggled the drive to wheels perceptibly better, and allowed us to push harder through the bends. The 4×4 felt more sure footed, and clearly so on both straights as well as through loops.  The extent of bodyroll, which is appreciably well contained for the category, is similar to the smaller engined variant. 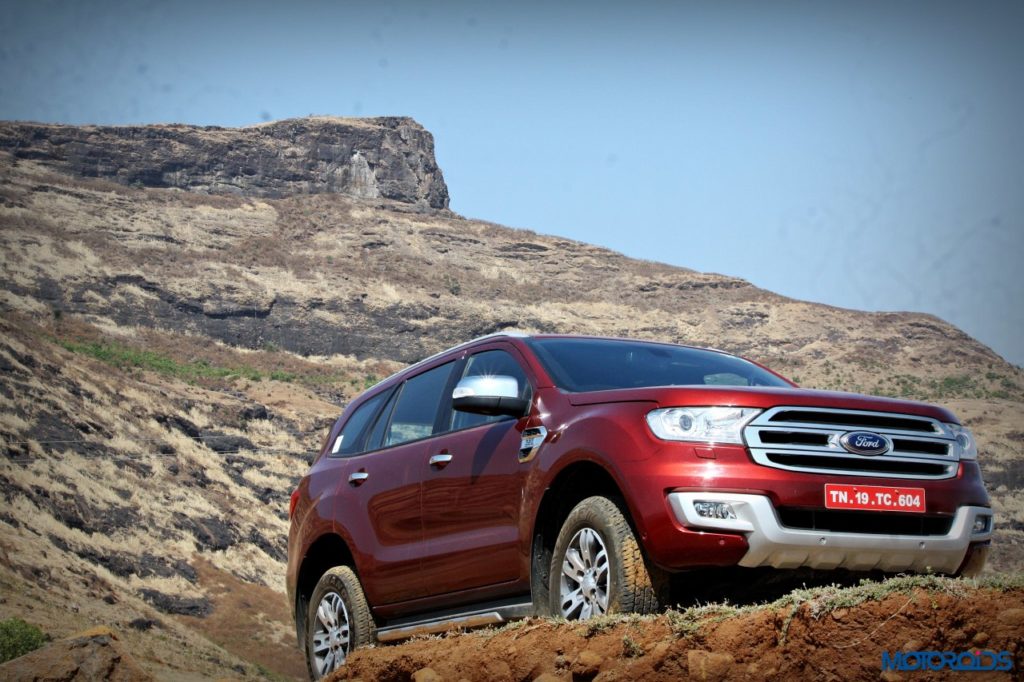 The ride quality on the two cars remains similar, and both variants are capable of flattening the most punishing terrains without letting the occupants get an inkling of the surface underneath those wheels. What also doesn’t change is the church-like tranquillity inside the cabin, thanks to the obsessive noise insulation by Ford and the speaker driven active noise cancellation which makes this SUV’s cabin by far the quietest among its peers.

Do I get any extra goodies apart from the engine and transmission for the extra money?

Oh, you get lots. Smaller things include a puddle lamp beneath the wing mirrors, which are heated exclusive for the 3.2 4×4 AT variant. You get an extra, seventh airbag to protect the driver’s knee. Bigger joys include a jumbo-sized electric panoramic sunroof, hill descent control and power folding third row seats. You also get the Active Park Assist wizardry on this one, a technology that can parallel park your car automatically, once you have shown it a slot big enough to swallow its girth. 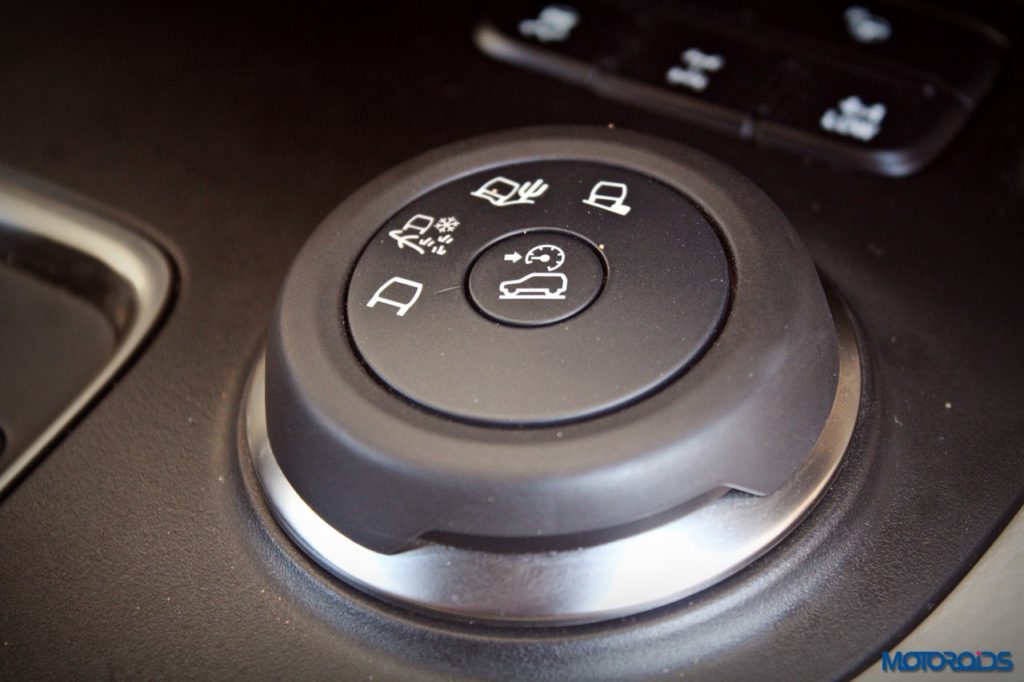 What, however, takes the cake among the list of the extras on offer with the 3.2 4×4 AT is Ford’s Terrain Management  system, which makes the Endeavour adapt to a variety of surfaces without the driver having to manually modulate the throttle and brakes specifically for those terrains. Similar in concept to Range Rover’s Terrain Response System, this bit of tech is quite a fancy feature for this segment of cars.

Tell me more about this Terrain Management bit – does it work?

To start off, the Ford Endeavour, even in its 4×2 guise, with its humongous ground clearance, and a body-on-frame layout is a capable enough SUV off the road. The 4×4 version offers a significant bump up in its off-tar capabilities with drive control over all four corners. On top of that, the Terrain management system finely controls the power delivery and transmission behaviour while also deploying electronic aids to find the most amount of traction and control over a variety of surfaces. 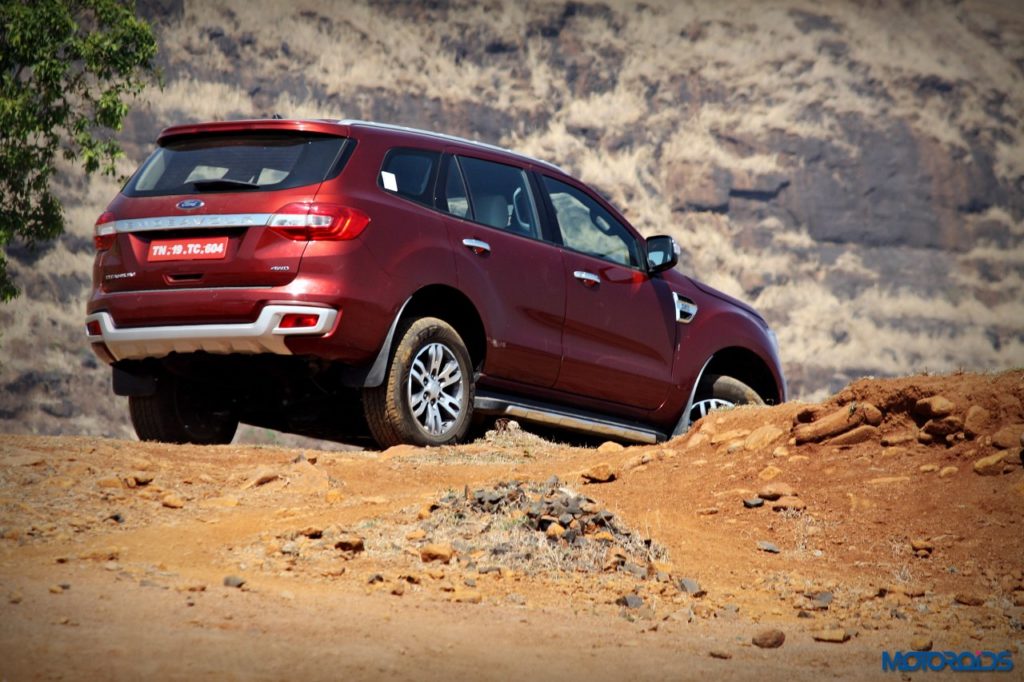 The system, integrated with an Intelligent 4WD System lets you shift on the fly into one of four settings to match the terrain. Here’s what the various modes do

We took the Endeavour to a rugged, dry terrain, with loose gravel and big stones on a downhill / uphill course trying to obstruct our way. It was the kind of a terrain where your everyday sedans and all of the pseudo SUVs / crossovers would bust their juice bearing, low hanging reservoirs. The Endeavour, however, literally sailed over all these obstructions, never calling for a need to switch to any of the aforementioned modes. It’s a terrific off-roader even in the normal mode, and we’ll probably have to wait for another day to figure if these modes actually make a difference in the conditions they’ve been designed for. 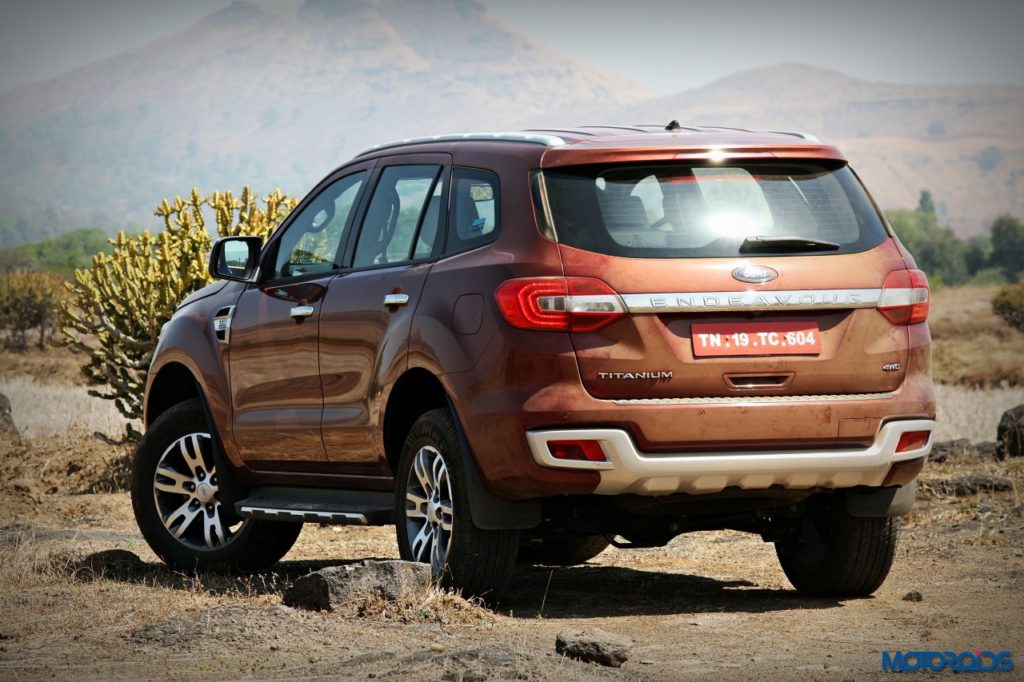 Is it a deal then?

By all means! As we look at it, there simply isn’t a better do-it-all machine on offer right now on the market for this price. The Endeavour 3.2 AT is possibly the most complete car you can buy in India right now for the least amount of money. For a sub-30 lakh budget if we had to pick one car today, this would be it. Need we say more? 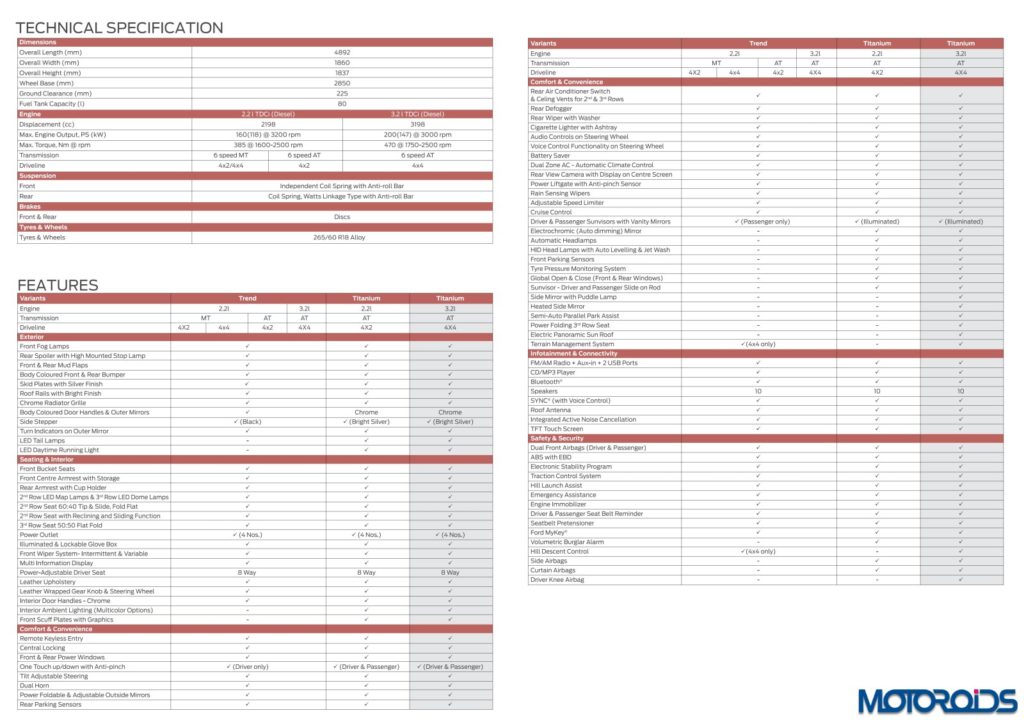