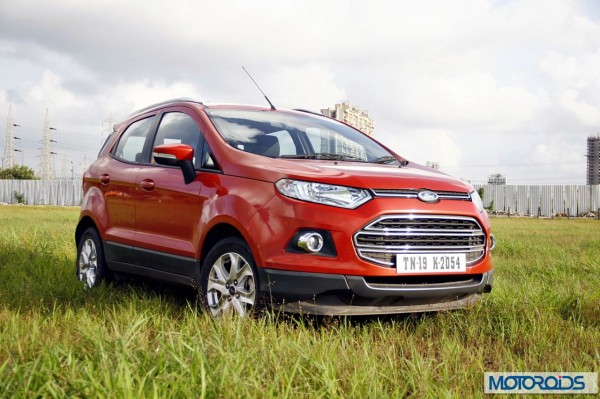 After having driven the 1.5 TDCi (Diesel) and the 1.0 Ecoboost (Petrol) versions, the Ecosport had clearly set high expectations for us and we looked forward to the 1.5 TiVCT (Petrol) Automatic. This variant is powered by a 1499cc engine tricked with Twin Independent Variable Cam Timing gadgetry that helps it produce 112 PS @ 6300 rpm and a 140 Nm of torque @ 4400 rpm. Apart from the engine, the interesting part on this specific model is the dual clutch transmission that is called “Powershift” in Fordspeak.

Click here for the review of the Ecosport TDCI diesel 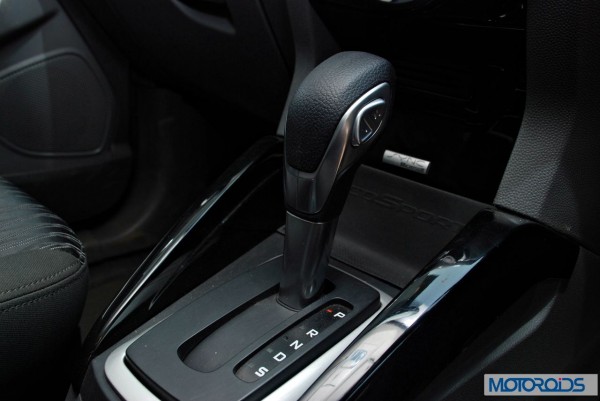 Essentially, the 1.5 Ti-VCT`s Powershift is a dual clutch six speed automatic gearbox. Ever since the advent of affordable technology, dual clutch transmission seems to be the weapon of choice for every auto manufacturer wishing to go the automatic way. A dual clutch transmission uses two separate clutches within the same housing with each dedicated to odd (1,3 & 5) number and even (2,4 & 6) number of gears. In theory it offers the advantage of faster shifting times for an automatic as well as providing the option of manual shifts, so have manufacturers found the golden path? To an extent, we’d say yes – especially with the technology getting more affordable and accessible on cars such as this. This unit is also shared with the Fiesta, and Ford claims an impressive 10 years/240000 km maintenance free usage! 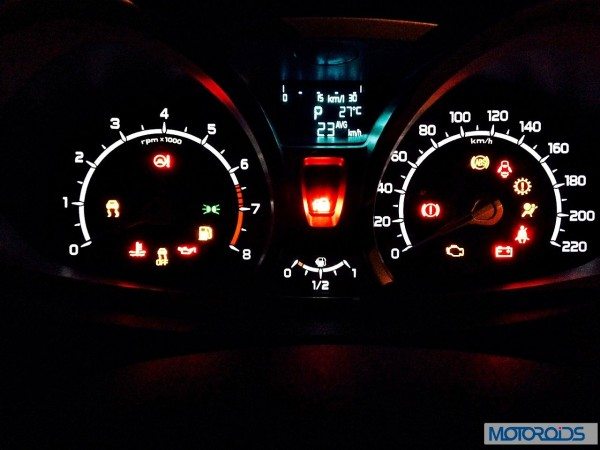 Fire up the engine and it comes to life with a wee bit of coarseness. The slight gruffness, however, doesn’t translate into vibes, and the engine turns out smooth in operation with the vibes very well contained. Slot it into drive and lift off the brake and like all automatics it gets into the “creep” mode which is a boon for chugging along in slow moving traffic. Give it a healthy dose of throttle and it exhibits a clutch slip feel until the tachometer needle nudges 2500 rpm when it shifts into the 2nd cog. Initial response isn`t as zesty as the power output (112 PS) figures suggest but once in the second gear, the Ecosport makes good progress with the transmission working seamlessly and diligently at the said rpm. Apart from the 1st to 2nd transition, the gearbox swaps ratios flawlessly. 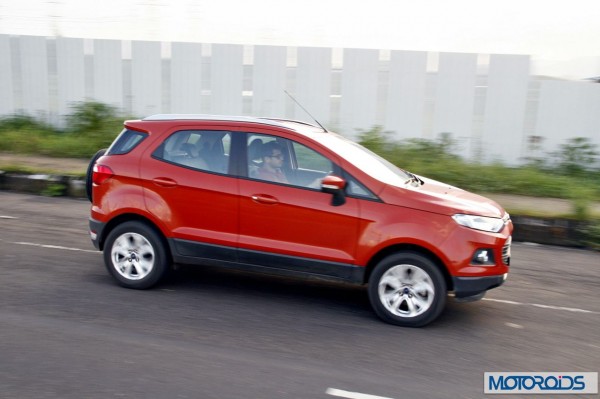 Our road and traffic conditions do not always permit relaxed driving though, there are times when you want to make that quick overtake and switch back to the middle lane for cruising. It takes a little while getting used to the fractionally delayed response of automatics until you learn the art of being automatically quick! Don’t be surprised if you find yourself mashing the throttle often in a bid to make that quick getaway which is also accompanied by that sudden downshift. However, to overcome all that, the Ecosport also comes with a small button (`+` and `-`) on the drive selector lever which works in conjunction with the `Sport` mode. 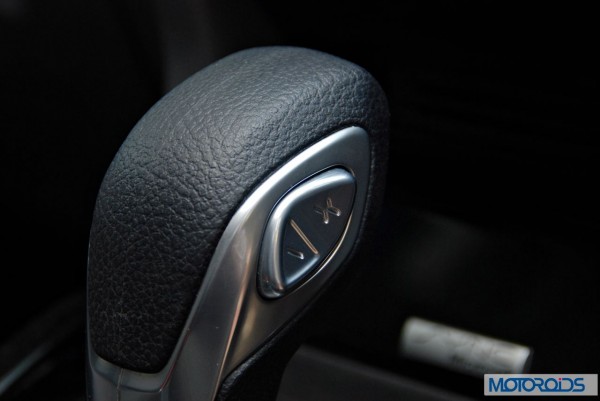 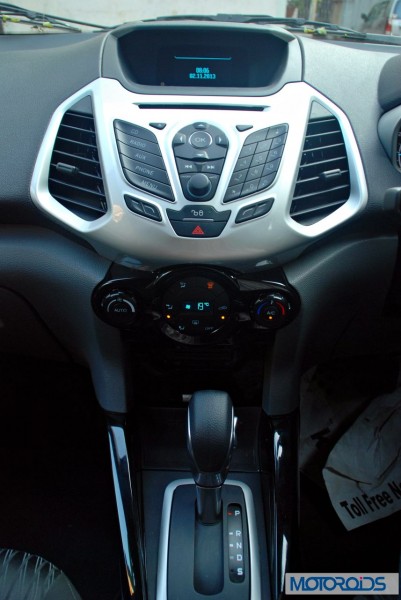 As suggested, the mode gets this compact crossover into a lot more zesty form. The ECU allows the engine to be revved right up to its redline (6500 rpm) before it slams it into the next cog all the way to 6th.You can’t drive in the sport mode always since it won’t upshift anything under the redline which is not necessary all the times. While the drive mode feels sluggish in comparison to the sport mode, the best way to extract optimum performance is to stay in the sport mode and shift manually as required (still beats the hassle of manual transmission).

What could have been better is the option of a paddle shifter or the `+` and `-` function accommodated with the drive selector lever instead of a button which somehow does not feel as intuitive to use. While acceleration figures may not make much sense considering this is a compact SUV, for the records, the Ecosport manages the 0-100 dash in 13 seconds. Its light steering (as in TDCi and Ecoboost) along with its short overall length makes it a nimble handler by compact SUV standards. We found the steering to be surprisingly light even in the TDCi version and the TiVCT is not different. It remains a joy to use within city and weighs up enough as speeds built, nothing much to complain about here. 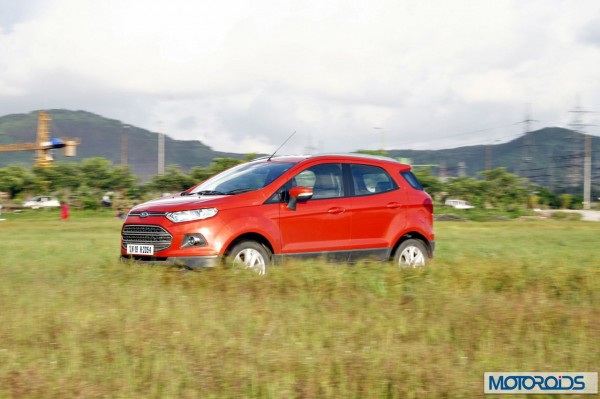 Handling is synonymous with Ford cars we all know. The 1.5 Ecosport handles slightly different to the 1.5 TDCI. While the overall handling traits are still class leading, there is a wee bit of bounciness to be experienced at the front. The suspension feels slightly on the harsher side while negotiating undulation at slow speeds, it sorts out beautifully as the speed build up.

The Titanium trim is equipped with driver safety aids (ABS, Traction Control and EBD) which work flawlessly in keeping everything under control should you mistake this for a typical Ford sedan/hatchback. We had a first- hand experience of the effectiveness and inclusion of these aids when we had to slam the brakes (typical panic situation) when a cabbie pulled across lanes for a quick U turn. The Ecosport managed to slow down without any lockups/swaying/fish tailing to much surprise of the occupants. 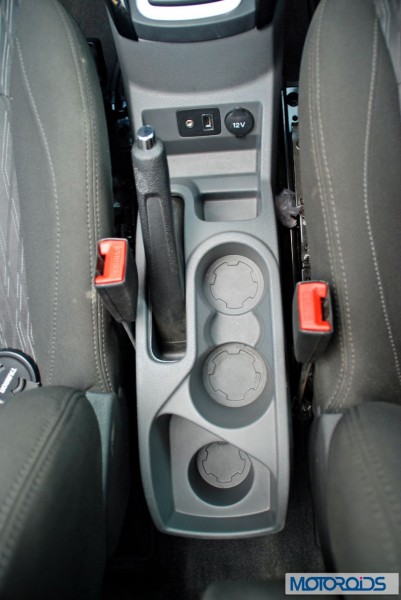 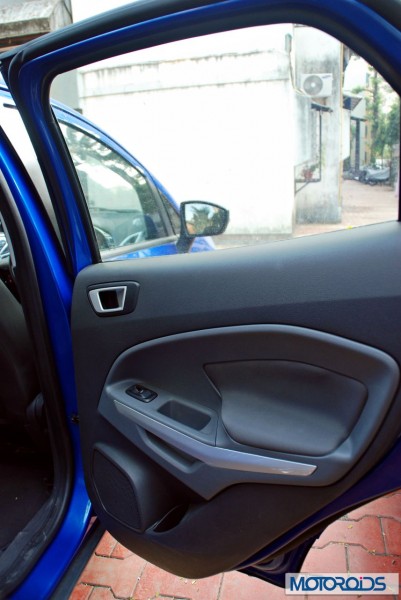 Internal space management, as we have mentioned on earlier occasions as well, is one of the high points of the Ecosport. Ford have packaged the Ecosport immaculately well, and even with the limited volume it encapsulates within its compact shell, the compact SUV offers ample cubbyholes, pockets and holders to make it one of the most practical cars around. 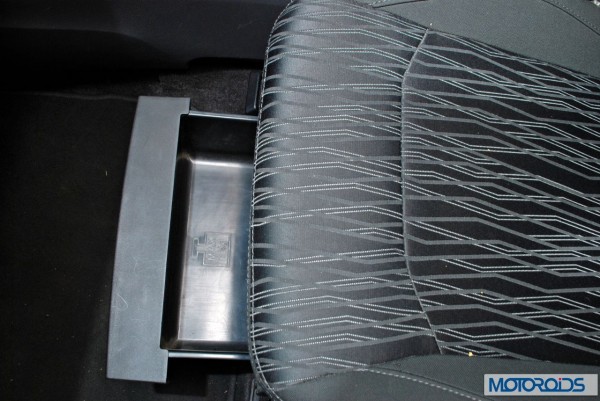 There are as many as 20 stowage spaces scattered around the EcoSport’s cabin. The glove box, to start with, is dual partitioned for better segregation of different items. It can hold upto six beverage cans that will remain cooled, courtesy the cooled glovebox. Then you get a total of nine bottle / cup holders, offering a great option to store bottles – a must have in our hot climate. The front doors have two bottle holders each, allowing one 1 liter and one 500 ml bottle in each door. In addition, there are bottle holders on each of the rear doors with the centre storage area also featuring three cup-holders. The centre console also has adequate space for mobile phones and iPods. 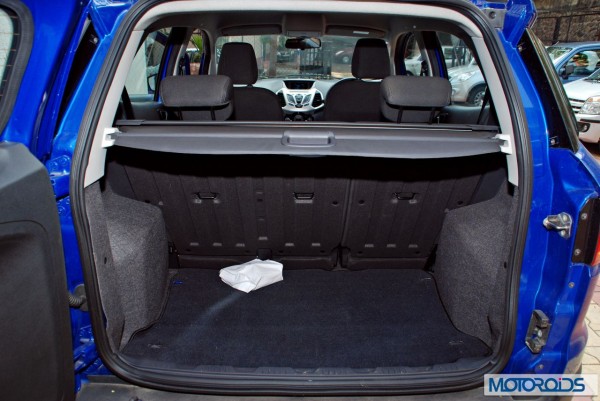 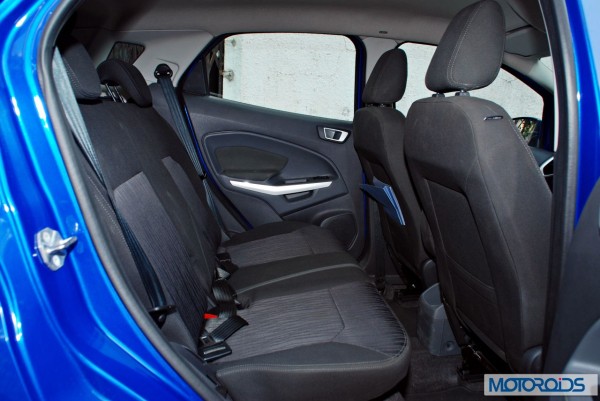 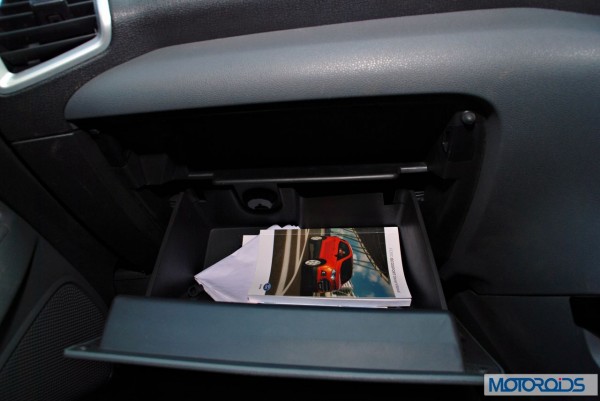 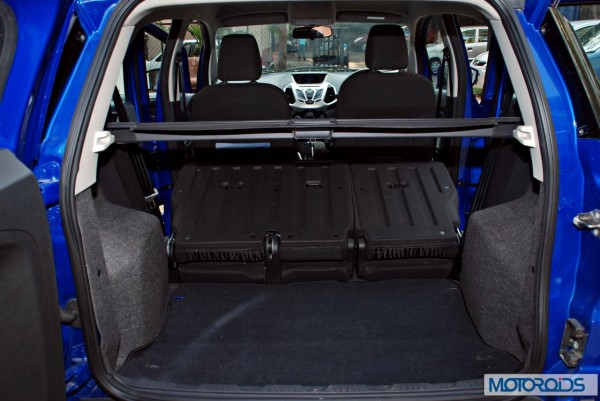 Other smart spaces include seatback pockets on both front seats that can hold a variety of articles. There’s a nifty under seat drawer on the passenger side as well for stowing away your expensive electronics from prying eyes. Ford has also very thoughtfully provided a small storage compartment next to the headlamp knob that comes in handy for storing toll bills and parking slips. 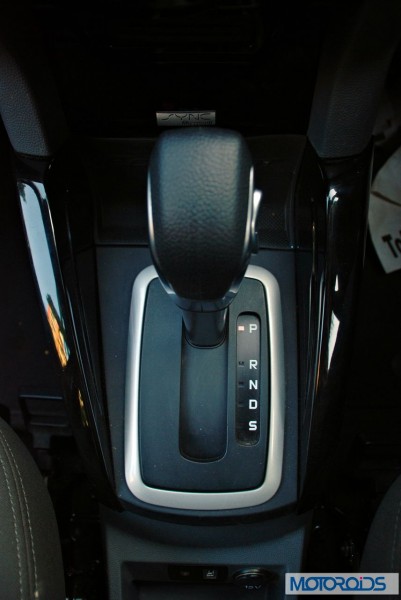 Some minor niggles apart, the Ecosport`s design has managed to create a strong demand and it continues to be popular. Specially draped in the Kinetic Blue and Mars Red, the Ecosport is an absolute head-turner. The funky interiors (though low on quality) may have been carried over from the Fiesta but still remain catchy for the first timers. With a near 9 lakh price tag, the 1.5 Powershift offers the image of an SUV, brilliant convenience of an automatic and manageable fuel economy. Like any auto enthusiasts, our heart wanders towards the 1.5 TDCi in the Titanium (O) trim which rates higher on driving pleasure and economy parameters. However, when it comes to convenience and tech, there is hardly any other automatic which comes close to the Ecosport 1.5 TiVCT automatic. It’s a compelling option for all automatic buyers to look at before making the final choice. 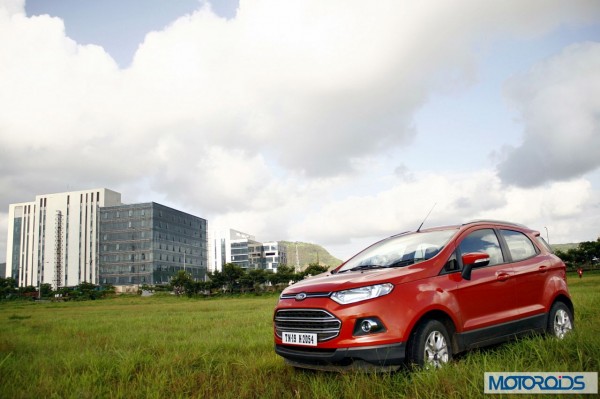 Next Page for Image Gallery>>>>