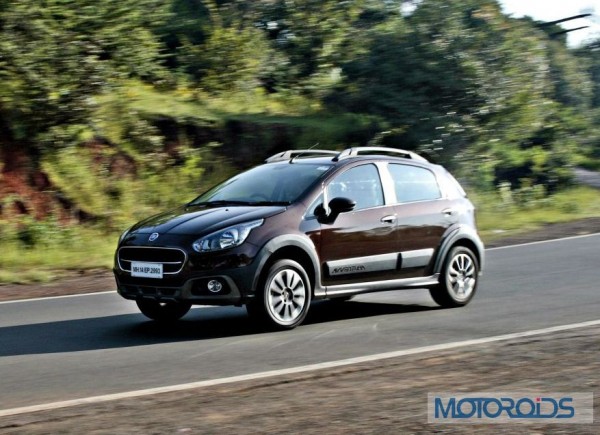 As the small turbocharger whistled cleanly through the pure, early morning, mountainous Panchghani air, the Fiat Avventura mauled the twisty sections with a kind of aplomb that can be solely be attributed to its Punto roots. Yeah, I was having some unbridled fun.

It all started with the Fiat guys arranging a blast from Mumbai to Panchghani in their brand new, glistening Fiat Avventura cars, something that Fiat likes to call a Contemporary Urban Vehicle (CUV) – an India specific product for now, but will be lined up for exports later in the day. 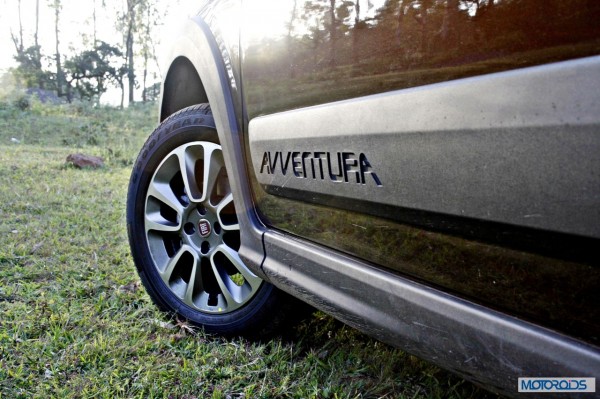 The Avventura has risen forth from pent up demand for a vehicle that young, nuclear families could have a little fun in – more of a quiet, yet involving weekend away from the urban sprawls, with the kids and a couple of bikes in tow. Heavily based on the Punto Evo, The Avventura is Fiat’s take on something on the lines of Ford Ecosport. But is it merely one more hatchback that aspires to be a SUV? Or even a soft-roader? We find out! 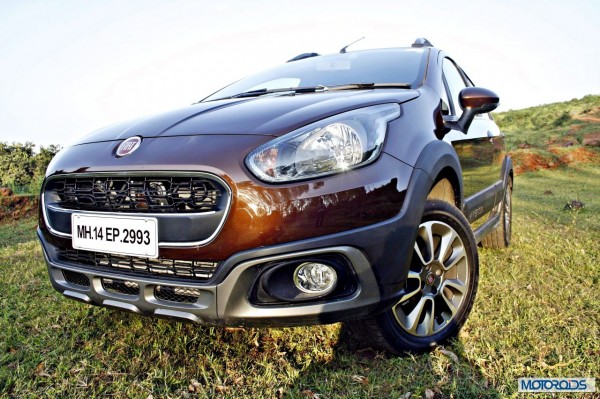 The Avventura does grab a few inquisitive eyeballs, what with its lustrous new paint work- especially in Bronzo Tan, beefy cladding, slightly raised ride height and that rear mounted spare wheel. Strictly from a visual standpoint, it’s a Punto Evo on stilts. Quite a generic statement that, but all those adventurous exterior embellishments give it a distinctive character- something that stands out in this day of cars styled with washing machines as benchmarks. 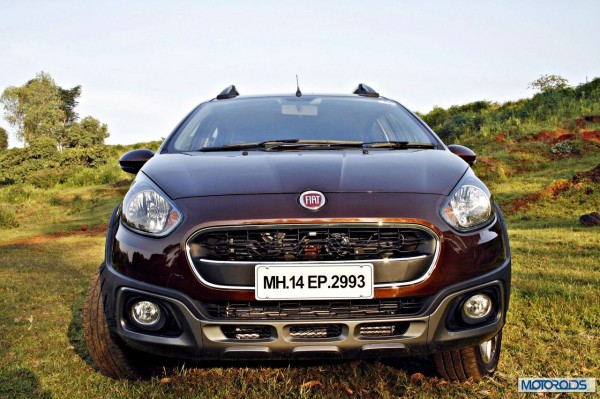 The bumpers get a little aggressive and the front one ends in a pseudo rugged flourish with a skid plate and side moldings which encompass the fog lamps. Even the rear one sports similar moldings, but also bears the beefy hinge of the external spare wheel mount. The sides benefit from some cleanly put together cladding work as well, replete with Avventura lettering stamped on them. The raised ride height does pack a mild visual punch, especially when complimented with the new, brawny set of five-spoke, gunmetal finished 16” alloys and a pair of bolted, fully functional roof rails above. 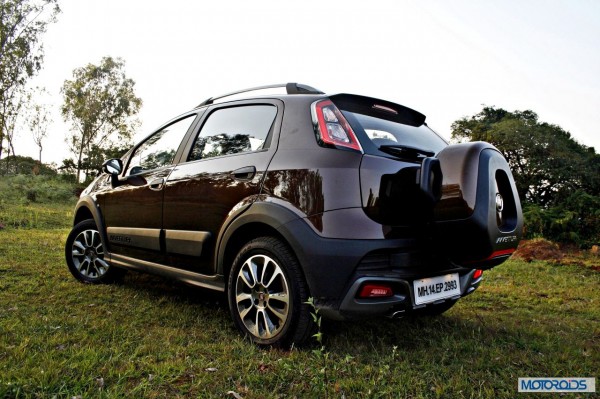 The rest of the bodywork is typical Punto Evo fare, starting with the new chrome lipped trapezoidal grille upfront with mesh inserts and those sexy, swept back headlamps bearing extended brows. The side profile continues to be the same, and has already melted tons of hearts, but the rear now offers something new in the form of a full sized, independently mounted spare wheel- which also comes with attractively sculpted cover with the Fiat logo in the middle. Those pretty, clear lens tail lamps from the Punto Evo are carried over as well. 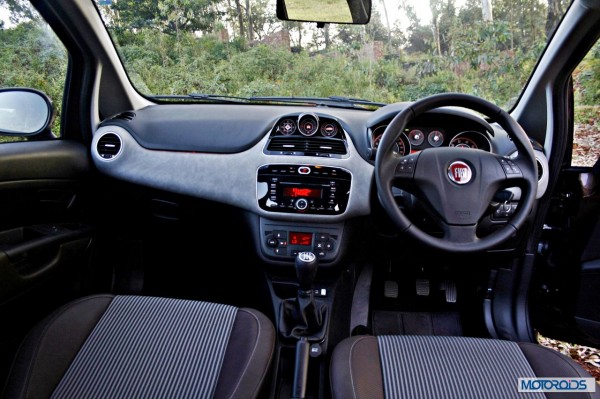 Step, or rather climb in and you’ll be greeted with familiar vibes here as well. The beautifully designed and put together dashboard and center console from the Punto Evo smacks you in the face but is now topped off with something unique. In a bid to capture its wanderlust, the Fiat guys have thrown in a set of three dials perched above the center console that display information like pitch, yaw and a even a compass – pointless, maybe, but looks cool, so might as well.  The dashboard also sports a soft touch suede element running across its entire length – a brilliant little visual touch, we’d say. The rest stays similar to the Punto Evo, along with the center console with its glossy black finish and a set of dummy buttons. The seats are trimmed in chocolate brown, similar to the door mounted arm rests and feature prominent Avventura lettering. Red ambient lighting in the top variant freshens things up inside as well. 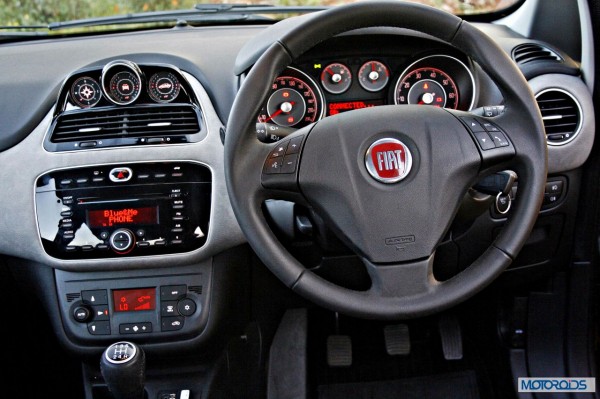 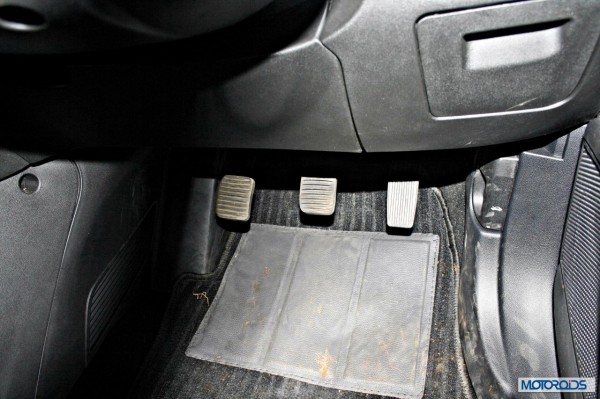 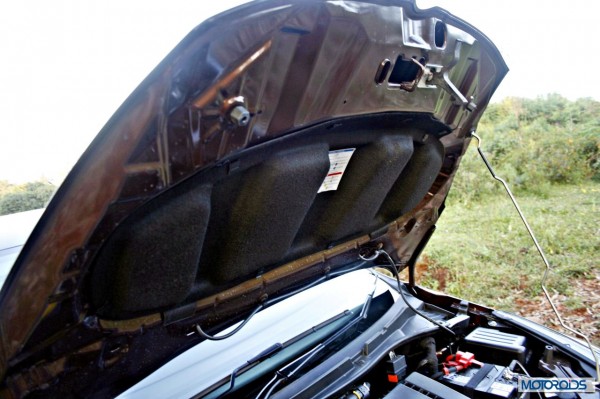 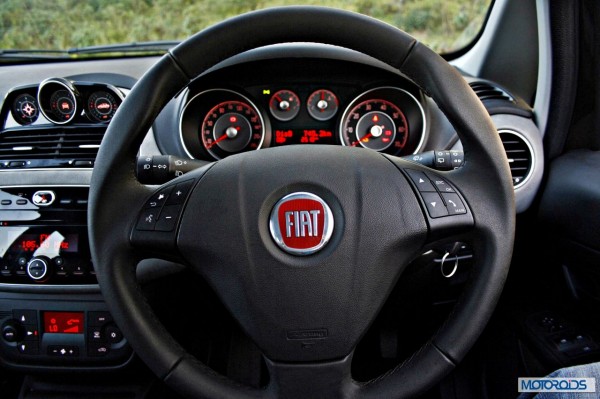 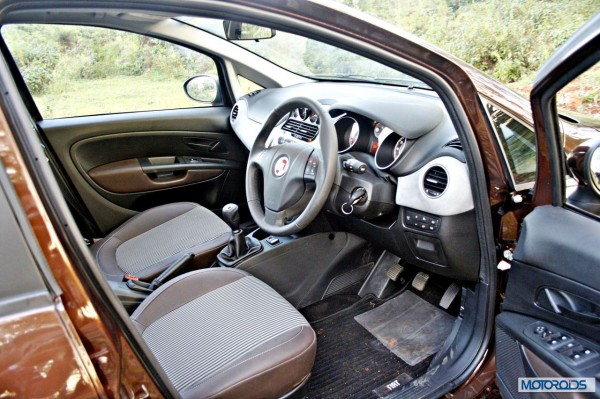 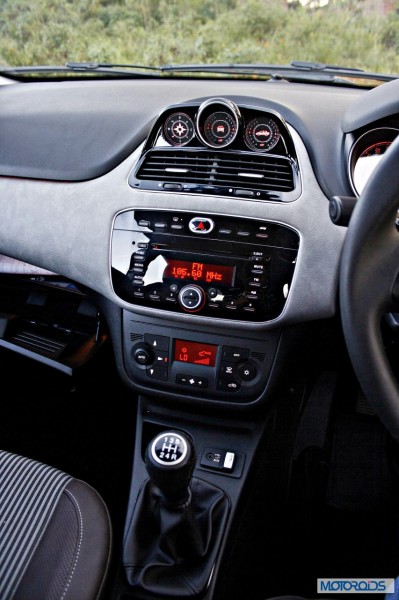 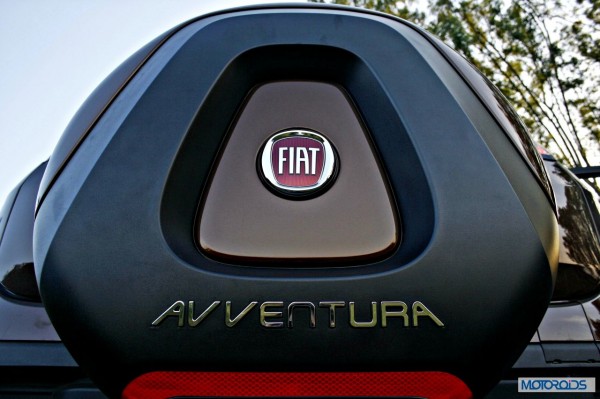 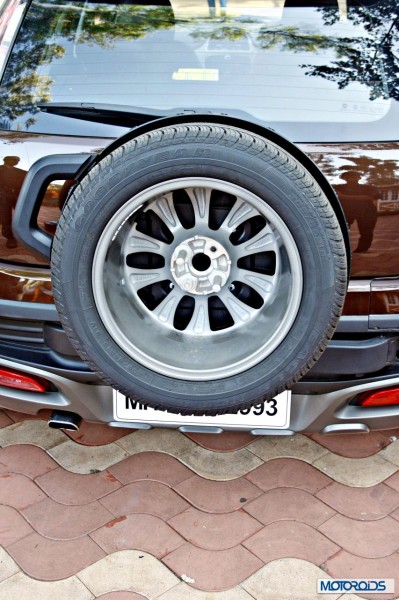 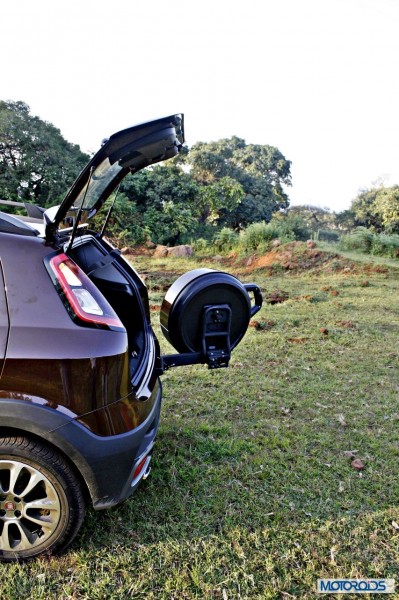 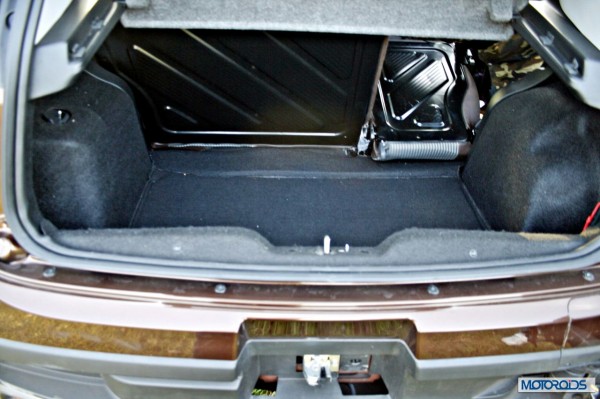 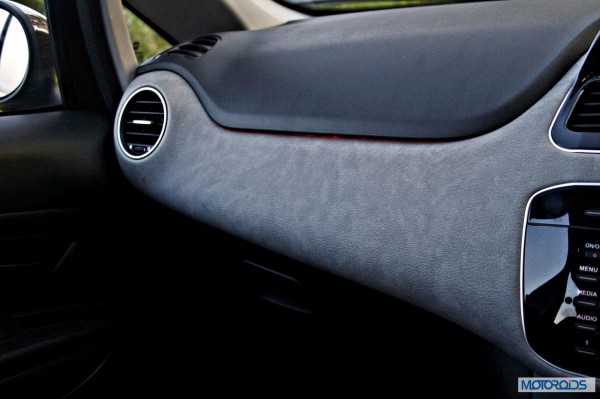 >>Next Page for Features/Engines & Performance>> 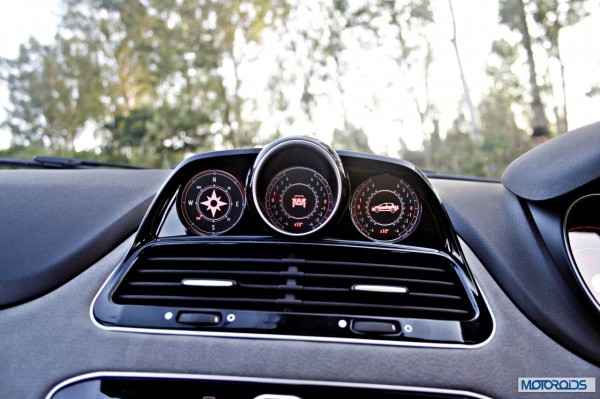 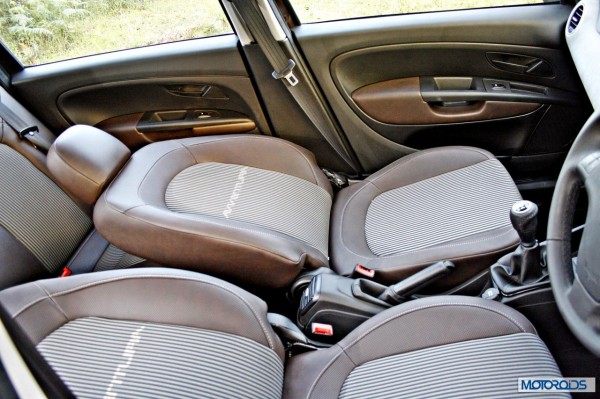 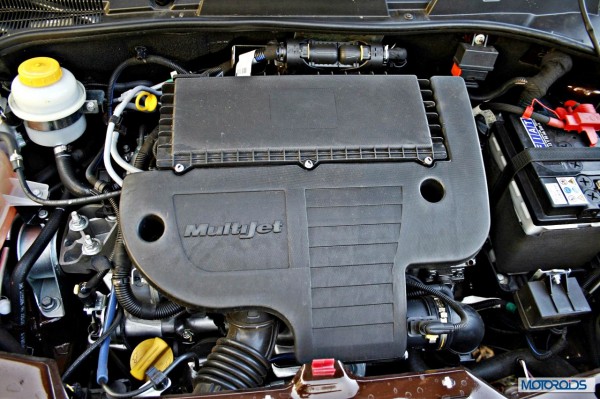 The Fiat Avventura will come with a couple of engine options, both plucked from the Punto Evo range and those are the 1.4 litre FIRE petrol motor, and the 1.3MJD with VGT. The 1.4 petrol engine produces 90PS@6000rpm and 115Nm@4500rpm. The 1.3 MJD with variable geometry turbo produces 90PS and 209Nm of torque. 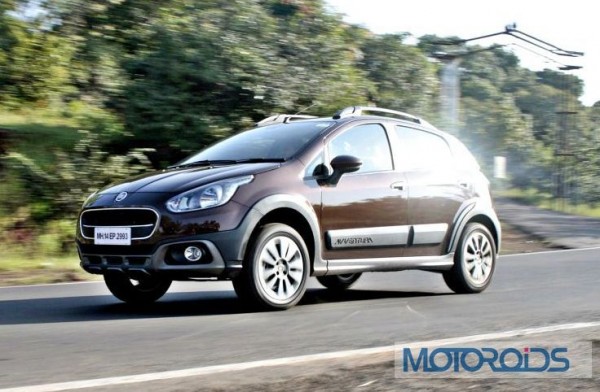 Straightaway we took off in the diesel, putting our foot down and let that VGT induced swagger lull us into not believing that the Avventura has to lug around 65 Kgs of extra weight over the Punto Evo. That said, it does affect the performance a tad, especially in lower revs with a fully loaded car. Below 2,500rpm, it doesn’t move very enthusiastically, but post that, push comes to shove when the VGT kicks in. It’s not exactly a kick, but more of a linear surge that feeds the senses pretty well. There’s a fair bit of torque to play with and third and fourth gears are a joy to row on the highway as speeds build. Dial in the newfound NVH levels and the Avventuta gobbles up the miles effortlessly. Also, the engine note is quite pleasing for something which sips diesel and never felt intrusive at all. The clutch action is pretty sweet and is on the lighter side- which makes for a effortless city slicker as well, if you get used to the slightly sluggish power delivery in lower revs 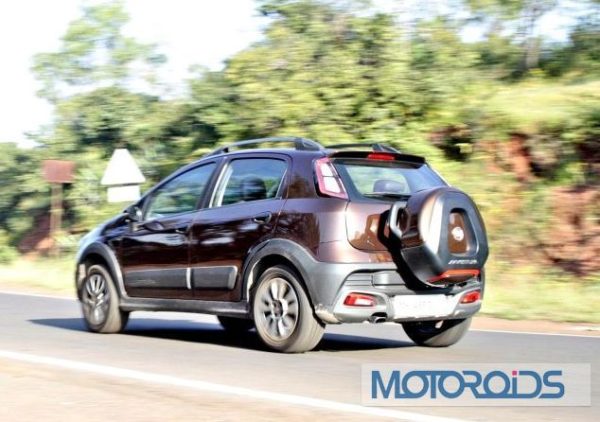 The 1.4 liter petrol motor is a pretty smooth operator too. It’s fairly spirited when it comes into its own, but not that fast or high-revving- the limiter cuts in at 6500rpm. Spirited take-offs are marred by the unenthusiastic character of the engine which sounds pretty gruff and uncomfortable in lower gears. Mid-range is strong enough for relatively fast blasts on the expressway, but don’t be surprised if lesser endowed cars nudge past you. We recommend the diesel- in fact; as mentioned before, Fiat isn’t even offering a top-end variant for the petrol range, which ends with the middle Dynamic variant. 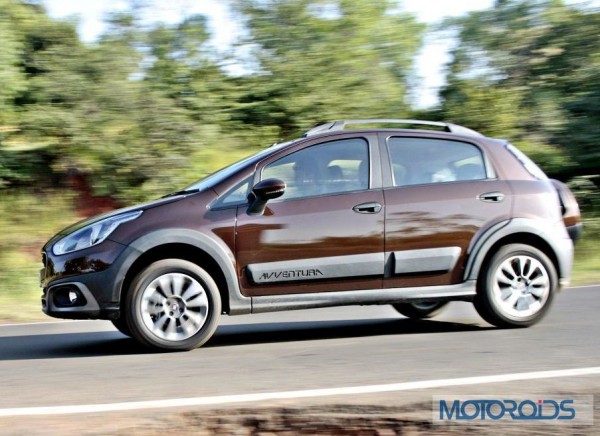 The Duster ahead stopped in frenzy, brake lights glowing and kicking up a lot of dust. The road ahead was festooned with potholes with sizes ranging from snake holes to full-sized craters. The Avventura showed no signs of slowing down and hit the bad patch at barely legal speeds. What happened after that just blew our minds away. This Punto Evo on stilts simply sailed over them, with just muffled thuds finding its way inside the cabin- the car was immensely composed and simply devoured the potholes and whatever was left of that road, leaving behind the Duster in a stupefying haze of dust and the sound of an ever- vibrating tail mounted spare wheel- like a BOSS! Just for the record, the Duster, by itself is a fantastic tool when it comes to flattening uneven surfaces. Yes, the Avventura is that good! 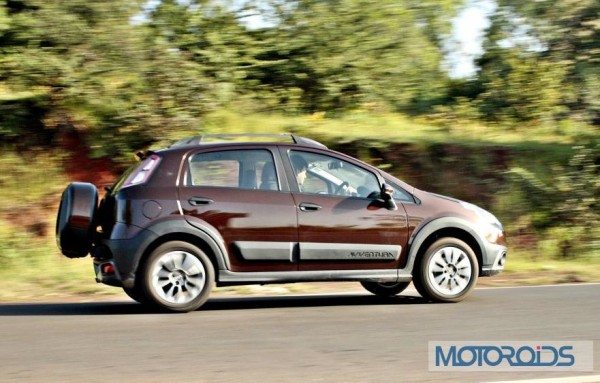 The way this car handles bad patches of road at speeds is something that nobody expected- it literally flies over them without breaking a sweat, over and over again. Well, even the Punto does the same, but this one takes things to an entirely new level. While the raised ground clearance now stands at 205mm and the suspension receives mild tweaking, the new set of 205/55 R16 tubeless rubber offers oodles of grip and composure. Even on smooth tarmac, the Avventura rides brilliantly and offers excellent high-speed stability, no major issues here. Oh, and the steering tends to light up a little and shows slight disconnect on the limit in a straight line. 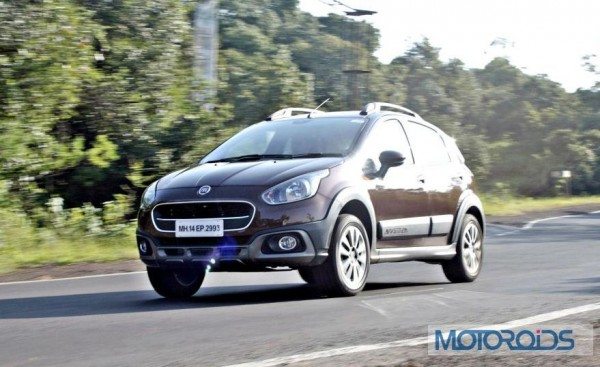 When handling the twisty stuff, very few cars came close to the Punto, and this follows a close second. There’s a wee bit more body roll than a stock Punto, but that’s understandable because of the raised ride height. Apart from that, it’s a pleasure to pilot around, with the hydraulic power steering weighing up nicely and offering just the right amount of feedback. And it still corners like its on rails- very predictable and immensely enjoyable. 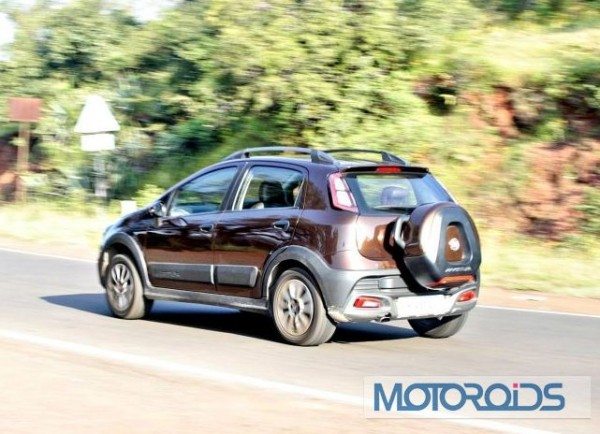 The petrol has a slightly different story and doesn’t feel that composed and firmly damped when the going gets rough. Though not poles apart, the lighter of the variants here feels a little less confidence inspiring over broken bits of road. Dynamically though, it continues to be as brilliant as ever! 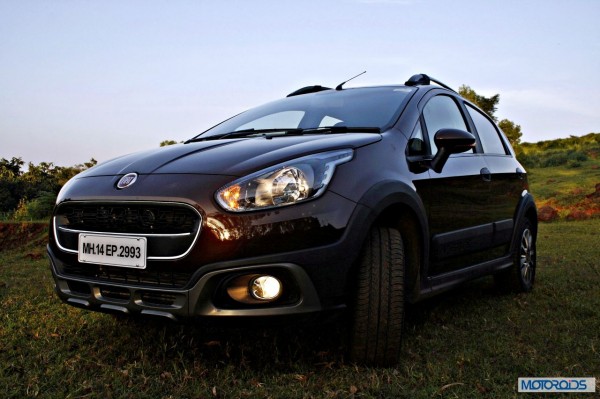 To get to the point, the Fiat Avventura is a lot more than what one may think of it – a Punto Evo on stilts. It certainly looks the part, clearly the best amongst its competitors with hatchback origins, which include the hideous Etios Cross and the Cross Polo. The dynamics and performance are easily a cut above the rest as well, barring the Cross Polo, which comes pretty close. The pseudo-rugged Fiat packs in a fair amount of features but doesn’t have the lead in the department, what with no reverse camera or even sensors. Minor quirks aside, it’s a neatly  put together vehicle. And oh! It goes over bad roads like no other. 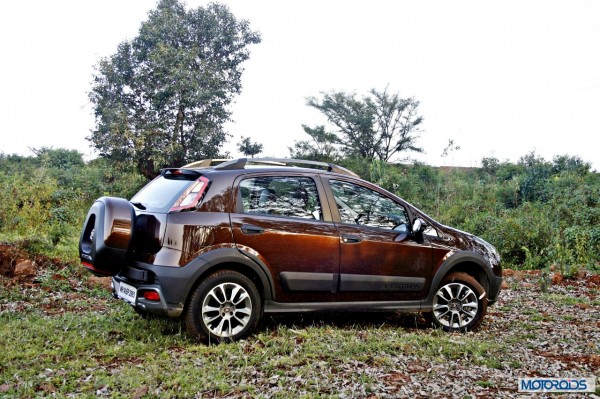 Is it better than the Punto Evo?

It depends on how you look at it. For what it’s meant for, it certainly is. It’s highly impressive rough road credo is achieved without sacrificing the Punto’s class leading dynamics and to us, it does look marginally better. Agreed, it’s no real off-roader, but it was never meant to be. All that extra show is justified by the way this thing flies over broken Indian roads. In fact, this could be the perfect Punto. Prices are yet to be disclosed, and the world awaits its global debut on the 20th October in Delhi.

>>Next Page for Specification Sheet/Gallery>>