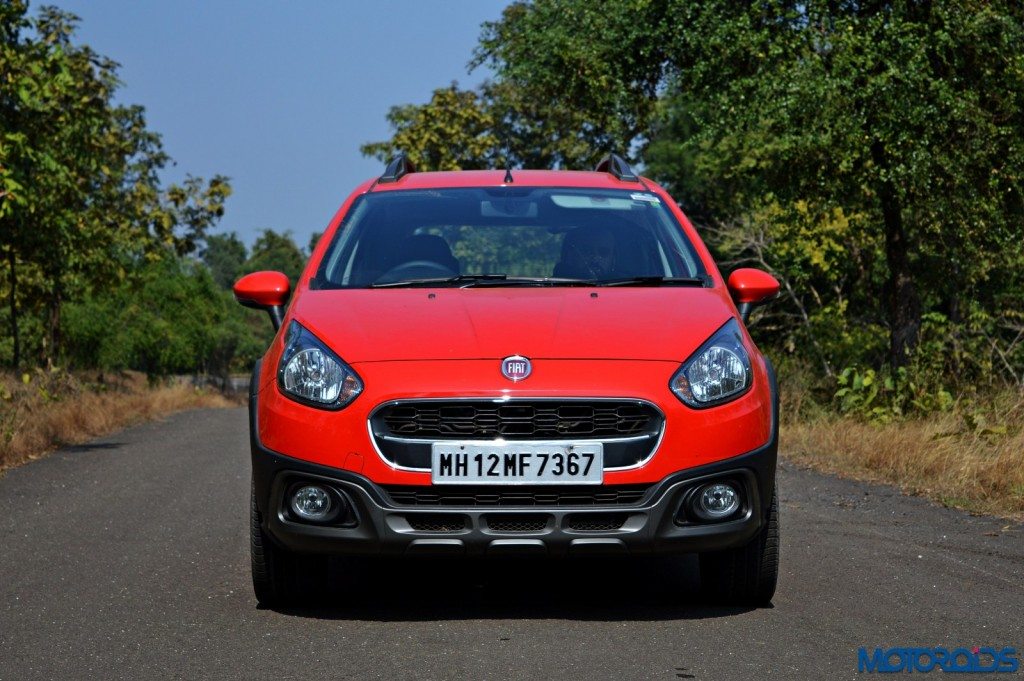 A scorpion on the bodywork of your car is a much sought after thing, we can tell you that. Another car, about half the size of the one on this page, costs three times more – so that badge’s desirability is not a matter of debate. The Fiat Avventura Powered by Abarth (yeah, that’s the full name), then, is desirable; and at Rs 10 lakh ex-showroom, affordable too. It isn’t a proper blue-blooded, thoroughbred Abarth, though, with more than just a tinge of cost-conscious dilution in design details and execution. However, with its 1.4 liter turbo-charged engine and all of 140 horses there’s no questioning its vigour and virility. We wouldn’t, however, be convinced until we give it a thorough thrashing, so we decided to raid the scenic surroundings of Tansa and Vaitarna lakes near Mumbai with the crossover that boasts a sting in its tail.

How do I tell if it’s a scorpion stung Avventura? 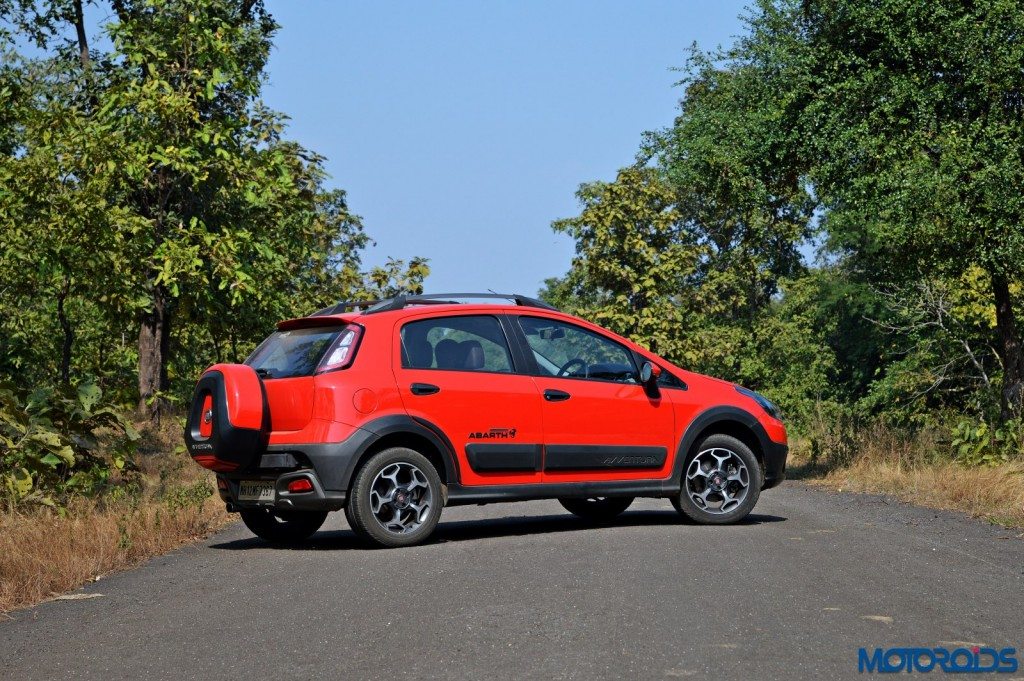 You really won’t have to look hard, just ensure that you’re looking at the sides. Up front and at the rear, there isn’t really anything that gives it away. On the flanks, though, those beautifully styled 16 inch alloy wheels with ‘scorpion tail’ spokes declare this crossover’s poisonous intent in the most emphatic way possible. The size of the tyres is the same as the stock Avventura, though, and stands at 205 / 55.

Read: In-depth review of the Avventura for all the interior and exterior details 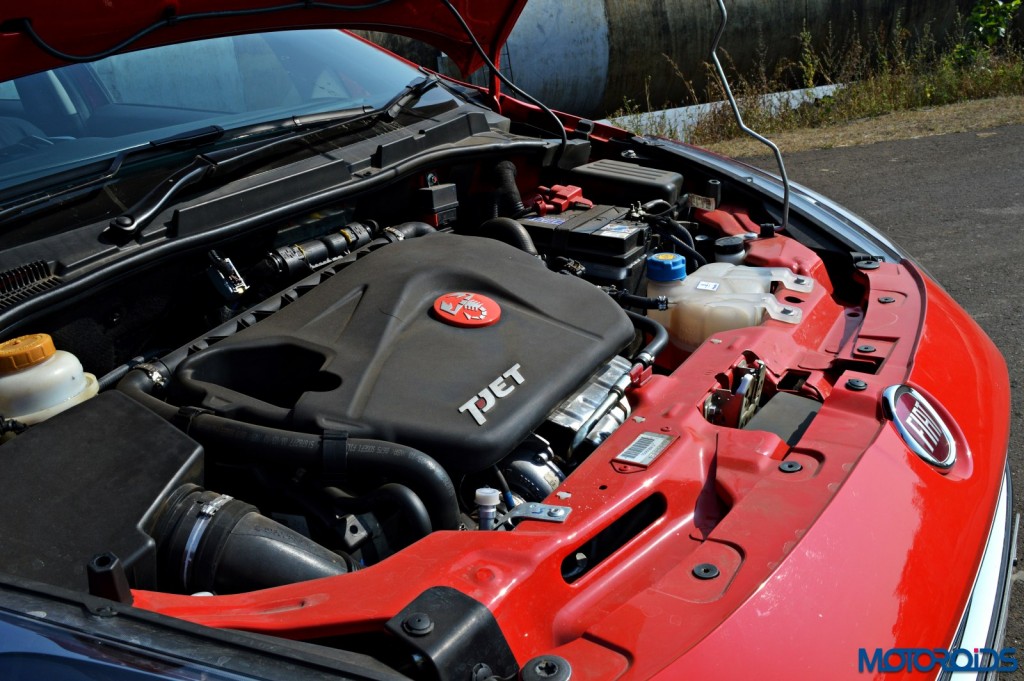 There’s also the obligatory Scorpion motif accompanied with a ‘Powered by Abarth’ badging on the rear door. There’s isn’t much else to tell, unless you pop open the bonnet to find the poisonous little creature in silver, circled in red, crawling on the engine cover.

What are the changes inside?

Zero, zilch, nada! The Interior of the Avventura Abarth is identical to its un-stung sibling. You get the unique Alcantara-finish fake leather trim on the dashboard, Blue & Me assisted voice commands, generous space, wide, plush seats with ample thigh support and a unique central triple pod set over the centre console that lets you know the direction you’re headed in, along with the pitch and yaw angle of the vehicle. 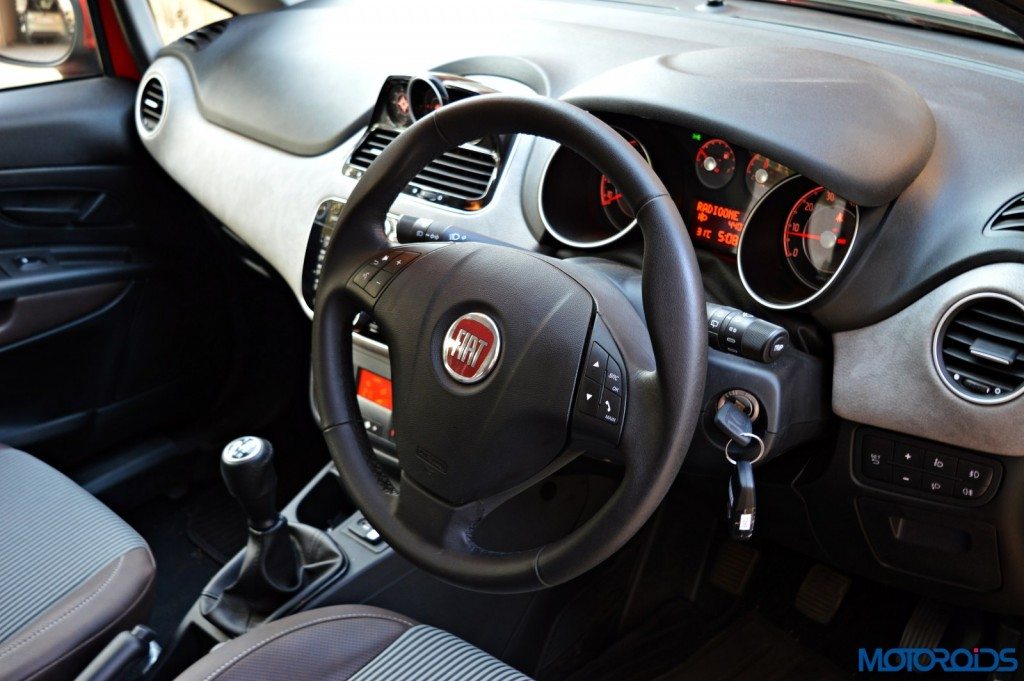 Fit finish and material quality is average, though the machine feels like it’s built to last forever. No creaks, no squeaks – just a solid, rugged feel as you hold that steering wheel and look over those retro styled red-backlit instruments. 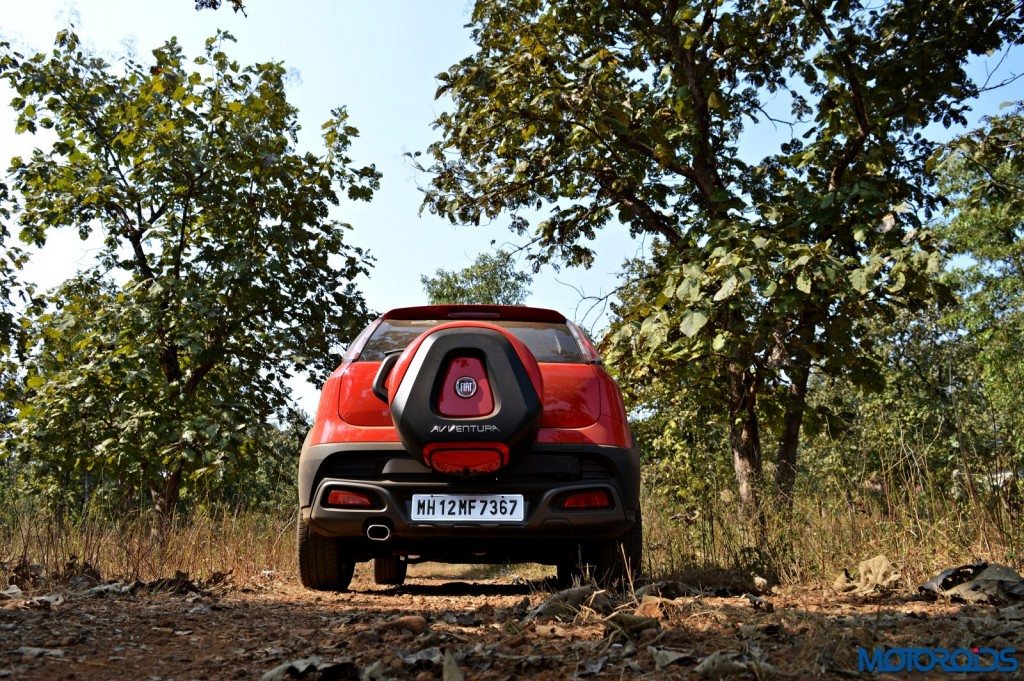 That engine must be a hoot though?

Sure as hell, it is. Thumping vigorously under the Avventura Abarth’s bonnet is a 1.4-liter VGI turbo charged petrol engine, which is smooth, revvy and punchy – all at the same time. Power is rated at 140 bhp @ 5500 RPM while the peak torque, thanks to a turbo configuration is an even more impressive 210 Nm @ 2000 RPM. 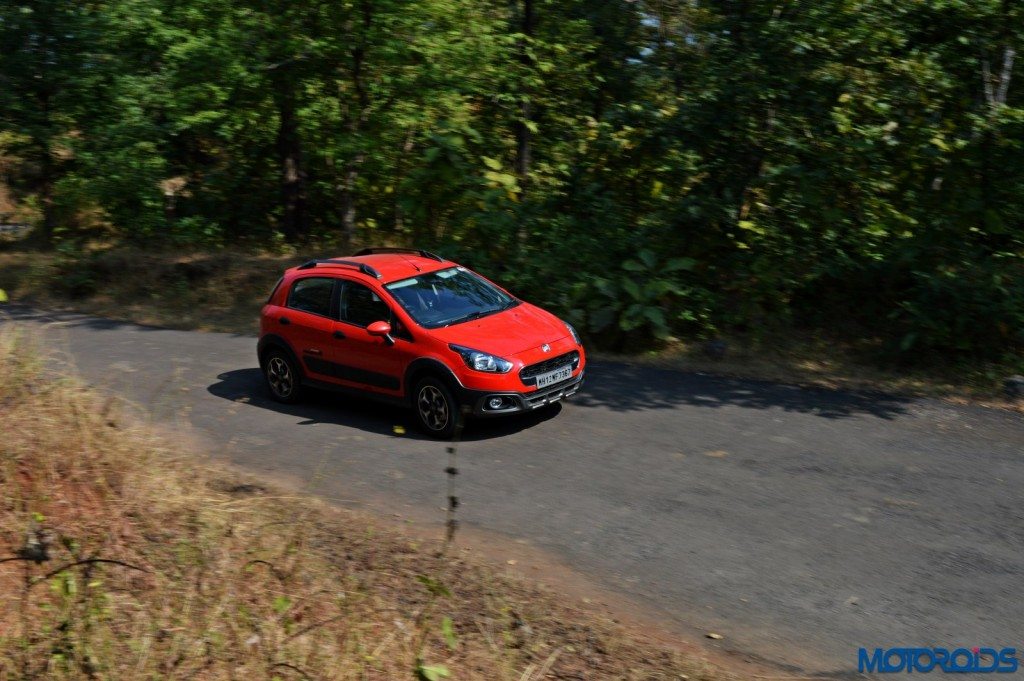 Twist the key, slot the ‘box in first gear and even the slightest amount of lead in the right toe leads to the driven front wheels making those Good Year Eagle NCT 5 tyres break traction. The steering twirls mildly, hinting at torque steer, warning you sufficiently about the hooligan that’s just begun its mischief.  With some help from that slightly lacking footwear, the Abarth will break traction without much effort, even in the lower revs in shorter gears. Don’t complain later if you screw up, as you’d have been warned well in advance to handle this one with respect even before slotting into the second cog. 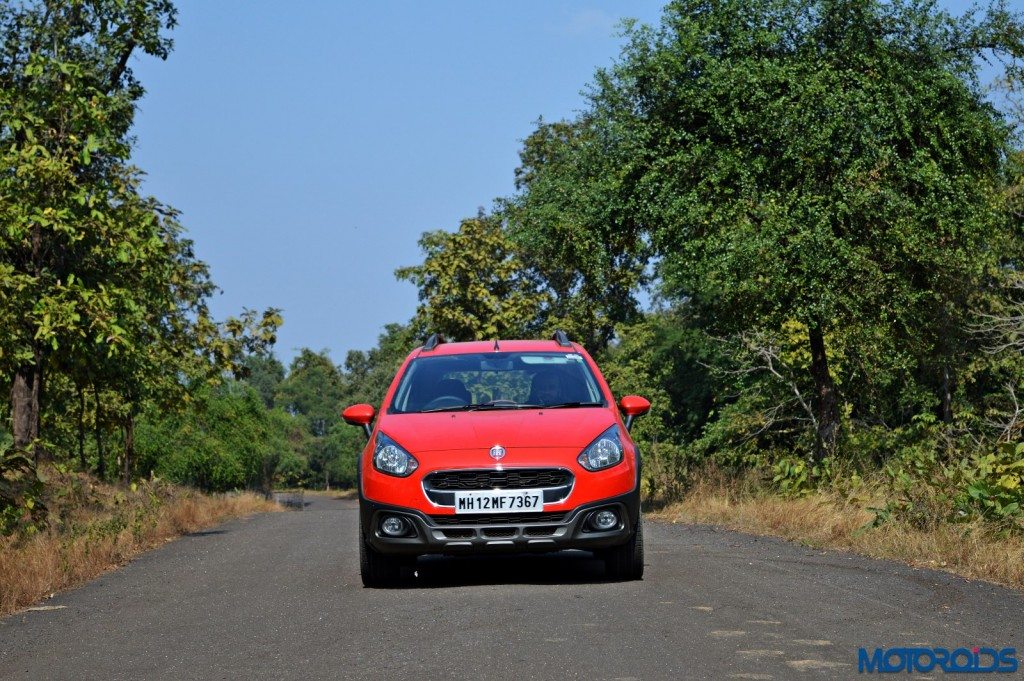 On the move, within the city confines, the Avventura Abarth feels like an everyday car with a smooth, tractable and quiet engine. This one doesn’t have any raucous, throaty or burbly notes in its vocal cords.  There sure is some turbo lag to be experienced, but the engine is responsive, and does move with reasonable keenness even below 2000 rpm, the point where the turbo spools up properly. 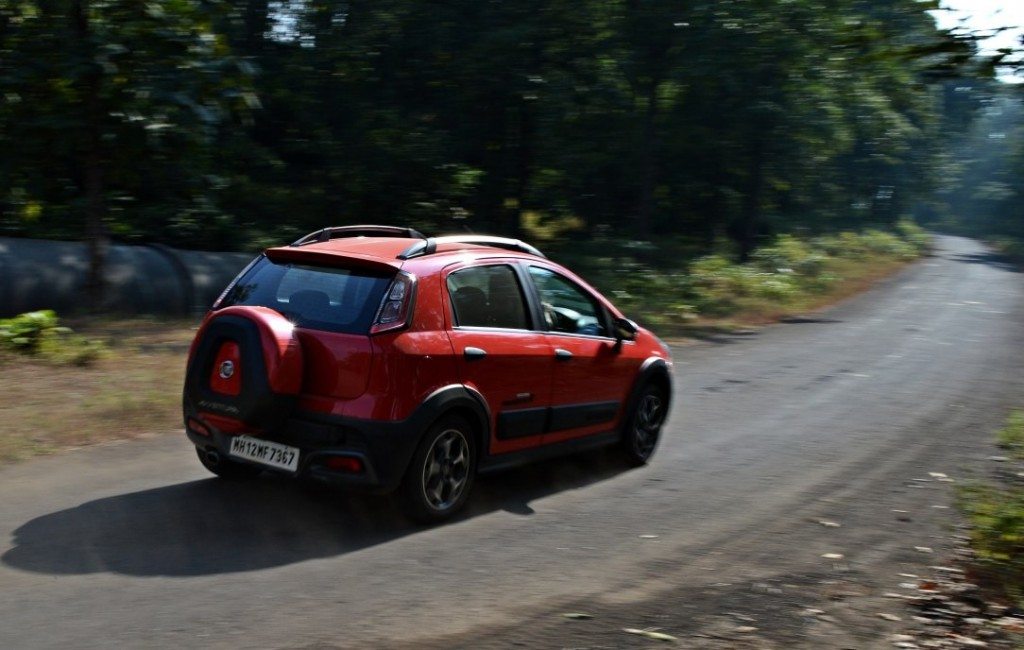 Quiet and inoffensive below the 2000 rpm mark, the motor grows a pair of fangs as the needle sweeps the first three quarters on the tacho marked till 7000 clicks. As the doings of that punchy turbo motor get laid down onto the tar, you get shoved back into your seat’s backrest in a properly enjoyable manner. Thereon, the weather becomes cool, spring arrives, the sunshine feels pleasant and the world generally becomes a much better place to be – all the way up to 6000 rpm. The power keeps building, with no hints of fade even in the upper echelons of engine speed – the Abarth accelerates with vigour through gears, looking thoroughly capable of breaching the 200km/h mark. Pound for pound, this is arguably the most potent, most likeable petrol motor this side of Rs 12 lakh. 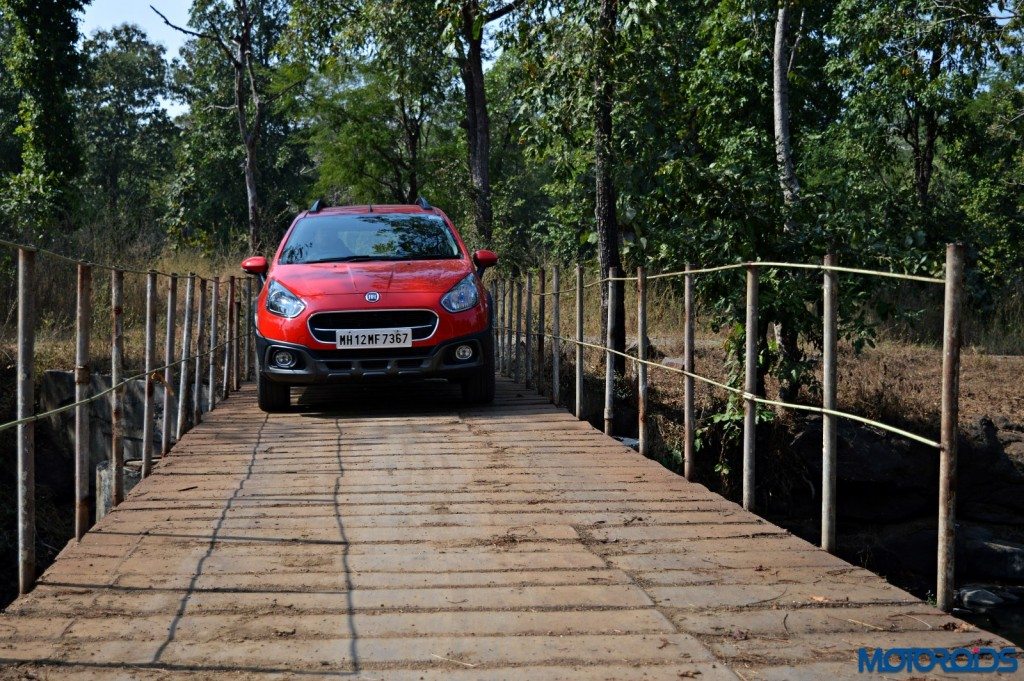 For an out an out enthusiast, it’s sad that there aren’t any aural pleasures to go with the sensual delights this crossover offers, though the trait lends the Avventura a balance that bodes well for everyday use.

The fifth gear is unusually tall, damping the addictive shove of the motor somewhat, but adding greatly to the capability of the crossover to cruise at high speeds without having to stress the engine too much, while also delivering commendable fuel efficiency.

The transmission doesn’t complement the delectable engine well enough though, with some degree of rubberiness and clunk that somewhat dilutes the stimulating experience. Despite that little quirk, the powertrain on this vehicle is the best you could get for that kind of money.

Though not a honed ballerina, the Avventura can sure shake a leg on a Bollywood number and titillate your senses to leave you in a refreshed, if not a transcendental state. I’ll be honest here, switching over from a properly taut, sturdy German machine even in the sub-10 lakh rupee segment would make you feel a bit awkward in the Avventura. The overall layout, once seated, radiates a feeling of some disconnect, which is hard to explain. You wouldn’t hop in, twist the key and shoot off with this one. The increased ride height with a ground clearance of 205mm does take the connected feel away from the setup, at least at the outset. Work the height adjustable seat (with the lever odiously brushing with the seat cushion), which is akin to a plush sofa along with some adjustments to the rake adjustable steering and you’ll start feeling a bit better. We do wish those seats hugged the front passengers a bit more tightly, though. 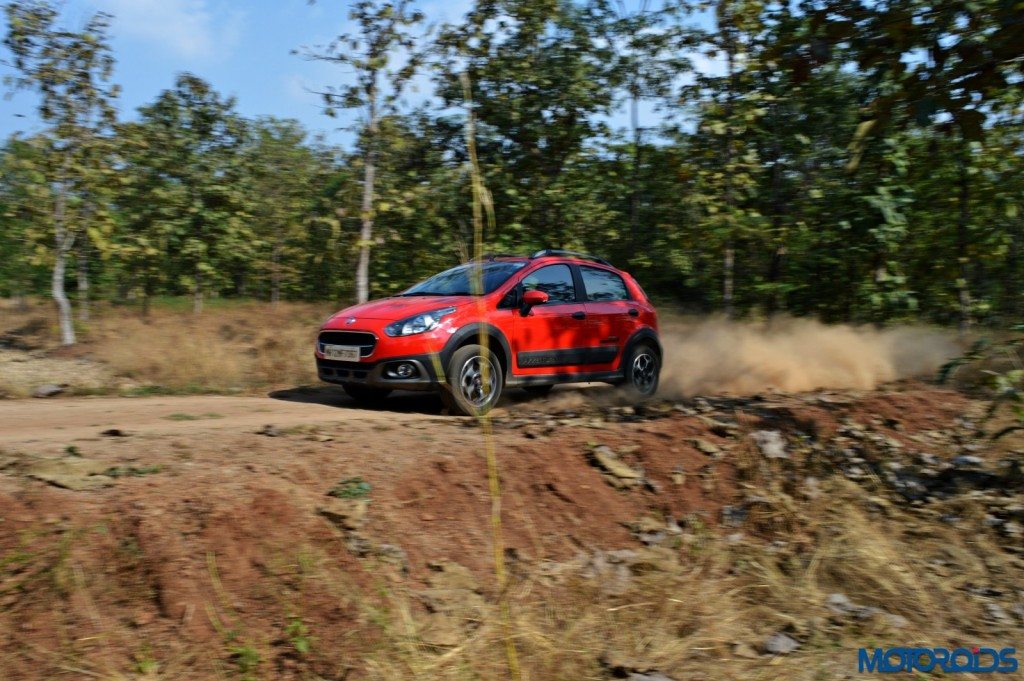 Working that underwhelming gearbox and experiencing that unwelcome torque steer at the very outset isn’t a particularly pleasurable experience either. Trundle out of your building’s parking lot, and the Avventura pokes you for attention by dismissing those rubberized speed bumps with disdain – your everyday hatch gets a thorough jiggle while dealing with them, by the way. The ride quality, at all speeds commands admiration, and along with that high ground clearance, makes the Avventura Abarth a fairly capable machine to venture off the blacktop – as portrayed by some of the images in this page.  We actually ventured into the jungle for a few kilometres in an unsuccessful attempt to make the crossover pose against the pristine Tansa waters, and the Avventura took the rugged terrain in its stride without a whimper. 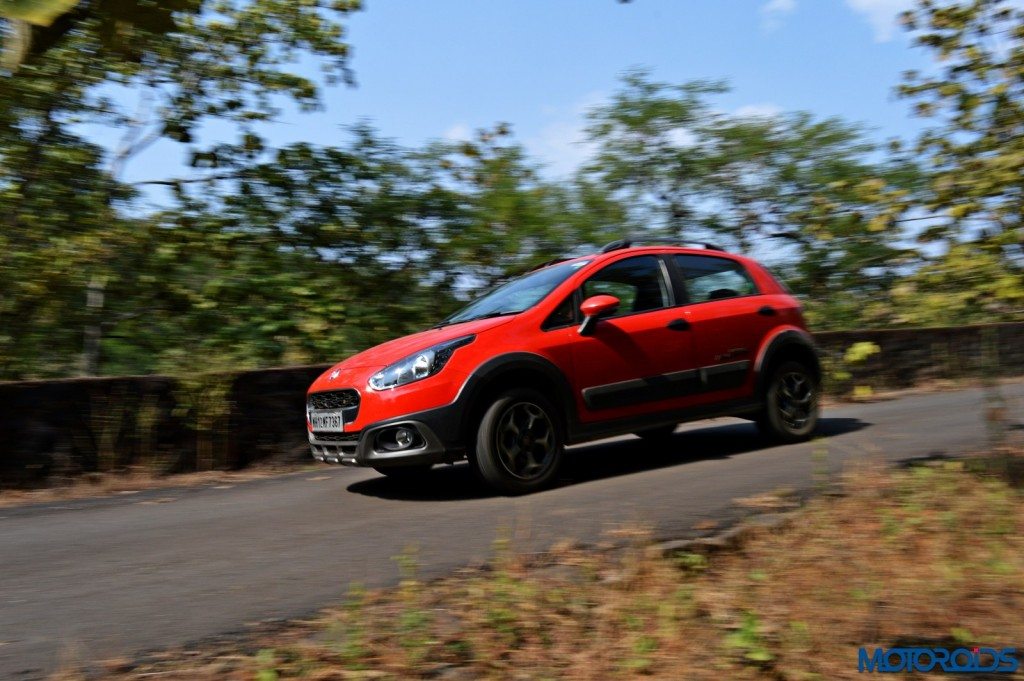 Back on the tar, the wired feel of the Punto is somewhat missing here, but a few kilometres into the drive, a few bouts of hard braking, a few enthusiastic twirls of the wheel, and your inhibitions start dispersing. The hydraulic steering is enjoyably heavy and feelsome, the brakes with discs all around are solid and there is a tank-like feel to this machine that keeps instilling faith in you about its capabilities in a very linearly progressive manner. So while we started off with a bit of an apprehension, a 100 km later we were relentlessly attacking the nondescript, yet achingly beautiful windy roads of the hills surrounding the lakes that supply the life giving elixir to the mega metropolis called Mumbai.

Dynamically, it simply grows on you, the Avventura. It’s a blind date which may appear a bit coarse by her first appearance. Strike a conversation and she’d start entertaining you with her subtle humor that keeps getting ever so mildly dirty with every passing moment. You’d not realize when you’ve started disclosing your darkest fantasies to her, and you’d be a de facto idiot if you two don’t end up between the sheets for one of the most memorably exploratory, if not the wildest sensual experiences ever. 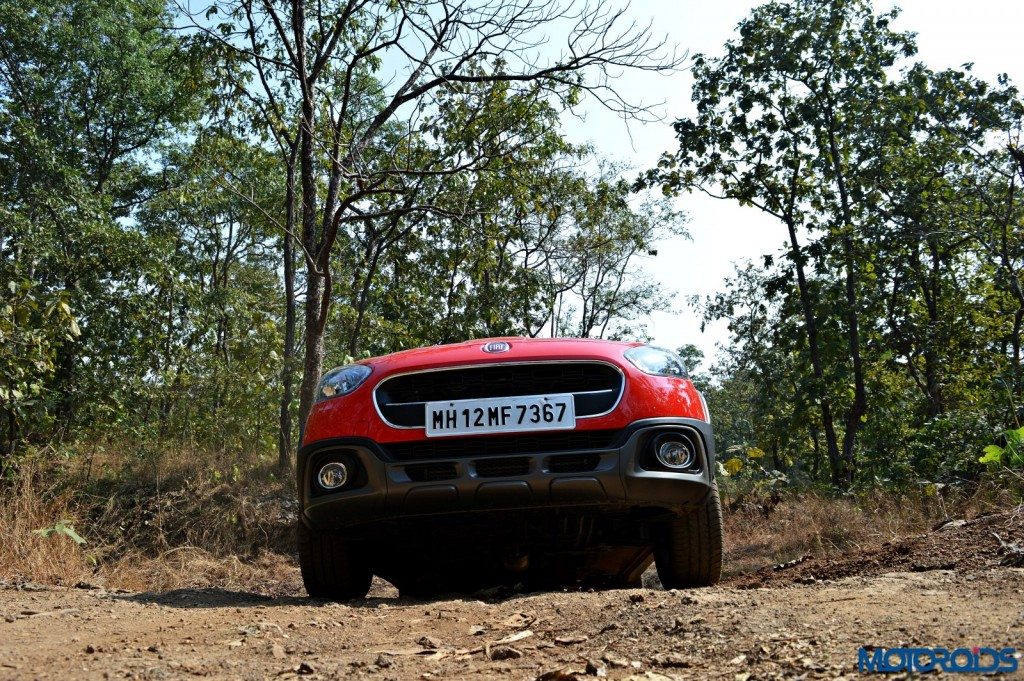 The Avventura takes on the highway with authority – its engine thoroughly capable across the range with a reassuring surge of torque lifting you up above the rest with a gentle dab on the right pedal. Attack the corners and the lively steering along with solid, old-school hardware delights the motoring aficionado with its honed, failsafe engineering. There sure is some degree of body roll, but it’s caged, locked and bound, and never really messes with the experience.

We wish there was more traction on those 205/55 tyres – with all that horses and twist, they start wailing as the adrenaline levels shoot up. 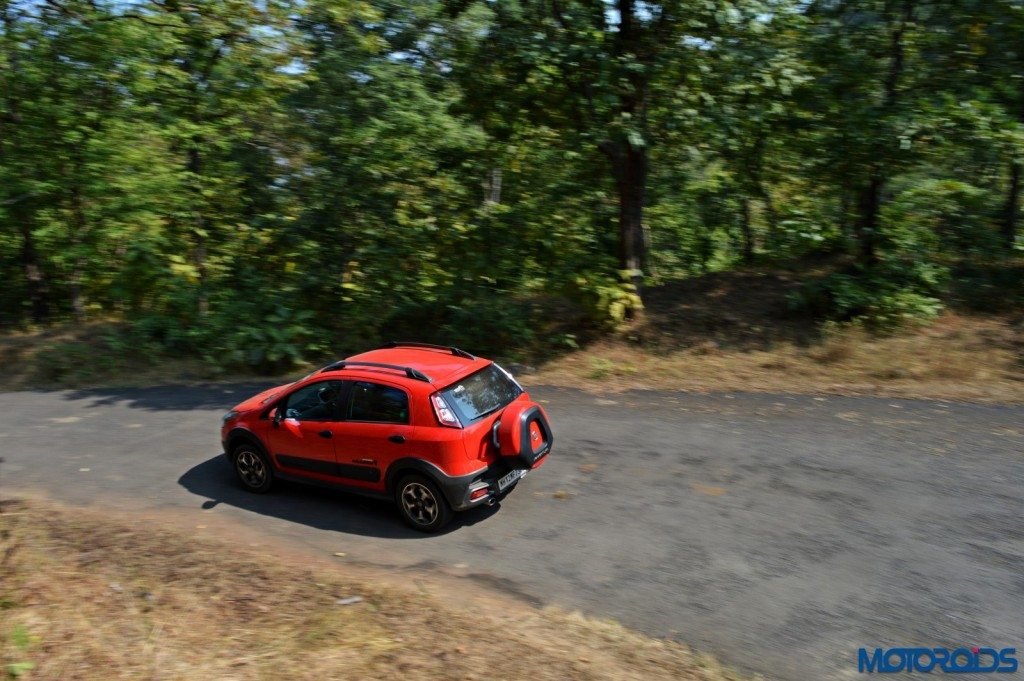 Big picture – the Avventura offers a unique blend of heady power and torque, go anywhere capability and admirable handling for the segment. It rides and drives quite unlike anything else, and we say that in a very, very positive way.

Probably not an apt question, but being an Indian, couldn’t resist asking – kitna deti hai?

It is, by all means a very pertinent question. The Abarth Avventura, even with all its performance isn’t as far-fetched or inaccessible as one may imagine. It’s an affordable enthusiasts’ car and for those who’d put their hard earned money on it, the efficiency most definitely would be a key parameter.

To start off, you can very conveniently dismiss that ARAI efficiency figure of 17 kmpl – it’s just not going to happen. However, after a day long drive that spanned 300 km, with loads of unrelentingly enthusiastic driving, we still managed to extract about 9 kmpl from the car. A more fuel conscious approach may have pushed that number to 13, but that’s pretty much the upper limit. Hope that answers your query.

From a powertain and mechanicals standpoint, the Avventura gives you precious little to point a finger at. The relative softness is inherent to a high clearance setup, and we believe the car could have done with a bit more tautness, but we really can’t complain about anything in particular as regards performance and handling.

Generally speaking, the cabin could most definitely have been executed better. It looks old, low on quality and isn’t the best finished either. Sound quality is nothing great to write home about and that triad of round pods on the dashboard look really cheap. The interior, in a nutshell, just isn’t there with the rest. But you wouldn’t be looking at this car if you cared about all that in the first place, would you? 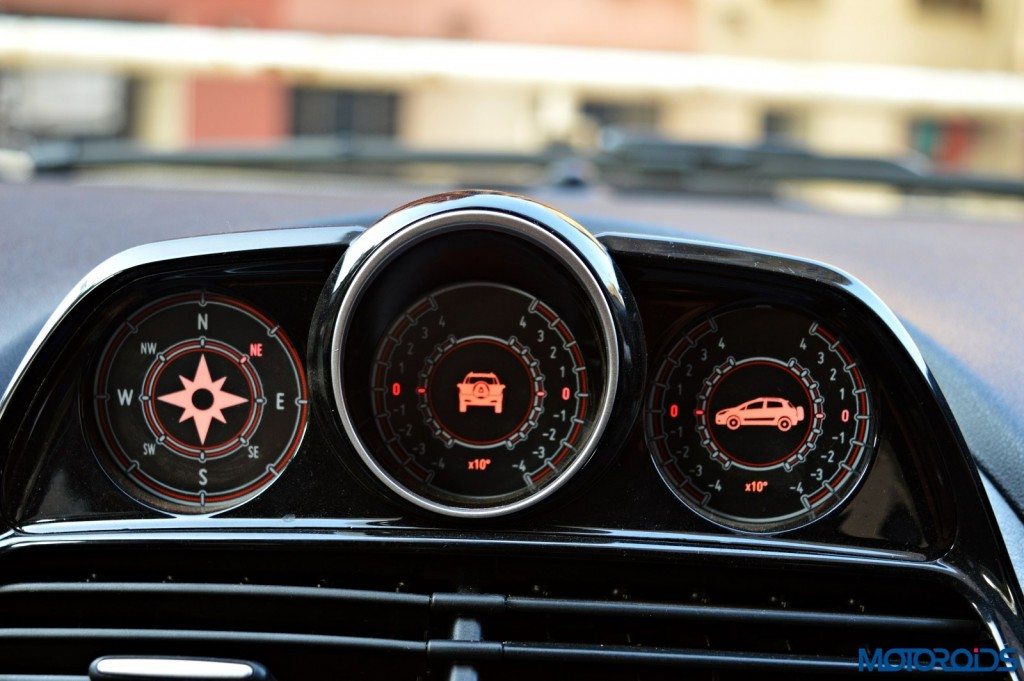 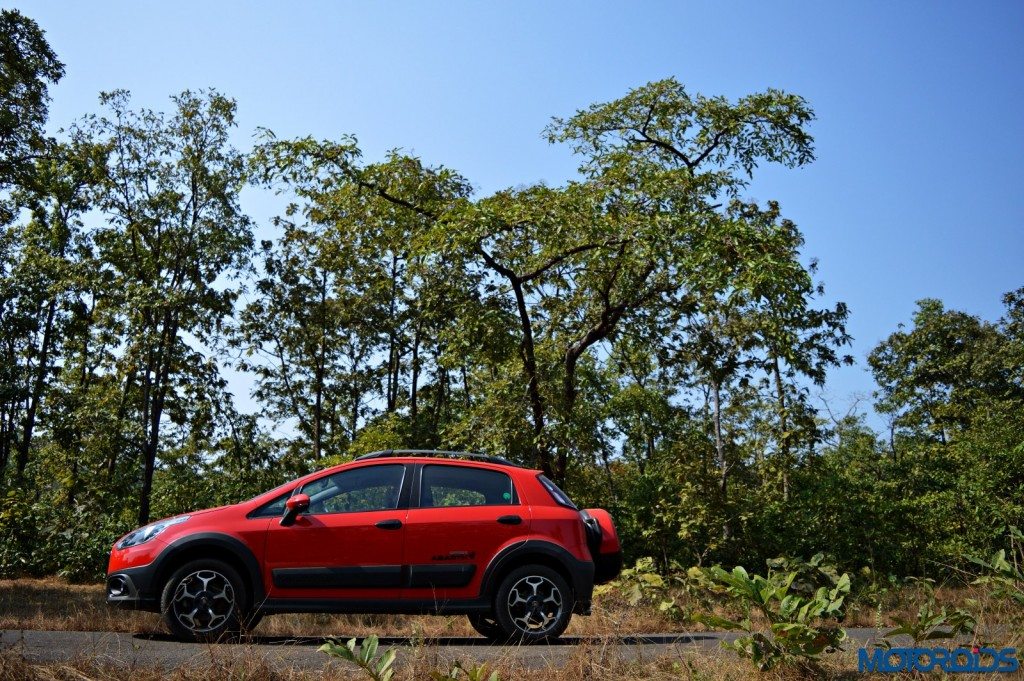 If a petrol-powered machine which is capable on the road and reasonably so off it is what you want, go for it. It’s a balmy aberration from a multitude of white goods we call cars these days. And did we tell you, it looks like a million bucks in that shade of reddish orange. It’s a capable on-road machine with an outdoorsy appeal, visual distinction and some capabilities off the beaten track. For pure on-road adrenaline rush, the Punto Abarth should be a better choice, though.