The engine characteristics of the Chevrolet Cruze, as we realized when we tested it the last time, really called for an auto transmission. Here is what we experienced when we took the baby out for a spin.

It was a Christmas Eve, and since it was already too late for Goa, we decided to head to Chiplun where we had the luxury of a farm house with the intoxicating Guhagar beach hardly 50 km away. Our ride for the destination was the Chevy Cruze – the newest luxury offering from GM India. With a 2.0 little common rail diesel putting out 150 horses and truckloads of torque, we were expecting a more than just a usual drive to our destination.

The Chevy Cruze represents the new face of GM that has emerged after the American firm’s downturn. In its revamped avatar the company believes more in technology, engineering and sustainability than just banking on those legendary GM and Chevy badges and those preposterous eight-litre gasoline engines. We have driven plenty of GM cars in the past and most of them invariably turn out to be a tad lagging when compared with their German and Japanese counterparts. The refinement, the solidity, the engineering prowess exhibited by the Oriental and Teutonic brands is often missing in Chevy badged machines. This gave us a reason to be a little sceptical about the new Cruze. However, we knew that the Cruze has been designed and engineered on a clean slate, so we decided to wipe off any brand-specific perceptions before we started the drive.

The first impressions as we approached the Cruz were more than just good. With its imposing form, a new face, and sculpted chiselled looks at the front and a prominent shoulder line, the Cruze looks big and substantial with commendable street presence. The roofline swoops down towards the end to lend the Cruze the sporty stance that is sought by most modern car buyers, and is a design element increasingly adopted by most of the carmakers. The pentagonal honeycomb mesh grille with a slat running across it housing the Chevy bowtie is the new face for all Chevy cars and goes rather well with the overall design of the Cruze.

You continue to get impressed as you open the door and climb inside.  The interior of the Cruze has been very tastefully appointed and the first impression once you get seated in the driver’s position is that of comfort, luxury and sophistication. The Cruze feels like a proper D-segmenter from inside and not like a mid-sizer trying to grow bigger than its boots. The dashboard for our test car was done up in a two-tone finish of black and beige with neat touches of brushed aluminium on the steering wheel and the centre console. The layout and the design of the centre console on the Cruze looks pretty neat and futuristic, though it’s still some distance away from the quality you witness on German premium cars.

Once in the driver’s seat, all set to turn on the ignition, people who aren’t too used to driving premium cars may get a bit confused as there is no ignition key slot. There is, instead a proximity sensor for ignition as well as door locks to allow ignition and unlocking of the doors on sensing the key dongle at a distance of a few feet. The tech has earlier been seen on cars like Nissan Teana and a host of other premium cars, but is a novelty for a car in the segment in which the Cruze resides. You press a starter button to turn the ignition on in a proper sports car fashion to bring to life the 2.0-litre common rail diesel mill that GM marketing blokes prefer calling TCDi. 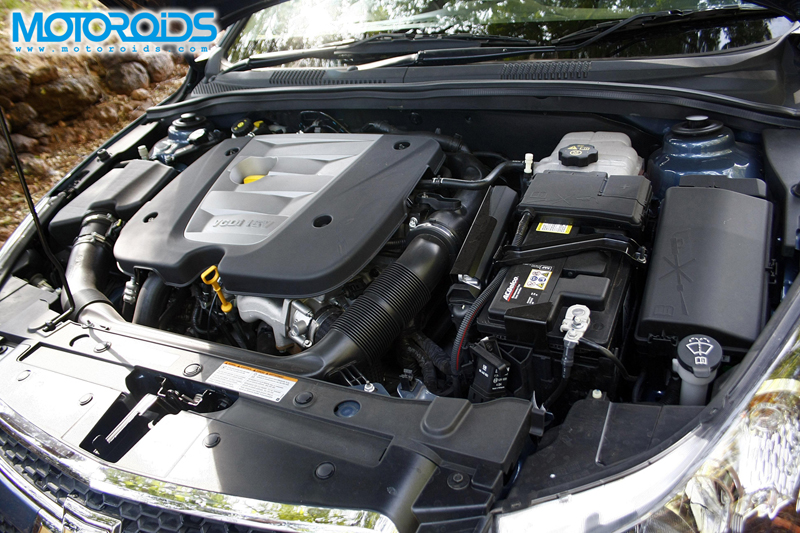 The refinement and smoothness of this diesel mill makes itself evident right from the word go. There isn’t any irritating loud engine clatter that you get to witness on some other diesel engines, Skoda PD units, and indigenously developed Tata engines require a special mention here. This one is pleasantly smooth and has a lot of meat once on the move – delivers a solid punch in a silken glove, if I may be allowed to be a little clichéd. It’s not all rainbows and valleys and waterfalls though. There are some flaws with the Cruze’s engine which have been characteristic to quite a few other diesel units as well.

It’s been more than 85 years since humans first used a diesel engine in a proper automobile (a truck). For some reason, even after having sent a few rockets to moon, having the entire world covered within the range of N-tipped missiles and finding an artificial replacement for every part of the body, we have not been able to understand the simple fact that a city car’s engine spends ninety percent of its life between 1200-2000 rpm. Now most diesel engines would be as dead as a dodo below 1800 rpm, immediately after which they will jump out of bed and deliver a solid ‘Mike Tyson’ jab right into your nose to stun you. The turbos of these diesel mills just won’t spool before it’s too late. That’s why the Swift DDiS is such a beauty to drive, as it starts delivering the punch right from the bottom of the power reservoir. And that’s exactly the reason why we were not very happy with the engine of the Cruze. There is hardly anything below the 1800 mark, so you have to keep shifting every time you decide to attack a corner while going uphill, or while overtaking on a truck infested highway. The Cruze suffers from the LBE (Low Bottom End) syndrome.

However, once you cross the 1800 mark, and hit the open roads, the Cruze unleashes its wonderful abilities. With loads of torque at hand, a slight dab of the accelerator paddle pushes this baby ahead in a potent yet understated manner. There is always a big packet of power and twist available once you’re past the lower rev-range. The amazingly refined engine, along with a taut steering feel and a surprisingly well tuned suspension gives the feeling of a well engineered, solid car. The firm-ish suspension is the highlight, which although slightly bouncy at slow speeds on rough surfaces offers the optimum balance between comfort and sportiness once you’re past crawling speeds. The Cruze delights with its on-road behaviour. It swallows minor undulations without even letting you know about them and gags the unsettling clanks of bigger potholes into a muted thud and shows great manners around bends with its negligible body roll and reasonably precise steering. It’s not an absolute driver’s car, mind, but with its taut behaviour, punchy power and relatively stiffer, heavier steering may well guile the occasional driver into believing that it’s one.  The tilt and telescopic steering will go a long way in adding to the euphoria of such mortals. 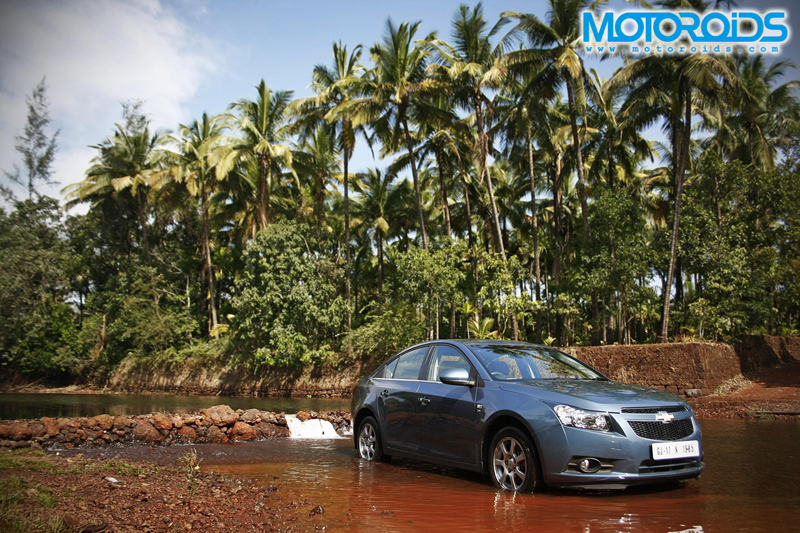 The amenities inside the car match up with some of the pricier cars. Apart from the nicely done up design along with a reasonably good quality of materials and good ergonomics, the blue cabin lighting of the Cruze further adds to its upmarket appeal. A stylish speedo-tacho binnacle along with a trendy digital trip-computer readout in the middle and a stylish steering wheel with mounted control makes for a very luxurious feel. Then you have cruise control, which is a rare sight in this category of cars. Although it doesn’t take more than a flick of a finger to turn the wipers on, something like rain-sensing wipers not only add to the gizmo list, but also to the feel good factor while also allowing you some bragging rights in front of your friends. If that’s not enough, GM has a rear parking sensor plonked in for you. There is plenty of space at the backseat, with enough shoulder room to accommodate three adults in comfort. There’s loads of legspace too. The pliant ride thanks to the well sorted suspension, the muted cabin, along with a fab sounding music system further adds to the luxurious feel.

We drove the car for about 600 km, and even with all the hills and our hooliganism, it managed to return us a very respectable 11.5 kmpl. That’s a very good fuel efficiency figure for a car in this segment. We are sure one should be able to extend the distance per litre by another 1-1.5 kmpl if he practices a little restraint.

Time to sum up things then! Even with the slightly weak bottom end spunk, the Cruze makes for a great car for those who are looking for a value deal in this segment. The Laura may be better engineered, and may have more option boxes ticked, but the advantage comes for a substantial premium over the Cruze. The Cruze may not have set a new benchmark for its segment, nor is it a scorcher but compare its price with the rivals and you’ll know that it’s great value. Moreover, after driving a manual transmission car for about 300 km, you climb out as fresh as when you climbed in, you know it’s a good car to buy.