Enter into a Honda dealership, glance around and you feel like all the different Hondas on display are members of a plain, simple, pleasant, square family. But then your eyes fall on that orange Aviator in the corner which stands out like a lanky rebellious teenager with an earring. With the Aviator, Honda has rather uncharacteristically ditched the safe, boring, ‘mass-appeal’ approach and gone for the bold, adventurous one.

Last time round when I was entrusted with the task of comparing three big scooters, the Activa 110, the Access 125 and the Aviator 100, I found out that none of the three were really perfect and the real winner would be the Aviator if and when it got the Activa’s powerplant. So now that the scenario has materialized, does the lofty Honda live up to the expectation? 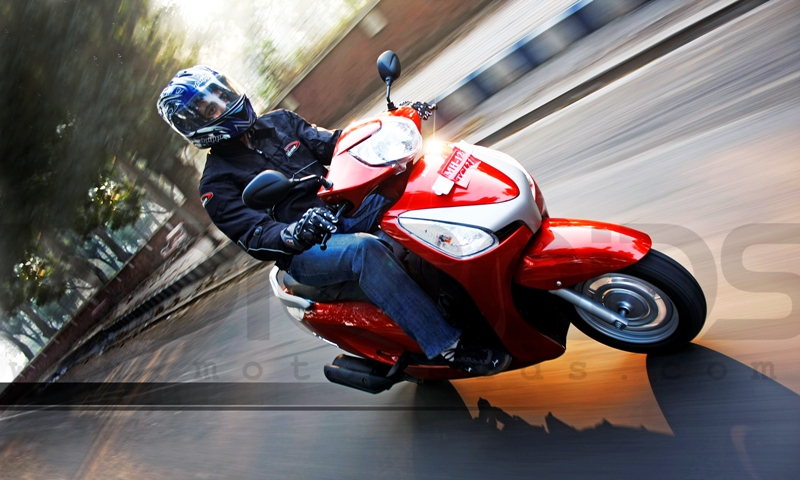 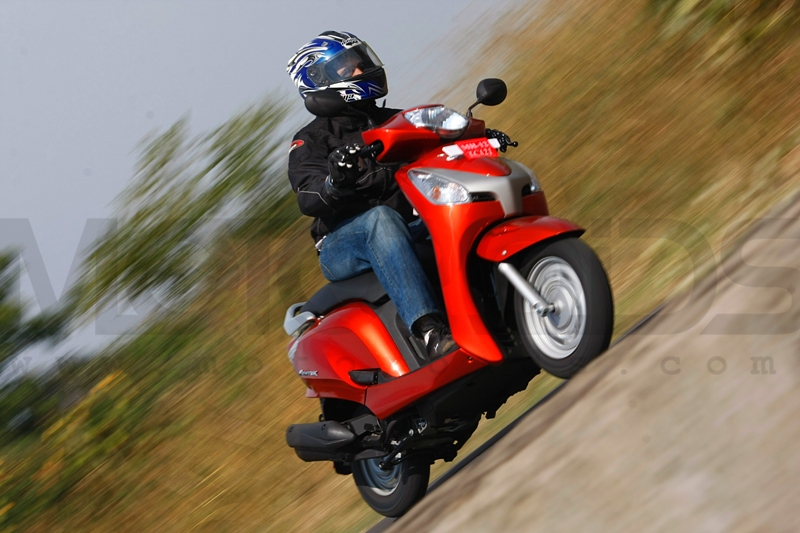 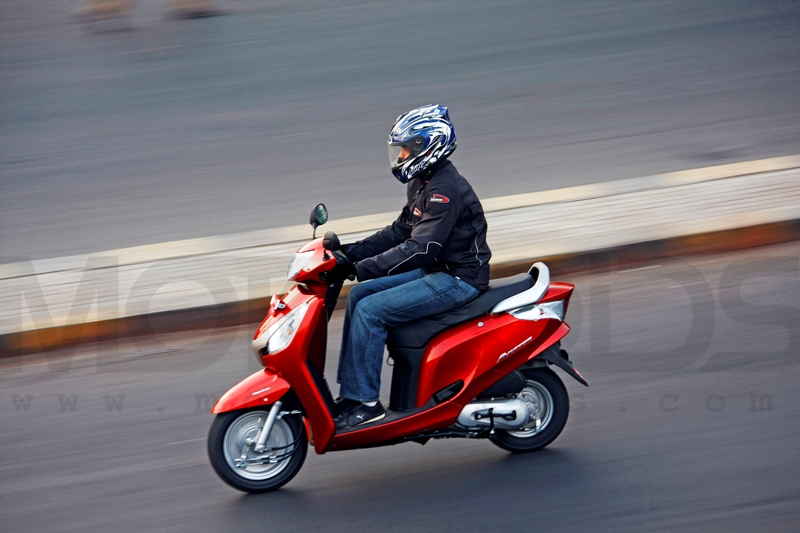 When Honda launched the Aviator last year, the styling felt a bit too radical to stomach. But since then, the Aviator’s styling has grown on me. The more I stare at it the more I appreciate it. It is styled with a certain panache incorporating some bold flame surfacing cues from its 4-wheeled counterparts. I love some of its quirky details like that smart front garnish, the gorgeous floating fender, a bold, old-school, 3-D chrome decal and the fact that it does without any tacky stickering. However, I still find some of its details a bit hard to stomach, especially that outrageous tail end with its oddly shaped light cluster and the tail panel that sticks out like an integrated spoiler. But one thing’s for sure, love it or hate it, it is definitely not boring. It is the only Honda made in the country which can claim to be related to the new VFR and kudos to HMSI for that! 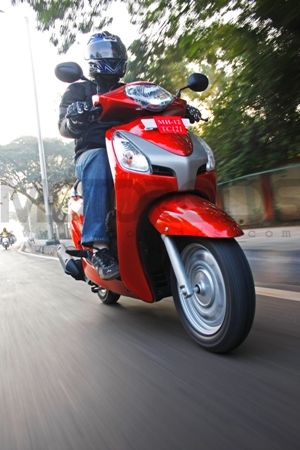 Our test bike did have some minor issues, the mirrors kept undoing inspite of repeated tightening, and the underseat plastic panel always got into the way while shutting the underseat storage. A couple of plastic bits looked too low-rent to belong on a Honda. But these are just minor irritants compared to the otherwise marvelous engineering that has gone into making this one of the best built bikes in the country. The Aviator has that light and lithe yet sturdy, Japanese, precision feel to it. And having experienced the Honda’s foolproof reliability first hand for the past eight years I completely understand why people swear by an Activa.

The Aviator is the tall boy of scooters. Jump aboard and you get the feeling of being perched up one level above other ordinary riders. Seat height is higher even compared to the Unicorn (I mean the bike not the creature!) and this single factor will alienate a lot of prospective buyers right away. Honda seems to have realized this a bit too late and in the interest of fixing the problem, made a stepped seat by reducing the height of the sponge in the frontal half. But instead of solving the problem this has made it even worse. It has hardly made any difference in seat height. Instead, a tall rider has to sit in this ‘step’ and cannot slide backward on the seat, like he usually does, on scooters with flat seats. This means that the rider has to sit bolt upright, with his legs folded and his torso uncomfortably close to the handlebar. Removing that afterthought of a step will make a world of good to the Aviator’s ergonomics. 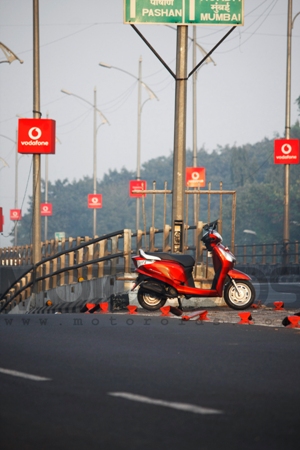 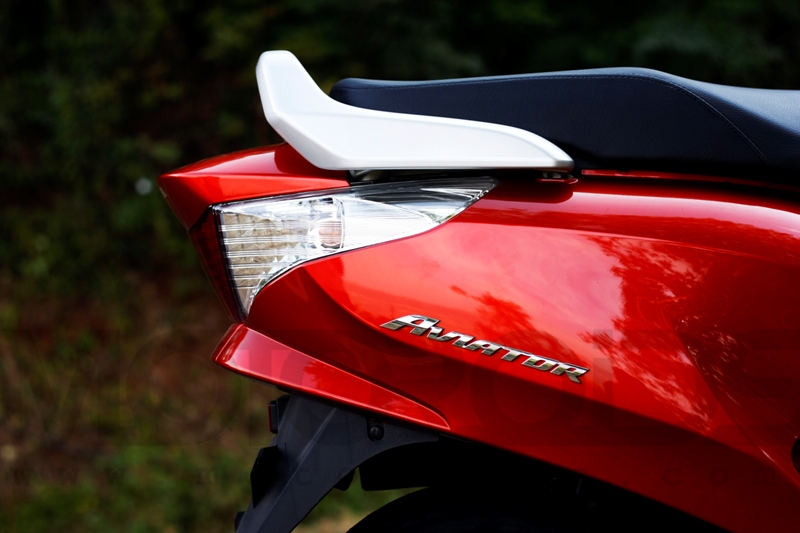 The old 100cc Honda mill was a benchmark in its segment ever since it made its debut, almost a decade ago. However, the competition had slowly caught up with it, revealing some of its shortcomings. The old engine was a bit down on fuel-efficiency and the gearbox did not disengage at higher speeds causing a marked ‘engine braking’ effect. The new engine has been developed with only one goal in sight; maximum possible fuel efficiency. And Honda’s engineers have successfully achieved it. The Aviator returned praise worthy *50* kpl, which is a big improvement over the old engine. 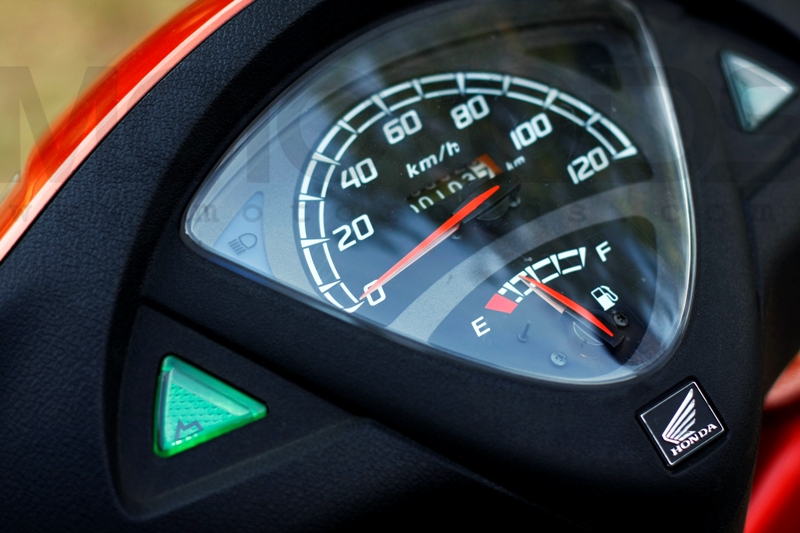 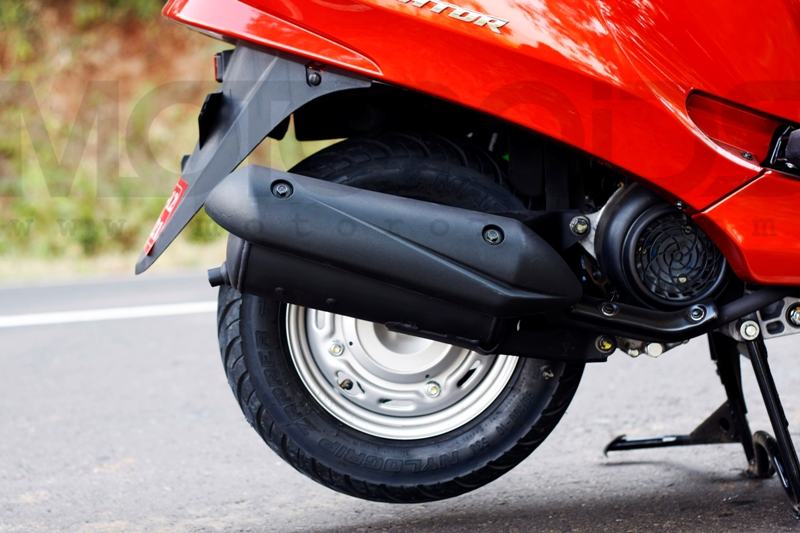 The 110cc Honda mill is a masterpiece

Performance was never an issue even with the old engine and the new engine is no different in that regard. It does not have the satisfying thrust of the bigger engined Access but you never feel any lack of poke until you head out of city confines. Ride the old Activa and you will be surprised by the perfectly refined nature of the old engine. It is impossible to improve upon perfection, they say. But Honda has somehow managed to do just that. Infact this new engine is so muted that it is possibly the most refined bike engine on sale in India, ever.

The Aviator sports a 12 inch 90/90 section front tyre and telescopic front suspension, both which bring about a huge improvement in its dynamics compared to the new Activa. In terms of handling, the Aviator is in a league of its own. It clings to the road unlike any other scooter on the market and delivers brilliant feedback from the front. However, the telescopic shock absorbers a set-up a bit too hard, at low speeds, you can feel all the minor bumps and ridges of the surface underneath. Gain some speed and the Aviator will impress you with its composure and body control at speed. This chassis can easily handle a bigger engine. If Honda is serious about targeting the male audience with this scooter, they should really consider a bigger more powerful engine. 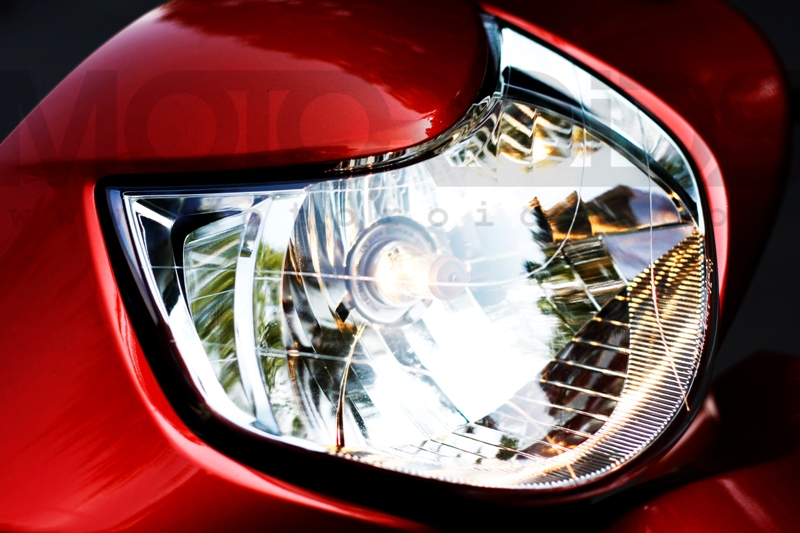 The headlight has a weak throw and spread

The model that we got for testing was the Std. variant with combined braking system but no front disc brake. Whenever you use the right side brake lever, both the brakes kick in, instead of just the front one. Even though this system does not actually lower the braking distance, it does help in the day-to day scenario. It reduces the chances of locking up the rear tyre, in case of emergency stops. 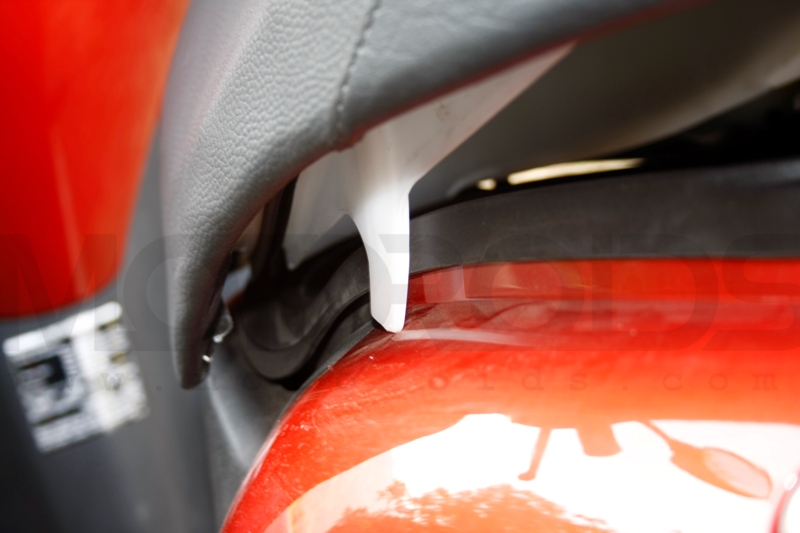 The under-seat plastic keeps interfering while closing the boot

A word of advice here, don’t shy away from spending the extra couple of grand for the disc brake. The puny little drums that all scooters in the market come equipped with are totally inadequate in terms of stopping power, they are prone to fade and have that characteristic lag which is irritating as well as dangerous. It is high time that drum brakes got relegated back to the history books. 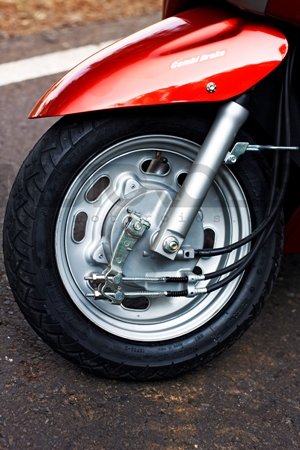 The combined braking is a boon during emergency stops

A special mention goes to the MRF Zappers which held their own extremely well under braking, better than the best ones on a scooter I had ridden so far, and that was a Dio fitted with aftermarket Hankooks! 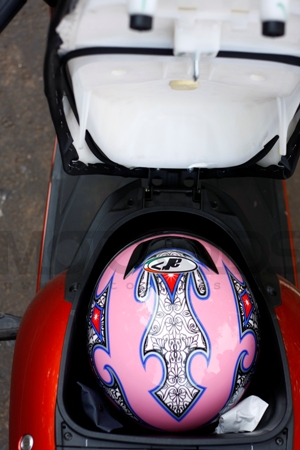 Capacious under-seat storage can gobble up a big lid

The Aviator retails for a significant premium over the competition. The STD variant costs Rs. 48,000 and the DLX variant, Rs. 53,500 (both prices, On-Road, Pune). The DLX variant comes loaded with a front disc brake, alloy wheels and a chrome garnish on the front panel. Combined Braking system is standard on both the variants. Honda has missed out on the chance to incorporate some of the useful touches flaunted by its competitors like the fuel filler car placed on the front apron, which saves you from a lot of trouble at the petrol station. It also has a weak headlight and an unwieldy brake lock.

Unlike some of it’s competitors, it also skimps on the pointless stuff like LED tail-light, pilot lamps, digital instrumentation, safety lock for the lock, mobile charging point and vanity mirror, okay, I admit, I made the last one up. 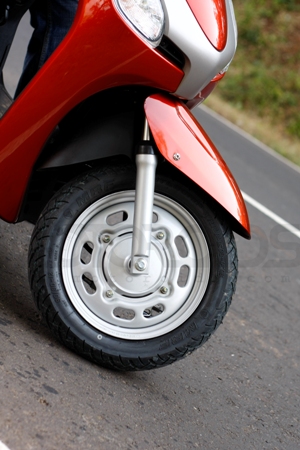 The big telescopicfork and the 90/90 R12 tyre aids handling 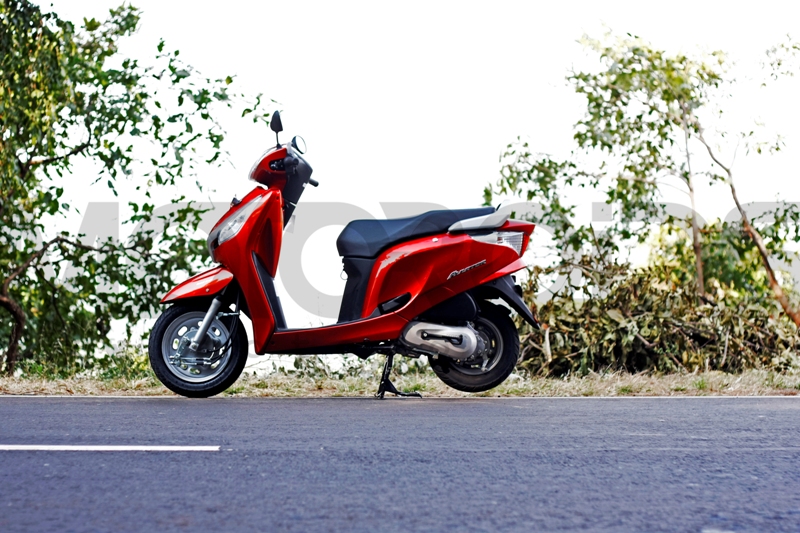 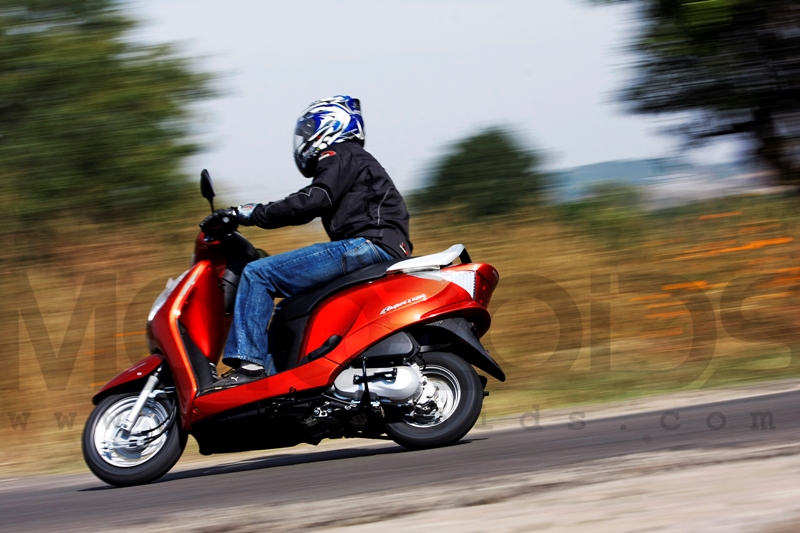 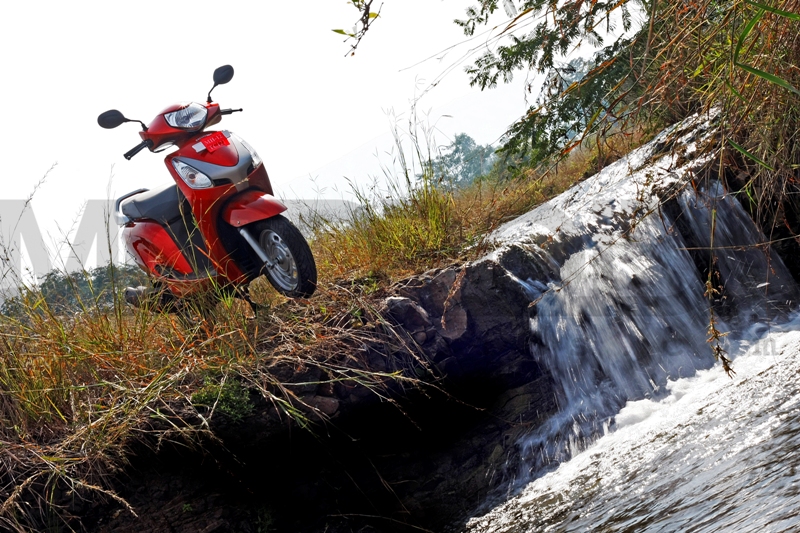 The Aviator 110 has the best brakes and refinement in class, great handling and build quality and most importantly good fuel efficiency. However, it does have some shortcomings like a harsh low speed ride and a big asking price. But, even then, it is still the best scooter in business and totally worth the extra money over its competitors.

It is very much like its namesake movie, ‘Aviator’. Great film, but sadly the movie never ran more than a couple of weeks at the local multiplexes. Charlie went in expecting grand special effects and came away disappointed. Only the real movie buffs were able to appreciate the biography of Howard Hughes as told by the great Martin Scorsese. Similarly, inspite of being a better product than the Activa, the Aviator never really took off in the sales charts. It takes a connoisseur to appreciate a good flick and similarly it takes an enthusiast to appreciate a good scoot! The buyer is getting smarter they say, but has he become smart enough? Only time will tell.