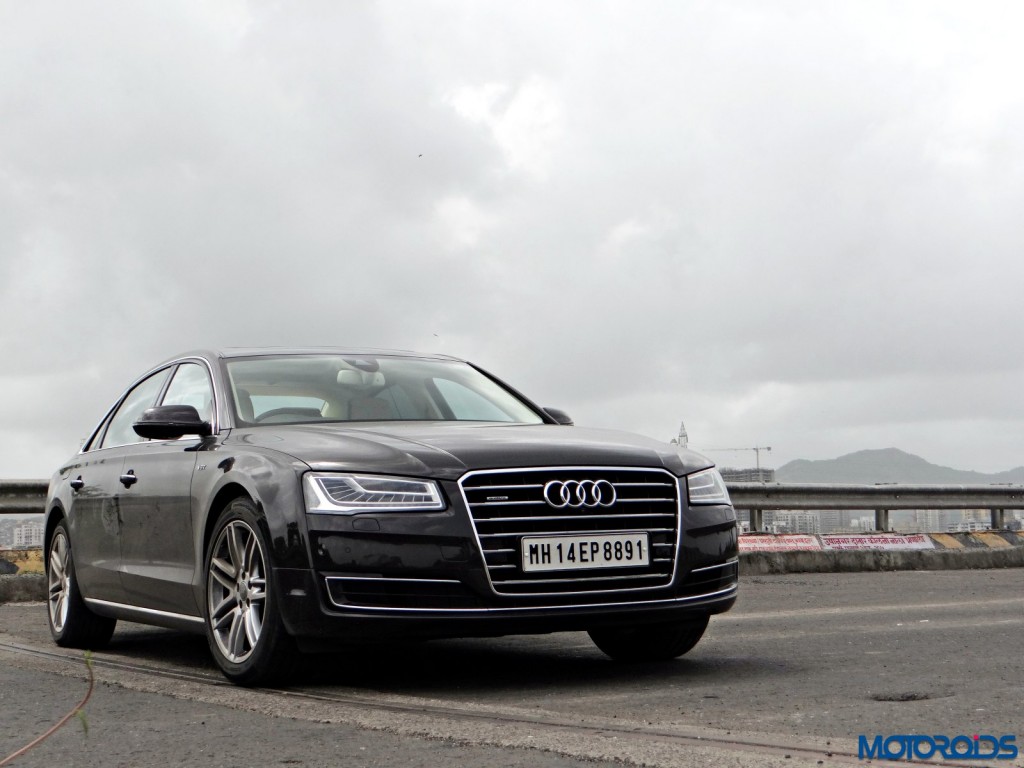 The Audi A8 was widely considered to be a car that had outclassed the segment leader S-class before the latest generation Mercedes-Benz sedan reclaimed its position in an astounding manner. Nonetheless, the A8 still holds its own in the luxury limo segment with its lightweight aluminium spaceframe chassis, a variety of silken smooth, yet punchy diesel and petrol engines and in-cabin amenities which outclass the new S-Class in a few ways even today. We drove this epitome if indulgence on two different occasions earlier and came away totally astonished. You can read our exhaustive previous reviews of the car here

So while we reviewed the face lifted (2014) A8 L outfitted with a 3.0 liter oil burner a while ago, the new version of the model with its gargantuan 4.2 liter engine eluded us for a while. We’ve finally managed to lay our hands on the oil burning limo-rocket, though, and as expected, have been blown away. We will keep this review restricted to the changes over the 3.0 TDI variant we exhaustively reviewed some time back. You may refer to our previous reviews to discover the limo in greater detail. Here goes.

What’s new with this version of the A8? 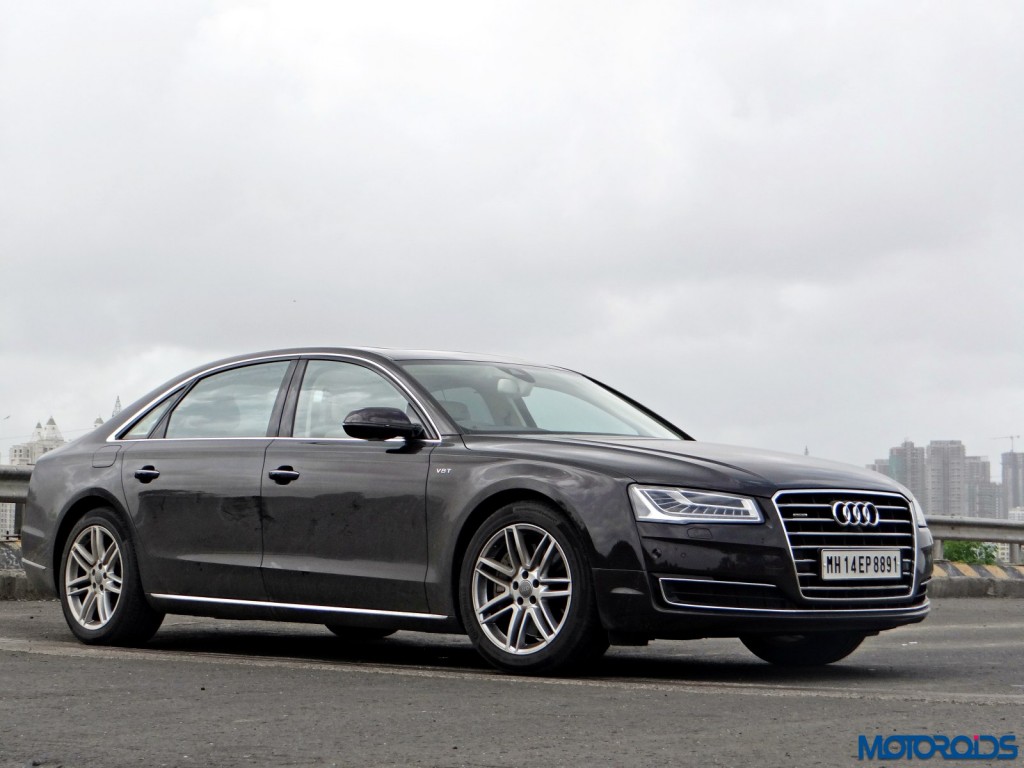 The A8 was duly face lifted for MY 2014 with subtle changes on the exterior and some changes inside. The most prominent differentiator was the change in the shape of the headlights and the integration of the Audi proprietary Matrix LED headlight technology. The new, MY 2017 Audi A8 is being prepped for a late 2016 launch as we write this, though the current gen car is also a supremely talented automobile. Changes on the inside are more subtle and difficult to point out, but that cabin hardly had anything to complain about anyway.

What has changed on the outside?

The 2014 A8L carries over the proportions and lines of the previous version. It adopts subtle changes to make the new version look and feel more elegant, though. The imposing Audi grille now gets 7 horizontal chrome slats as opposed to an earlier 8 to make it look more clutter-less and elegant. The lower part of the bumper now features a chrome lining on the lower lip and around the side air dams. The bonnet gets twin creases for a more muscular appearance. The most prominent change on the fascia, however, is the stunning new Matrix LED headlamps with integrated day time running lights. The Matrix LED system dims light that would shine directly onto oncoming vehicles, but continues to illuminate the zones between and beside them. This is facilitated by making use of LED high beams which are split into numerous individual light-emitting diodes. 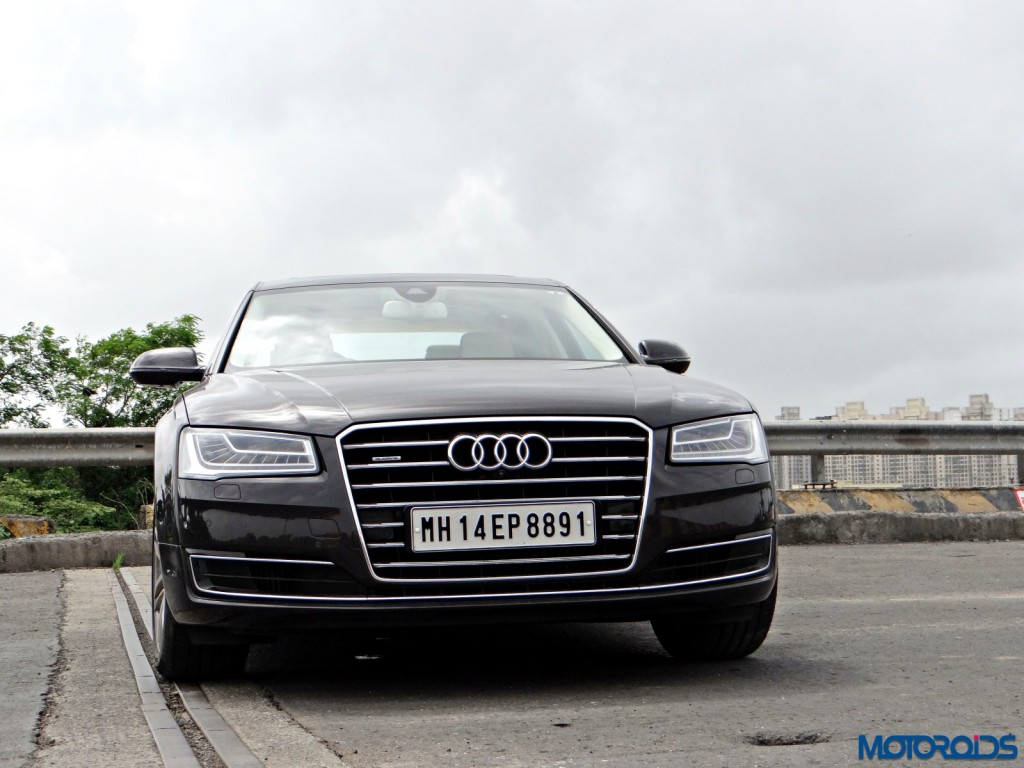 The wheels on the 60TDI version are new, and different from the 3.0 litre diesel with their 7×2 spoke design, which looks great.  The rest of the design in side profile remains same as before.

The posterior of the car has been re-designed, too. The tail-lamps, while still featuring LED tech, have been restyled to look slimmer, have a more modern lighting pattern and have been split in two with a connecting chrome slat. The straight chrome strip joining the two tail-lamps also helps accentuate the curved boot lid. The chrome strip wrapping the bumper now extends more towards the wheel well for an enhanced wraparound effect. 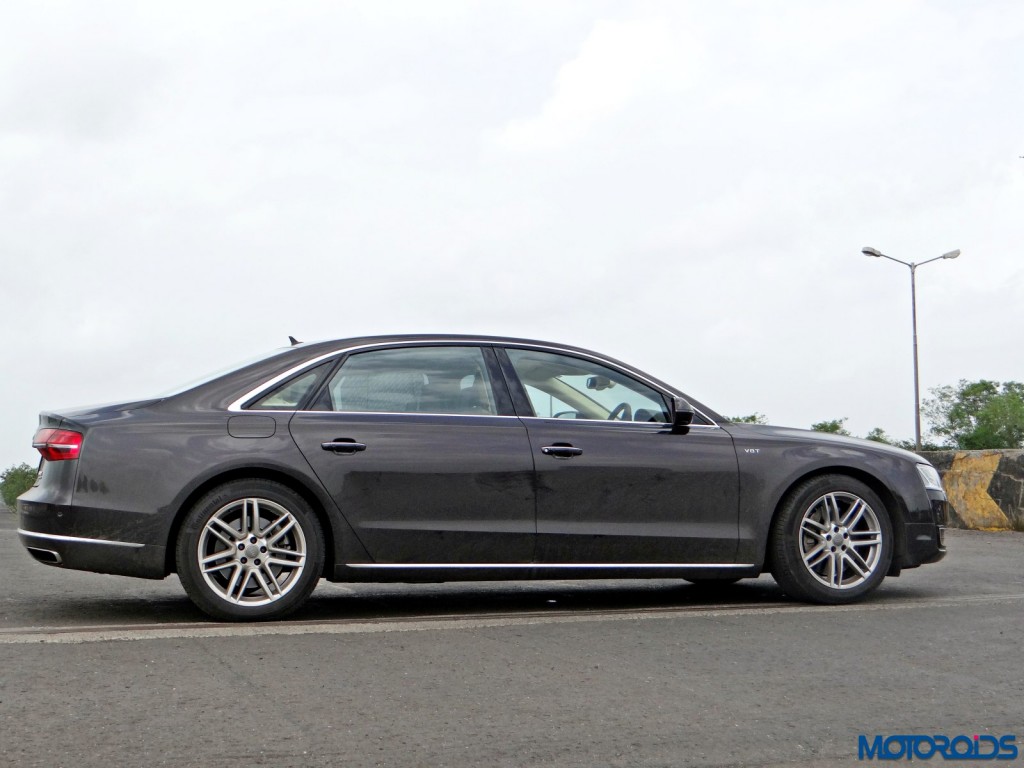 The rather humble twin round tail pipes on the earlier version have been replaced with sportier, slimmer and more aggressive looking trapezoidal units, which are drenched in chrome. The earlier 4.2 TDI badge has been duly replaced with a 60TDI label in compliance with Audi’s new nomenclature directives. What are the changes inside the cabin?

The Audi A8 has always boasted one of the most posh interiors in the business, and the Audi A8 carries over all the goodness of that grand cabin with only a few subtle changes. The glossy finish of the light brown inlays has given way to dark brown, matt finish wooden inserts with prominently exposed grain underscoring the wood’s quality and underlining the attention to detail. Similar treatment has been meted out to the glossy bits on the centre console and drive selector. The lower dashboard is now draped in light beige as against the earlier black. The upholstery has also been restyled and now features a beige colour as against the earlier brown, with new contrasting accents in places. 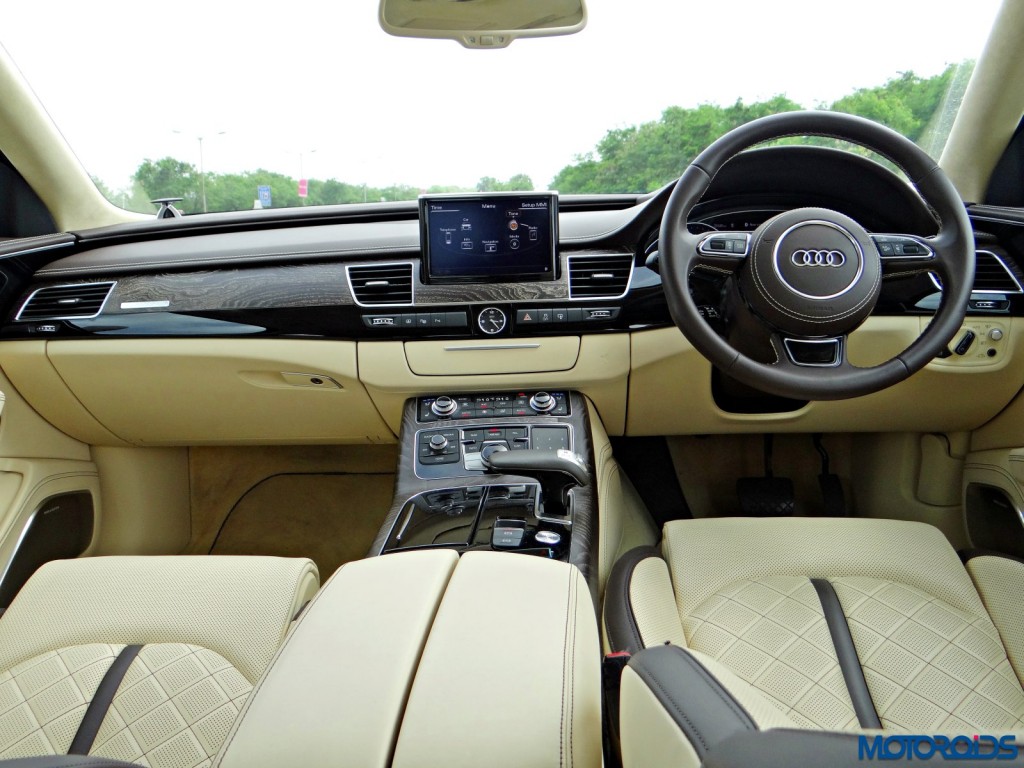 Another prominent change made to the cabin is the new 3 spoke steering wheel as against the four spoke unit on the previous version. The new steering wheel is wrapped in leather all around and doesn’t have the wood inserts the earlier version had on its top and bottom ends. We also noticed that the suede finished door panels on the earlier version have now been replaced with regular beige leather, like the rest of the upholstery.

One should note, though, that the changes mentioned above are based on the cars we got for test. The Audi A8 allows its customers to choose from a variety of colours, materials and trims to customize the interior to their taste.

You seem very upbeat about the car’s interior. What’s there to rave so much about?

Here we have a collection of images along with descriptive captions to give you a tour of the luxurious interior of this limo. Have a look, and get amazed. 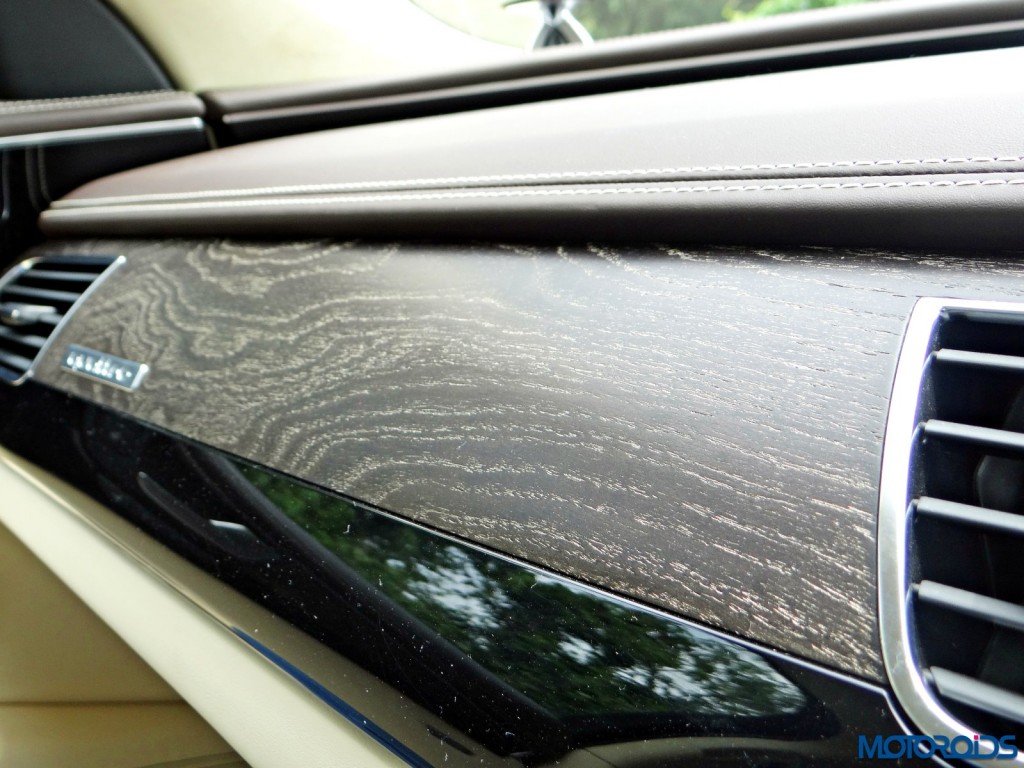 The centre console looks no less than an airplane’s cockpit 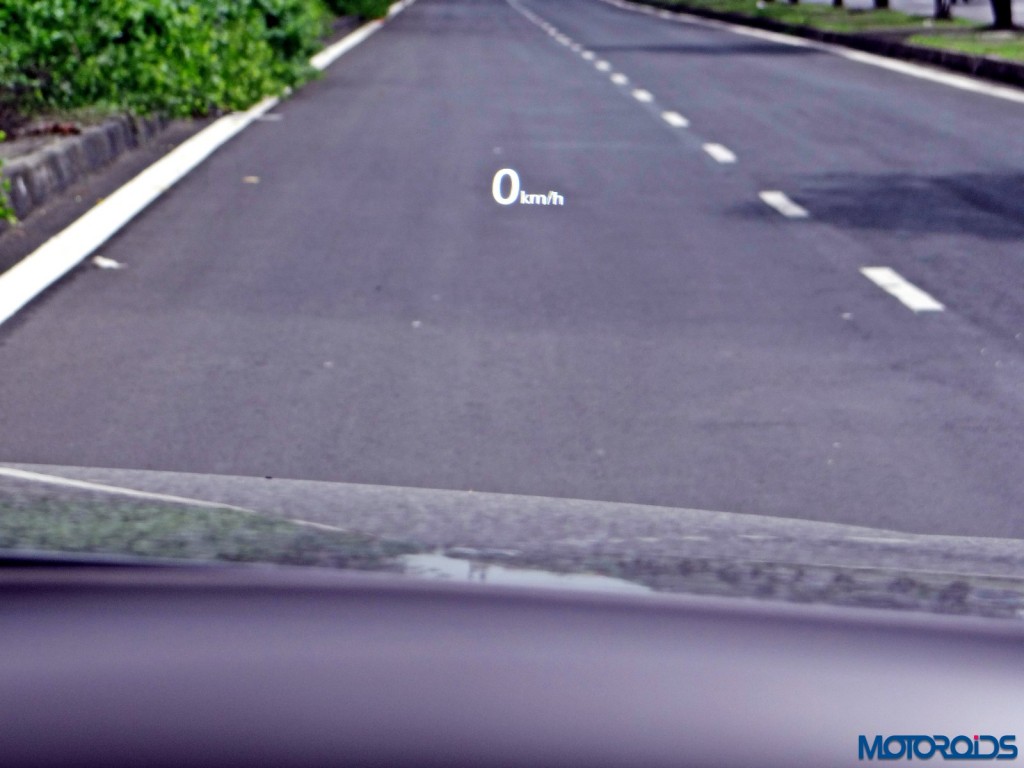 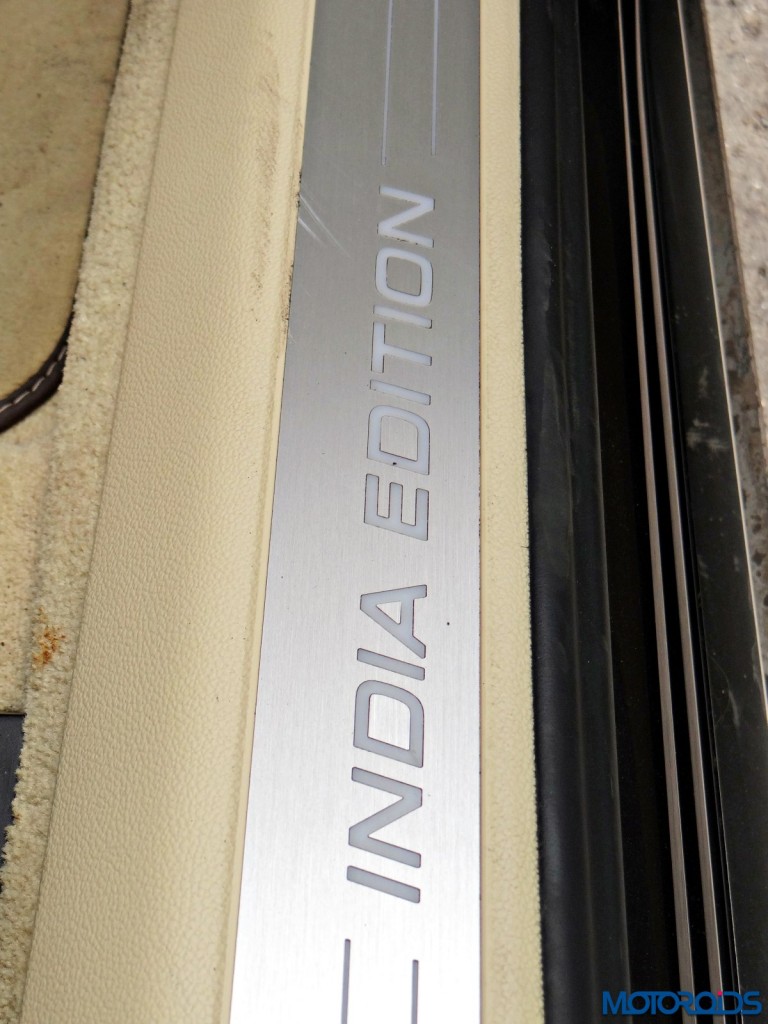 One push of the button and the front passenger’s seat folds away to liberate enormous room for the back seat occupant. Motorised flap behind the front seat back flips open as a foot rest. Back seats can be electrically reclined too. There is a small fridge too! 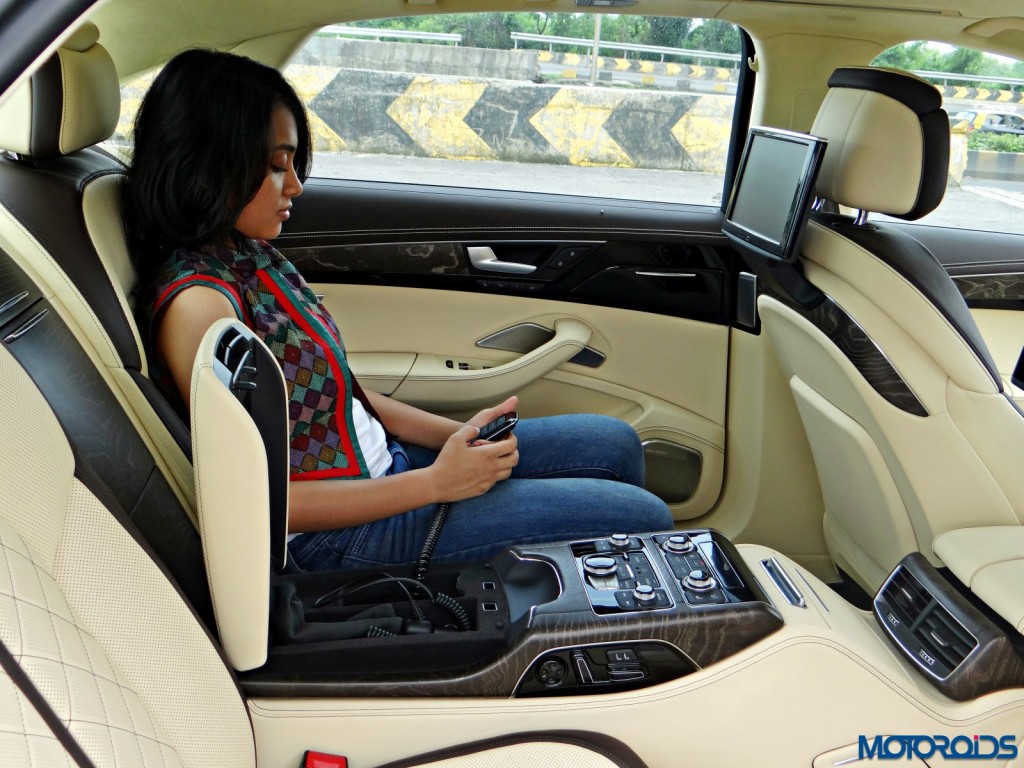 Flip open the rear central arm-rest to reveal controls for the massage function. You can choose from a variety of massage programs. 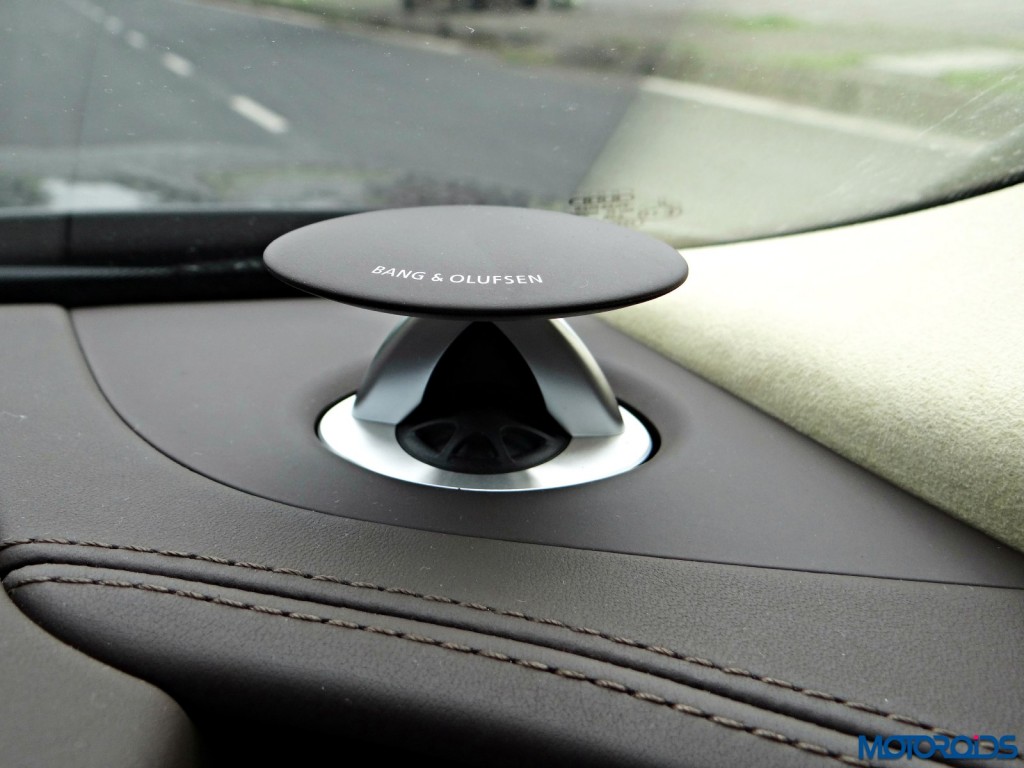 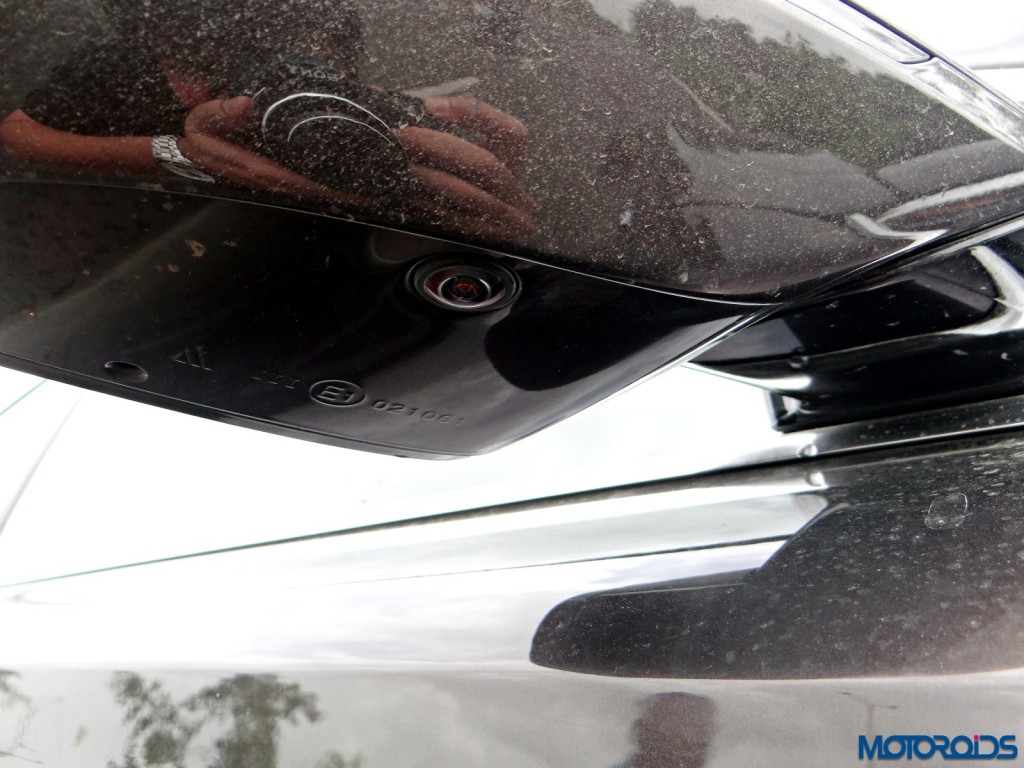 An army of cameras all around act as the eyes of the car to give you a 3 dimensional projection of the car inside the cabin. The A8 L can also park itself upon indicating a parking slot. The leather wrapped drive select lever is unlike anything you will come across. As we observed during our previous tests too, shifting between R and D can sometimes get bothersome with the shifter not slotting in smoothly and precisely enough. 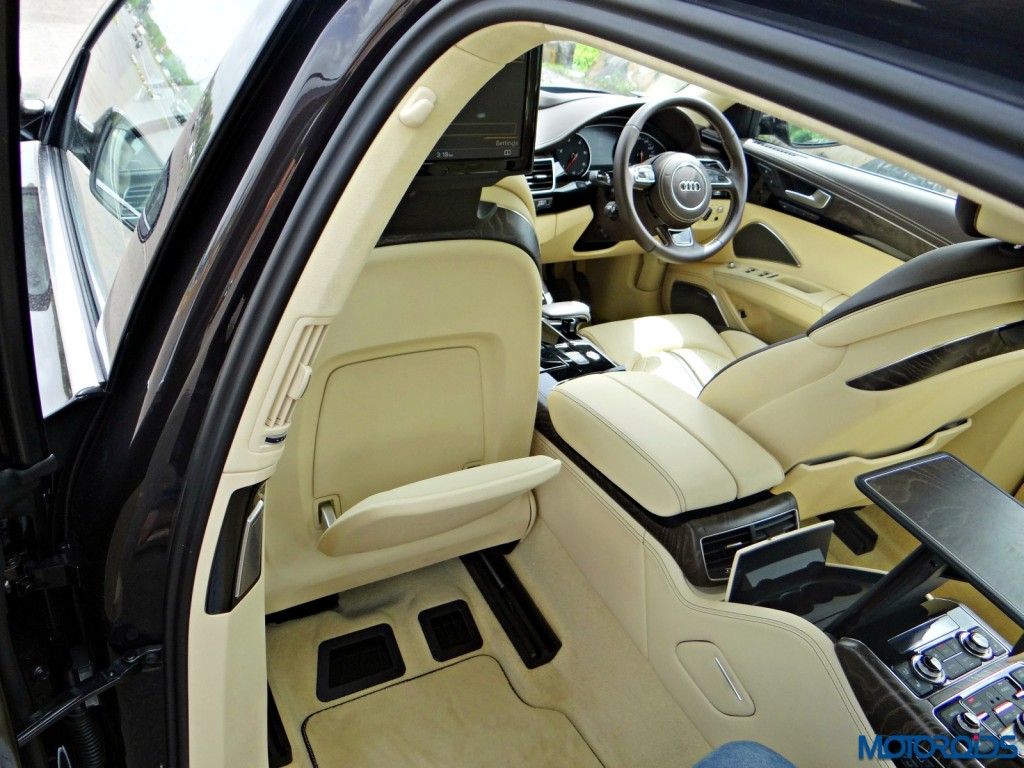 A wide view of the cabin

What kind of numbers does that big 4.2 litre V8 create?

While the new Audi A8L gets the 4.2 liter diesel unit from the version it replaces, the engine has been tuned to develop notably more power and torque. In its newest version, the 60TDI boasts 385bhp (up by about 40 bhp) of power and 850 Nm (up 50 Nm) of peak torque. The kind of shove those numbers translate into is good enough to render the weight of this heavy car immaterial. 0-100, for example, comes in a quick 4.6 seconds, and the A8 will reach its electronically limited top speed of 250km/h without having to break a sweat. 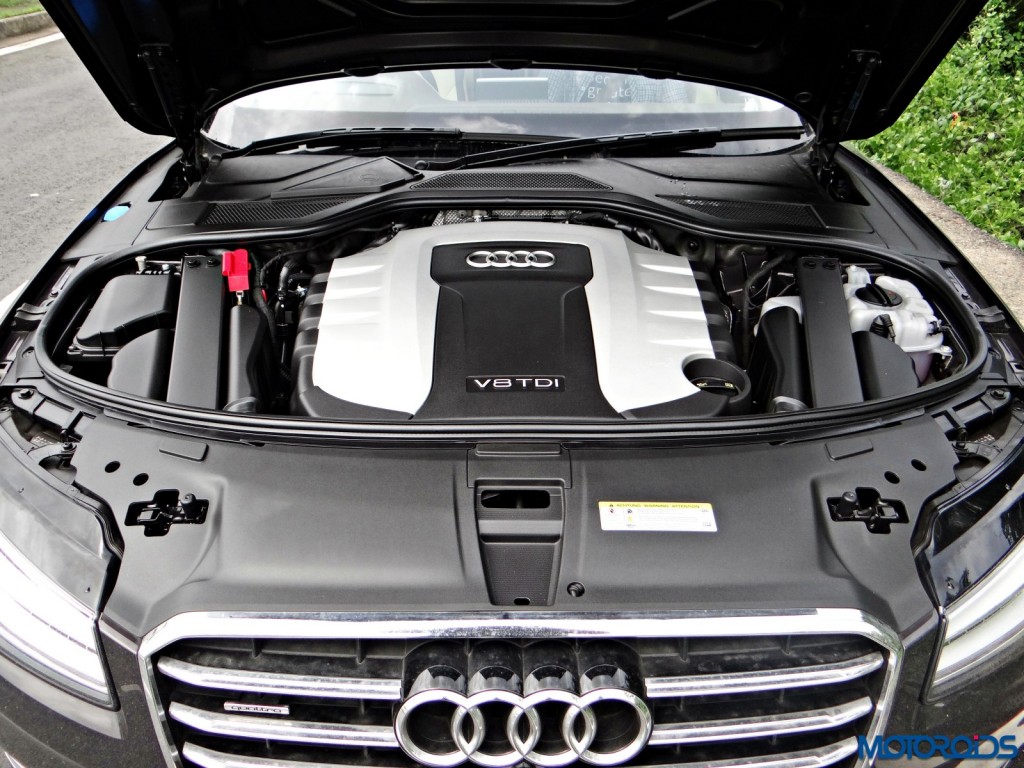 Audi don’t use their dual clutch S-tronic transmission for this version of the A8, simply for the reason that it cannot handle that deluge of torque. The ZF sourced 8-speed Tiptronic system takes care of the transmission duties here. Though not as lightening quick as the S-Tronic, the Tiptronic is fairly fast and efficient. Shifts are jerk-free, almost imperceptible while up-shifting and satisfactorily quick during kickdowns. There really isn’t a reason why one should have any complaints about that engine-tranny combo.

Audi makes use of its superlative Aluminium Spaceframe tech to try and keep the weight of this Mammoth of a car with a length of more than 5 meters to a little over 2.1 tons. That engine, with its epic torque, however, makes that weight non-existent as you dab that right pedal. The A8 surges ahead with stupefying reassurance irrespective of the rev range you’ve placed it in. The engine, apart from being overwhelmingly powerful and torquey, is also inconceivably quiet. The tranquillity inside the cabin translates to eerie at times, especially with that big, bad oil burner propelling this beast. It’s only after 3500 rpm that you get a mild hint of the engine at work. The fabled Quattro AWD lays down all that power and torque to the tar in the grippiest manner possible, and is assisted in the noble task by the 235/55 R 18 tyres. There really aren’t any theatrics in the way the A8L 60 TDI moves ahead, even at a rapid clip. No squeals, no slithering, just a reassuring shove and the greenery flanking the road turns into motion blur. The A8 L can also be ordered with a sport rear differential at extra cost. The technology splits drive between the rear two wheels apart from juggling it between the front and rear axles, for even better grip. 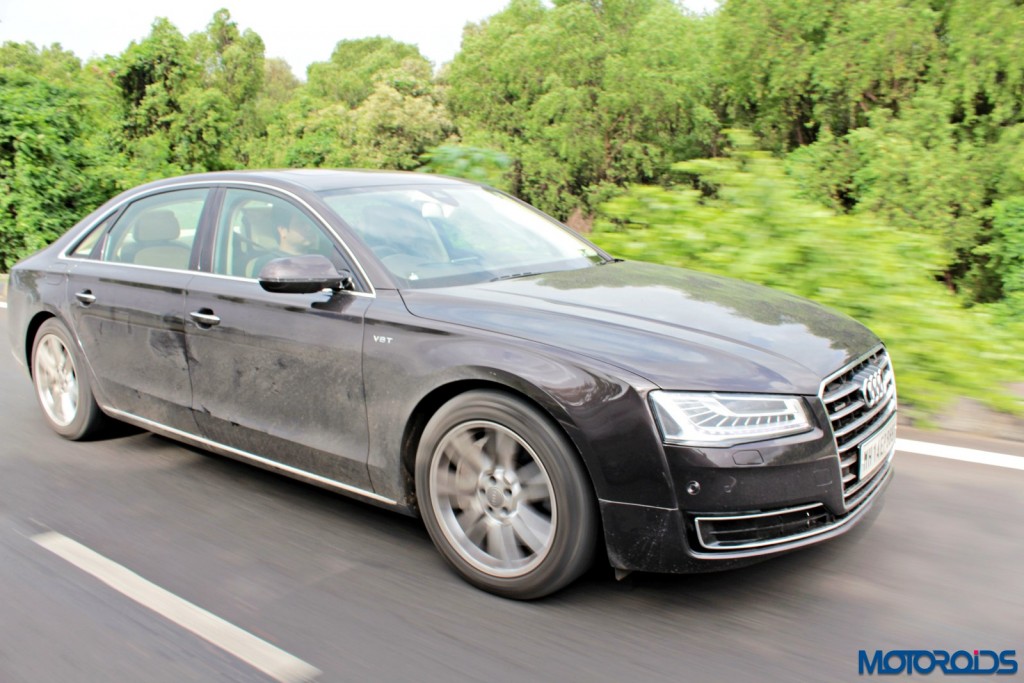 On the move, the A8 truly belies its weight and size, especially when switched into Dynamic mode. The air suspension gets firm, the steering gets heavier and the transmission is put on red alert. With more than 2 ton of weight and that massive size there sure is a wee bit of roll to be experienced. But even with all that weight and a continuous discharge of enormous torque, the A8L holds its line in an unshakeable manner until you forget the segment it belongs to and start treating it like a lithe, lightweight compact sports car. That weight and size, complying with the laws of physics do their bit to make the A8 resist sharp directional changes, even so, in the taut Dynamic mode, this luxury limo far surpasses your expectations as regards handling.

Does that mean the ride is compromised?

The A8L with its adaptive air suspension has the capability to adjust itself to your driving style with amazing aptitude. Switch to Comfort mode and the A8L will flatten the worst variety of the famous Indian roads for you. To enhance the comfort specifically for India, the car comes equipped with slightly smaller 18 inch wheels as against the 19 inch units on the European version. There is a bit of stiffness to be experienced at slow to very slow speeds, but as the car breaches crawling speeds, it tackles road imperfections and wavy undulations with utmost ease. 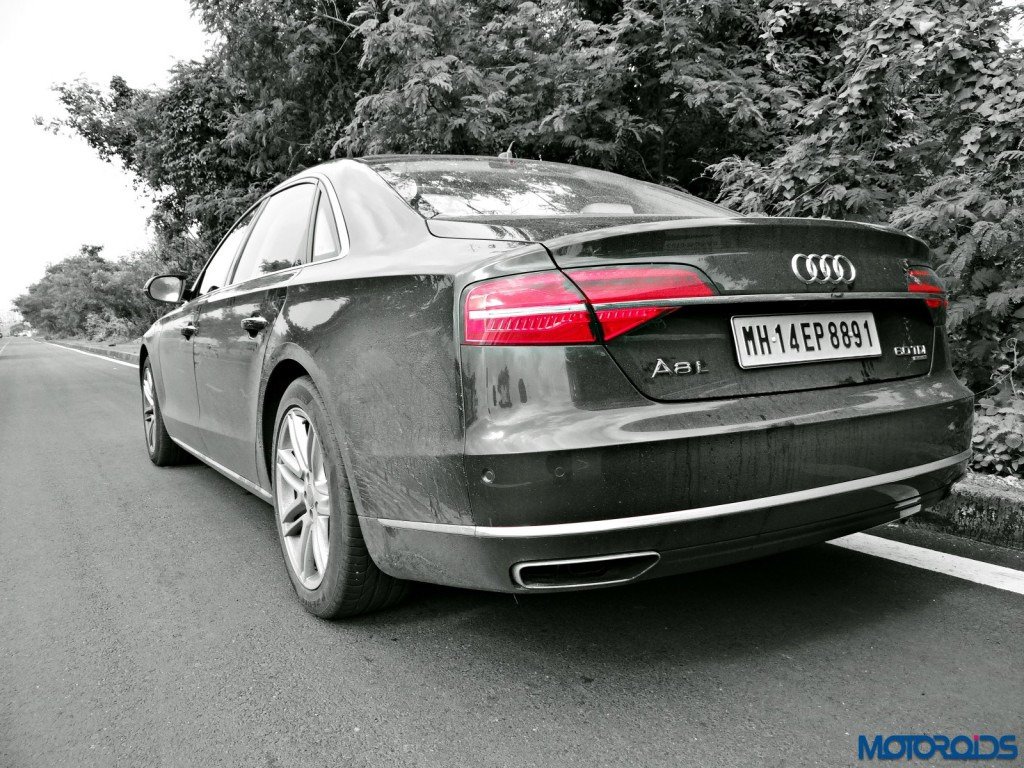 The A8 L, although in the last stage of its product life cycle, is still an immensely capable car. The highlight of this specific version is the stonking torque delivered by that 4.2 liter diesel mill and the comfort and luxury on offer which needs to be experienced to be believed. The amenities inside the cabin are top notch – be it the fully reclining rear seats with individual massagers, the magical self-park feature or the matrix headlights – the A8 is still one of the top dogs in its segment. It is soon to be replaced though, and the new version is expected to create new benchmarks for the class. We absolutely love the A8 L for its backseat, which in our opinion is still a segment benchmark for comfort. At Rs 1.3 crore ex-showroom, (less expensive variants are also available), the A8L 60TDi doesn’t come cheap, but for that price you get performance which cannot be matched by any other diesel car in the segment. It’s a worthy buy, even with a replacement in sight.