Last time I thought something will make me switch teams from Internal Combustion and get on-board with a battery-powered two-wheeler was back in 2012 when I saw Mission Motorcycles’ Mission RS. It was one of the most admirable electric motorcycles of all time and, surprisingly, was not designed by the wine sipping, pasta eating artists who have given the world some of the finest vehicles, ever. Mission Motorcycles declared bankruptcy and the world was denied what could’ve been a revolutionary product in the electric two-wheeler market.

Fast-forward to 2018 and a Bangalore based electric two-wheeler company is trying to revolutionize the way you travel in city. Ather Energy has been in the news for all the right reasons. The main trouble in introducing an electric vehicle in the country is the lack of infrastructure. To answer that problem, Ather Energy created their own charging station – the Ather Grid – before introducing their electric scooters, 340 and 450. However, Ather Grid not only caters to Ather electric scooter owners, but also to other electric vehicles on the road that can use the charging network to charge their vehicles. 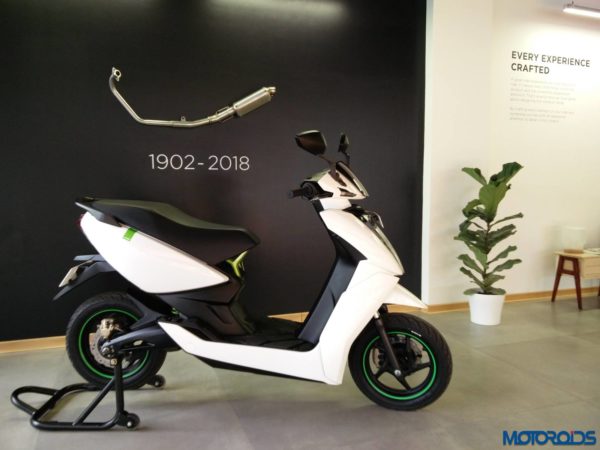 So, has Ather Energy cracked the theory to bring electric scooters face-to-face with the internal combustion scooters? We test rode the Ather 450, Ather Energy’s flagship product and India’s first smart electric scooter in Bangalore to find that out.

Check out the Ather 450 video review below:

If there’s one word that can define the styling of the Ather 450 – that would be ‘Subtle’. Unlike some of the other electric scooters that are around, the Ather 450 isn’t flashy or overcooked in terms of styling. However, while the Ather 450 has a subtle design, it isn’t vanilla. The scooter is painted white, with highlights of green under the seat (an exposed part of the frame), and on the side panel. The centrally mounted rear monoshock also comes painted in green.

Upfront, the scooter features highlight of black to the white paint. The full LED headlight is mounted on the apron. The headlight design is complimented with a brushed silver surround, all of which is neatly packed behind a transparent cover. 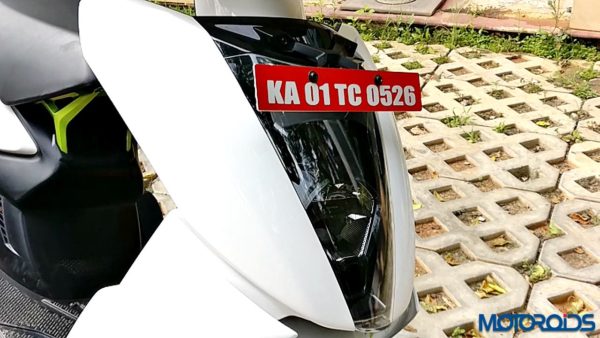 Now, here’s the smart bit. The scooter uses a 7-inch touchscreen display that, apart from displaying ride related information such as odometer, speedometer and the range, also shows navigation, alerts, and stores digital copies of the documents such as your driving license, registration information and insurance. The instrument console syncs with a smartphone app via GSM network so the owner can have LIVE information about his electric scooter from anywhere. Check out all the features of the instrument console in detail through the video below:

On the sides, a fibre panel visually divides the front apron from the footboard surrounds and gives the electric scooter a beefy look. The footboard is slightly raised as it approaches the side panels, under the rider seat to double up as a pillion footrest. Another design element is the side stand that, when not in use, runs flush with the bodywork and gives a clean look.

The white painted side panel gets a contrasting green sticker – with Ather printed on it – that stops from making it look monotonous and boring. However, what’s more interesting is behind the side panel, below the seat. The electric scooter boasts of a 24-litre storage space that can swallow a full-face helmet. 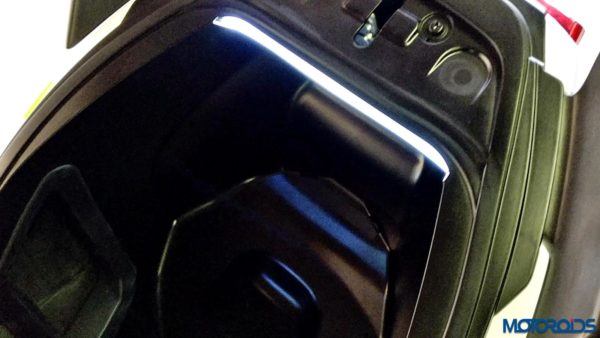 Finally, at the rear is a single piece pillion grabrail, a neatly designed LED tail light that is followed by LED blinkers that complete the design in the subtle, yet stylish way.

Overall, the built quality feels solid and except for the buttons on the scooter which look a little too small, there was nothing to complaint about. The team has put in a lot of thought into the scooter and it’s the small things that make the Ather 450 near perfect. The LED headlight, for example, is aimed to provide better illumination without drawing a lot of energy. Then there are the self-cancelling LED turn indicators which help to save some more power. 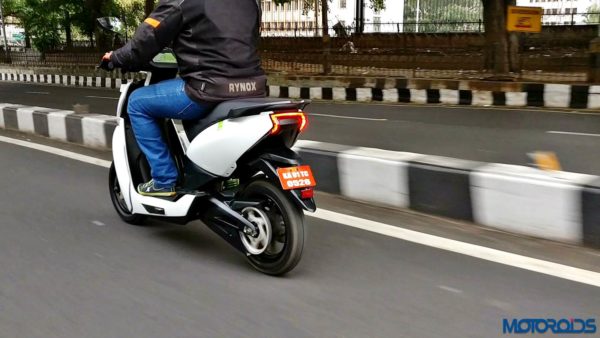 There’s also a lower version, christened Ather 340, which is identical to the Ather 450 in terms of looks but features lower performance numbers. The technical specification sheet post the verdict segment will have all the data about the difference between the two scooters.

The Ather 450 is claimed to be equivalent to the 110cc to 125cc internal combustion scooters in the country. The Ather 450 has a peak power output of 5.4kW (7.24 hp) and a maximum torque of 20.5 Nm. Being an electric scooter, all that torque is available to you right from the go. In comparison (purely for representation), the Honda Activa 110 makes 8 PS of power and 8.8 Nm of torque while the Activa 125 delivers 8.8 PS of power and 10.54 Nm of torque.

But hey, it’s an electric scooter and so the battery will make it weigh a lot, wouldn’t it? 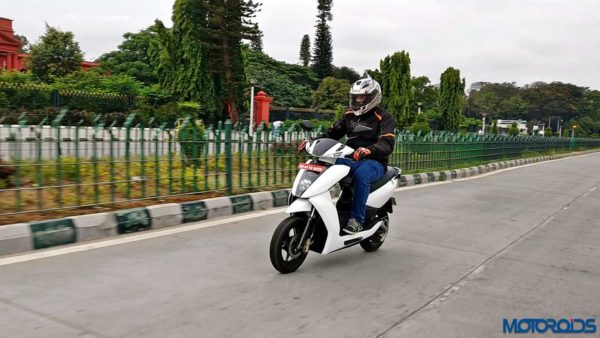 To answer that concern in one word, NO. The weight different isn’t gigantic as the Ather 450 uses a compact battery pack and tips the weighing scale at just 118 kg. Moreover, the battery pack is placed right below the footboard which gives it a lower centre of gravity. How do those numbers translate in real life? The Ather 450 is quick off the line, reaching naught to 40 kmph in just 3.9 seconds. The top speed is rated at 80 kmph but the scooter reaches that mark, and even crosses it with very little effort. The speedometer is claimed to have no percentage of error and thus what you see on the meter is what you get for real. The inclines aren’t the issue anymore either as the Ather 450 comes with a gradeability of 18 degrees.

You also get an “ECO” mode which cuts down the power and you wouldn’t see 80 kmph on the speedometer but, instead, you’d get an extended range – 15 kms to be precise on full charge. The onboard computer constantly studies your riding style, and your route to calculate the distance you can cover and notifies you if you need to recharge the battery. 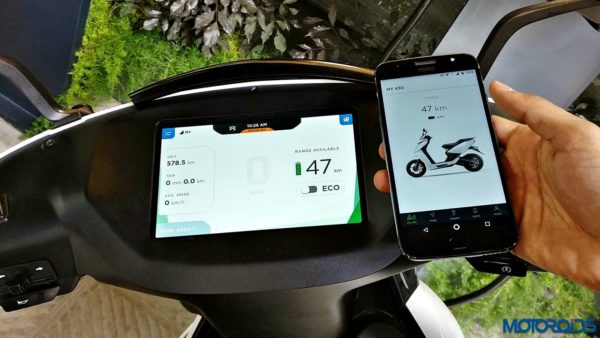 Charging the battery at home may take relatively long but at the Ather Grid charging stations, you can fast charge the scooter to 80% at a rate of 1 km/minute.

You also get a “Park Assist” feature that comes handy in the parking lot. The Park Assist helps you to move the scooter forward or behind using the power from the motor at limited speeds for more convenience. You can either slide the “Park Assist” tab on the touchscreen, or use the combination of brakes, ignition switch and the turn indicator to engage “Park Assist” mode. 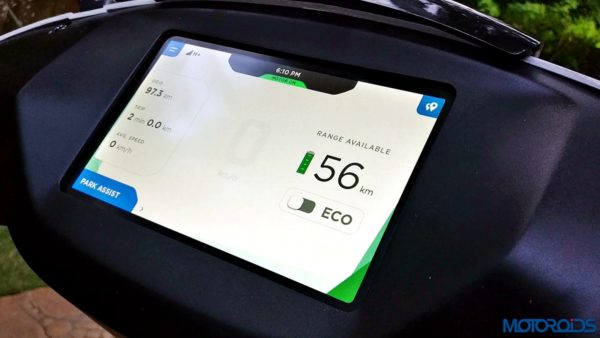 Then there’s the stopping power provided by disc brakes on both ends as standard. Upfront is a 200mm disc with a three pot calliper while at the rear is a 190mm unit with a single pot calliper. The response from the front isn’t very strong but together with rear brake, the scooter sheds speed swiftly. The safety net is further enhanced by the addition of CBS which comes as standard.

Suspension duties on the Ather 450 are performed by telescopic forks upfront, and a centrally mounted monoshock at the rear. The overall tuning is on the firm side and you’d feel most of the undulations that the scooter rides over. However, the stiffer suspension aids the handling department and you’d notice how agile the scooter feels around corners, or in traffic. The battery pack, as aforementioned, is placed below the footboard that results in a lower centre of gravity that further enhances the handling department. 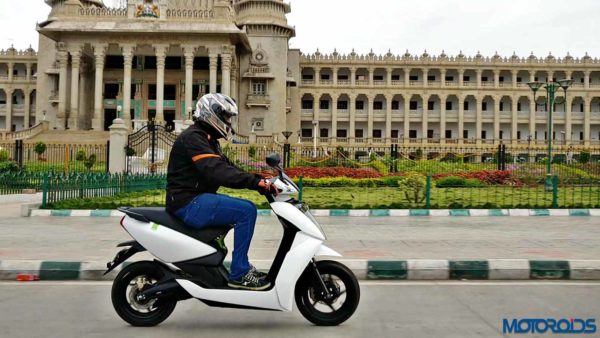 The comfort levels aren’t at par with something like the TVS Jupiter but it’s still comfier than many petrol powered scooters out there. A well-padded saddle does provide some solace. The footboard isn’t the widest that we’ve seen either, but it’s sufficiently long to accommodate my 5’9” height without knocking the knees into the front panel, or compromising on the pillion seat space. Even with two adults onboard, the Ather 450 feels spacious and comfortable for short city commutes.

To sum the entire experience, the Ather 450 is a major step-up from the existing electric scooters in the market. It’s a well-built package backed by healthy performance numbers, long list of features and a well spread charging network throughout the city. The 7-inch touchscreen and the smart features related to it make your ride experience even more convenient and if you’re someone who is looking for an electric scooter, the Ather 450 should be on top of your list. 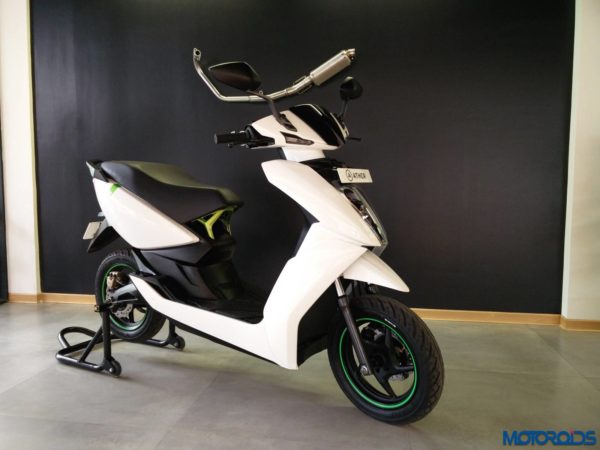 Sadly though, the Ather 450 (and the 340) is currently available in Bangalore only and if you belong to any other city of the country, you’d have to wait for some more time before you can bring home this electric smart scooter.

The price tag of INR 1,24,750 (on-road) for the Ather 450, however, is a tad too steep for the Indian pocket and sensibilities. That sticker price, by itself, is going to turn a large majority of potential buyers away. In Ather’s defense, however, they’re throwing in a lot of goodies for that price. For the stated price, you get free public and home charging, periodic maintenance inclusive of consumables, breakdown assistance and unlimited data services for the dashboard. Buyers can also opt for the Ather 340 which will be sold at INR 1,09,750 (on-road). 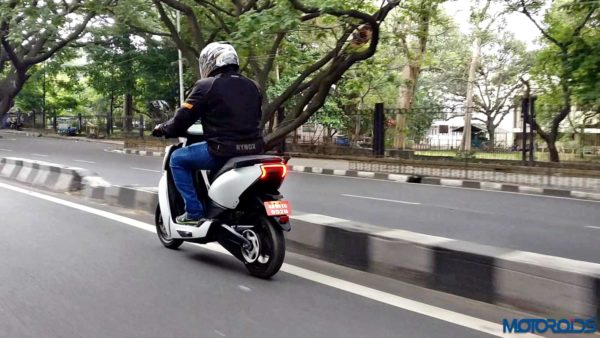 The company will also provide a home charging Point with the Ather 450 and a charging cable with the Ather electric scooter and the price of these products and their installation will be free for the first set of consumers. To continue to use the aforementioned benefits, you’d have to shell out INR 9,912 every year which is somewhat reasonable considering that’s all the money you will have to pay for your city commutes. The initial cost, however, is still quite steep, and that is the biggest drawback that this otherwise superb product has.

Check out the complete technical specification of the new Ather 340 and Ather 450 below:

Check out more images of the Ather 450 below: