Alright then, we are back from Bajaj’s test track in Chakan after a thrilling session with the 2017 KTM RC390, and we’re glad to tell you that there’s much to be excited about. Unlike what many would think, the new, 2017 RC390 isn’t just a cosmetic upgrade. Sure, it’s not an overhaul either, but KTM, thankfully has made the changes where it matters most. And if you could feel the changes made to a machine on a racetrack in a positive way, then, well, it most definitely was worth it. 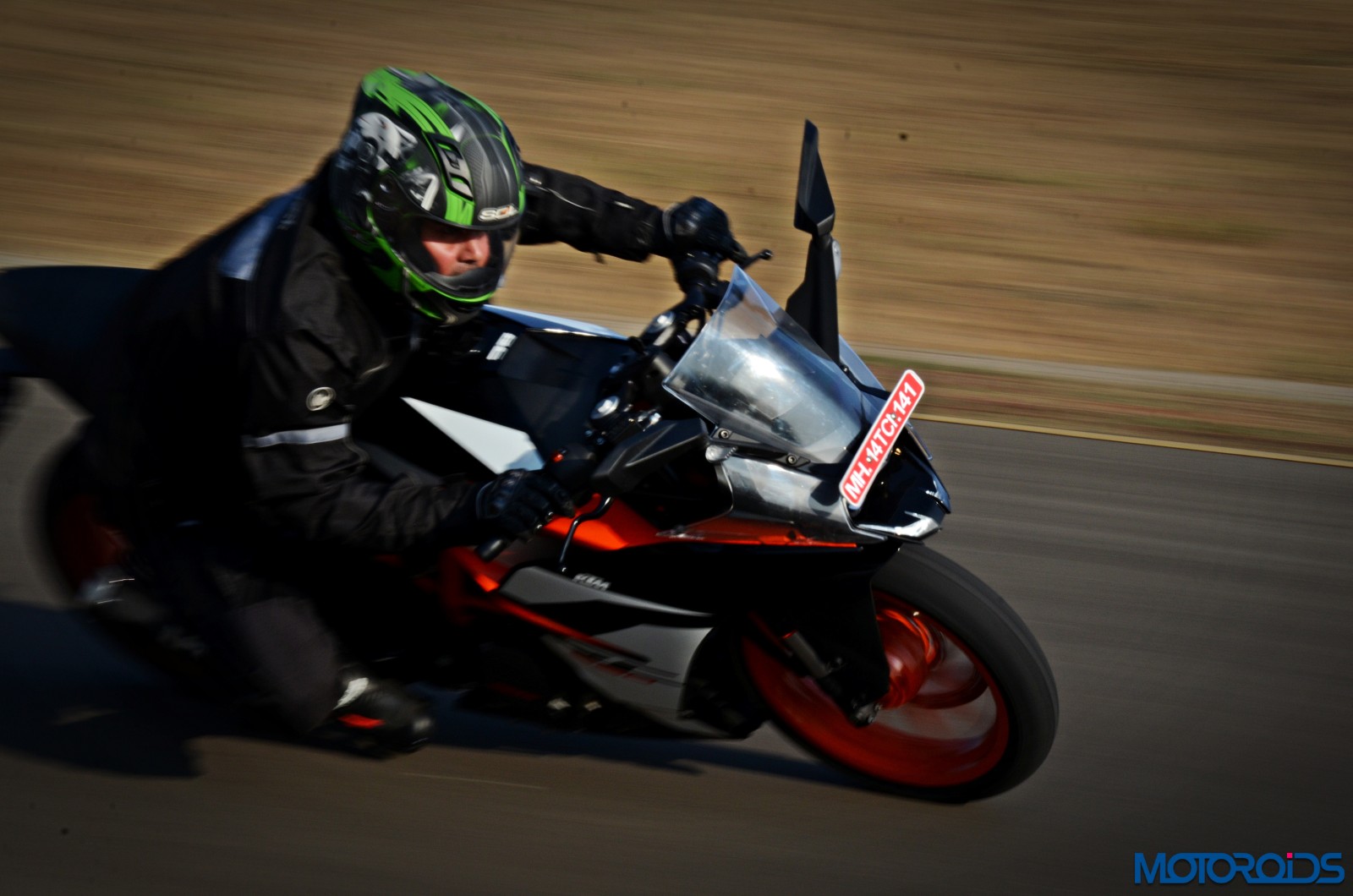 So without further ado, let’s get down to discussing all the changes made to the bike, along with what they feel like when you goad it around a test track relentlessly. Let’s start with the visual bits first. You can also have a look at our quick take on the bike in the video below 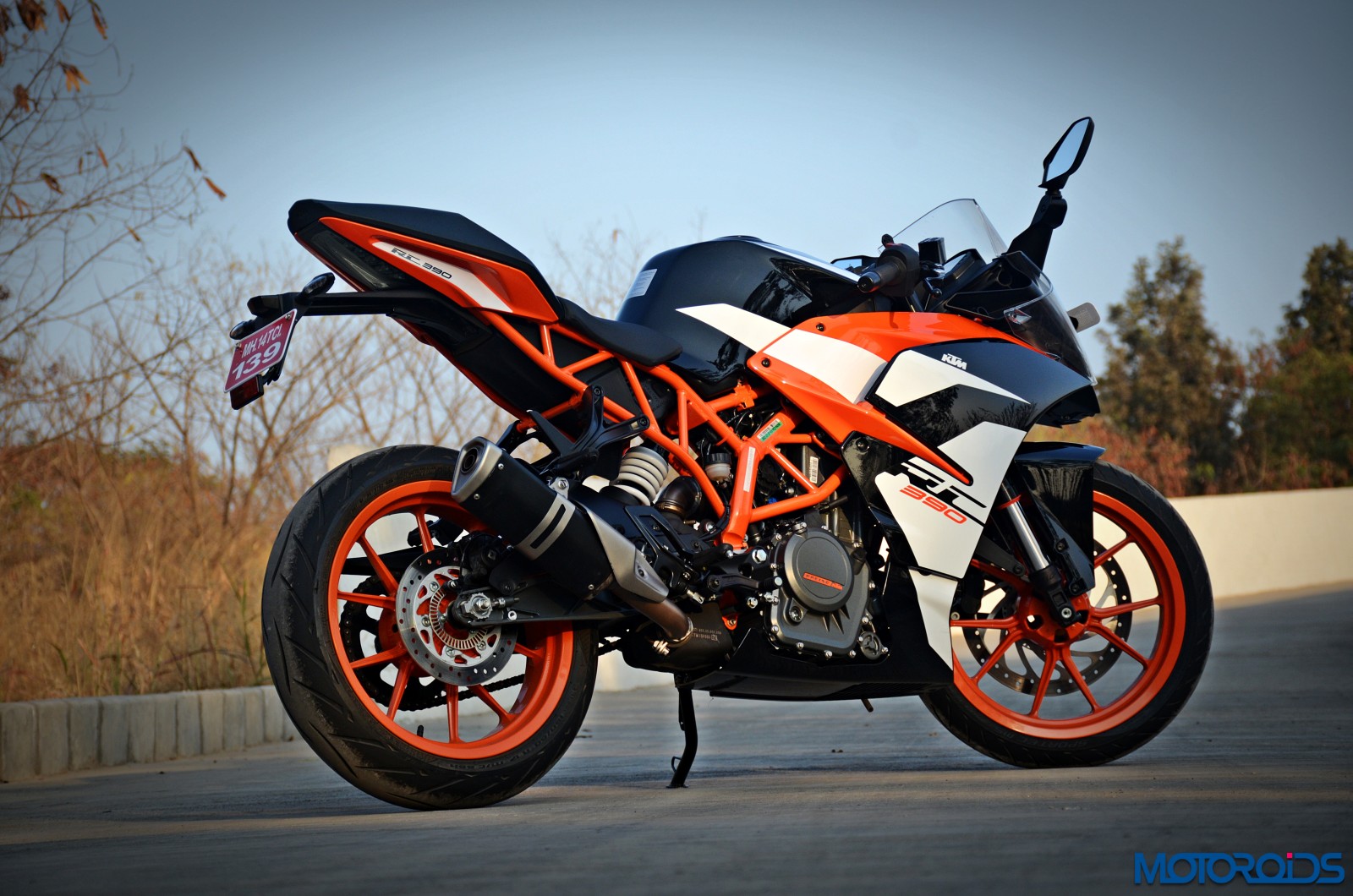 1. The bellypan : The shape of the bodywork on the bike has changed, thanks to the underbelly exhaust which has been deleted in favour of a side mounted unit. There are consequences of that change, too, but we will come that bit later. However, the bellypan that surrounded the earlier exhaust has now been restyled to go with the new side mounted system. It looks neater, smaller, is narrower and doesn’t scrape itself anymore even as you lean the bike at some ridiculous angles. Good news, as plenty of previous gen RC390 owners complained about the bodywork scraping with the tarmac earlier. 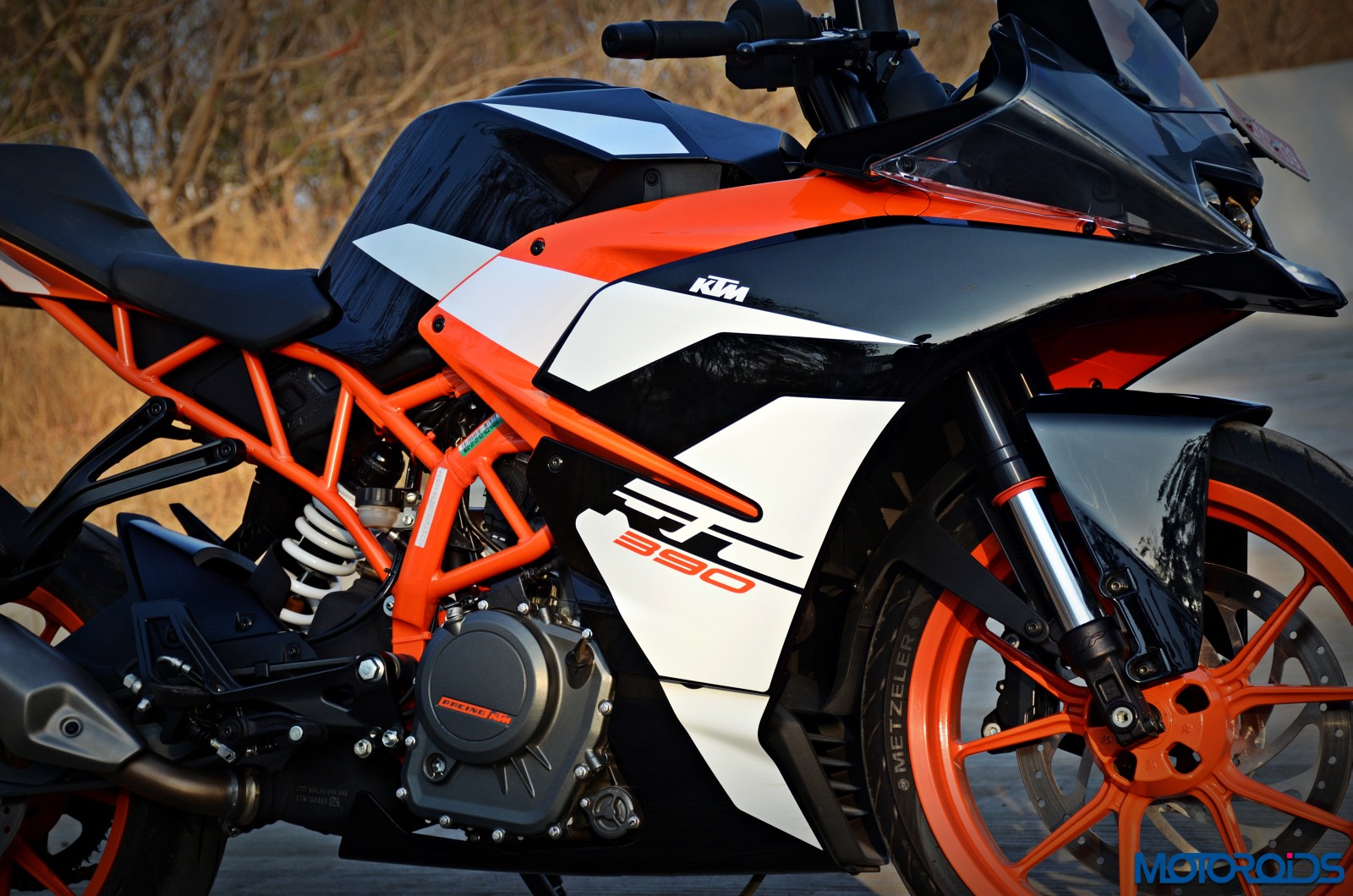 2. The paintjob : This is another very apparent bit, and we’d rather get done with it first before getting to the more technical details. The KTM RC390 gets a splattering of brand new graphics. KTM branding on the side panels has been reduced in size, the position of the RC 390 branding has also changed. But more importantly, the orange colour, representative of the brand, has also been altered. The new shade of orange, termed ‘Electric Orange’ has made its debut of the new RC390 and will also be seen on the KTM MotoGP bikes. The new paint is also supposed to be more durable and is more resistant to UV rays. Here, we are putting the images of the previous gen and current gen RC 390s side by side for a quick comparison 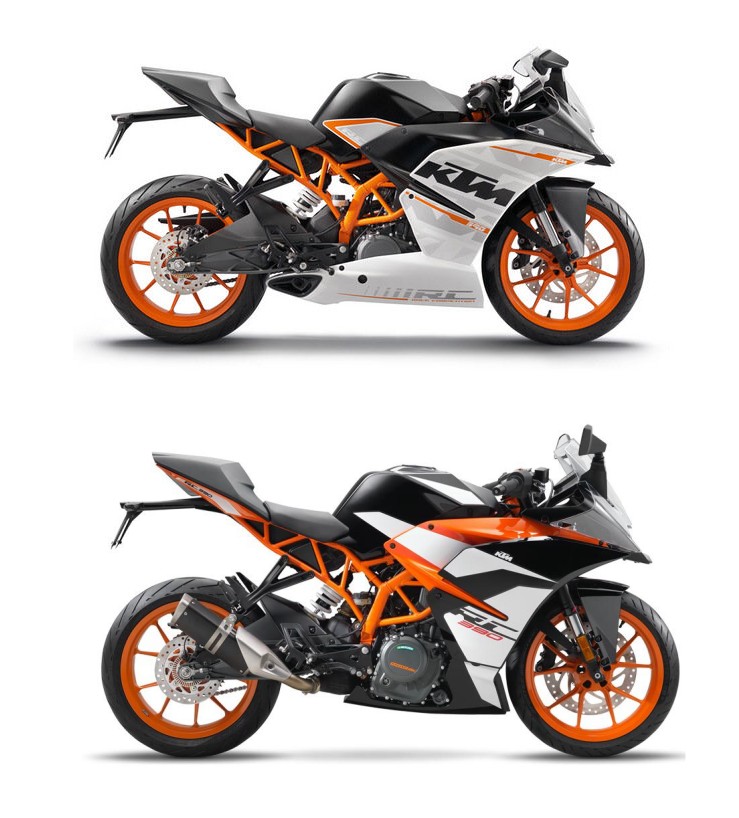 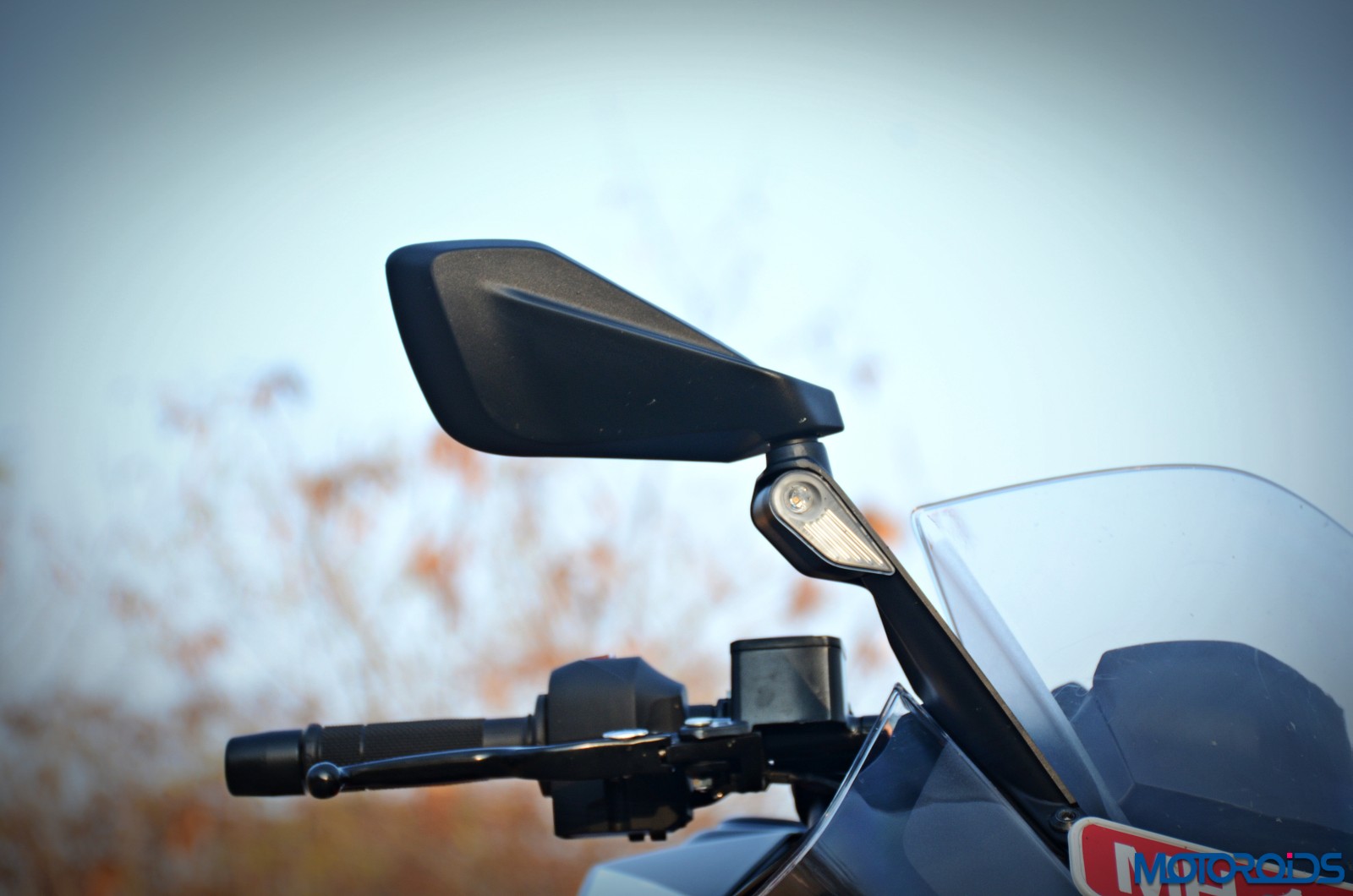 3. The mirrors : This one is a great change from a safety and practicality standpoint. The new RC390 gets wider mirrors which offer great visibility of the world behind you. We really don’t have to expand much on how important it is to have a functional set of mirrors on your bike, or how annoying it is when you don’t have them. So congrats to KTM for having brought about that change 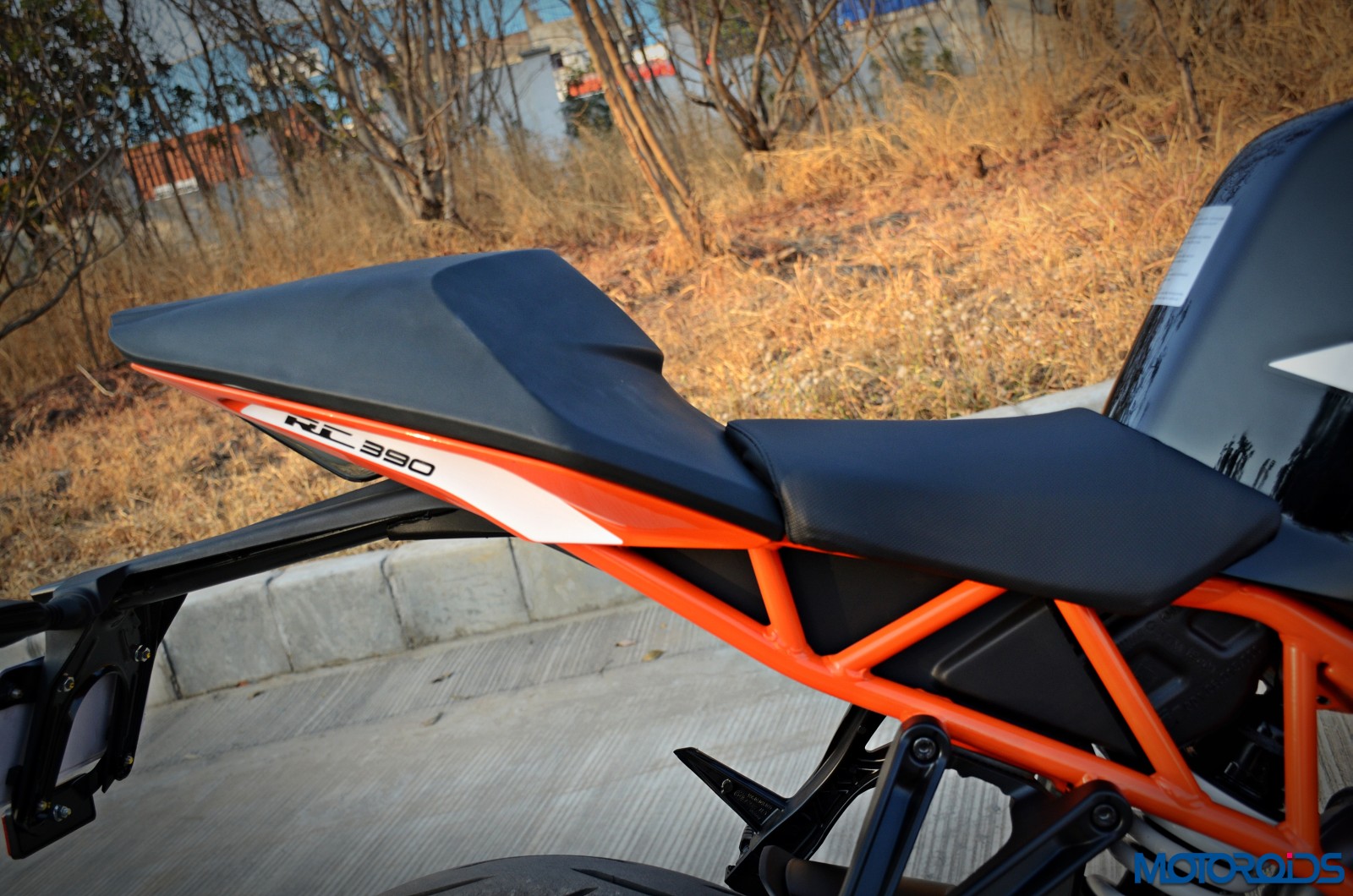 4. The seat : While the pillion seat remains unaltered, the 2017 RC390 gets a slightly cushier version of the rider seat with 12mm extra cushion. Again, a welcome change especially for those occasional longish rides. 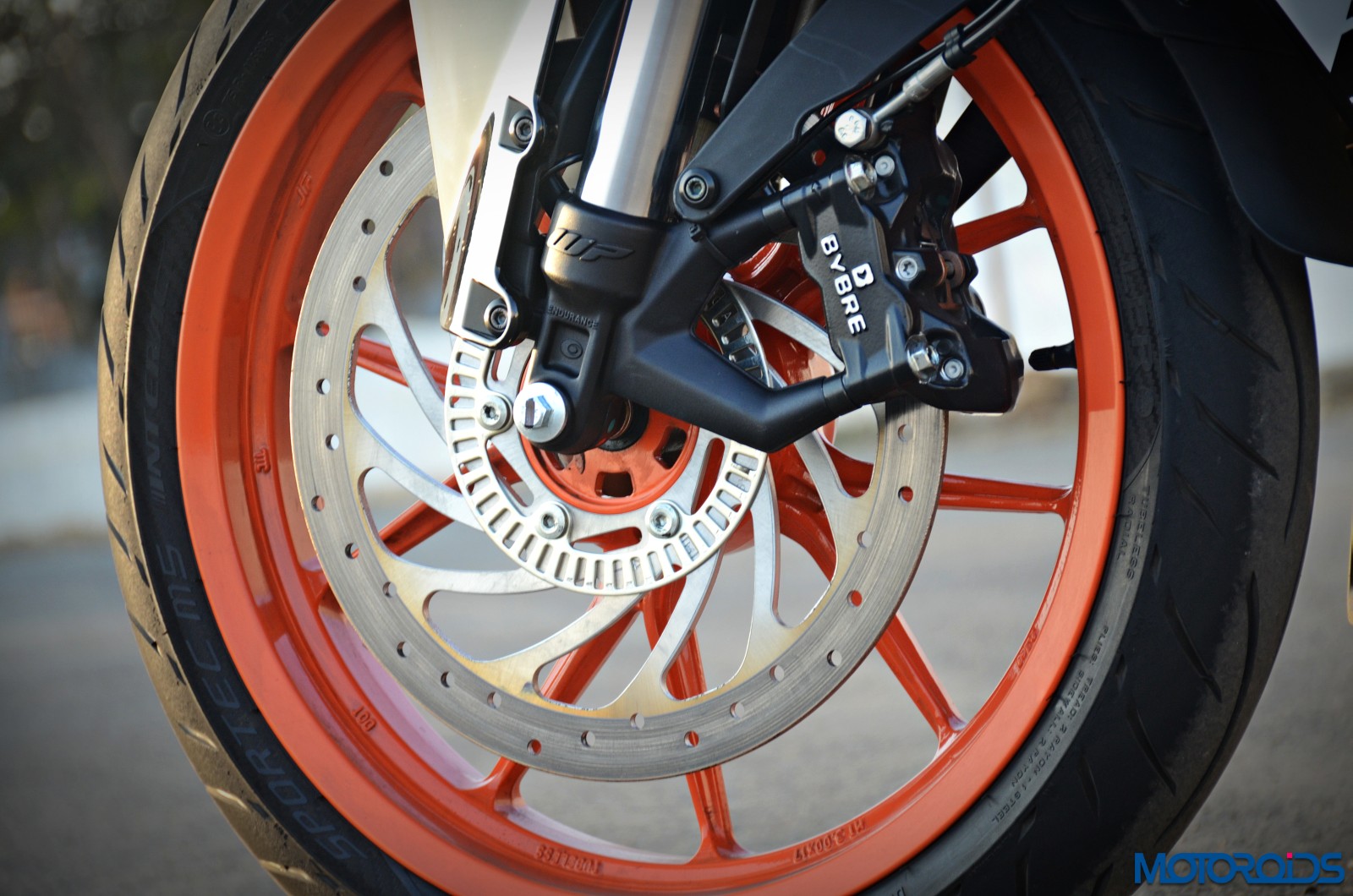 5. The brakes : The previous RC390 didn’t earn many brownie point for its brakes. Good to see that KTM has addressed the issue, and pretty well too. The new brakes are bigger by 20mm and now stand at a large 320mm. The stopping power has gone up significantly with the change, and the switchable ABS only makes it all the more effective. The somewhat wooden feel of the previous brakes has also been replaced with a sharp feel with much better feedback and margin for modulation than before. The new brakes have some serious bite and we loved how they allowed us to bring the speed down drastically from about 160 km/h in a jiffy, entering the corner after the backstraight. This also, helped us move our braking markers further ahead with confidence. This is a significant upgrade and every previous gen RC390 user would be able to feel it very clearly. Rear brake units remain the same. 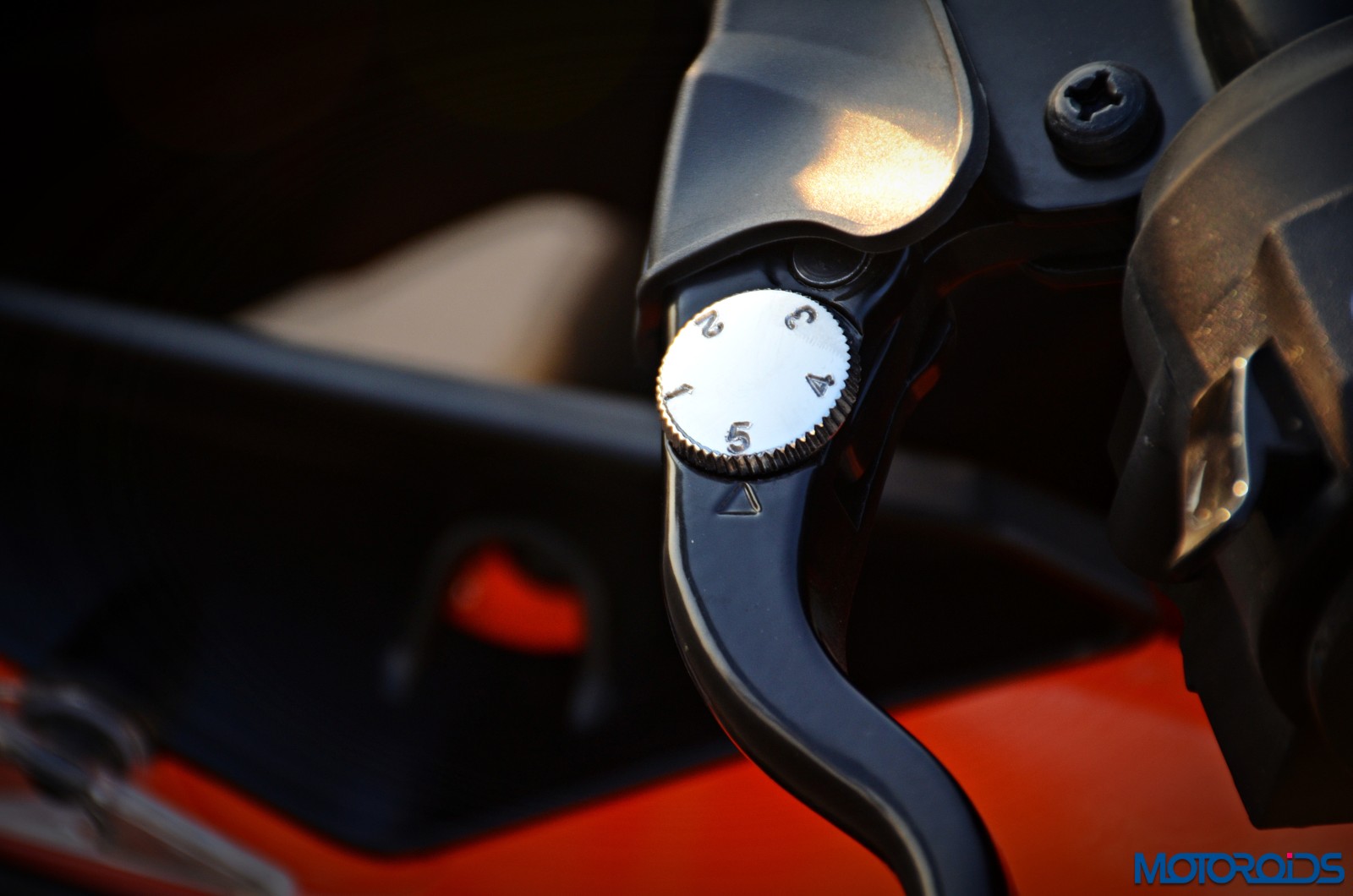 6. The levers : For your comfort, convenience and customizability, the 2017 RC 390 now comes with adjustable levers at both ends to suit your palm size and travel preference. Again, a great change, and makes a hell of a lot of difference for those who will use this bike on a day to day basis. 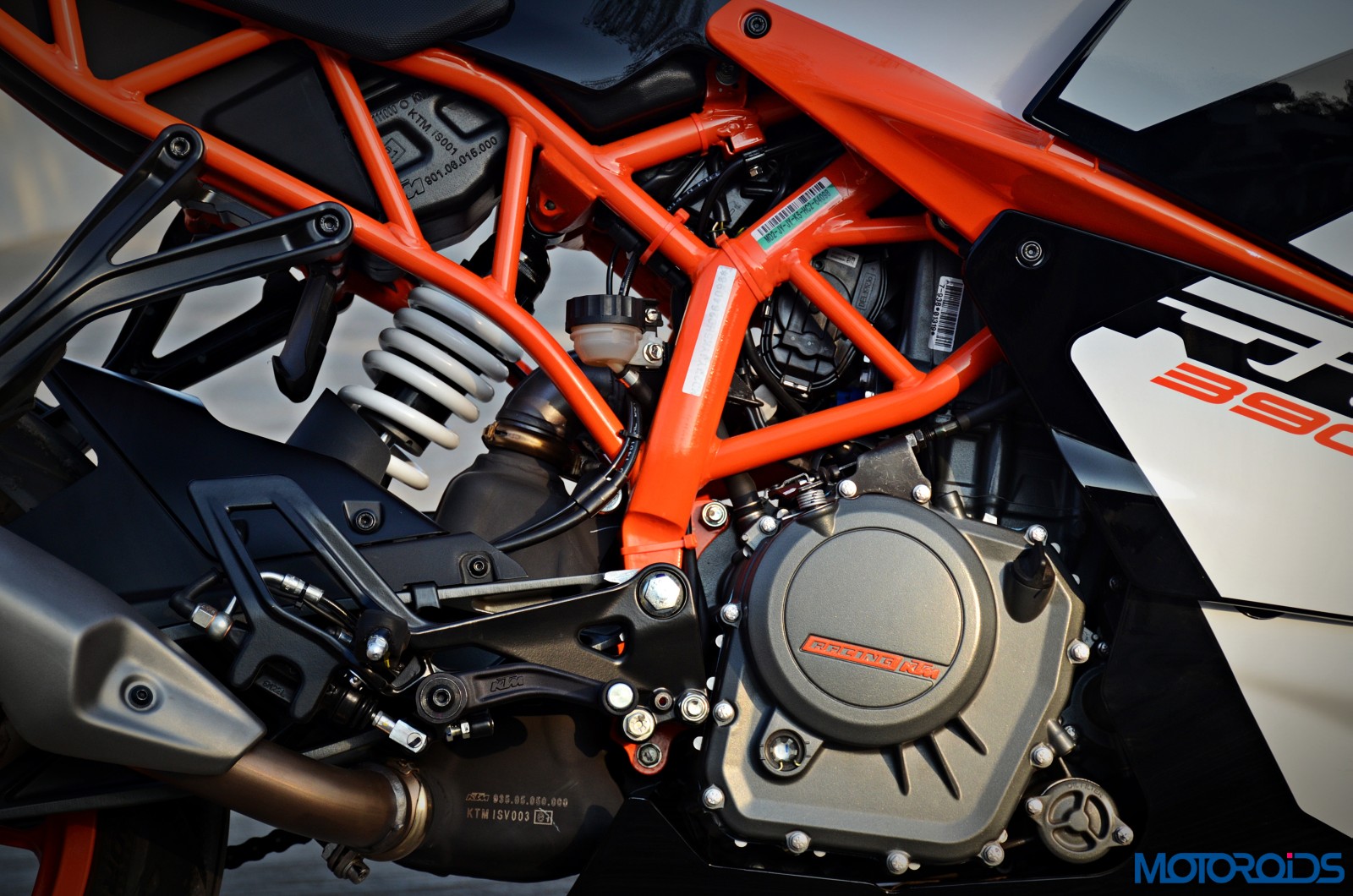 7. The ride-by-wire throttle : This one is probably the biggest change in the 2017 version. The cable that controlled the valves for fuelling has been replaced by sensors. Everything is now electronically controlled, which means quicker response to throttle inputs and more precise fuel delivery to the combustion chamber. We are happy to announce that this change can be experienced as clearly as it ever could be. The throttle spin has been reduced, so you have to wring it all that much gently. The response from the engine is instant and unlike a few other things (like heat dissipation) the track is just the right place to gauge this trait. We loved the precise, and crisp manner the motor responded to every little input on the right bar. It’s notable that while the throttle response is crisp, it’s also smooth and progressive – very well executed. One also needs to understand that the sensor based ride by wire system is like a foundation stone for the edifice of tech KTM plans to build on the future version of the bike. A whole array of software based tech like traction control and riding modes draw the information they need from the throttle inputs. So expect the future gen RC 390 to get a whole load of software to make it safer. In the meantime, though, the new ride-by-wire system works wonderfully well 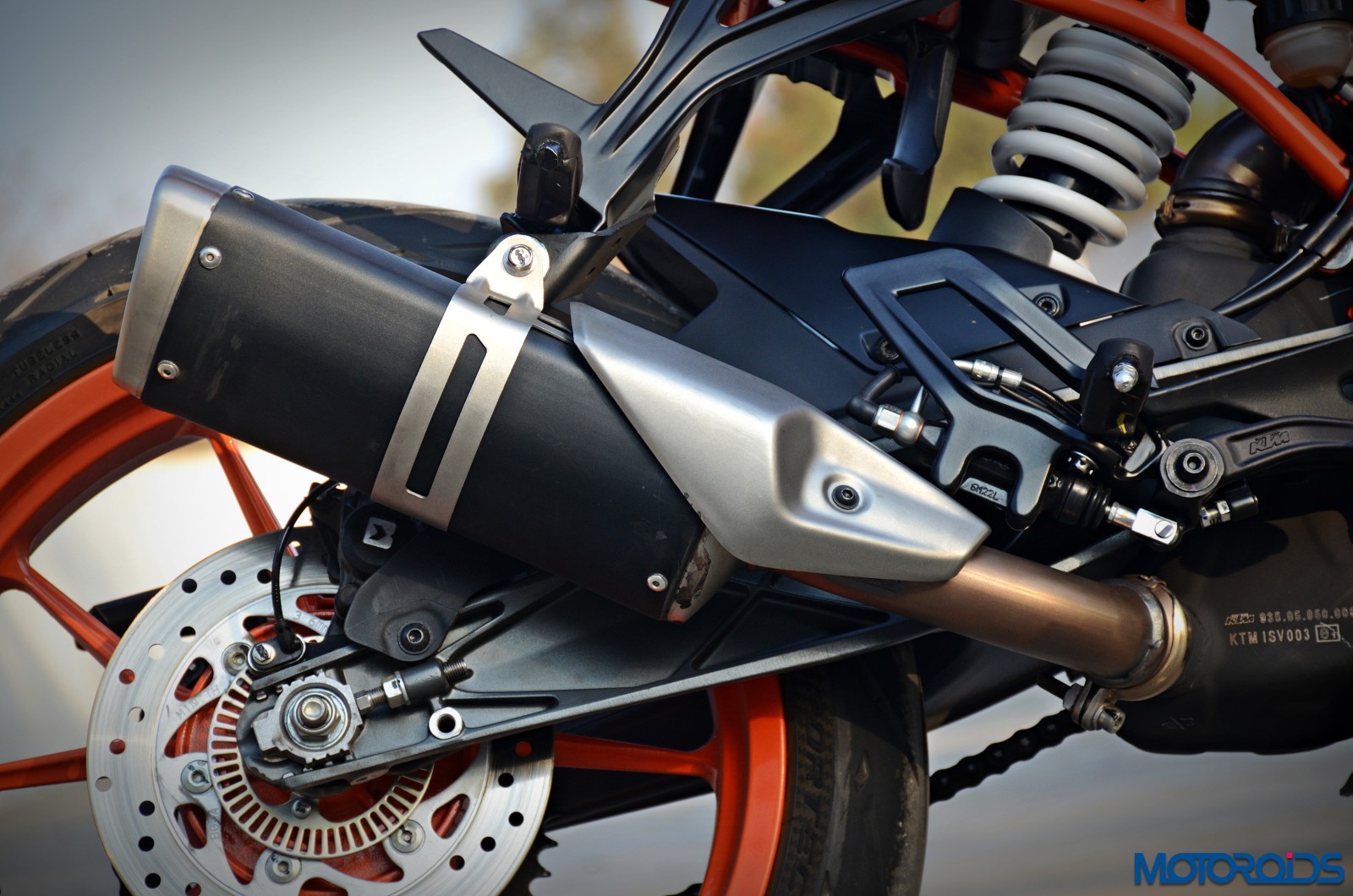 8. The exhaust : In a bid to make the bike Euro IV compliant, the exhaust has been moved to the side. It’s quieter at idle, and has a somewhat deeper, bass-ier note at full chat. However, it has made the bike heavier by about 6.5 kg. Also, the increased back pressure has led to an increment of 1 Nm in the torque output, although the power output remains exactly the same as before at 43.5 PS kicking in at 9000 revs. Does it affect the acceleration or handling of the bike in any way? Well, 6.5 kg is not a huge load of weight, and while it may (or may not) have affected the overall acceleration by an insignificant fraction, we couldn’t feel the change. Which, in a nutshell, means, you wouldn’t need to bother about it in the real world, as it didn’t bother us on the track, where such things are evident much more clearly. Has the handling been affected? A very unambiguous answer would be NO. If at all anything has changed, it’s that you don’t have to worry about that belly pan scraping with the tarmac when the bike is leaned over anymore 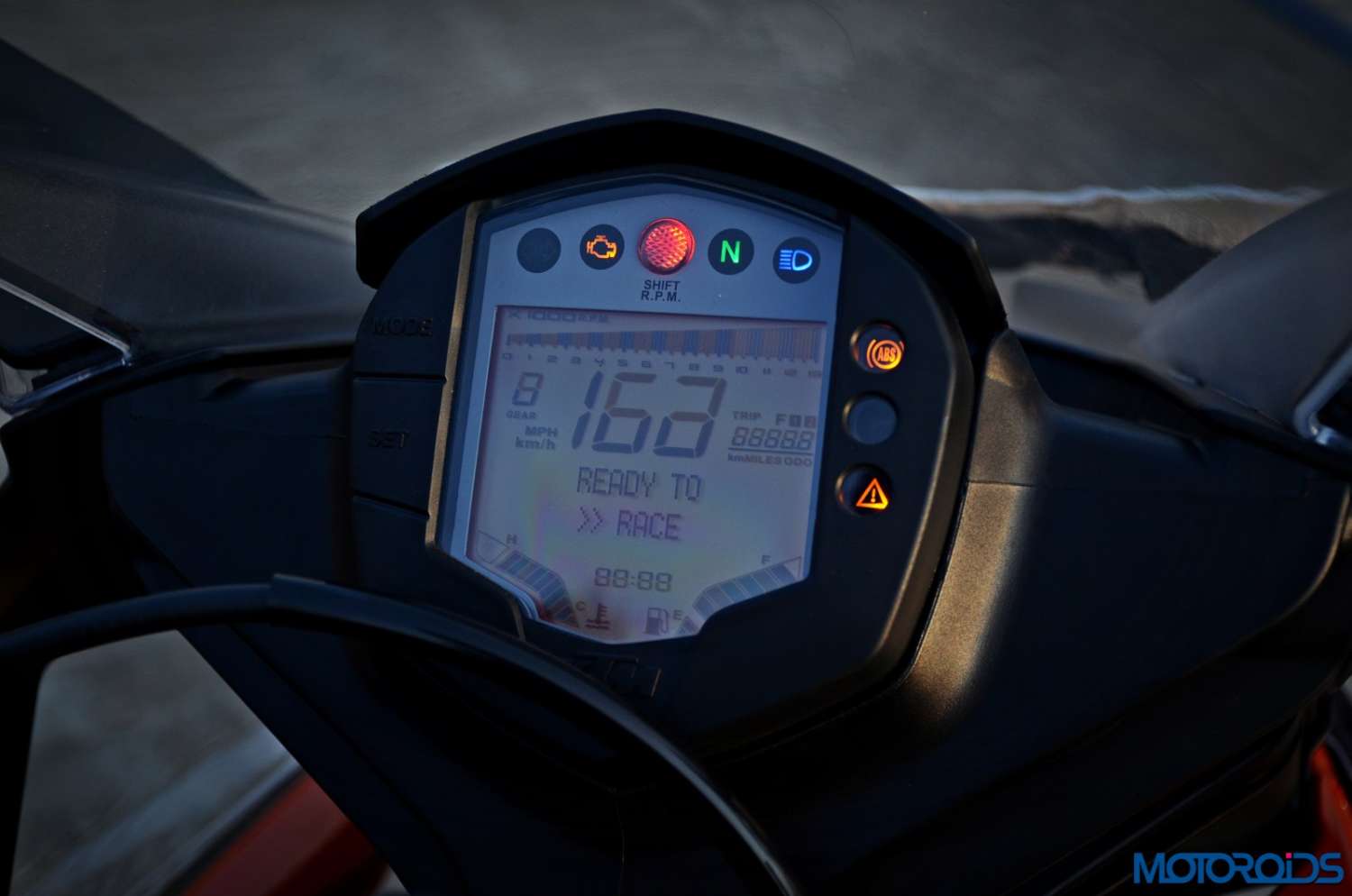 9. The instruments : The instrument cluster on the new RC390 now delivers some more information like instantaneous fuel efficiency 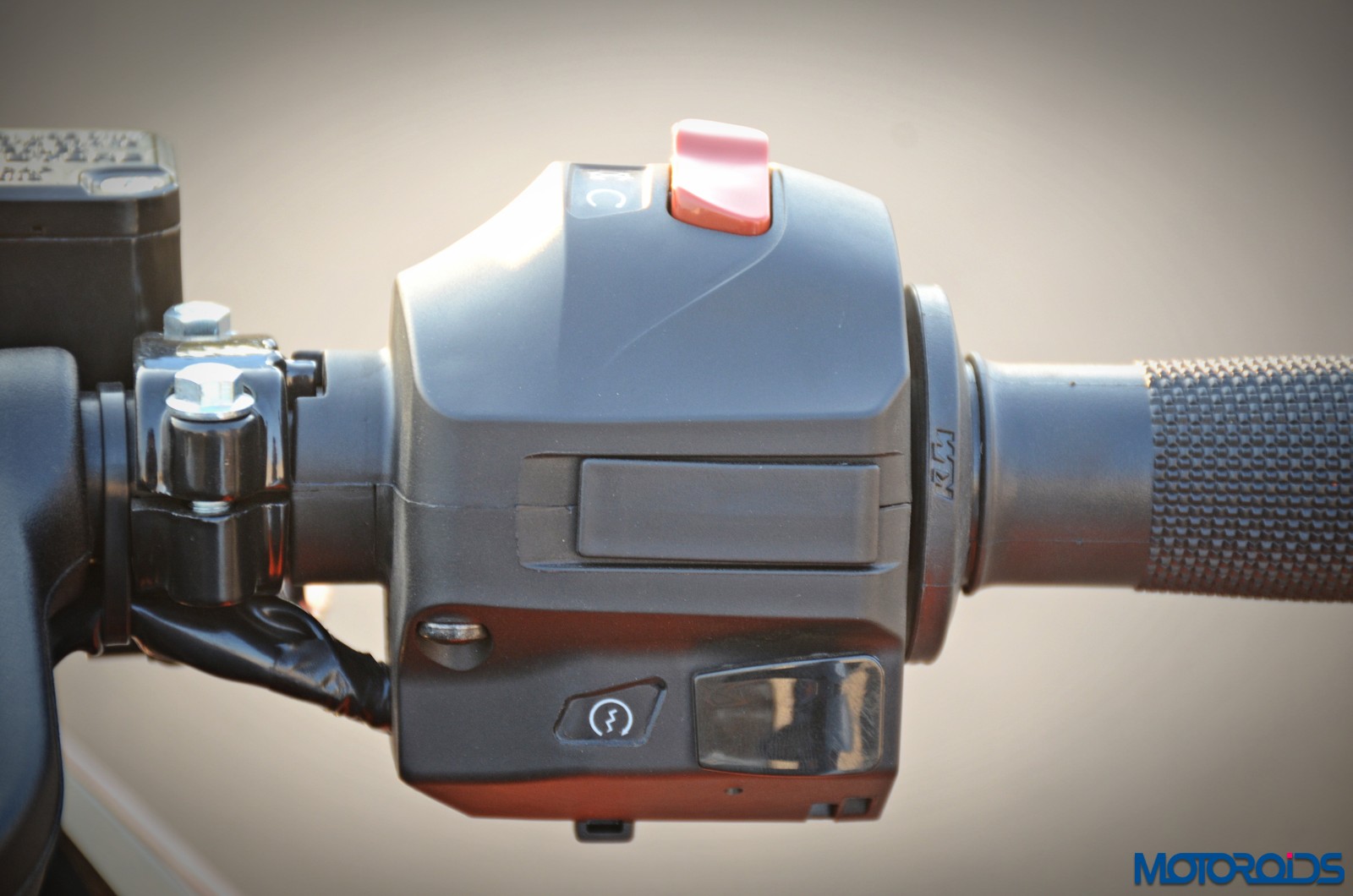 11. Heat dissipation : Well, with more than 10 laps in a row aboard the bike, with the throttle pinned almost all the way through, the engine had to heat up. However, at those speeds, you’d hardly ever feel the heat. We saw the temperature gauge short only of one bar, which meant that the engine was pretty hot. It ought to be, with that sort of treatment being meted out to it. Would it roast your loins as it did before when stuck in traffic? Well, we’ll really have to ride the bike in the real world to give you a conclusive word on that. Although we do feel that the heat dissipation has reduced, but we would still want to ride it on a hot day through a choked street to fully attest to that statement.

12. EVAP : There’s a new EVAP system on the RC 390 which is claimed to prevent vaporized fuel loss and thus improving efficiency very marginally

13. The CAN BUS : As a part of the all new ride-by-wire system is the Controller Area Network k.a. CAN has been introduced. A specialized internal communications network, the CAN interconnects components inside a vehicle to allow microcontrollers and devices to communicate with each other in applications. CAN bus allows a wide range of features to be implemented using software alone, making things less complex and more cost efficient while also reducing wiring. 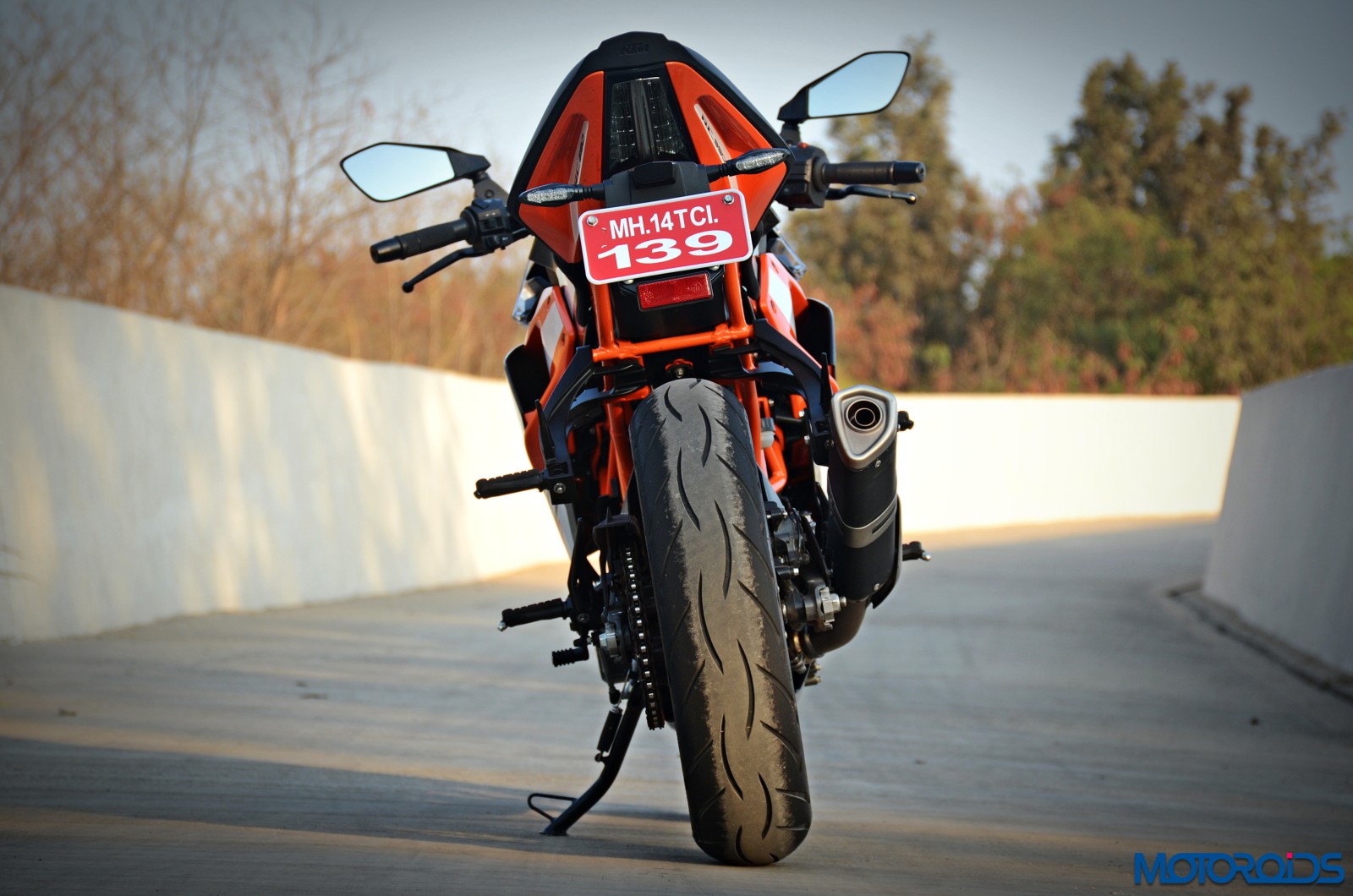 14. The tyres : The tyres on the bike remain the same as before – the trusty, grippy and dependable Metzelers – no surprises, no predicaments, plain dependable grip!

The RC390 remains as sharp as before in terms of its ability to carve its way through the racetrack. That engine is crazy as ever, hitting the limiter before you know it. In fact, it would take you by surprise if you lose your attention even for a moment, screaming its way to the top of its rev band before you could imagine. While it would kiss the redline even in the fifth gear in a reasonably good time, the sixth gear does take a while getting there. We saw a top speed of 158 km/h on the odo on the really long backstraight on the Bajaj test track. The bike feels light, extremely flickable – it’s a dream to hang off on both sides, and lean from side to side. 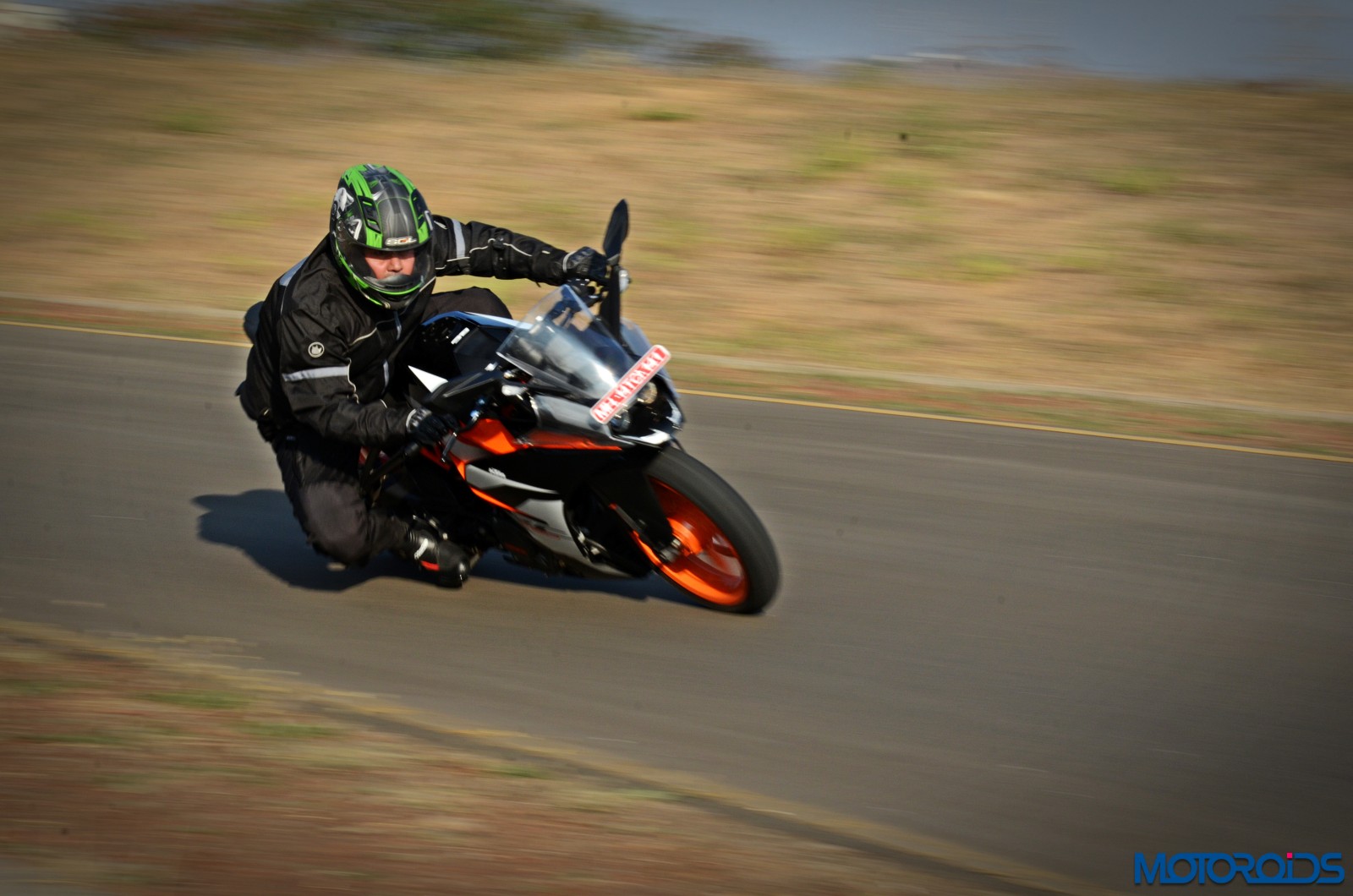 Also, thanks to all that firepower from the engine it does challenge the tyresa fair bit, though on a dry sunny day and on the immaculate track bitumen, those Metzelers performed brilliantly. I had two very, very mildly disquieting moments – one when I was powering out of the slower corners into the gentle S band that leads into the shorter straight of the track, I rolled off slightly, as I suspected the rear tyre to be showing a very vague hint of slippage. The other time, which is more a chassis-suspension related thing, I felt a mild wobble as I entered the U-turn bowl too hot and had to correct my line midway. But these were just very meek moments, far, far away from being dangerous or frightening.

As discussed before, the shiny new throttle response is a highlight on the new RC390 and the progressive, smooth nature in which the engine now responds to inputs, even with all its wild character is impressive. The vibrations have gone down a fair bit too. It was an enthralling day at the track, and the RC390 proved, why it is the definitive sportbike in the sub-3 lakh range. It’s a proper thrill monger with the right hardware and engineering to wipe doubt out of equation, even when ridden at the limit. 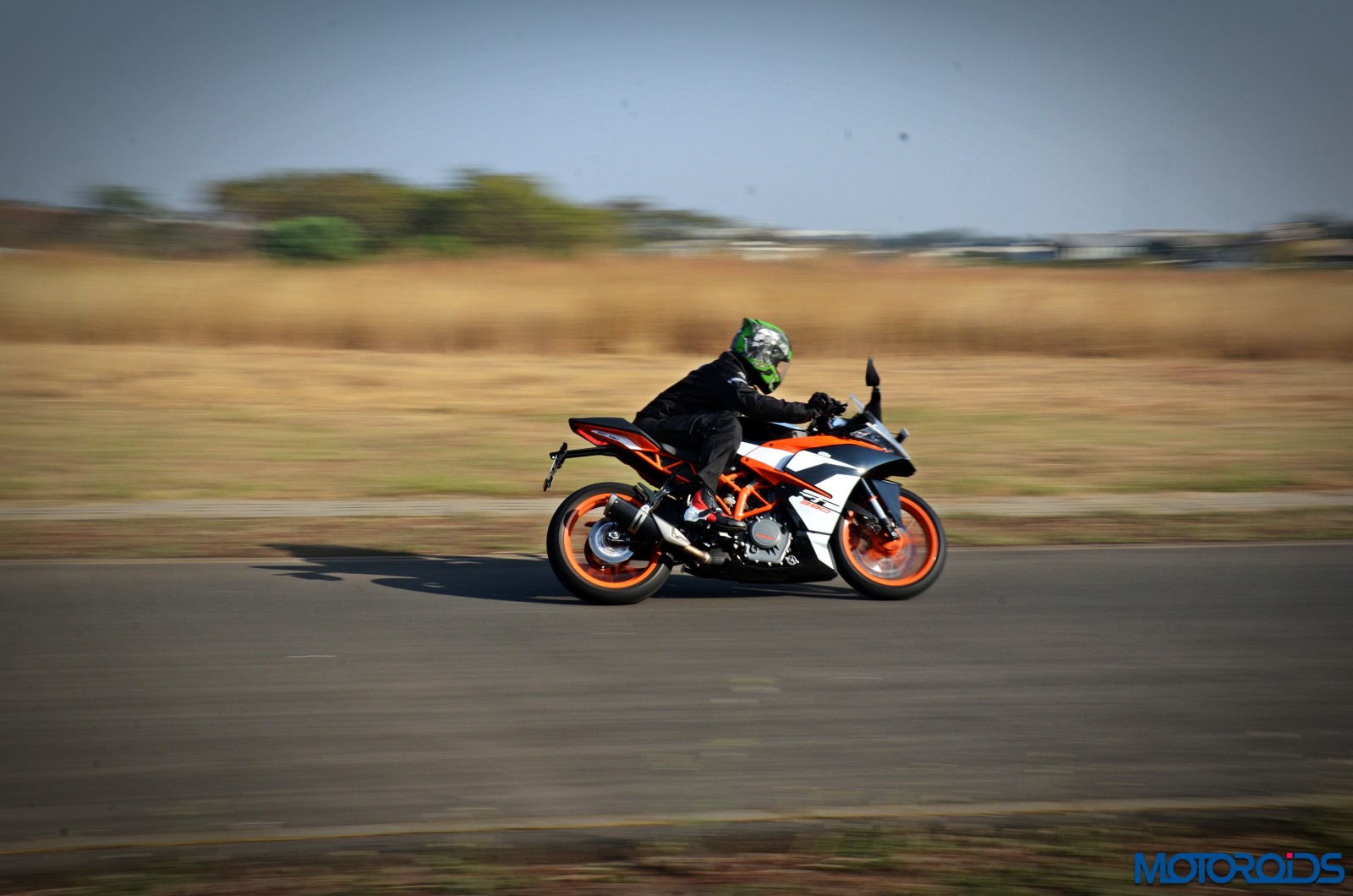 Lap after lap, I entered the corners more aggressively, powered out with a bit more vigour and kept braking deeper and deeper into corners. And not once did the bike feel as though it was gnarling or seething under me.

A premium of 11,500 rupees over the current gen bike bring the retail price of the new RC390 to 225,300 (ex-showroom Delhi), which is still terrific value for the kind of stuff this machine could do. Sure, you shouldn’t upgrade if you are an owner of the current gen bike as the next gen bike will be introduced in a little over a year’s time. But if you want an affordable machine that has all the firepower in an impeccably engineered package, this one is the thing to go for. This razor has just been honed a bit more for an even finer bleeding edge. 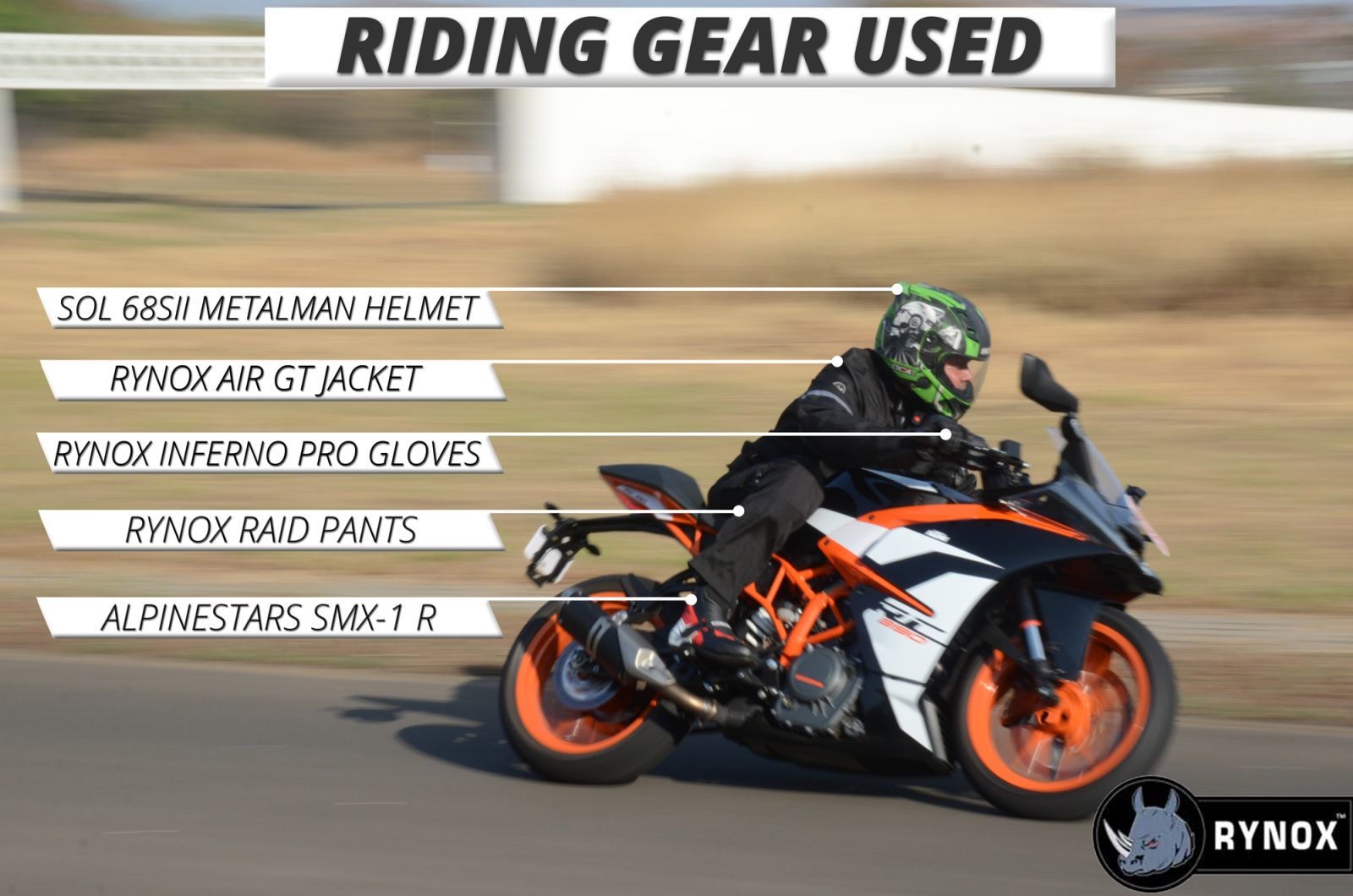