While the big news about the 2017 RC series was the 390, we also got a chance to sample the new 2017 RC200 at Bajaj Auto’s Chakan racetrack alongside its bigger brother. While no mechanical changes have been made to the RC200 for the 2017 version, it does get fresh new graphics along with a few other small changes. The bike continues to be powered by the 199.5 cc liquid-cooled powerplant good for 24.6 bhp and 19 Nm of torque. Let’s go through all the changes on the new RC200 one  by one, followed by a quick log of what it felt like around the track, especially after having ridden its more powerful and much improved bigger brother. Our first impression video of the RC390 (we did a Facebook live, hence vertical frame) is provided below for your reference 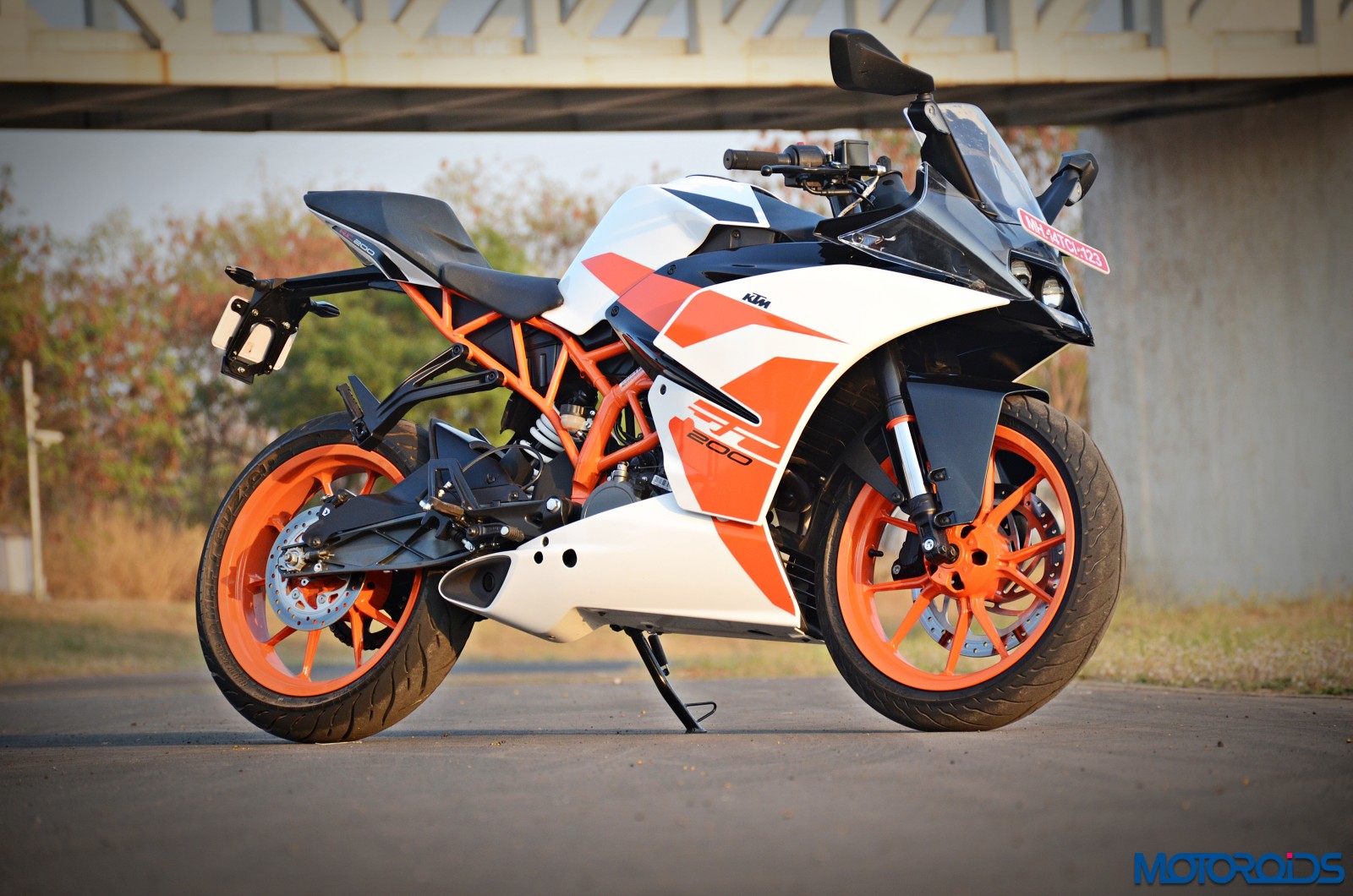 1. The graphics : for the 2017 version, the RC200 gets a fresh new splattering of colours which look much lighter than the darker hues of its predecessors. The predominantly white and orange colours on the bike has left a rather small amount of real estate for black, which is relegated only on the top of the tank, in a small measure on the fairing, on the fenders and on the area around the headlamps. In all honesty, the lighter shades on the bike come across as a gust of cool air and make it look really fresh and new. I personally like the new white and orange scheme over the one it replaces. Here we have put the images of the current and previous gen bikes side by side 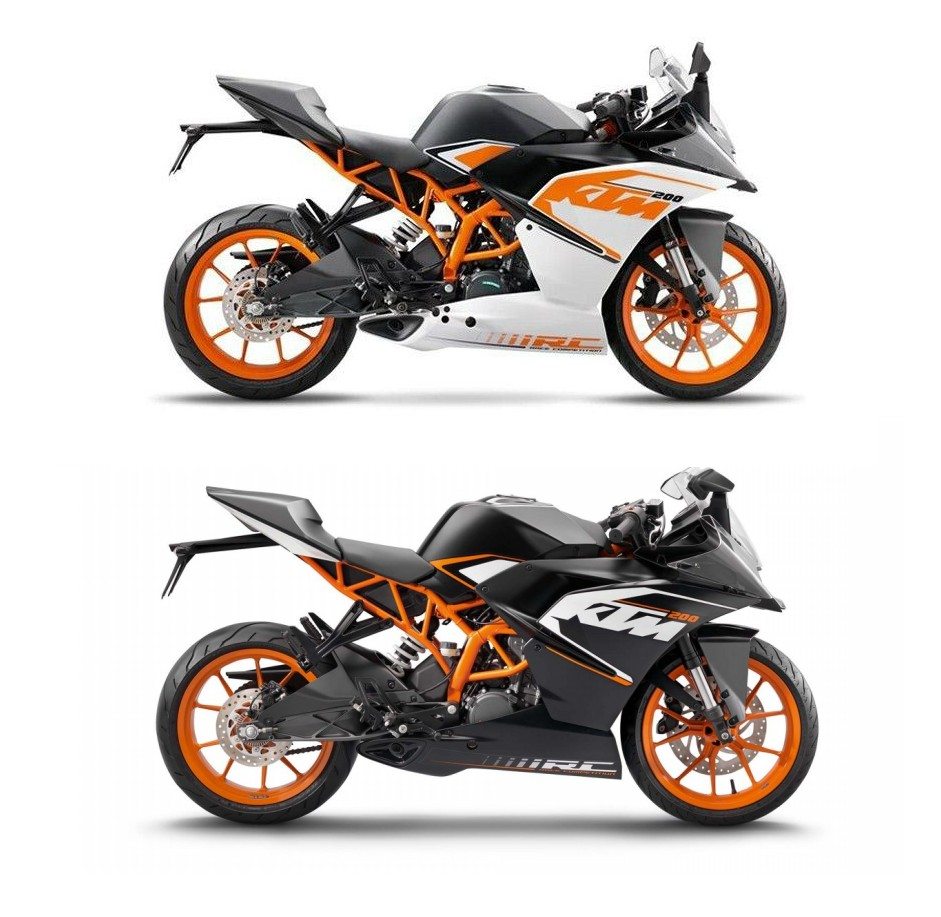 3. Wider RVMS: The RVMs, which are shared with the RC390, are wider on the RC200 as well, spelling more convenience and safety.

4. BS IV compliant: Thanks to the RC200’s smaller engine, the boffins at KTM were able to engineer BSIV compliance into the bike’s existing exhaust system. So, unlike the RC390, the RC200 retains its underbelly exhaust and does away with a possibly substantial price escalation too in the process. 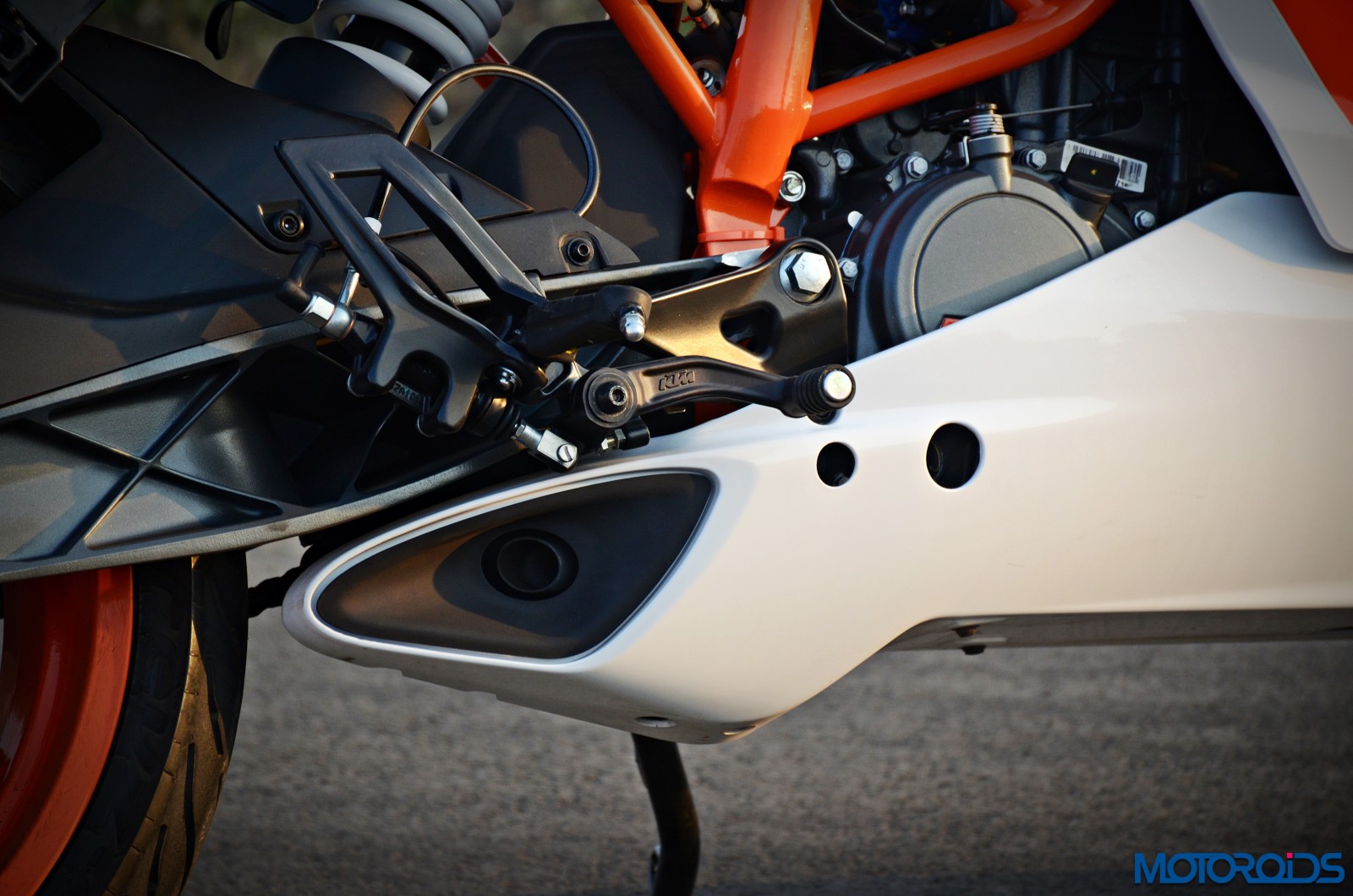 5. Instrument console: Again, as is the case with the RC390, the instrument panel gets updated and now shows real time fuel efficiency as well.

Since the RC200 doesn’t incorporate any significant mechanical changes, we spent lesser time with it and focused on the bigger 390 more. However, for the few laps we rode the baby RC after the 390, the differences were stark. 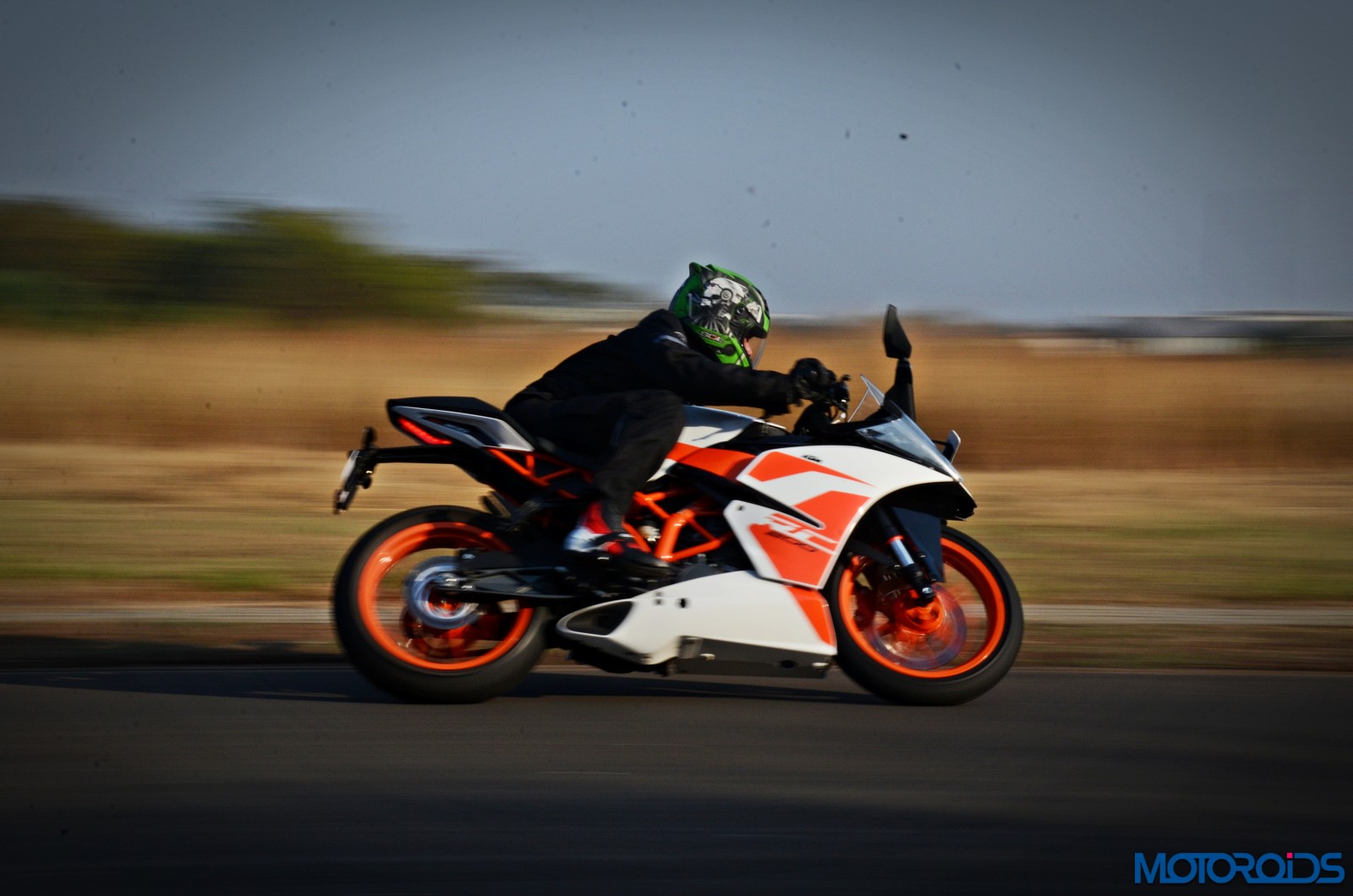 Being a lighter machine, and being significantly low on power too, the RC200 feels cutesy, almost like a little pup as compared to its raging, frothing sibling which is an adolescent hound.  The relative lack of power makes you get on the throttle with a lot more relentlessness, as the spectacular chassis and tyres are way too capable to handle what the little RC has to offer. The RC200 feels very observably nimbler and easier to guide. The turn-ins are much, much quicker owing to a variety of factors like lighter weight and lesser power. On gentler turns where I had to roll the throttle progressively on the 390, I whacked it open with disdain, and was often left wanting for more.

The engine’s propensity to rev is no lesser than its bigger sibling though, and it spins as rapidly to its redline, probably even faster to reach its upper limit rather quickly. We registered a top speed of 135km/h on the digital speedo on the backstraight, and I don’t think there was anything left in reserve.

It’s an amazingly effervescent engine, which would be an absolute hoot on the street, especially in the urbanscape, but here, on the test track, it’s limitations, especially under the shadow of the bigger RC390 were pretty evident. 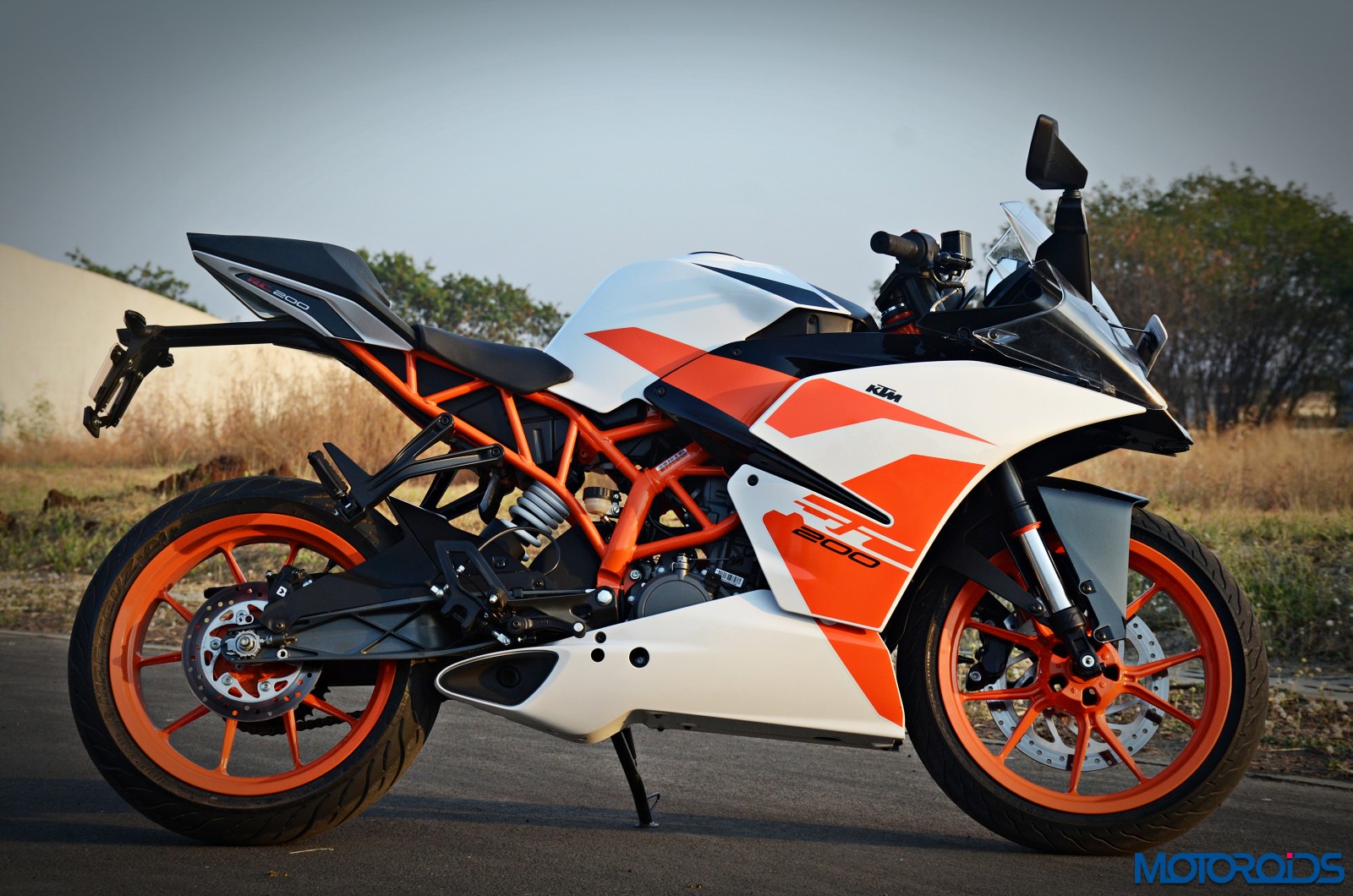 While chassis setup and the tyres are fab, the brakes here aren’t the updated ones, and it shows. The braking isn’t quite sharp enough, and you cannot drop the anchors as rapidly as you can with the bigger RC390. Throttle response isn’t as sweet either, though we’re complaining now only because we’ve tasted the 390’s poison with those 320mm discs.

Rs. 171,340 (ex-showroom Delhi), the new RC200 is about INR 5000 more expensive than the version it replaces. It remains a fine machine, which can be an absolute howl on the street owing to its free-revving character and solid engineering. It’s a very, very specific machine, though, for a very, very specific crowd. For those who aren’t looking for that razor sharp edge, though, a few other options have cropped up in the market of late. So while you wouldn’t go wrong the explosive RC390, this one here may just come across as a little expensive to some. 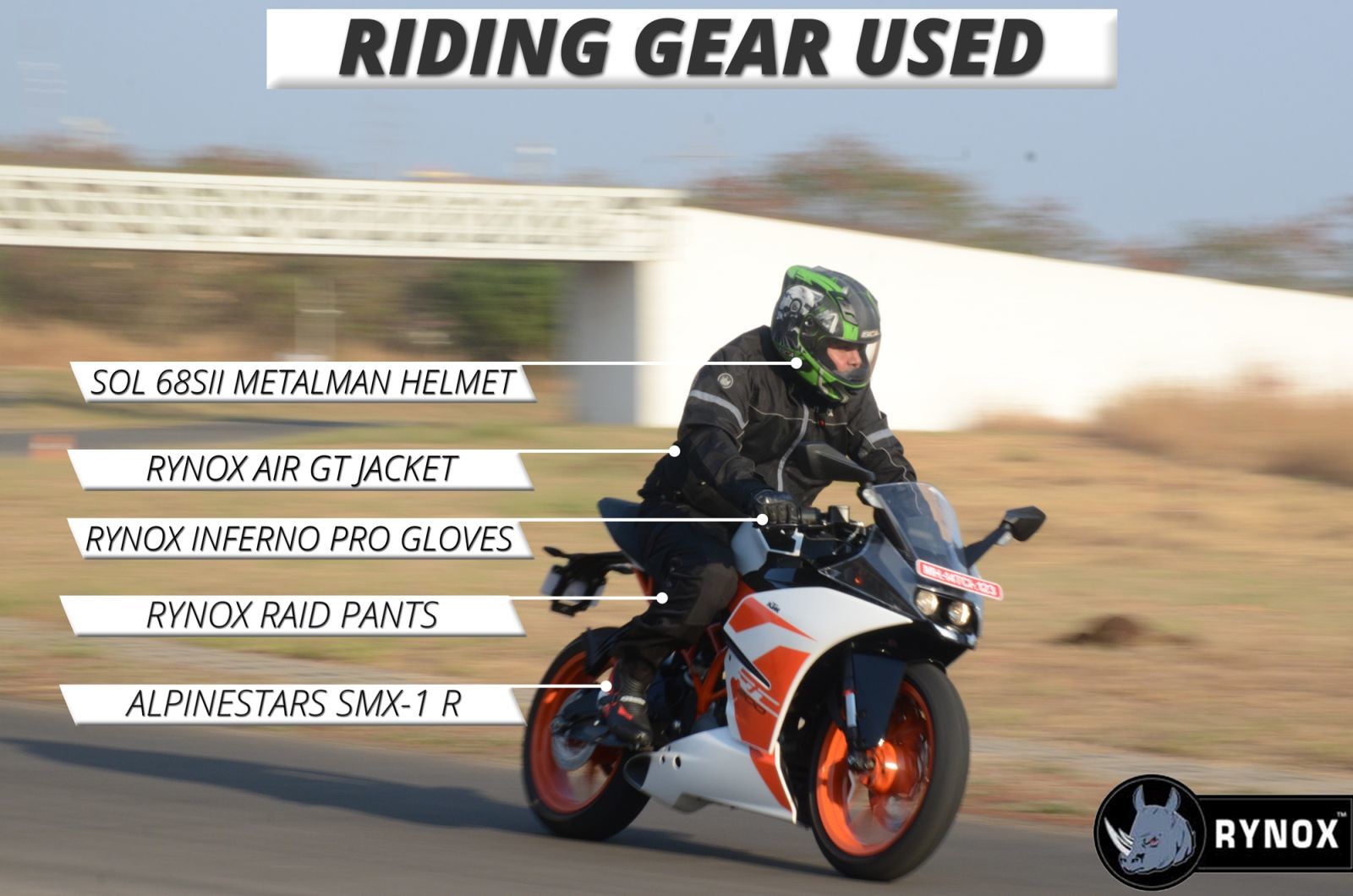