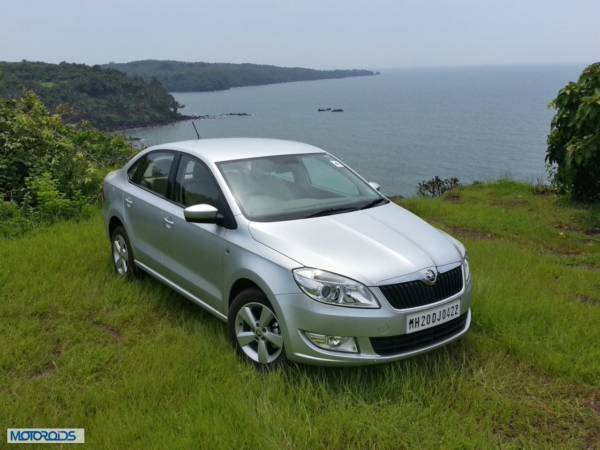 The Skoda Rapid refresh has been rather lazy on the outside, with the new version’s styling being an exact clone of the model it replaces except for the newly designed 15 inch alloys.  Lowly variants (Active, Ambition, Ambition Plus)  now get 15 inch steel wheels, as compared to the 14 inch ones before. The new 15 inch alloys (Elegance) look the part though, with a smart, chiseled design. If you haven’t noticed already, the Rapid is actually a Vento with a Skoda face, which isn’t a bad thing, but one misses the old Octavia’s classic shape, reeking solidity. The refined proportions and sophisticated lines lend the Rapid handsomeness which makes it a difficult car to not like. 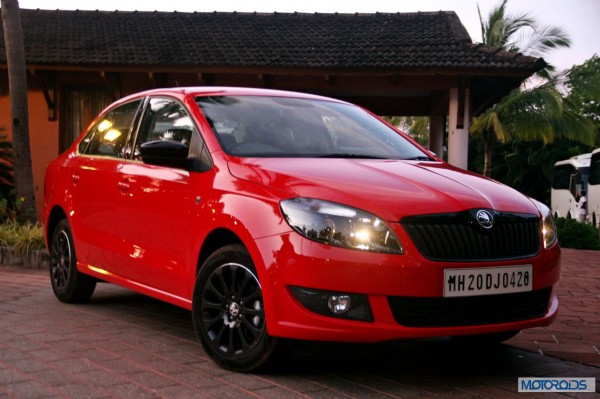 With the 2014 face-lift, there’s a new Black Edition Rapid also (above), which at Rs. 20,000 more, gets you smoked out headlamps, fog lamps with black surrounds, special 12 spoke black alloys, blacked-out grille and black ORVMs. That, along with the new “Flash Red” color scheme make the humble Skoda look positively wicked. 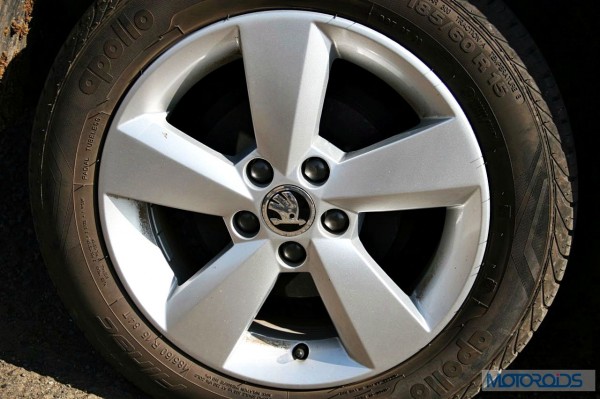 Sharp looking, new 15 inch alloys (Elegance)  are the only visual giveaways for the 2014 model; comes wrapped around with grippy Apollo Alnac rubber

The variable geometry turbine (VGT) version of the 1.5 TDI diesel engine, seen first on the VW Polo, replaces the 1.6 TDI power-plant on the Rapid. While the displacement has been reduced by 100cc, there has been no change in the power and torque output. Peak power is rated at 103bhp as before and is produced at 4400 rpm. Peak torque remains unchanged too at 250Nm between a wide rev-band of 1500-2500 rpm. While the newly introduced DSG box has been hogging all the limelight, there’s also the good old 5 speed manual box that can be had for the Rapid.

To read our exhaustive review of the 2014 Skoda Rapid 1.5 TDI DSG, click here

Everybody’s talking about DSGs. Here’s how a stick feels: 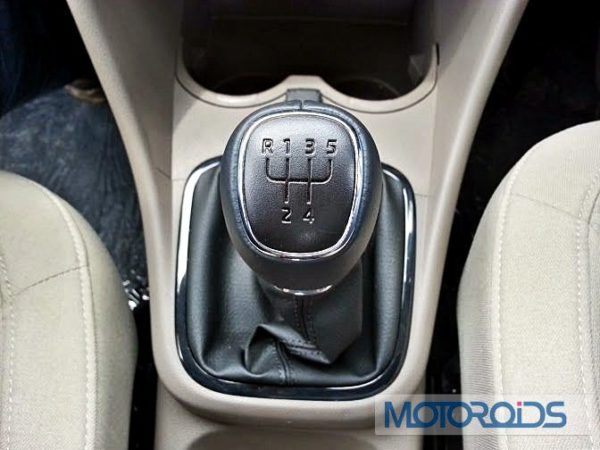 With all that torque chirping in quite low in the power-band, the manual transmission is a fine tool to rein all of those Newton Meters at you own pleasure.  Not that the DSG isn’t intuitive and predictable, but a stick is always more engaging. There is a perceptible lag, but that’s the how these turbo-diesels can be broadly characterized. Post 1800 clicks on the tachometer, the shove is quite enjoyable and playful. Even with a car loaded to the brim with humans and luggage, the Rapid’s strong power-plant packed quite a shove. As a tracking car for our Jaguar F-Type shoot, she tried to keep up as much as she could with that beautiful posterior. 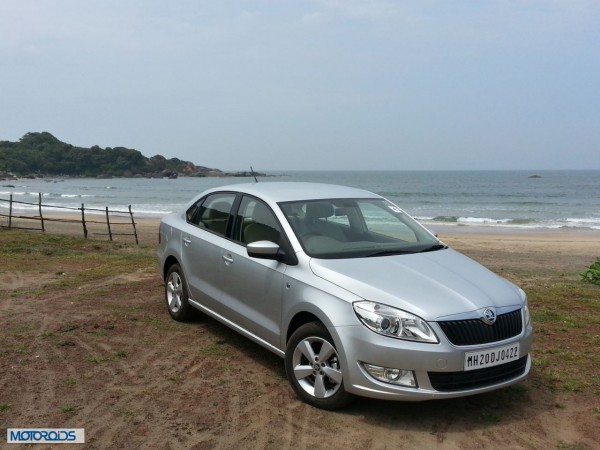 The slick-shifting 5 speed box, along with the somewhat light clutch makes sure that the motor can be beat within an inch of its life, though one needs to prod a little hard to shake off the laziness of the mill. But once it’s awake and singing, the familiar rush comes flooding and allows those quick overtaking maneuvers on the highways. The stick feels great to hold too, with subtle lashings of chrome. 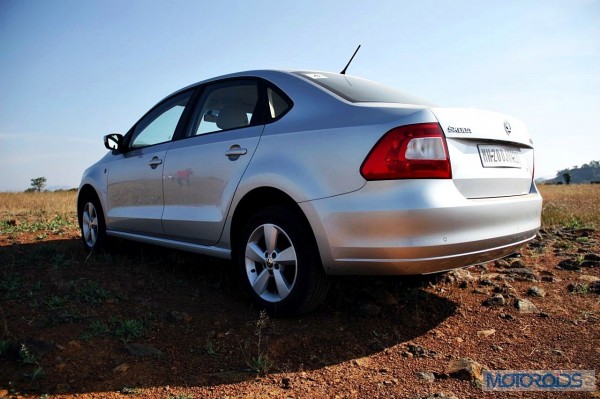 It’s a diesel, so refinement isn’t exactly its forte. While the clattering idle can be a bit annoying, the mill gets quite vocal beyond 3,000rpm, and, unlike the 1.6, it doesn’t feel as keen to rev hard, but goes all the way up to an optimistic (for a diesel) 5400 rpm. But with that bucket full of torque at your disposal, nobody seems to mind.  In the city though, the slightly abrupt power delivery makes its presence felt, but if you have already opted for the manual, that can be dealt with a bit of skilled footwork and is quite enjoyable. 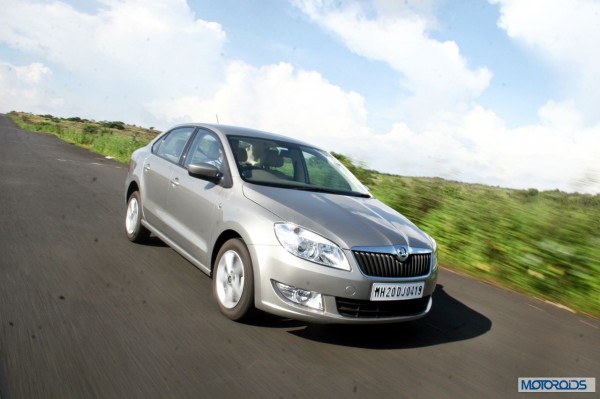 The dynamics of the Rapid are class-leading, with the car very eager to turn-in and hold its line around a relatively fast bend without much theatrics, in spite of the slightly less endowed Apolo Alnac rubber. The hydraulic power steering feels nicely weighed and great to hold, with just the right amount of feedback at low speeds. Even as speed climb, the steering holds it own, though it becomes slightly vague. It’s certainly one of the better ones around. The ride is supple enough and deals with undulations really well.

To read more in detail, click here for our exhaustive review of the 2014 Skoda Rapid 1.5 TDI DSG

Is it better than the DSG? 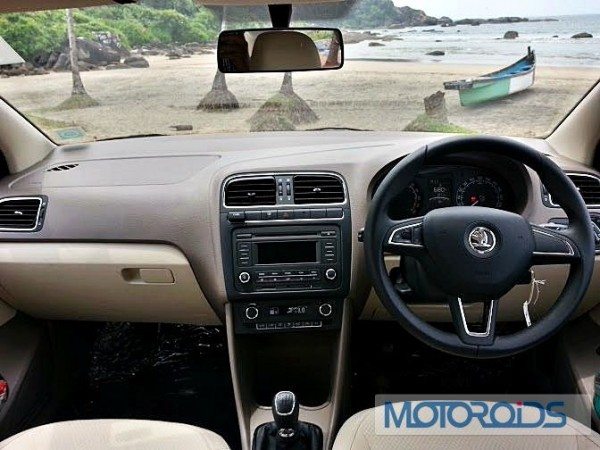 As a standalone car, the Rapid MT makes a pretty strong case for itself, but with the DSG in the fray, things are quite evenly matched (even the efficiency figures- at 21.14 kpl* for the manual and 21.66 kpl* for the DSG ), and ultimately boils down to your driving preferences. In spite of the DSG being an entertaining company for the driving experience, the manual, by all means, is more engaging. Apart from that, the DQ200 DSG box has reported some functional issues in Indian conditions, which, once happens will set you back by a fair margin, although the VW Group has promised that amends have been implemented.

If you’re one of the old-school types who don’t like life to be too complicated and find the recent rush of techno-wizardry in cars to be quite unnecessary, the manual Rapid is the one for you. Else, you’re pretty well off with the DSG Rapid, which, though dearer by almost 1 lakh INR, is worth every bit of it.