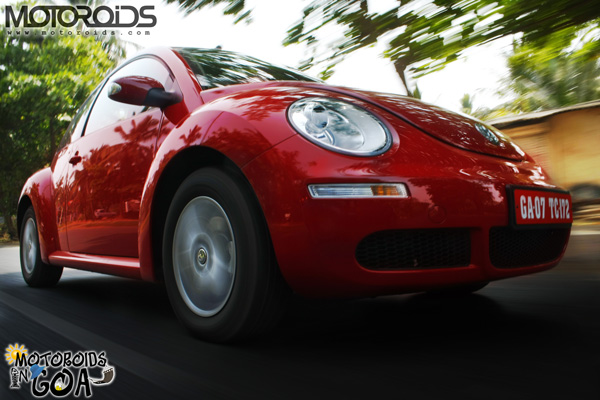 The Volkswagen Beetle is and always will be one of the most iconic cars in the history of the automobile. So iconic that it even gave birth to the name ‘Volkswagen’ (people’s car in German) and was also responsible in a way for how most Porsches have looked for the last sixty years. It’s been a popular car throughout most continents, no doubt. But one such country where the Beetle was particularly adored was Portugal. The Portuguese loved the car for its cute looks and its practicality as an everyday family car. In fact they loved it so much that they even brought the Beetle to India when they setup their colonies in Goa. Even today, finding hordes of yesteryear Beetles is the nooks and corners of Goa isn’t a Herculean task. In fact while testing the Honda DN-01, we saw so many models of this bug in Goa that for a moment we thought that we were a bunch of entomologists roaming around in the rain forest! And that’s when we decided that if we had to test the new Beetle, it wouldn’t be in Pune or Mumbai, but Goa itself…

Thanks to our Motorep Nikhil Pereira, the Volkswagen showroom in Panjim agreed to give us a Beetle for a day in whichever choice of colour we wanted. After looking at the Blue, Black, Yellow and Red colours in flesh, we decided to borrow the red car for our test. The colour not only looked more vibrant than the others, but it also gelled well with the high spirited atmosphere of Goa.

With its lustrous finish highlighting all the curves of the Bettle, the car looked like big sweet candy trotting along the open, old-school roads of Panjim. Since its introduction in 1938, very little has changed in the Bettle’s silhouette and it still keeps the charm and distinctiveness of the original alive even in its 21st century form. The roundness and the curves are everywhere – from the headlights and taillights to the sweeping wheel arches and the shape of the roof top and windows. Its two door design further adds to the distinctive character when compared to the other models in our market.

But while the exteriors stay abreast with the retro styling, the interiors are let down. I won’t say they are ill designed or cheap; instead they are too modern and sophisticated for a car so retro and flamboyant. There is a small tube sticking out of the dashboard which acts a ‘flower holder’. This novel addition, a few roundish bulges over the A/C vents and body coloured exposed metal surrounds around the door switches, try their level best to add the retro touch to the interiors, but in vain. The dashboard and the seat fabric looks as if came straight out of a new generation Skoda Octavia or a Volkswagen Golf. Too bland for the Beetle but a perfect design for a continent that thinks fish-n-chips are TASTY!

There are some decent creature comforts in here – like a 6-CD changer (audio CDs only), a single-disc MP3 player, climate control, height adjustment for the front seats etc. But even with a six-speaker layout the audio quality is mediocre and the dashboard integration for the entertainment-unit will make aftermarket fitment a cumbersome affair.

When Adolf Hitler commissioned Ferdinand Porsche to design the ideal people’s car, he wanted the car to seat two adults and three children comfortably while managing speeds of 100 km/h. Thanks to today’s technology, the new Beetle can do much better speeds while maintaining the comfort, but the criteria of the ideal occupants still remains the same – two adults and three children. As I mentioned, not much has changed in the Beetle’s silhouette, hence there is very little headroom and legroom on the rear bench. Hence adults in the back seat won’t feel comfortable after a few minutes of ingression.

Overall the comfort of the seats is spot on for city commutes and the inclusion of a soft suspension setup only makes things better. Add to that the lightness of the steering wheel and you instantly know why the Beetle is such a popular city car. However, the people’s car needs you to drive her like common man/woman would, or else these very facets will highlight their downsides too. For example, the soft suspension setup gives the car quite a bit of body roll when you indulge in spirited driving around twisty roads. The light steering wheel stays light even at high speeds thus making for an artificial steering feedback. Thankfully though, the Beetle wears sticky Pirelli rubber below its bell-bottoms, thus giving you enough grip should you decide to give the body roll a test. Should things start going out of hand there is an ABS with ESP too but the brake pedal needs getting used to. It has a spongy feel to it and the brake bite comes in suddenly, which can be unnerving at times.

Unlike the old Portuguese-imported rear-engine-rear-wheel-drive Beetles that Goa is fond of, this officially launched model uses a front-engine-front-wheel-drive layout. The front wheels are powered by a transversely mounted 2.0-litre petrol engine which dishes out 116PS of power and 172Nm of torque. In case you are an automotive nerd that likes to keep all such figures by heart, then you’ll realise that this combination of numbers points towards the same 2.0-litre engine that the Skoda Octavia petrol was powered with when it was launched in India. In the Beetle, this engine is mated to a six-speed automatic gearbox without VW’s acclaimed DSG wizardry.

Ironically, this engine too sticks to the retro theme of the Beetle and employs decade old technology like a single overhead cam, 2 valves each for its four cylinder layout and a slow gearbox which takes ages to downshift when you suddenly decide to floor the throttle. Nevertheless, the setup is Bharat Stage 4 compliant and quite refined for its age. The Beetle, though a tad heavy for this engine, manages to hit the 100 km/h mark from standstill in under 15-seconds. We managed to extract and overall fuel efficiency figure that was slightly shy of the 11 kmpl mark. A better spec-ed engine, probably a 16V DOHC which can manage a better power to weight ratio, should be able to give better overall performance. But since the sales numbers aren’t going to be too steep for Volkswagen, they might not give another engine option a thought anytime soon.

So is the Beetle worth all the hype and money? Yes and no. As far as the hype goes, the Beetle is worth every bit of it. It is an icon which Volkswagen was forced to bring from the dead due to its sheer popularity. In a country like India, a Beetle – no matter what the age or model – will turn more heads than Mustang or a Phantom can, thanks to its distinctive styling, flamboyant character and strength to withstand the test of time.

As far as the sticker price goes, Rs. 21-lakh sounds too far stretched for a car that runs a decade old engine and boasts of a features list that is shorter than the skirts of most girls who will perch themselves on the Beetle’s seat(s). But you can’t really blame Volkswagen for it. At the end of the day, all these carmakers have to succumb to the ridiculous import duties that our rounder-than-the-Beetle politicians like to levy on such beauties. Would I buy one of these then? If I had the money, yes, I would – for the Beetle symbolises the fact that ‘fat and round’ is still in demand!