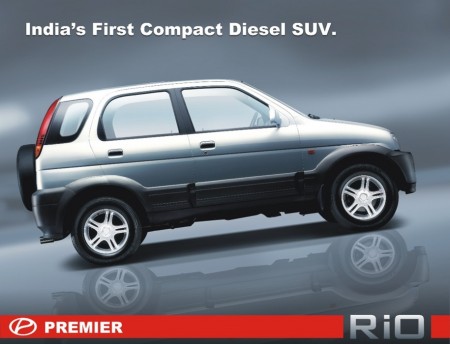 Fiat’s partner in India, Premier Automobiles, is back in the Indian passenger vehicle segment with the launch of its SUV named RiO, in the country today. The car was unveiled by Maitreya Doshi, Chairman and the MD of the company.

The RiO will come in three variants- EX, DX, LX with a price tag starting from Rs. 5.25 Lakhs to Rs. 5.95 Lakhs for the top end version. All three variants will come equipped with Power steering, front power windows and central locking system. Adding to that, the higher spec variant will also come with MP3 Player, ABS and chunky alloy wheels. The SUV also comes with a non AC variant. The RiO will currently come only in the BS III spec. The company has promised to upgrade it to BS IV before the new emission norms become compulsory in April 2010. Color options for the RiO include- Red, White, Silver, Black and Blue.