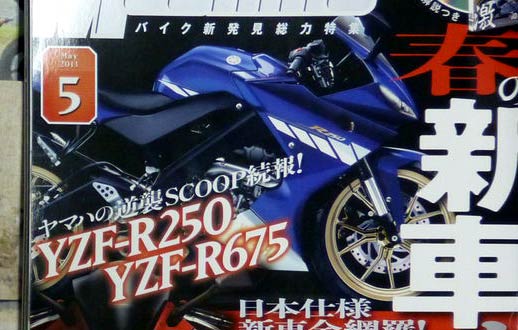 The Yamaha R250 somehow manages to keep itself in the limelight- be it rumours, renderings or official confirmation from Yamaha setting a deadline as to when the much anticipated motorcycle would finally see daylight.

If you can recollect, Japanese Magazine YOUNG had rendered an image of the CBR400RR some time back, which at that time appeared more as a rumour but eventually checked most of the boxes. Now the magazine has featured a rendering of the Yamaha YZF-R250 popularly rumoured as the Yamaha R25, which seems takes cues from the 125cc variant of Yamaha’s track tool- the Yamaha R125. But the surprising part is the absence of a deltaframe aka perimeter frame found on both the 125 and 150 variants- instead what can be seen is a tubular frame. The swingarm seems chunky as is on the present generation R15- and though it’s just a rendering, the USD forks, new design alloy wheels and a larger disc rotor are a delight to the eye.

Mr. Hiroyuki Suzuki (MD & CEO- Yamaha Motor India) had already confirmed that the 250 would be out next year in the Indian market to compete against the CBR250R and the KTM Duke 200. With the KTM Duke 390 nearing its launch and the Honda’s speculated to hit Indian shores this year- we’d say the Yamaha YZF-R250 still makes sense if Yamaha manages to load all the goodies as is visible in the rendering. And we’re not talking about the benchmark handling of the Yamaha R15. The magazine also features the Yamaha YZF-R675, which we feel could be the future Yamaha R6, albeit with Yamaha’s recently showcased 3 cylinder engine.

We really wish the long awaited 250 finally sees form. Biking aficionados are surely in for a treat.