Home News Yet another short video of 2015 Acura NSX Prototype 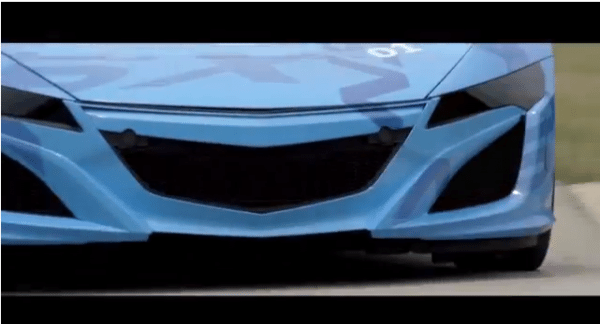 Acura will be seen letting loose a running prototype of the new gen Acura NSX sportscar at the upcoming Honda Indy 200 that will take place at Mid-Ohio on August 4. However, for those few of us, who simply can’t wait to see the new NSX prototype on track, Acura has released a few short films which give glimpses of the new car being driven full throttle on the track.

We have already posted links to two of these videos and seen here today is the third video of the series. The latest clip shows the NSX going all out on the track. And did we mention that we are in love with the sound-note of the new NSX’s mid-mounted V6 engine?

This engine is mated to three electric motor Sport Hybrid SH-AWD. The powertrain sends power to the rear wheels via seven-speed dual-clutch gearbox. The twin electric motors on the front wheels contribute in making the NSX all-wheel drive.

The SH-AWD system will have a combined power output of 400bhp and thanks to the torque from the three electric motors, the car will have supercar challenging acceleratio

Tell us, isn’t it ‘oh-so-exciting’ to see the 2015 Acura NSX going sideways on a race-track? (Remember, you saw it first on Motoroids.com).

Stay tuned for more on the upcoming 2015 Acura NSX.