The RX 135, a legend that followed the RD 350, was a beautiful bike which was first made available in India in the late 90s. The bike was available in some parts of the country until 2005 but was discontinued due to its engine which was not up to the emission standards. The 135 cc single cylinder was a two-stroke unit and produced a power output of 14 bhp and 12.25 Nm of torque. It was available with either a 4-speed or a 5-speed gearbox and had a top speed of about 110 kmph but most riders would not go so fast as the bike got drum brakes on both ends. 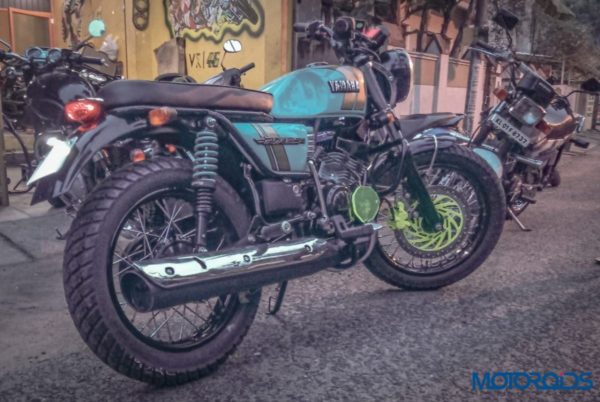 So now more than a decade later, we still see enthusiasts taking care of their old machine and keep working on it to make it better. One such bike was sent to us by our reader, Rohith Hari, who sent images of his friend’s RX 135. Over the years, some modifications have been done to the bike to make it more user-friendly and suitable for the road conditions today. The first was to add some stopping power, which was done by retrofitting a front brake assembly of the Duke 200, while the rear drum is still kept as it is. The chassis has been tweaked to accommodate the new seat and rear mudguard. The bike runs on bigger tyres both front and rear and also gets a custom redesigned tank. 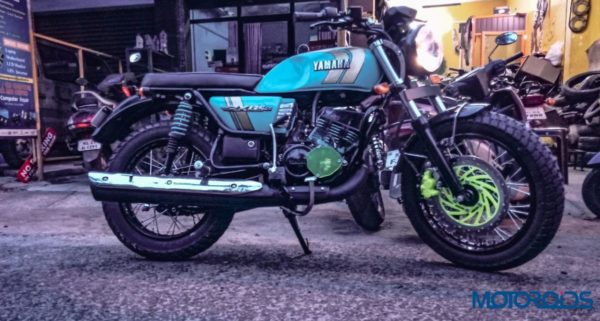 On the cosmetic side, the bike gets custom blue paint with matte gold decals, a fluorescent green accents here and there. The larger tyres are semi off-road tyres giving the bike some ability to go off-road. To further make the bike a bit modern, an instrument cluster and front shock absorber assembly have been borrowed from a Yamaha FZ250. Here are some images for you to look at. Do tell us what you think in the comments below.