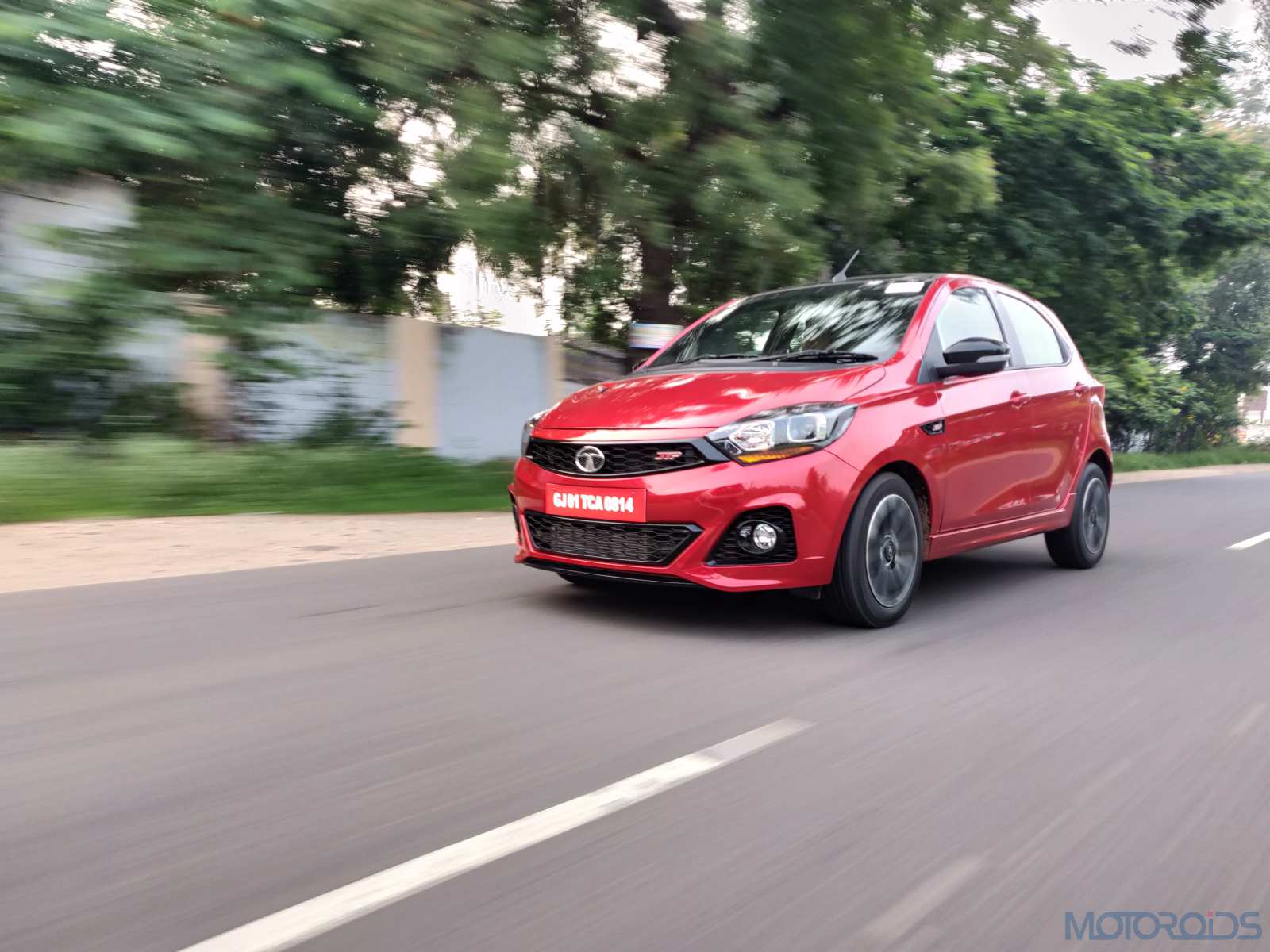 At the very outset, we’d like to clarify, this post isn’t sponsored by Tata Salt. Not by Tata Motors either. And with that out of the way, allow us to tell you more about our charming experience with what is definitely, at that price, the most fun, sportiest, pocket friendly, and possibly the best looking hatchback your dwindling in value, Indian Rupee can buy. We are talking about the Tata Tiago JTP.

A car which is trying to pull out a country and its closeted enthusiasts from their obsession with features and economy, towards a little joy. Towards some of life’s pleasures. And it’s not asking much for it. We’d have given it an award just for that. For doing something different. And it’s not all lip gloss, fancy accent and mascara. The appeal is skin deep. The best thing? You still get to keep your features and fuel economy. How does 10 kpl sound even after the engine has been revved to its limit till the top of a hill? Did someone say 7″ touchscreen? Stop reading now. 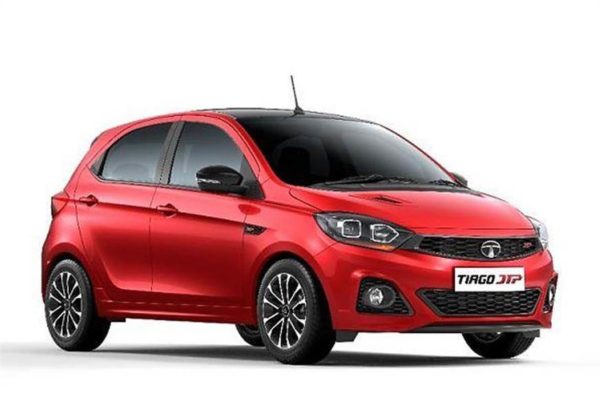 For those still reading, let’s begin with the motor. A 114 horses and 150 Nm might not sound like much. But in a car which weighs just a tonne, it becomes a recipe for fun. To add to that, they’ve tuned the springs to stand straight when you’re bending your neck from corner-to-corner. But they haven’t made it stand so straight that your spine starts complaining after driving it on our kind of roads. Sporty handling? Yes. Uncomfortable ride? No. 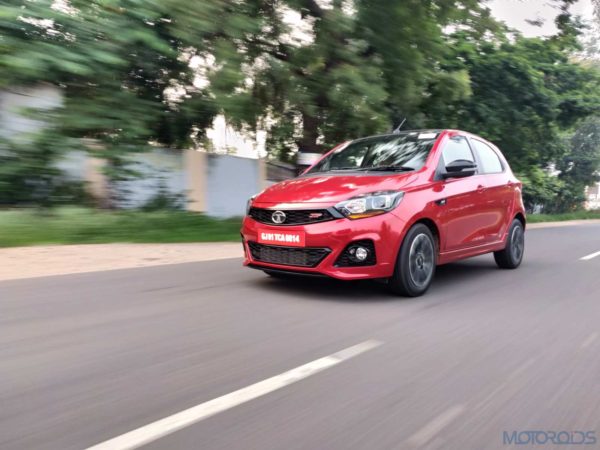 The steering feels alive in comparison to the dead meat we clutch these days. Okay it’s not a hydraulic unit which tells you everything, but it does tell you a lot. It even returns to the center on its own when you have to fetch most others and bring them back to their usual position these days. Is there any torque steer? Not really. But the Tiago JTP is quick off the line. A Made in India, INR 6.5 Lakh car dismissing the 0 – 100 run under 10 seconds! Yayy! 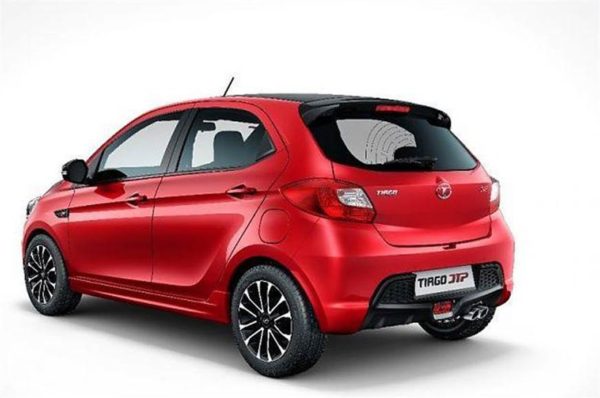 Then there’s the way it sounds. Get off the throttle and there’s that mildest of whistles you hear from the blow-off valve. When you’re hooning it, the intake and exhaust sound come together to liven up the atmosphere inside the cabin. Some say, it could’ve been a little louder. But hey, sometimes you also need to hear what he/she says during those relaxed and quiet long drives. We’re talking about the great sounding audio system and not a man/woman in the passenger seat. Your situation might be different. 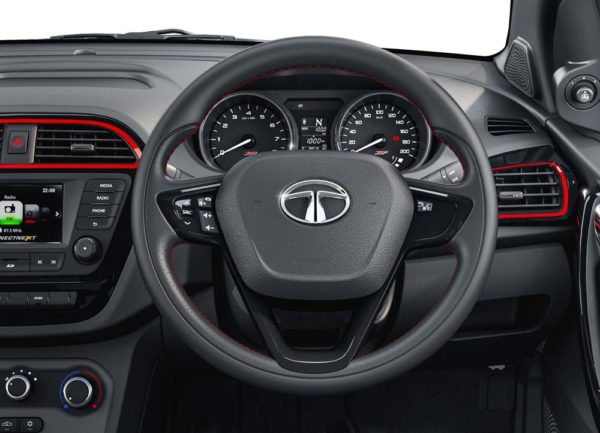 For the way the Tiago JTP handles, there isn’t a car in the same zipcode which can come close to matching those moves (Yes we do hear those distant echoes of someone saying ‘Figo S’). With a pint sized wheelbase, it can swing its waist from side-to-side like the best of belly dancers and if you’re in the mood to test how sure footed it is, the rear will sway to let you know that it knows how to have fun. But sway it will with confidence. Those factory-fitted tyres command a special mention too, for aiding quietly to the Tiago JTP’s abilities. Throw it left, throw it right, point it straight, the Tiago JTP is a sure footed bella with a fantastic BMI. 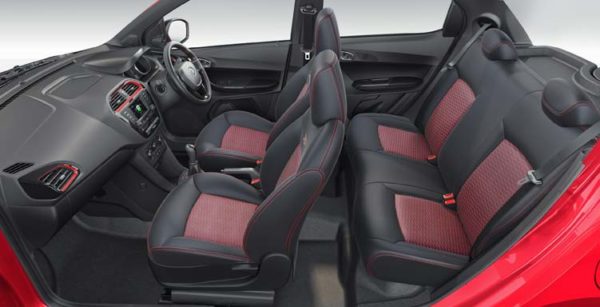 And a Bella it sure is! Just look at those fantastic looking headlights, the blood red paint, and the overall balance and the poise this car exudes even at a standstill. We’re not even talking about those twin pipes, those wheels, and that face. Is there anything missing then? Not if you ask us. But if you ask us to nitpick, we’d say the gearshifts could’ve been more crisp, if the engine could rev till 6,500 rpm, and if there was some mechanically operated, low cost butterfly inside the exhaust which could be shut or kept open to make things louder at will. Oh and if the steering wheel’s rake angle could be made more vertical. 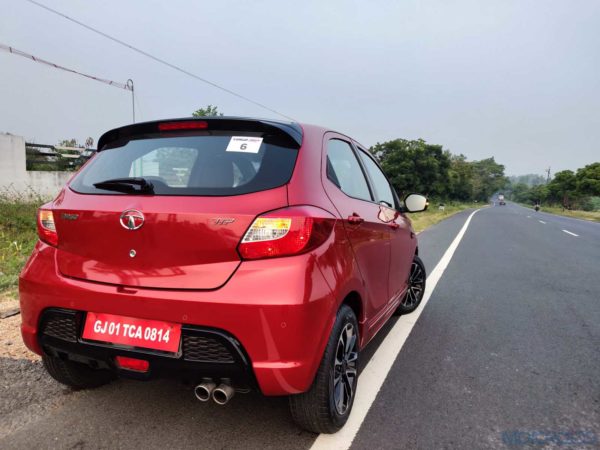 Now, why are we testing the NaCL levels of your enthusiasm? Because this isn’t about the pride of something homegrown. This isn’t about “Desh ka Namak”. We say all this because the JTP twins are genuinely a brilliant and brave attempt which address the needs of a set of people who are in minority when we consider the Indian automobile space. These cars are built for the enthusiast, by enthusiasts. To top that, spares won’t cost much, fuel bills won’t be much either. And they’ve priced it at a point, where the naturally great tasting fruits of performance motoring can also be savored by those who’ve been digging into sugar coated papayas until now. For all those who don’t need much convincing about a great driving experience, all we can say is, if you’re looking for a rush, for less, this is the sweetest sugar on wheels you can buy right now.