Home News Why does Steve Jobs drive without a Number Plate? 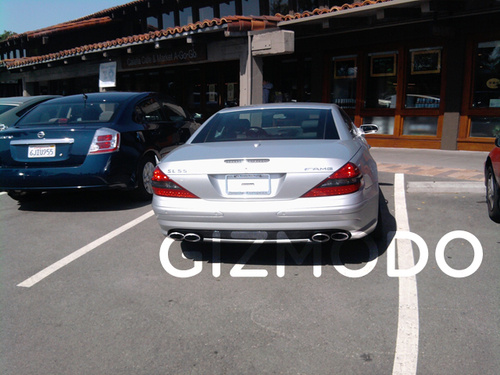 If you are looking for an answer to the above question, well just keep looking then. Because we don’t know why! No one quite knows for that matter.  Except for maybe Steve Jobs. But we love the weird and mind numbing theories surrounding the mystery of the missing number plate on Steve’s 2007 Mercedes Benz SL55 which has been spotted several times on camera.
Few of the Theories:
1. Steve Jobs is developing a new product the – ‘iPlates’ or ‘invisible plates’, and will only put up a number on his SL55, once the ‘iPlates’ have been launched. Well, Steve if you built it, we will buy it. For sure.
2. Steve Jobs has special dispensation from the California authorities to drive without plates to protect his identity.
3. Apple fanboys run away with the tags, every-time they are mounted on the roadster and then worship the items at home.
4. Steve baby does have the number plates but keeps it on his dashboard or glove compartment.
5. There were also some reports which claimed that Steve had special bar- code license plate, but these have been debunked.
6. Steve finds his car exceptionally pretty to besmirch it with a number plate.
7. The SL55 when turned on and is in gear, makes the plate come out of its hiding place and fits itself on the plate holder.
Feel free to add more theories of your own. Maybe, some one will create an iPhone app on it!
News
,
Comments
Leave a Reply Cancel reply