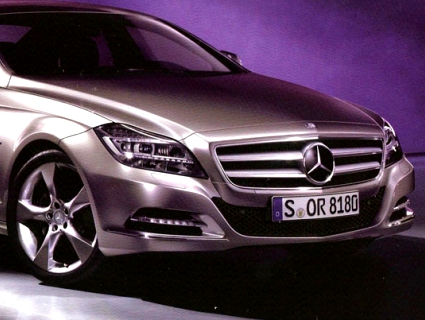 While the official launch of the 2011 Mercedes Benz CLS four door coupe is still some time away, the brochure images of the stunningly beautiful car have leaked onto the internet – much similar to the way they did for the current E-class. The blokes at eMercedes-Benz got their hands on these images a few hours and ago as you would expect, they have spread around like wildfire!

The images show the CLS from all angles, inside – out. The car, as expected, looks very similar to the ‘Shooting Brake’ concept that Mercedes Benz had showcased a while back. The new headlights get a plethora of daytime running LEDs which also section off the upper, dipper and turn blinkers. The generous use of LEDs is carried over to the tailend too as is evident with the taillights. To us, the tail looks too sedan-ish and not at sweeping, coupe-like like the outgoing CLS.

Inside the car, the CLS continued to extend its centre console all the way to the back bench, leaving space for four occupants only. The equipment list will be a mix of features coming from the successful E-class and the top-of-the-line S-class. Engine options will come in the form of a 3.5-liter direct-injected V6 and a twin-turbocharged 4.6-liter V8, good for around 430 horsepower! The car is expected to debut officially at the 2010 Paris Motor Show this October. We expect the car to go on sale in India in the second half of 2011. The AMG version will follow suit by Q1 2011 for the European market and probably a Diwali 2011 launch for India. Stay tuned to Motoroids as we bring you more info, official photos and specs of the 2011 Mercedes Benz CLS AMG as and when its available to us…