Honda Two-wheelers India recently teased a brand new motorcycle which will show itself in all its glory on 27th August. Though the Japanese manufacturer has been tight-lipped about the specific details about the motorcycle, the think-tanks of our automotive industry are speculating it to be a 200cc variant of the Hornet 160R which still hasn’t received a BS6 upgrade while the other 160cc motorcycles in Honda’s portfolio including the Unicorn and the X-Blade have already been updated to meet the BS6 norms.

Why a 200cc motorcycle makes sense for Honda

The maker released a new teaser video which showcased some of the bike’s details amidst a track-inspired theme. The highlight of the new 200cc motorcycle seems to its sharp and edgy styling which will help Honda to take the fight in the 200cc camp which currently includes the likes of Bajaj Pulsar 200NS and the TVS Apache RTR 200 4V.

The reason why we are betting on a 200cc motorcycle is because CB Hornet 160R has not yet been launched in BS6 trim and the X-Blade BS6 now being Rs 17,000 more expensive than the BS4 model, a larger 200cc bike seems logical. Honda is currently absent from the 200cc segment so the new motorcycle will mark the maker’s entry in this highly competitive segment. Honda patented the CBF 190R for India last year and the new motorcycle will be largely based on that only but we can expect Honda to implement some changes to it so provide a more upmarket feel.

As it is pretty apparent from the teaser video, Honda is largely banking on the styling and performance of the new motorcycle. And the snippets of the motorcycle that we got to see in the video, it seems pretty sharp and the edgy styling will certainly assist Honda in stomping its feet hard on the 200cc ground. The bike gets large fuel tank extensions with a 3D Honda emblem as well as an engine cowl. The front is highlighted by a sharp-looking LED headlamp unit. Other highlights include a fuel tank-mounted ignition and a flush-fitting aircraft-style fuel filler cap.

The motorcycle showcased in the teaser video was donned in a premium looking dual-tone blue and grey colour scheme which further works in contrast with the gold-finished USD front forks. While the Hornet 160R fell on the more affordable side and its build quality was nothing to write home about, we can expect the new 200cc motorcycle to have a more upmarket feel.

Though there is no word regarding the powertrain, it does look like an air-cooled unit. Honda could borrow the CBF190R’s 184cc single-cylinder air-cooled motor that delivers 16.86PS and 16.3Nm. But if Honda really wants to take the fight up to other 200cc motorcycles, it will have to boast of at least 20 hp of power on paper. 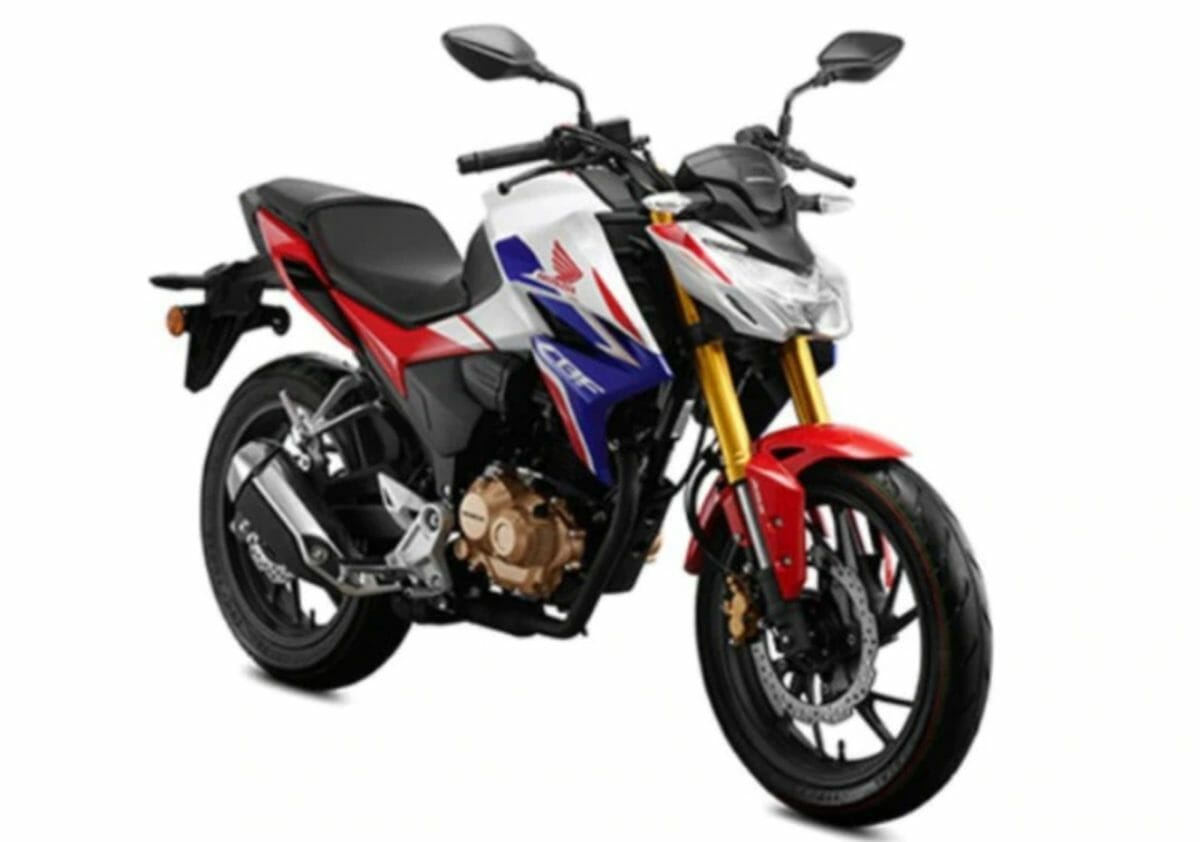 The current crop of 200cc motorcycles make more than 20hp of power and given the track-focused theme the teaser video had, we believe in Honda to deliver the performance matching the motorcycle’s sharp looks.

The gold-finished USD front forks hint at the sporty intent of the motorcycle and we believe that the motorcycle will have improved riding dynamics. For instance, both the Apache RTR 200 4V and the Pulsar 200NS make do with telescopic front forks. The new 200cc motorcycle is also expected to have optimum braking performance, courtesy the petal disc brakes showcased in the video. It also gets a blue-backlit display for instrumentation with an additional gear position indicator.

The upcoming 200cc motorcycle from Honda has already created quite a buzz in our motorcycling industry. All the details will be revealed on 27th August. That day, we will know whether Honda has a winner on its cards or not and going by the looks of it, it looks like a promising proposition. Expect the pricing to hover around the INR 1.4 Lakh mark.