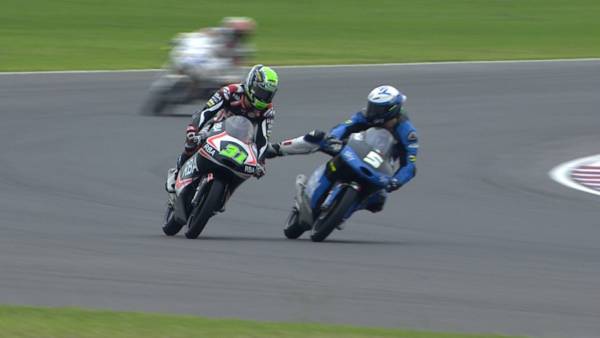 At the recent Moto3 race held in Argentina, Italian racer Romano Fenati displayed a burst of hot temper and un-sportsmanlike conduct towards another rider that garnered him three penalty points.

The incident happened during the morning warm-up when Fenati, for reasons yet unknown, kicked out at Finnish rider Niklas Ajo. As you can see in the video, Ajo remained calm during the incident, and chose not to return the favor. Then at the end of the warm-ups,  Fenati, still furious, switched Ajo’s bike off as the latter prepared to make a practice start. As Fenati and the other riders rode off, Ajo’s reaction can only be described by the gloved middle finger he held up to the disappearing rider. 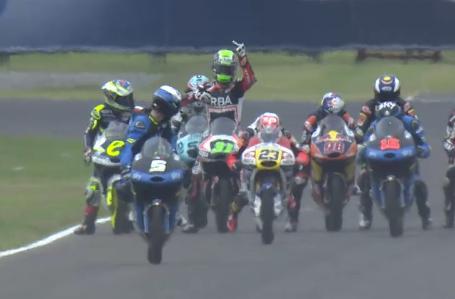 It is still unclear what caused Fenati to break out in such a rage during the warm-ups. The marshals, unsurprisingly punished Fenati, rewarding him three penalty points, which meant a back of the grid start. Fortunately Fenati helped put the controversy behind him with a strong ride to eighth. “It was a great race with an enthralling comeback. Unfortunately I made a mistake during the warm-up, I admit I went a bit too far and I am sorry about it,” Fenati said in a VR46 statement. “First of all I would like to apologise to Ajo and his team. But I also apologise to my team that has worked well all the weekend long and certainly did not deserve to get away from the last spot.”

“We will also try to improve at psychological level to check impulsiveness. It was a false step we paid dearly, but the bike was okay and I managed to push hard and fight back and I am very happy about it. We have a good basis on which to build on ahead of Jerez,” the Italian added.

Team manager and former racer Pablo Neito added: “First of all we have to apologize to Niklas, incidents like this should never happen, not even when there is so much adrenaline involved. We made a mistake, but the most important thing is that Romano acknowledged it by apologising. “Nonetheless, it was a great race as Romano started last but was able to finish in the top 10. I congratulate him, even if I am sorry about what happened in the warm-up, as if we had started from the third row we might have got farther ahead.”