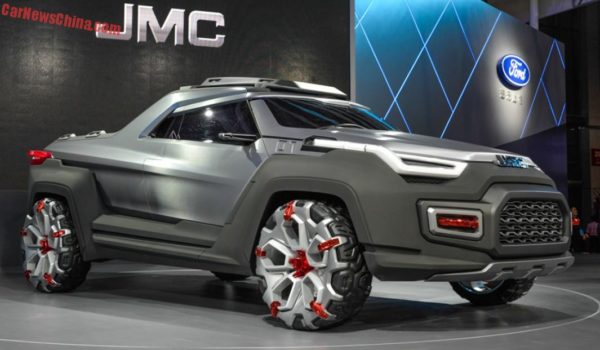 The Shanghai Motor Show has to be one of the most confusing motoring event of all time. Why? It is really difficult to differentiate between an original design versus a rip off. The Land Rover Evoque SUV for example. China made Land Wind X7 was a near rip off of the British luxury SUV. At times, Chinese manufacturers combine the designs of two different models from two manufacturers to deliver one product of their own. Another example of the Chinese shenanigans is the Suzhou Eagle from this year’s Shanghai Auto Expo which is a combination of Porsche Cayman and the Ferrari F12 Berlinetta. The list runs long!

The 2015 Shanghai Motor Show is underway and the Chinese car makers are back at doing what they do the best – drawing “inspiration” from international car brands for developing new products that are not likely see the tarmac of any another country. But we would skip this pick up truck concept from the list. Jiangling Motor Corporation or JMC has joined hands with Ford Motor to produce Ford-branded commercial vehicles and SUV’s and the Chinese manufacturer revealed the new Yuhu concept at the 2015 Shanghai Motor Show.

This futuristic concept showcased at this years Shanghai Motor Show receives in dual colours paint job in two shades of grey. A single piece cladding covers the front of the vehicles and runs over the wheel arches and sides to give this concept SUV a rugged and muscular look. The LED headlight extends to the sides, well above the front wheel arches. A JMC logo sits between the headlights. But the most interesting and attention grabbing part of the Yuhu concept SUV are the wheels. The alloy crosses over to the wheels which is a bit of surprise. Ventilated disc brakes are visible through the cavities.

JMC also happens to owns the controversial Landwind brand which is responsible for the Range Rover Evoque lookalike X7 SUV. Here are some more images of the SUV. Share your views about the JMC Yuhu with us through the comments section below.