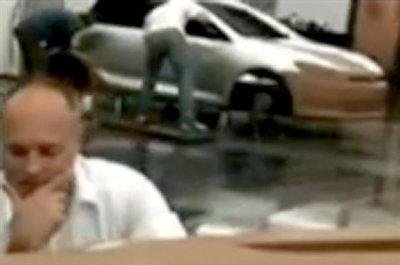 Some say, it was accidental. Some say it was deliberate. All we know is that it was sensational news. VW’s next generation, Mk VII Golf was revealed during a company promo video. At the Frankfurt motor show, VW showcased a film about its L1 concept car, but in the background, you can clearly see people working on a full size prototype of what is, without a doubt a VW Golf. Although the scene was quickly cut out of the video, we surely got an eyeful. The upcoming Golf has slim aggressive headlights and nice, meaty integrated wheel arches. True to VW’s tradition it is an evolutionary design rather than anything radical, but it surely looks much more understated and classier compared to its rivals like the upcoming Focus and the new Astra.