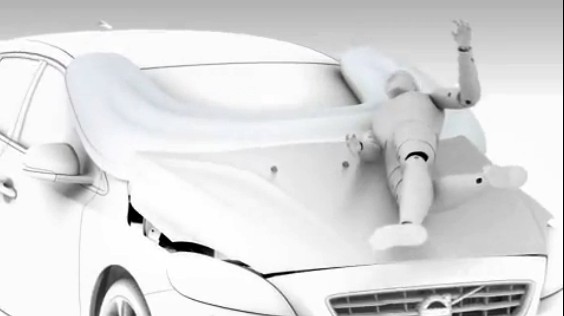 Days ago Volvo unveiled their V40 hatchback, the most modern weapon in their arsenal, at the Geneva Motor Show. The hatchback portrays the youthful new design language that the Swedish carmaker has adopted. Apart from infusing some excitement into the brand, the new V40 also boasts of a world first technology. The Swedish carmaker, known the world over for its safety technologies, has equipped the V40 with world’s first pedestrian airbag system.

The technology features an array of sensors in the front bumper which register the physical contact between the car and the pedestrian. The bonnet flips up slightly on detecting the impact, to make the pedestrian slide up, rather than bang into the windscreen. At the same time, the newly incorporated airbag gets inflated to cover the area under the raised bonnet plus approximately one third of the windscreen area and the lower part of the A-pillar. The raised bonnet and airbag are designed to reduce the severity of pedestrian injuries.

You may think that Volvo is going too far for safety, but that’s how the Swedish firm has been for ages – doing things which sound ludicrous to others. It’s a different story that everyone adopts them eventually.

But pedestrian airbag isn’t the only highlight of the V40’s safety net. Here’ the complete list of features you can see on the new car.