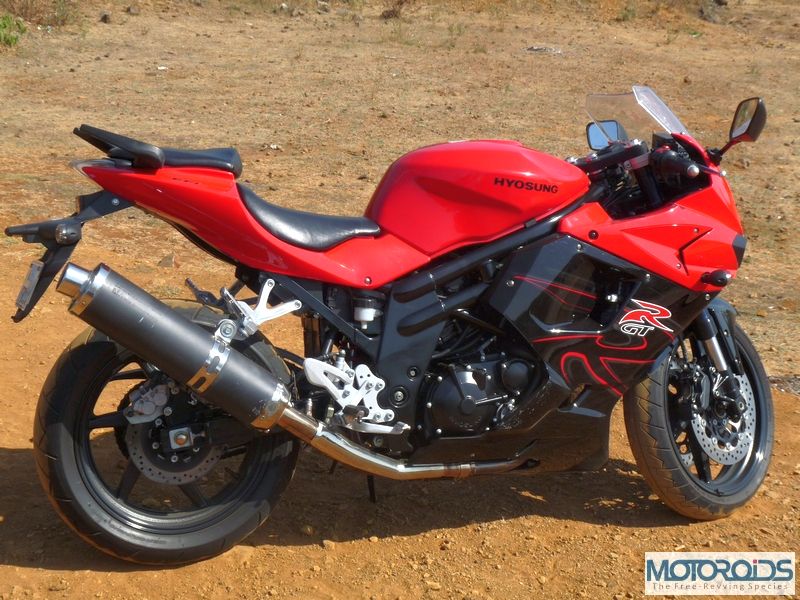 Popular Korean bike manufacturer Hyosung partners with Garware in its Indian operations with the latter taking care of the sales and services part. Today, the Hyosung-Garware alliance sells the Hyosung GT650R, the GT650N (naked) and the ST7 Cruiser in India. It may be noted that all these bikes retail for more than INR 4 lakh and hence, the manufacturer caters to a minimal section of Indian bikers. About a decade back, Hyosung had tied up with the now defunct Kinetic to sell a 250cc twin cylinder naked street bike christened the Comet. A bike, which still has a fair bit of fan following in the country! When I was in high school, my dream bike used to be my cousin’s Karizma. It was back then when I had a little rendezvous with the Comet and it will be an understatement to say that I was completely bowled over by it. The bike had speed and acceleration that outshone the then performance leader, the Karizma by a huge margin. The only aspect where it lacked was handling. Those Comet days constitute a part of many fond memories of those days. Coming back to 2012 and Comet is a thing of the past. I fancied reviewing the GT650R’s ever since it emerged on the Indian horizon. A call to my editor, and there I was, wearing my riding gloves with my hands itching to have a go on the red & black GT650R. Here’ is a quick review of the bike, based on my short 100km ride on the machine. 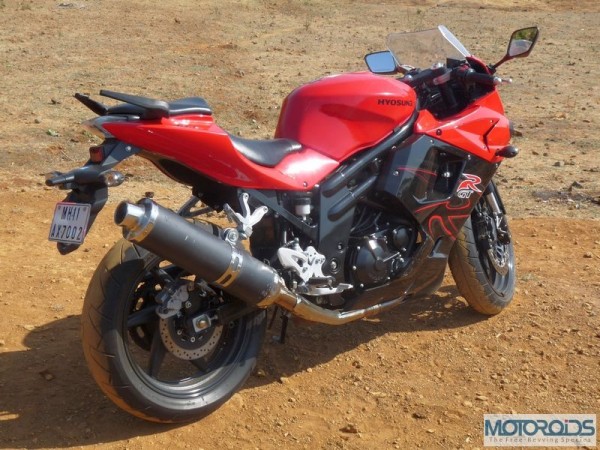 One look at the bike and you will know that this certainly is a ‘biggie’. Full fairing, fat tires, clip-ons, digital speedo console, everything looks the part. The bike has a gigantic front tank, an upswept end can that reminds me of the one on the Pulsar 220F street bike, big chunky grab rails and a very sharp tail unit. The vertically stacked twin head lights again remind me of the P220. The graphics on the fairing are tastefully done.

The very muscular fuel tank has well sorted knee recess that merge very well with the design. The tank has an air craft type fuel cap that is finished in high quality brushed metal. However, the thoughts of the Pulsar 220 come back to mind the moment I saw that the tank on this Korean bike had no belt/zipper guard to protect the paintwork. Goes on to say how something very inexpensive and simple makes a difference. What the tank has is the Garware insignia. The quality and finish of this sticker isn’t too great and look like an afterthought. 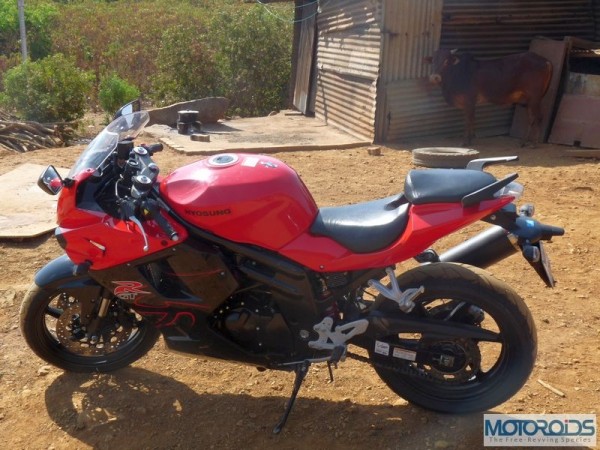 Talking about the side profile, the bike continues to look like a last generation litre class contender and the graphics on the fairing are certainly a neat touch. The rear and side panel are integrated into a single panel, much like the Karizma. In profile, the tail + side panel combo looks good. However, the tail-lamp unit, and the rear end of the bike looks much sharper when viewed from behind. The side penal also has a keyhole between the two seats to unlock the rear seat and gain access to an undersear storage compartment. Talking about the rear, I will mention about the very smart tail end again. This piece screams ‘sportsbike’ and has a LED tail lamp incorporated into it.

Overall, the design may not be ground breaking but still manages to make a strong impression. I was quick to lose count of the number of times other road users asked us if this bike was a Hayabusa. While the bike doesn’t quite look anything like the busa, it is only a good thing that people associate this Korean contraption with that big bad machine. 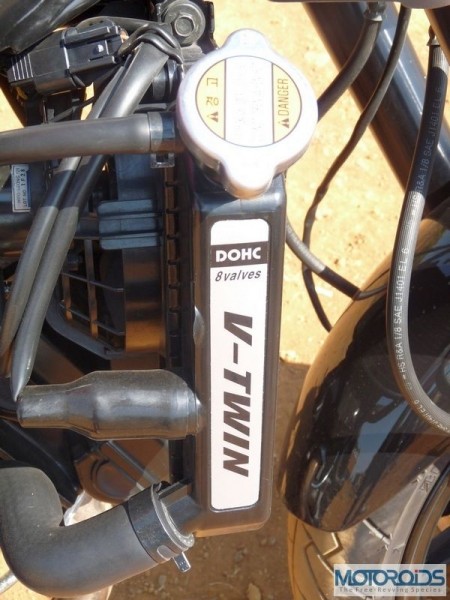 I will be very frank here. I am the kind of guy who hardly cares about the way his car/bike looks. Who cares when you can go fast enough for anyone to see you? As our regular readers might know, I use a Bajaj Pulsar 220 DTSi on a daily basis. That would ideally have made switching over to the GT650R one heck of an upgrade. But did it, actually?

First things first, this or any 650cc bike cannot be compared with an Indian street bike and let me make it clear that this Korean bike is light years ahead of my daily ride. Still, I wasn’t quite bowled over instantly with this 650. Sure, the GT650R manages to get past 80km/h mark in the first gear, but it didn’t quite give me the thrill I was expecting from it while riding through the city streets. The power reservoir is higher up the revs, and I was expecting some more juice below 4000 rpm, a region where the bike feels rather lethargic. Just to test its driveability within the city, I tried engaging higher gears at slow speeds, but the results weren’t quite favourable. 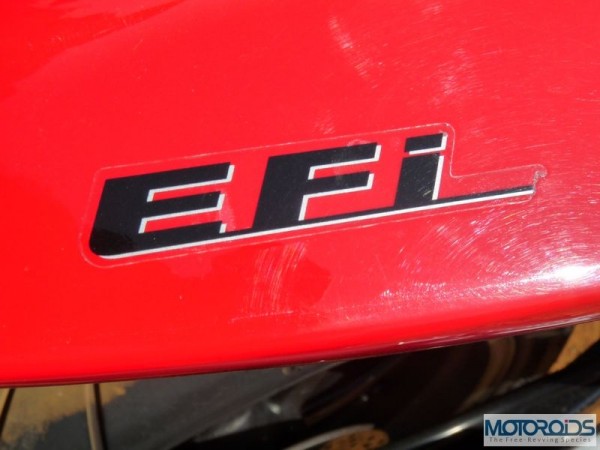 The real punch with the GT 650R can be felt only when you enter mid revs and the bike suddenly starts feeling very eager to gain more speed. Although I was not carrying any test gear, but I have a feeling that the bike should hit 100kmph in a quick 6 second. You have to keep the revs high to extract the most out of this machine. It is only after above 4500 RPM that the bike feels like a 650cc should. It may be noted that a lot of vibes creep in the moment you cross 7500 RPM on the speedo and they cease only after you are well past the 8500 RPM mark. I remember seeing 160kmph on the speedo and worth mentioning is the fact that the bike felt very stable and comfortable at such speeds.

Although I did not try it, but the Hyosung did feel capable to nudging the 200km/h mark given a long enough open and flat straight. As I mentioned earlier, it feels well planted and under control even at those high speeds. I should not be wrong to say that the trellis twin spar steel frame is responsible for most of that poise here. Overall, I have mixed feelings about the performance of this bike, most of them being positive. The GT650R is surely a capable highway cruiser, but it leaves something to be desired if you are hoping for Yamaha R6 like thrills. 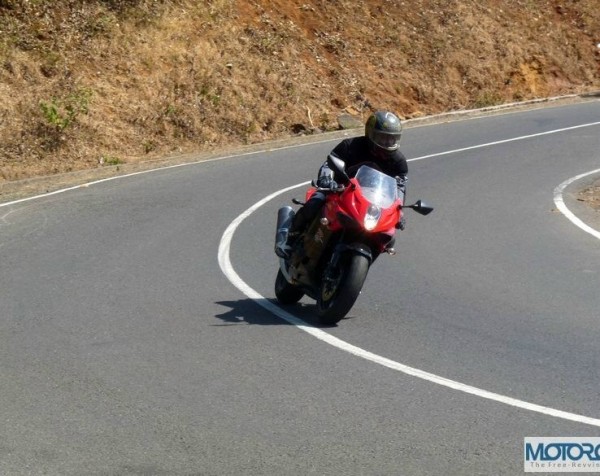 Now this is my favourite bit! I have always maintained that all the power from a car’s or bike’s engine is useable only if the vehicle is able to put it down on the tar with good manners. As mentioned above, the GT650R comes with trellis-type twin spar frame. Talking about the suspension, the bike features adjustable inverted telescopic forks up front and an adjustable Progressive Linkage Hydraulic mono at the rear. The 17 inch wheels come shod with 120/60 tire (front) & 160/60 (rear). Twin 300mm discs with 4 calipers can be seen mounted on the front wheels and the braking duties at the rear are courtesy 270mm twin calliper disc. The GT650R I tested was wearing Bridgestone Battlax rubber and it has to be among one of the best tire set I have ever used. It may be noted that even the Ninja 650R comes with Battlax tires.

The ride quality on this bike is quite good with the suspension soaking in most of the average sized craters without causing transmitting those jolts to your back bone. However, beware of the deeper craters as the front, in typical sportsbike fashion, easily bottoms out on our roads and threatens to make life real miserable for the front mudguard. 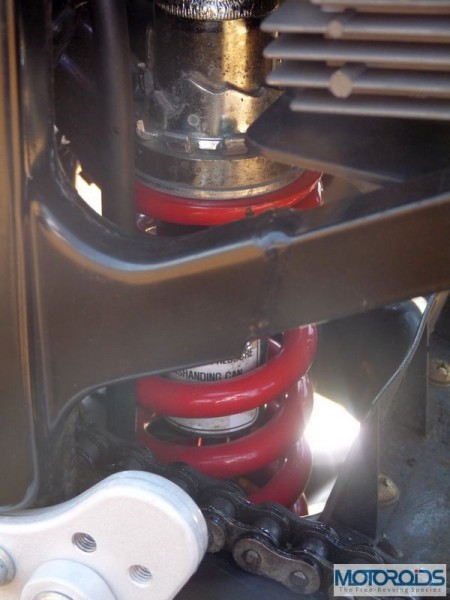 Talking about the handling, it will be an understatement to say that the bike handles pretty well. Having ridden the Comet earlier, I found the GT650’s poise around bends as several notches above any other Indian bike I have ridden. The GT650R is one of the better weapons we have here in India to go apex hunting with. Track is where this bike belongs. Well, almost.

Just when everything seems to going right for the Korean bike, braking is what fails to leave a mark on you. While there is no denying that on paper, the bike seems to possess some heavy duty anchors, the way they function leave a little more to be desired. Sure, this 650 can shed speed from triple digit speeds but, the brakes lack the bite and feel you expect from this sort of a machine. It is only when you really squeeze the life out of the lever that the callipers swing into action and perform as they are supposed to. Not the most confidence inspiring bit on the bike I must say. 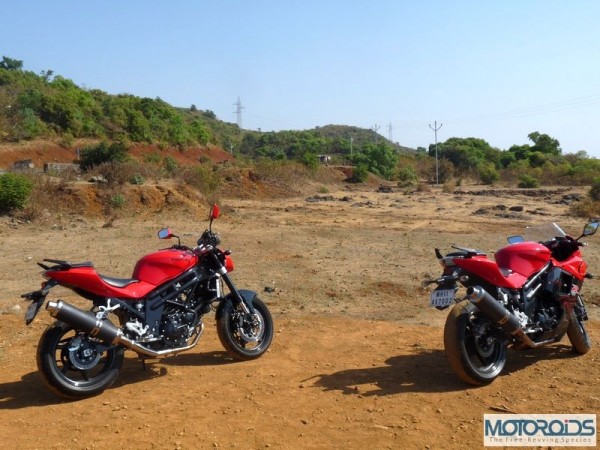 Hyosung GT650R is the first 650cc bike that came to our shores. In that sense, it’s quite a pioneer for the Indian market. The launch and relatively lower pricing of the Ninja 650 may have spoilt the party for this 650, but it still holds its own against any of its competition.

There is not an iota of doubt that the bike’s styling will get you many admiring glances from people of ever age, gender and class. It’s got the performance to intoxicate you, and it handles reasonably well too, so you can head out to some winding roads when you wish to feel like Lorenzo. Garware’s sales and service network is an issue, but apparently the company is working hard on expanding it.

Having said all that, the GT650, even after being an incomparably superior product to any of the Indian bikes, can surely do with some fine tuning in a few areas before it really match the offerings from the globally better known bike makers. It is, however a very good standalone product, and should be able to give you the exclusivity, performance and thrills you want from a bike in this segment.