Volkswagen has begun testing the Tiguan premium compact SUV in India. Recent spy shots reveal two uncamouflaged test-mules of the model that were spotted for the first time in India during a public road test. Reports suggest that the German automobile manufacturer was testing the Tiguan on the outskirts of Pune, probably somewhere near the company’s Chakan facility. 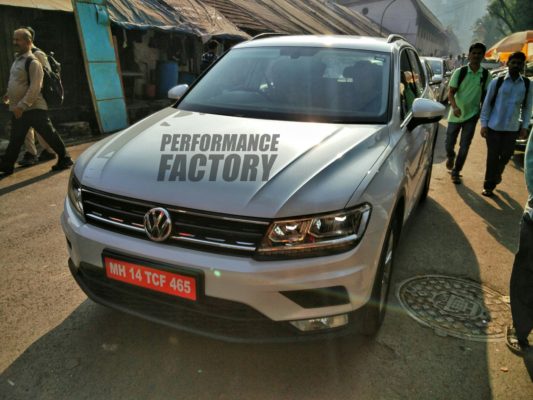 The new Volkswagen Tiguan made its Indian debut at the 2016 Auto Expo held in Greater Noida. The Tiguan is the first SUV to be based on the company’s MQB platform, making it lighter by over 50 kg over previous generation model. It is also the first SUV from the manufacturer to feature LED headlamps.

Visually, the Tiguan features a twin slat chrome grille flanked by an LED headlamp cluster with integrated LED DRLs while at the rear are LED tail lamps with a 3D effect glass. The Tiguan rides on 18 inch diamond cut alloy wheels.

Inside, the premium compact SUV comes equipped with a 12.3 inch Active Info display instrument cluster, electric 4-way adjustable lumbar support and massage function for the front seats, along with the largest panoramic sunroof in its class. Also on offer is a 5 inch non color infotainment display as standard while an 8 inch touchscreen infotainment system is available as option. 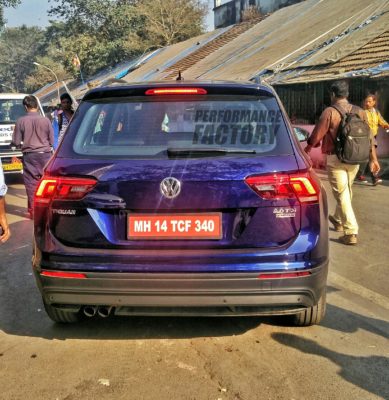 For the European market, the Tiguan can be had with a 2.0-litre TSI petrol engine and a 2.0-litre TDI diesel engine. The former is capable of producing 177 bhp and 320 Nm of torque while the latter is tuned to produce 148 bhp and 340 Nm of torque. Transmission duties are likely to be taken care of by a seven speed dual clutch transmission. A front wheel drive system will be standard for the base variants while a 4MOTION AWD drive system will be offered on higher variants.

Following is an image gallery of the Volkswagen Tiguan spied testing in India: