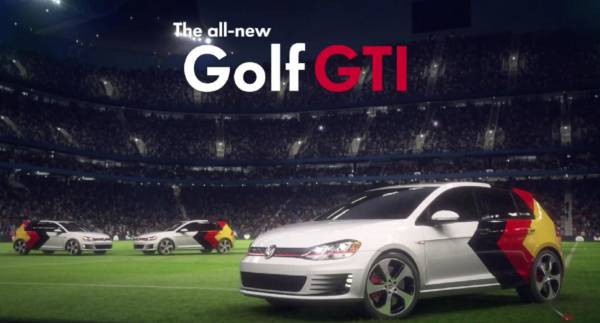 Unless you stay under a rock, Germany lifted the 2014 football World Cup yesterday- after 24 years of being denied one. 22-year old Mario Gotze slid one in at extra time, trouncing Argentina 1-0, ending what has been one of the most charged World Cups in recent years. But that’s enough football-let’s go back to cars.

Imagine a bunch of German livered VW Golf GTI hot hatchbacks on the turf, chasing the ball and one just puts one through the net like Gotze did last night, much to the German crowd’s euphoria.  Are we crazy? No, that’s exactly what Volkswagen has done in their latest commercial. As a celebratory measure, Volkswagen replicated the moment from an automotive perspective. Of course, everything is computer generated but it makes for an impressive spot. “Gotze” GTI here, revels here in style after putting in the goal, but is shown the yellow card for being too blatant we guess.

The all-new 2014 Volkswagen GTI will be offered in two versions- a 220 HP regular and a 230 HP Performance variant. Both will be powered by turbocharged 2.0-liter petrol engines and will have a peak torque of 258 lb-ft. The 0 to 62 mph sprint comes up in 6.4 seconds for Performance and 6.5 seconds for the regular.